There has been much in the way of heated debate on the subject of the mesh parametric deformer and standard sizes for avatars of late. So much so that in this week’s Metareality podcast, Kimberly Winnington (Gianna Borgnine in SL), deformer coder Karl Stiefvater (Qarl Fizz in SL) and in-world content creator Cathy Foil discussed the debate at some length and touched on other aspects of the deformer project.

The following is a summary of the core aspects of the discussion, presented in the panelist’s own words. My thanks to Kimberly for allowing me to produce this piece. 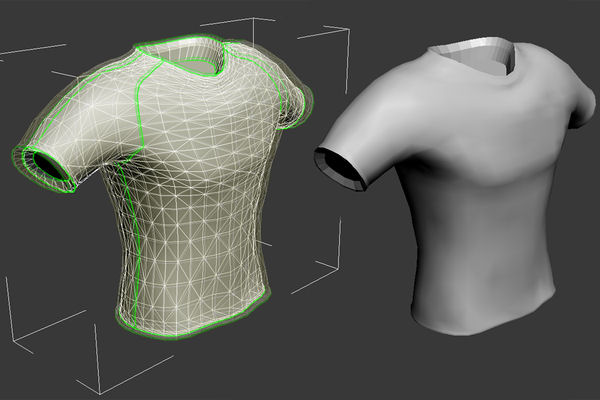 [2:10] Kimberly Winnington (KW): As it stands now, mesh items have to be built to the default avatars like the Ruth Avatar and then be deformed.

[2:32] Karl Stiefvater (KS): There’s a slight difference between Ruth, the actual Ruth – a lot of people call different shapes “Ruth”,  so that’s a bad term to use – and the important shape, the one that you get when you say, “Hey, I want to do a shape!” and you don’t touch any of the other dials … and I call that the “default shape”.

[2:58]  KW: So as it is now, clothing has to be built to that default shape before it can be deformed.

[3:05] KW: And it’s been suggested it should … that group of things like the default avatar should include some sort of standard size as well, even though that’s not officially a feature at this time.

[3:22] KS: That is correct. The rationale there is the deformer isn’t perfect and if you start with a shape that’s closer to your end shape before you actually tweak it, you can get superior results … Even if the deformer worked perfectly, when you design a shirt with a floral print … and you put it on someone with their body weight turned all the way up … the floral print is going to be distorted … So with the new system, the artist could say, “I’m going to repaint that floral print so it doesn’t get stretched out.”

[4:19] KW: There’s this fight going on. Emma Gilmore, also known as Elie Spot – she is of course on the standard sizing side, she was one of the people who worked with a bunch of other designers and came up with the standard sizes. And then I guess on the other side of the argument is Maxwell Graf … he’s on the side that the standard sizing is a marketing ploy and is awful and we shouldn’t even tolerate its existence. And I guess I’m somewhere in the middle of those two arguments on the basis I kind of agree with the standard sizing – not as the official solution because I don’t want to change my avatar …  so I’m all for the deformer and do not want to have standard sizing as the only solution.  However, I would have a much better chance of fitting into something without a lot of stretching if I stretched from a size that was closer to my avatar than the default avatar …  But I still think that it’s at least a solution that should be discussed; where the starting-off point for the deformer should maybe be closer to a standard size.

[7:15] KW: The other thing that came up was … Emma was talking to you about possibly having a way they could convert current meshes without having to re-upload, and you had suggested to her that she post on the JIRA and get some feedback from some other people. So the problem became she posted on the JIRA and she posted a Plurk about both these issues. like let’s discuss where we should start from and lets talk about whether we should be re-uploading or converting and how should we do that … So it started this huge fiasco where everybody kind-of attacked her both on the JIRA and totally all over Plurk, and were like, “you’re wrong, you shouldn’t be posting here…” … I actually agree with her and think she has a good point; but whether you agree with her or not, the topics she brought up are important for us to discuss as a community, especially designers and people who want to wear mesh. Because once the thing is final – you know how things go in Second Life; it will come out and everyone will be unhappy with it but it will be too late to do anything about it. So you have to do it now …

[9:59] KS: The deformer isn’t perfect. There are problems and what she’s proposing … is an extension … so it doesn’t take anything away from what you had before; it’s just adding new features. So how can you hate something that has everything you want but has this extra thing that somebody else wants? How does that engender white-hot hatred? I don’t understand.

[10:36] KW: I think there’s two things. I think the first on is not understanding that it works in collaboration with the deformer. So I think there’s a lot of people…they hear “standard sizing” and they are automatically like, “No”, without understanding that it’s not going to work like standard sizing is now … that you have to fit to that standard size.  This is just in collaboration with the deformer, and I almost want to name it something else….

[11:14] KW: The other thing that comes up is that a lot of people feel like that if we make a solution that fits … then Linden Lab will stop trying to think about trying to create a new overall avatar mesh.

[11:47] KS: I don’t thing that we’ve forced them to do anything ever … They’ve never given in, ever! So I don’t see that as a smart strategy … One thing I want to add to this, tho, is this other aspect  that I don’t think anybody knows about. And that is, Linden Lab, internally, is … struggling with a question that is probably going to delay the deformer even more. And that is, they don’t know if they like the default avatar as the base. They think there might be a better base. … Then the question is, so how do you pick a better base? Some of them are suggesting … that adding curves is easier than removing curves, so if the base was something that had no boobs, that had no curves or shapes whatsoever, that might perform better … But they have no system in mind for making this call. So this is like one of those objections that can never be necessarily resolved, which is very dangerous for the project. So one of the things I like about this alternate bases idea is it neutralises this potential problem, because if they think there is a better base avatar, we can just add it later. As soon as they decide what that perfect base is, we’ll just add it to the list. So it’s beneficial for reasons completely unrelated to the whole fight right now, so that’s something to keep in mind. That’s mainly why I’m sort-of leaning this way … because it kills two birds, and one of these birds is otherwise potentially project destroying.

[14:23] Cathy Foil (CF): Is it possible to have the content creators load-up their own custom bases for their mesh? Would that be possible? Or would they have to create their own blend shapes so they work with the sliders?

[14:40] KS: No … they would have to use the existing shapes, the existing parameters. But they could specify their own set of parameters; that’s doable, but I’m a little bit afraid that that’s over-designed … so I think that maybe down the road that’s a good option, but I think for right now just a set … just six or seven different bases….

[15:16] CF: I did have a wackadoodle idea I wanted to put forward. I know it’s probably way too late in the development … right now you have the avatar mesh is driving the deformer of the mesh clothing, and I thought of the idea of having “deformer underwear” so to speak,  an invisible mesh that you wear so that the avatar’s mesh deforms the underwear but then the underwear deforms the clothing mesh … so that the designers could create custom underwear that would only fit over certain parts of the avatar if they wanted or they could have more vertices in the underwear that would spread out the deformer so that they would deform the clothing mesh maybe a little bit more evenly.

[16:08] KS: That’s a clever idea … but no it’s too late for that! [laughs] But that’s interesting and that could definitely be in version 2 … Then clothing could work on avatars that are completely alien, you know, something you couldn’t dial around … like an elephant .. you could create an elephant avatar and then your hoodie or your dress would fit…

From here, the discussion moved out to talk about design techniques before moving on to the remaining topics of the podcast. For those interested in the mesh deformer and the ongoing debate, I thoroughly recommend listing to the podcast in its entirety, which also includes issues such as DMCA, copyrights and a discussion about the use and impact of the SL Marketplace.