So, amidst all the kerfuffle around SL maintenance yesterday, an e-mail arrived announcing the next “exclusive”  gift for Premium members …. a railcar… 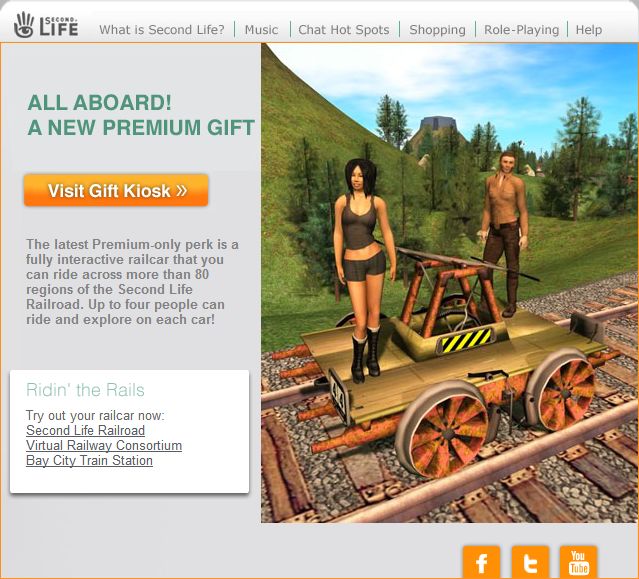 I’ve been ambivalent as to the nature, purpose and value of these “gifts”, and still remain so now. Sailing around Blakes Sea in the last gift was fun, I have to admit – albeit relatively short-lived (the boat hasn’t seen the light of day since; not even on the river flowing near to my Linden Home & which wends through a number of regions). I’m still very much of the opinion that there are better ways to offer incentives to get people signed-up to Premium. However, the railcar.

I’ll admit, things didn’t get off to a good start. I had issues teleporting to recommended start points, repeated crashes on arrival, and then rezzing issues for the car itself, all of which I put down to the aftermath (7 hours after the fact) to the overnight maintenance, but which nevertheless left me grumpy.

The car itself is a mesh creation – as with the sailboat – with a land impact of 42. It’s the work of Silent Mole, and very well detailed. On rezzing the car will automatically snap-align to any nearby compatible tracks (or tell you none are available and where you might find some. I do recommend reading the accompanying notecard for a list of suitable locations). Up to four people can ride a car, with the owner using the UP ARROW key to start / keep the car in motion and DOWN ARROW to brake, while SHIFT-LEFT ARROW and SHIFT-RIGHT ARROW allow you to change the direction you’re facing on the car.

There are also various menu-accessible “customisation” options, which can be accessed when you’re not actually “riding” the car. These allow you to change the colour of various elements of the car, add / remove detailing, set the speed of motion, camera position, etc..

Traffic on the lines isn’t an issue – everything is phantom, although it is a little eerie having someone pass through you from behind or when coming in the other direction.

For those interested in exploring mainland regions, the car does offer a means of – dare I say it – providing a shared experience for up to four people, although the poor bugger actually “driving” the car is precluded from any conversation while the car is in motion, as they have to repeatedly tap the UP ARROW key to keep things moving. This can get tiresome, especially when lag is encountered. Making sure you flick the points as you approach them can also lead to some interesting diversions, however. Just mind the buffers; they most assuredly are not phantom.

On the fun scale, it has to be said the railcar does score – although the novelty factor may increase any initial score given. As a “Premium benefit”, however it is still pretty much sitting in the box with the rest of the offerings to date: something that is unlikely to impress many outside of those with an interest in exploring the Mainland rail networks. For the rest, and once the novelty has (possibly quickly) worn off, this is a gift liable to occupy inventory space more than it will be rezzed.

Last week Oz put out a call for help with testing the Mesh Parametric Deformer than Qarl Fizz has been developing, and which is now available in a Project Viewer (as well as some TPVs).

The response to that call has been somewhat slow, prompting Oz to pass a further comment on the JIRA related to the deformer (STORM-1716):

Perhaps this issue really isn’t all that important, or worth the trouble to integrate.

So far, only one designer has responded with one test garment.

Let me be clear – the lack of test material is a major blocker for testing, and therefore accepting, this proposed feature. If you want it, step up and do it soon.

The comment has been reported elsewhere (and remarked upon in the comments following my original piece on the call), and has caused some consternation.

However before people start taking Oz’s comment to heart as a sign that he or LL want to “kill” or “drop” the deformer, I spoke to Oz directly on the matter after reading the comment and he wryly admitted that it was intended as an attention-grabber and that, indeed, several more mesh designers have come forward indicating that they wish to engage in the testing as a result. When I asked him about the shock value of the comment, he replied, “Yeah, it was certainly intentional, and I would not have actually dropped it. But it is true that it would have taken far, far longer (months maybe).”

So does this mean we should ignore the underlying call for help?