The recent Marketplace issues are not precisely news any more. LL are working to resolve matters, but in the meantime are coming under increasing backlash from users as in response to the overall management of the situation, both in terms of the manner in which the company has handled open communications with merchants on the matter and in the way the Marketplace as a whole has been handled over the years – which frankly, has been far from stellar.

My thoughts on LL’s handling of communications on the core issues is a matter of record here. Others feel the same way, so much so that a vexed comment from Sera Lok on Twitter lead to a response from Rodvik:

On the one hand, the honesty in Rodvik’s response is to be applauded. Free from BS, it speaks to the heart of the matter in many respects. However, it has to be said that one apology via Twitter isn’t actually enough.

The problem here is that the current Marketplace issues are not a one-off situation; the fact is that the Marketplace as a whole has effectively lurched from controversy to controversy ever since XStreet, its progenitor (so to speak), was purchased by Linden Lab back in January 2009. Indeed, some of the problems being experienced today are as a result of issues relating to the re-coding / relaunch of XStreet as the SL Marketplace back in 2010, as LL themselves note in updates to their forum posts on problems.  As such, it has caused merchants and SL commentators to give voice to the widespread sense of frustration many feel towards LL and their management of updates and changes:

And herein lies the rub: one can well understand the managing, maintaining and updating a beast such as Second Life, which has had an organic growth over its 10-plus years of life,  to be nothing short of a major headache. It’s a difficult and complicated monster to control without sometimes breaking things; but the same cannot be said of SLM. This is a product that was originally purchased  as XStreet in a reasonably robust and working form, thus LL had no reason to rush through its redevelopment  and implementation  – yet that appears to have been precisely what happened in the drive to replace XStreet with SLM.

There can be no excuse here: the entire process appears to have been mishandled from start to finish, frequently with deadlines seeming to come ahead of consideration as to whether code was ready and often missing critical functions.  Even the recent roll-out of Direct Delivery trod this all-too-familiar route; while merchants openly pleaded with the Commerce Team not to roll out DD without ANS (Automated Notification of Sale) with some even posting precisely why ANS is vital to many merchants. Yet, when launched, DD brought with it the statement that ANS would be enabled in “next couple of weeks” (a time frame which itself, unsurprisingly, has slipped given the ongoing problems).

“Putting the Lab back into Linden Lab”

In a recent interview with Games Industry,  Rod Humble indicated that one of his goals from the start of his tenure as CEO was to “put the ‘lab’ back into Linden Lab”. Well, the mark of a good lab is its ability to rigorously apply robust and consistent processes and procedures to the work it carries out. At the moment, particularly with reference to the company’s management of the Marketplace, it would appear that much more needs to be done before the “Lab” is anywhere near being back in “Linden Lab”.

While it is very good to know the team is “crunching hard” to resolve issues, one very much hopes that the outcome will be more than a simple “fix it and move on”, leaving the door for the same mistakes to again be made in handling future Marketplace updates. Rather, one hopes that a long, objective look will be taken as to how things are being managed and the necessary checks and balances implemented to ensure that product roll-outs are no longer subject to the poor level of quality that  – as Tateru points out in her Tweet – users have been forced to expect and accept over the years.

I’ve received notecards relating to two events occurring this weekend I’ve been asked to pass on to readers.

The global sensation that is the 48 Hour Film Project comes to the virtual world of Second Life on with an exclusive in world screening of all entries from the 2012 Machinima 48 Hour Film Project, accompanied by film crew interviews and a presentation by Emmy nominated Film SFX supervisor Tony Dyson.

22 teams have entered the world-famous 48 Hour Film Project Machinima, where crews must create a movie within exactly 48 hours: write, shoot, edit and score it. With 3 required elements (prop, character and line of dialogue) and a randomly assigned genre, filmmakers must work fast to create high-speed cinematic history. In the Project 48 Machinima edition, films are created within games and online platforms.

The Linden Endowment for the Arts (LEA) is a resident-managed agency within the world of Second Life, tasked with nurturing and promoting the arts community within the virtual world. LEA’s new Media Arts Center specifically works with awareness, education and development of virtual world-generated video (machinima) and will be hosting this screening within its new LEA Theater, a high-tech facility designed for cutting-edge media events.

The winning film will represent the 48HFPmachinima at the Filmapalooza Filmfestival 2012, in Los Angeles, and take away a grande first prize of 3,000 Australian dollars. 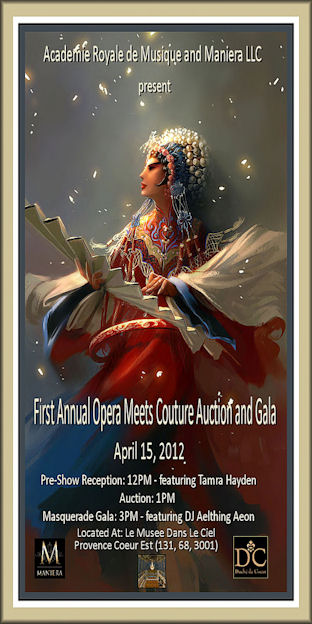 A selection of gowns from some of Second Life®‘s top designers will be sold with partial proceeds being donated to help support the Academie’s education and outreach efforts.

ARM’s director, Marquise Baharat Atlas, “Music education is of course at the forefront of our education agenda, and we offer a series of music education workshops and listening sessions. The Academie however continues to grow and expand beyond music into the performing arts enabling us to produce elaborate dance productions. We also offer immersive educational activities that allow guests to experience 18th century French customs and culture. All of our offerings are open to all”

Academie Royale de Musique supports and promotes superior music and theatre at the Duche de Coeur. The Academie’s mission primarily focuses on classical music however it showcases a variety of genre through several music appreciation and educational workshops and sessions.

The Academie also produces modern and liturgical dance as well as ballet and stage plays. We are proud of our partnerships with Unity Productions (liturgical and modern dance) and KG Shine Productions (theatrical plays). Together we bring spectacular performances throughout the year.

MANIERA MAGAZINE is one of Second Life®’s top fashion and lifestyle magazines with a distribution of over 30,000 in world. We were the first themed magazine in Second Life® and boast a staff of professionals in their field not only in Second Life® but in real life as well. We raise the bar of Second Life®’s magazine publishing industry by demanding excellence in our professional writing, expert photography and sleek design. Maniera Magazine is published in-world Monthly and also on the world-wide web via Issuu.