For RLV users wishing to try-out the new Viewer 3 UI, there is news: Marine Kelley already has a version of RLV out which incorporates the new UI and other bits.

The Viewer, built on the 3.2.2 (0) release of November 7th, includes the new UI presentation of buttons, notifications appearing up in the top right corner (see image), Destination Guide open by default, and so on.

Additionally, it retains the RLV menu option and  includes a couple of familiar sliders seen in other TPVs up in the Navigation Bar: the avatar offset and the Draw Distance (the latter of which I’ve always appreciated in those TPVs that have it in difference to a Quick Preferences button), as well as including the ABOUT LAND and SKY buttons.

Unlike the latest versions of the official Viewer, the mini-location bar is displayed in addition to the Navigation Bar  / Favourites Bar, rather than the option allowing you to toggle between the Navigation / Favourites and the Mini-location. Being the (0) release means the Viewer doesn’t have the new snapshot floater – but given the speed with which Marine got this version out, one supporting the floater may not be far behind!

Performance-wise, on my usual machine the Viewer is on a par with the latest 3.2.2 release, coming in with an average fps around 20-22. Some have reported teleport issues with 3.2, I’ve not encountered any myself – and certain none in this Viewer while hopping around the place.

There’s not a lot to review here that I’ve not covered elsewhere when it comes to the new UI (see the link at the top of this post). All I can say is, kudos to Marine on the speed of her response with the release, and if you are curious about the new UI and want to give it a go but don’t want to crack out of RLV – now you can! 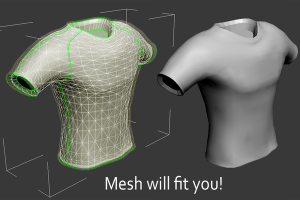 It’s taken a little while – understandably, as wheels have to be set properly in motion – but the parametric deformer project has its first official update today, in which Max Graf gives an overview of what is happening:

“Karl [Qarl Fizz, aka Qarl Linden as was] has begun working on the code and was contacted by LL in order to facilitate development of this feature. He will be working directly with LL from this point forward to supply them with code as the project moves forward, allowing them to check the feature with compatibility for the official LL releases as he progresses so that when it is done it can quickly and easily be included without weekes of additional testing. They contacted him directly to expedite the process and work together from the start of this, which means it will be working correctly and will make it a lot easier for TPVs and other grids to implement once it is done!

“This is great news and in addition to the comment Charlar made about further development with open source features is indicative of some serious new possibilities for development. Kudos to LL and Karl for being able to come to the table together for the good of the SL community. This is a best case scenario for this project, and indicates a strong willingness on LL’s part to adopt and implement this new feature that we have wanted since July.”

As Max says, this is a best case scenario for the project, and will do much to ensure the completed deformer can be smoothly integrated into the Snowstorm code. This is turn should make the code easily more adaptable by those TPV developers who maintain V3.x-based Viewers, although older V1.x Viewer developers may still have a little work on their hands. Once again this is a win-win-win scenario for all: Second Life, Linden Lab and OpenSim (which faces similar issues when it comes to mesh clothing).

Estimates put the work of code development at around four weeks or so; given that LL are now going to help ensure the code can be integrated into the Viewer code more readily, the development cycle may well stretch a little – but the end result will be more than worth it.

It’s great to see the Lab respond so positively and openly with a user-based project in this way, and again demonstrates that the Lab is willing to engage and work cooperatively with the community as a whole.

It’ll be interesting to see whether this project yet proves to be a new building block in the way the Viewer is developed and enhanced in the future.

They shall grow not old, as we that are left grow old;
Age shall not weary them, nor the years condemn.
At the going down of the sun and in the morning
We will remember them.

They mingle not with laughing comrades again;
They sit no more at familiar tables of home;
They have no lot in our labour of the day-time;
They sleep beyond England’s foam.