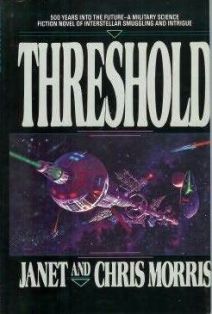 Test pilot Joe South and his experimental test spacecraft are catapulted 500 years into the future from the 25th century, arriving in the vicinity of the space station Threshold. Aboard the station, he discovers Earth is now a preserve with restricted access for the human wealthy only.

For the station’s chief, Mickey Croft, the anachronistic South is the last thing he needs to have added to his plate. The station is playing host to a conference of dignitaries discussing the rights of alien races and bioengineered species that have been created as indentured servants, and a ship load of Muslims have arrived from distant Medina, determined to reach Earth on their pilgrimage to Mecca.

However, whether he likes it or not, Croft’s lot is about to get a lot more complicated, thanks in part to a pair of  – literally – star-crossed lovers and the additional arrival at Threshold of a scavenger ship that brings with it an alien artefact of unknown purpose and power.

Note: this session is subject to confirmation – check directly with Library staff.

The Kingdom of Galaway has a law – The Test of Kings –  that every heir to the throne must work a year and a day as a commoner in order to prove they are worthy of being ruler. Not a great law when you are as lazy and indulgent as Prince Larry.

He find that on his day, he must become servant to a former slave, Brishee, as she is conscripted to find the lost artefact, The Shield of Many Uses. However, the evil Percy has other ideas. Via murder and conspiracy, he intends to usurp the throne of King Willy.

Will Larry survive in his role as servant to Brishee? Will she succeed in her quest – and Larry, by extension, succeed in The Test of Kings, or will he be the first to fail, and Percy thus succeed?

The King, meanwhile, has problems of his own: why does Cruith the Crone keep stealing his chickens? Why is she always the first in line to bend his ear on Beggar’s Day?

A special for Star Wars month as the Seanchai cinema space plays host to videos from the galaxy far, far away.