In May 2018, Linden lab via their design team of Sansar Studios launched a collaboration with Roddenberry Entertainment, run by Eugene “Rod” Roddenberry Jr, the son of Star Trek creator Gene Roddenberry. It saw the opening of a new experience, The Bridge of the USS Enterprise (read here for more) and came with a promise of “more to come”, probably around the time of the Star Trek Las Vegas 2018 convention (Auguest 1st through 5th, 2018). Well, in keeping with that promise, on Wednesday, August 1st, Linden Lab and Roddenberry Entertainment unveiled the next step in their Sansar collaboration.

The Roddenberry Nexus is billed as “the final frontier of fan engagement. Experience the legacy of Roddenberry in a whole new way – never-before-seen props, costumes, and so much more.” And it is a beautiful build; albeit one perhaps a little light (for the time being) on the kind of detail Trek fans like myself might like to see. 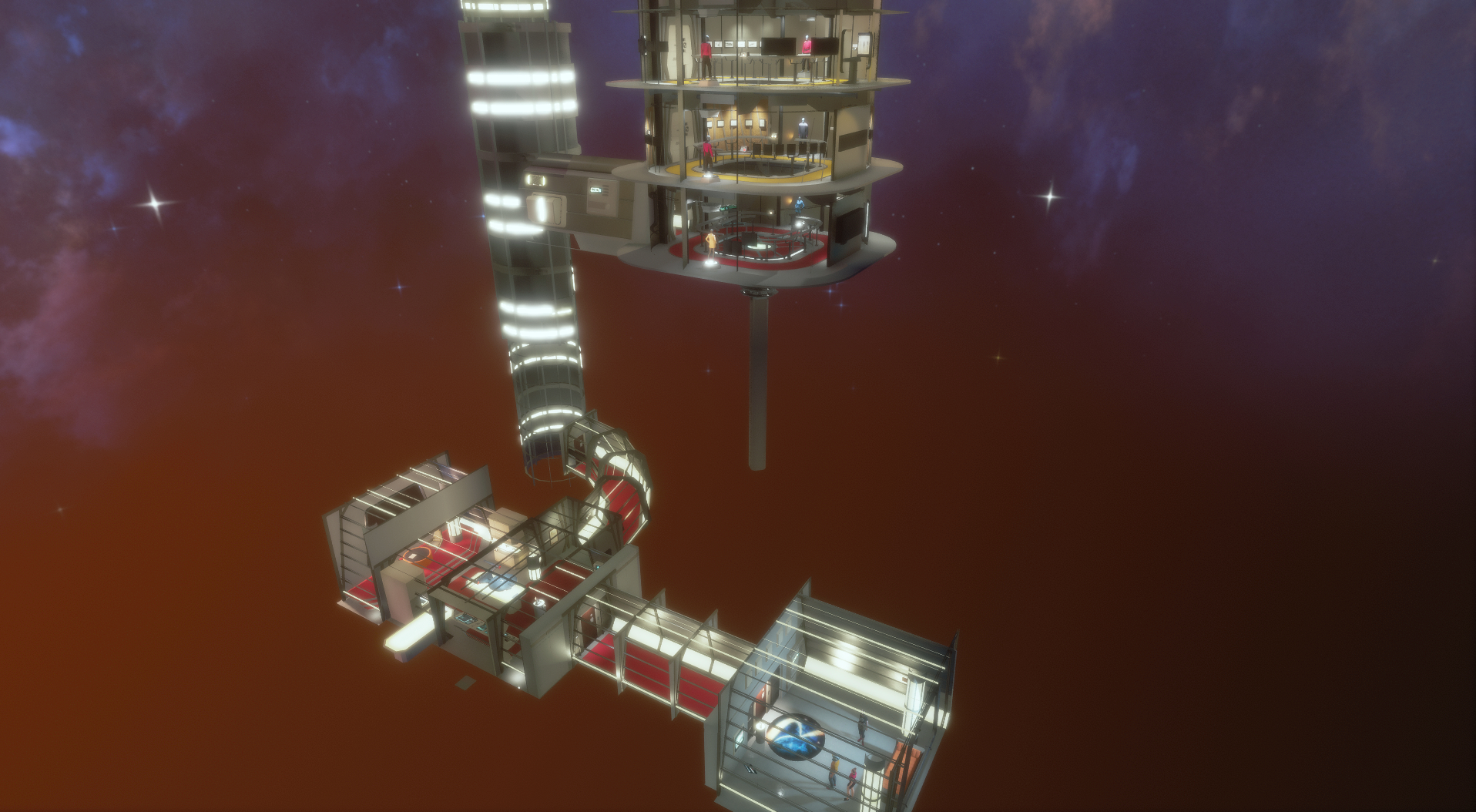 Sansar: Roddenberry Nexus: The experience is fairly complex, starting at the spawn point, bottom right, proceeding through the lower exhibition space, thence via corridor to a teleporting “turbo elevator” to the upper three galleries, which are linked by a central lift platform

The spawn point for the experience is very mindful of the cabin designs seen in 1979’s Star Trek: The Motion Picture (ST:TMP), complete with corner lighting column. Here one can listen to an introduction to the Nexus from Rod Roddenberry before passing through the waiting door into a ship’s corridor.

This leads to the first display room, which, other than the couch at the far end is a little suggestive of the engineering space found in the Enterprise-D of Next Generation fame. It i dominated by a model of the McQuarrie concept for a radically altered USS Enterprise design, which is seated on what could otherwise be taken to be representative of Geordi La Forge’s engineering table.

Sansar: Roddenberry Nexus: personal memorabilia from the lives of Gene and Majel Roddenberry, reproduced in Sansar

This was the design (seen at the top of this article) being considered for one of the potential returns of Star Trek following the 1969 cancellation of what was to become known as a The Original Series (TOS). This design is perhaps most readily associated with the unproduced TV series, Star Trek: Phase II, however, as the text accompanying the model notes, originally, the design was put forward for a Star Trek film, Planet of the Titans, which was pushed to one side in 1977 in favour of the new TV series concept. While both film and series were ultimately never made, as every Trek fan will know, and as the text again confirms, the design did make two on-screen appearances in Star Trek; The Next Generation, and formed the inspiration for the Crossfield class of vessel seen in the latest incarnation of TV-based Trek, Star Trek Discovery.

Also to be found on this level are some wonderful miniatures representing props from the original series and Trek’s first big screen outing. There are also models more personal to the life of the Roddenberrys: a reproduction of the Kaypro wordprocessor model used by Gene Roddenberry after he gave up on the typewriter (a computer perhaps made most famous by science fiction author Sir Arthur C. Clarke), a copy of Majel Barrett-Roddenberry’s personalised car license plate, and a model of the infamous IDIC Medallion.

Beyond this, on the additional levels, reached by teleport and a working elevator, can be found more in the way of reproductions of various Trek uniforms, together with artwork from (again) ST:TMP in the form of storyboard sequences, and also from one of the more overlooked aspects of the franchise – the 1973 animated series. Additional displays along the corridors complete the initial content, while communications panels spaced throughout the experience provide audio information from a range of hosts, all of whom have ties to, or worked on, the various Trek incarnations.

In terms of the individual series and films, the Nexus is perhaps a little light: The Motion Picture gets fair coverage, but the other films – outside of things like uniforms and insignia – are almost entirely absent. However, Trek is a big subject, and much of the latter history is more than likely fairly familiar to most Trek fans, so this can perhaps be forgiven, particularly as the Nexus will be expanded over time. The infamous Kelvin Universe and Star Trek Discovery are present, albeit in a most subtle manner (check the insignia display along one corridor). It’s also probably not unfair to say that trying to cover everything  – even leaving aside 52 years of history being voluminous – is likely made more difficult by the complex web of rights involved in Trek (CBS holding the television rights, Paramount retaining the big screen rights and so on).

Those attending  STLV 2018  have the opportunity to visit the Nexus in VR – and possibly wind an Oculus headset and “Roddenberry Goodies” in a raffle. There weren’t too many people availing themselves of the experience during my three visits – but then, I’m across the Atlantic and half a continent away from Las Vegas, so it’s unlikely my visits coincided with times when I was in the experience (05:00 and 07:00 Las Vegas time on my 2nd and 3rd visits).

As a means to attract an audience, approaches like this – offering something unusual and with a guaranteed niche audience – is a subtle way of increasing people’s awareness of Sansar, if not a guarantee of obtaining extended growth in terms of active engagement. Certainly, if it is emphasised the Nexus and The Bridge of the USS Enterprise can both be accessed from PC systems without the need for VR and the Nexus is to be grown in scope, it might encourage some of those visiting by way of STLV to keep an eye on Sansar for the future. That said, I am a little surprised that while the spawn point offers a teleport to the Hollywood Art Museum, there doesn’t appear to be an opportunity for people to hop over to The Bridge of the USS Enterprise.

Given the niche nature of Trek fandom in the global scheme of things, the fact that Linden Lab have struck up a working relationship with Roddenberry Entertainment led me to wonder how many Trek fans might be at the Lab. It was a question, alongside one concerning future plans for the Nexus, that I was able to put to Jason Gholston, who heads-up the Lab’s Sansar Studios.

Yes… Many Trek fans at Linden. Sansar Studios’ Torley loves Star Trek! This is just the beginning. We should see the Roddenberry Nexus expand in time! So many fantastic stories to tell and artefacts to share.

– Jason Gholston, head of Sansar Studios, on support at the Lab for Star Trek and future Nexus plans

So why not pull out your communicators / tap your combadges and beam over to the Nexus!

The G.B.T.H. (Grab By The Horns) Project, curated by Megan Prumier and Marina Münter, and described as being “focused on the extension of creative processes, 3D environments and art related subjects”, opened its August 2018 exhibition at the start of the month.

Concrete Diorama features the work of sculptor Mistero Hifeng, presented in a strange, semi-dark environment where the contrasts of dark  – black and grey – spaces with the bursts of brilliant white within some chambers is as much a part of the exhibition as Mistero’s pieces.

From the landing point, visitors travel along a semi-dark hallway, lined by port holes lit by spotlights. Each portal looks out over individual scenes of couples caught in acts of tenderness, suggesting a theme of love (and perhaps loss or regret). A second darkened hallway follows, windows on either side looking out onto scenes of figures floating in bubbles. Further along, two large proportioned figures stand beside cracked models of the moon, ramps to either side of them leading up to the first of the white chambers. Here, figures lie in a circle, prostrated under fine mess nettings, all facing a central lone tree.

In further chambers dancers perform ballet as couples lie in shallow troughs in the floor, whilst a grand diorama focused on a piece called Bruciando Ricordi (Burning Memories) awaits in the uppermost chamber of the exhibition space.

It’s a haunting, evocative setting, rich in mood and emotion. The expressions of love and loss, coupled with pleading, desire, and regret are all present throughout – most clearly through the crowning piece that features Bruciando Ricordi, which joined by the likes of La Magia di Quell’incanto (The Magic of That Enchantment) and Su Questo Silenzio…Balla (On This Silence … Dance). But the nuances and measure are broader than may first appear.

The couples in their troughs beneath a transparent floor, for example, perhaps carry with them the idea of loss through death, and a desire never to be parted. Meanwhile, the figures prostrated around the tree under their fine netting, appear to be in a different kind of mourning. Are they perhaps a reference to the way we humans can be indifferent to the plight of nature at our hands – at least until it is too late, as signified by the denuded and barren tree sitting at the centre of their circle and the apparent focus of their grief? And what of the large women beside their broken moons? Are they attempting to hide their heads in shame, the result of seeing the slender figures before them, and the  knowledge that society encourages us to embrace the slim as figures of beauty and reject the over-sized?

I’ve long appreciated and enjoyed Mistero’s sculptures, but this is perhaps the first time I’ve seen them brought together in a way that suggests a layered, nuanced narrative; one that resides not only in the individual pieces or in the way some have been brought together to form a diorama, but also right throughout the different levels and chambers within the installation as a whole. It’s an approach that, despite some of the darker tones (literal and metaphorical) apparent in the exhibit, is both effective and captivating.