Throughout human history – and outside of flights of fancy – the Moon has always been thought of as an airless ball of rock, tidally locked to Earth so that it shows the same, almost never-changing face to us in the night sky. But it may not always have been so.

In recent years, our perceptions of the Moon have been changing as a result of a number of studies and missions. In 2009, for example, India’s first lunar mission, Chandrayaan I, produced a detailed chemical and mineralogical map of the lunar surface, revealing the presence of water molecules in the lunar “soil”. In that same year, NASA launched a pair of missions to the Moon, the Lunar Reconnaissance Orbiter (LRO) mission and the Lunar Crater Observation and Sensing Satellite (LCROSS).

LCROSS was a small satellite designed to follow the upper stage of the rocket used to launch it and LRO to the Moon and analyse the plume of debris created by the impact of the upper stage with Cabeus crater in the Moon’s south polar region. The impact came with a kinetic energy equivalent of an explosion created using 2 tons of TNT, and LCROSS recorded strong evidence of water within the resultant impact plume.

For its part, LRO entered lunar orbit to commence a comprehensive campaign of mapping, imaging and probing the Moon’s surface and environment. In doing so, it further confirmed the presence of abundant concentrations of water in the lunar south polar regions. At the same time and LRO has been studying the Moon, an ongoing analysis of the rock samples brought back by the Apollo astronauts has revealed strong evidence for a large amount of water being present in the lunar mantle – possibly as much as is present in Earth’s upper mantle.

These results and findings have given rise to the idea that very early on in the Moon’s history conditions could have been very different to how it is now. In the immediate period following the Moon’s creation (roughly four billion years ago), there are a period when it was very volcanically active (about 3.8-3.5 billion years ago), releasing considerable amounts of superheated volatile gasses, including water vapour, from its interior. This outgassing could have given rise to an atmosphere around the Moon dense enough to support that water vapour condensing out into liquid on the surface which could have conceivably lasted for several million years whilst the atmosphere remained dense enough to support it, before it either (largely) evaporated or retreated underground to eventually freeze.

In their new study, published in July 2018, Dirk Schulze-Makuch, a professor of astrophysics at Washington State University, USA, and Ian A. Crawford, a professor of planetary science and astrobiology at Birkbeck College, University of London, UK, review the evidence for liquid water to have been present on the Moon and examine the potential for it to have been life-bearing. In particular, they note that when all is said and done, if the early conditions on the Moon did give rise to a dense atmosphere and a water-bearing surface, then the conditions there wouldn’t have been that different to those being experienced on Earth when life here was starting up, and would have occurred in the same time frame.

It looks very much like the Moon was habitable at this time. There could have actually been microbes thriving in water pools on the Moon until the surface became dry and dead.

Dirk Schulze-Makuch, co-author of Was There an Early Habitability Window for Earth’s Moon?,
quoted in Astrobiology Magazine

So does that mean life, however transient, got a start on the Moon? Possibly; however, some have suggested rather than giving rise to life directly, the conditions on that early Moon might have been ideal for life from Earth to gain a toe-hold.

As noted, the period when the Moon may have had its dense atmosphere coincided with life starting on Earth in a period referred to as the Late Heavy Bombardment, (4.1 and 3.8 to 3.5 billion years ago). During that time, bacteria such as cyanobacteria were believed to be already present on Earth, even as it was being bombarded by frequent giant meteorite impacts (hence the period’s name). So the suggestion is that this bombardment could have thrown chunks of bacteria-laden rock into space, where they were “swept up” by the Moon, transferring the bacteria to its surface, where it might have taken hold.

It’s unlikely that if it go started, life on the Moon got very far; within a few million years after the end of the Moon’s volcanic period the atmosphere would have been lost, and conditions would have become far too harsh for life to endure. However, in noting this, Crawford and Schulze-Makuch use their study as a call for a more robust study on the potential ancient habitability of the Moon, including a hunt for possible biomarkers.

Such an endeavour would likely be focused on the lunar south polar regions, simply because of the potential abundance of subsurface frozen water there. And as it is, NASA, India and China are already committed to studying the region in great detail. NASA will initially do so from orbit, while the Indian Chandrayaan-2 mission will attempt to place a lander and rover close to the Moon’s south pole in 2019. Also in 2019, China will send its  Chang’e 5 mission to the Moon’s north polar regions to gather and return around 2 kg of rock samples for detailed analysis on Earth.

END_OF_DOCUMENT_TOKEN_TO_BE_REPLACED

Join Seanchai Library and friends aboard one of the most luxurious means of rail travel, the Orient Express, as they continue their investigations into the most disagreeable events that have occurred en route to Paris.

Having been required to return to London from Istanbul post-haste, Hercule Poirot sought passage aboard the most famous train, gaining seat initially in second class, only to be “upgraded” to first class by his friend – and member of the board of directors for Compagnie Internationale des Wagons-Lits, the operators of the service – M Bouc. Prior to his “upgrade”, Poirot is accosted by one Samuel Ratchett, an American also travelling on the train, who demands the detective’s aide as he believes his life is in danger. However, Poirot refuses, on account of finding the American a distasteful individual.

Then, on the night after his upgrade to the sleeping berth next to Ratchett’s, he is woken by two events: the first is that the train has become stranded in snow not far from the city of Vinkovci in Yugoslavia. The second is the discovery that Ratchett’s fears about his safety were correct: his has been murdered in his cabin. But who is responsible?

With nowhere to go until assistance for the stricken locomotive arrives, Poirot sets out to discover – did someone board the train in secret to put an end to Ratchett, or was one of his fellow passengers in fact the murderer? And what of Ratchett himself? Was he really all he seemed?

Offered in a special setting, Murder on the Orient Express, one of Agatha Christie’s most popular stories, continues into its second weekend reading! 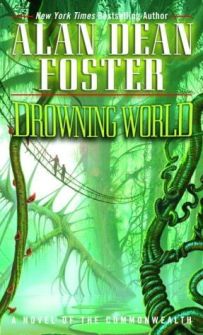 They call it the Drowning World; Fluva, a planet on the fringes of the Commonwealth where the rain is – but for one month in the year – maddeningly torrential. For Chief Administrator Lauren Matthias, it is a new posting; one which comes with a major requirement: keeping the indigenous and warlike Sakuntala and immigrant and hard-working Deyzara, from annihilating one another.

But when the vessel used by bio-prospector Shadrach Hasselemoga crashes in Viisiiviisii, an immense, mostly unexplored jungle, and the wettest place on the planet, Matthias must dispatch a team made up of one Sakuntala and one Deyzara on a rescue mission. Can the two form an alliance long enough to both rescue Hasselemoga and survive the deadly jungle?

But as the mission unfolds, Matthias realises something much bigger and darker is occurring on Fluva. A mysterious presence is at work, manipulating events, one which not only puts the lives of the rescue mission at risk, but also her own – and which could ultimately threaten the Commonwealth itself!

Corwyn Allen dives into Jim Butcher’s 2018 collection of several of his excellent short stories and novellas from the universe of Harry Dresden.

The tales presented here not only offer excellent short narratives that dabble between the scenes of the other novels in the Dresden Universe series, they even encompass what might be Dresden’s greatest challenge…

The Greek myths are the greatest stories ever told, passed down through millennia and inspiring writers and artists as varied as Shakespeare, Michelangelo, James Joyce and Walt Disney.

They are embedded deeply in the traditions, tales and cultural DNA of the West. In Stephen Fry’s hands the stories of the titans and gods become a brilliantly entertaining account of ribaldry and revelry, warfare and worship, debauchery, love affairs and life lessons, slayings and suicides, triumphs and tragedies.

Through them, you’ll once again fall in love with Zeus, marvel at the birth of Athena, wince at Cronus and Gaia’s revenge on Ouranos, weep with King Midas and hunt with the beautiful and ferocious Artemis.

14:00: Fireside Tales: The Following Shoes are a Gift from the Pope

Caledonia shares a draft of her latest short story, inspired by Pfaffenthal 1867 in SL, and a legendary ghost from Luxembourg.