The 2017 Team Diabetes of Second Life Winter Art and Showcase event opens on December 1st, 2017 and run through until December 10th, inclusive. As with previous years, the event will include ten days of live performers, DJs, concerts, tribute acts, hunts, ice skating, ice fishing and, of course the Winter Showcase and the Kultivate Winter Art show. All to raise money for the American Diabetes Association (ADA), through Team Diabetes of Second Life, ADA’s official and authorised in-world fund-raising team. 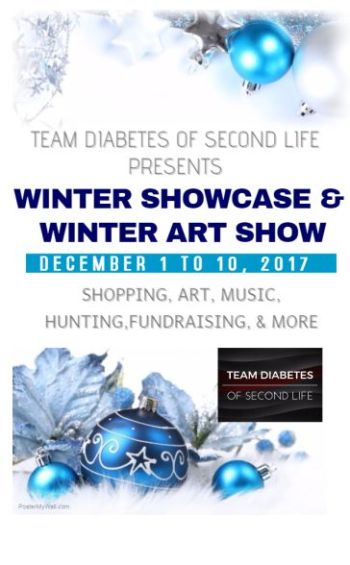 Merchants are each offering at least one item among their displays with 100% of proceeds from sales going directly to Team Diabetes of Second Life. The Showcase once again occupies half of Kultivate Magazine’s home region, a short walk from the brand’s art gallery spaces, and faces the Winter Art Show.

In addition to the shopping and art, the event features two hunts with prizes to be claimed:

About the American Diabetes Association

Established in 1940, the American Diabetes Association is working to both prevent and cure diabetes in all it forms, and to help improve the lives of all those affected by diabetes. It does this by providing objective and credible information and resources about diabetes to communities, and funding research into ways and means of both managing and curing the illness. In addition, the Association gives voice to those denied their rights as a consequence of being affected by diabetes.

About Team Diabetes of Second life

Team Diabetes of Second Life is an official and authorised fund-raiser for the American Diabetes Association in Second Life. Established with the aim of raising funds in support of diabetes treatment and to raise awareness of the disease in SL, Team Diabetes of Second Life was founded by Jessi2009 Warrhol and John Brianna (Johannes1977 Resident), and is served by an advisory board comprising Eleseren Brianna, Veruca Tammas, Sandie Loxingly, Rob Fenwitch, Earth Nirvana and Dawnbeam Dreamscape, with Saiyge Lotus serving as a special advisor.