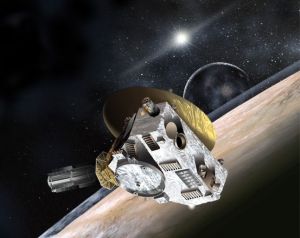 It’s been a little quiet on the new images front where the New Horizons mission is concerned. The spacecraft, which performed the first ever flyby of Pluto and Charon in July, gathered a wealth of data, around 95% of which has remained aboard the spacecraft awaiting transmission back to Earth.

There have been a number of reasons this has been the case. First off, for the period following the close encounter, New Horizons continued to gather data and images of the Pluto-Charon system. Such is the design of the vehicle that while doing this, it couldn’t actually transmit information back to Earth. Also, once the data had been gathered it required sorting and prioritising ready for transmission back to Earth, and this again took time to do.

However, on Saturday, September 5th, New Horizons oriented itself to make contact with the Deep Space Network (DSN) operated by NASA for what was the start of a year-long “intensive” download of the 10 gigabits of data gathered by the craft, starting with information the science team regard as the highest priority data sets.

The reason the transfer will take so long is not only because the enormous distance between New Horizons and Earth, which takes radio signals moving at the speed of light over 4.5 hours to cross (a time which is slowly increasing), but also because the rate at which the data can be transmitted is limited.

Currently, the nuclear “battery” powering New Horizons can only produce around 2-10 watts of electrical power, which has to keep all of the various electrical systems warm and running. So to conserve power, the vehicle only transmits data at between 2-4 kbps. To put that in perspective, it would take you about 2 hours to download a single photo from your cellphone to your computer at those speeds.

Discussing the start of the extended data download from New Horizons, Alan Stern, the mission’s Principal Investigator, said, “this is what we came for – these images, spectra and other data types that are going to help us understand the origin and the evolution of the Pluto system for the first time.”

He continued, “and what’s coming is not just the remaining 95 percent of the data that’s still aboard the spacecraft – it’s the best datasets, the highest-resolution images and spectra, the most important atmospheric datasets, and more. It’s a treasure trove.”

To mark the receipt of data and images, NASA / JPL and John Hopkins’ APL have designated Friday as Pluto Friday, when they’ll be publishing that latest images, unprocessed, received from the spacecraft the previous week. The images will be available on the LORRI image catalogue, operated by JHU / APL, starting on Friday, September 11th, 2015.

In the meantime, here’s an animated video from NASA, showing the Pluto flyby, just to whet appetites.

Mars’ Atmosphere: Where did It Go?

One of the many mysteries of Mars is what happened to its atmosphere. All of the evidence gathered over the years about the Red Planet is that it once had an atmosphere dense enough to support free-flowing liquid water, and that potentially as much of 20% of the planet’s surface may have been submerged.

So what happened? There are a number of theories. One of these is that over time, the action of the solar wind, combined with Mars’ relatively weak gravity, effectively “scooped” much of the atmosphere away into space.   Measurements of heavy and light carbon ratios in the present day atmosphere lend considerable weight to this theory.

Another idea is that carbon dioxide, the major constituent of Mars’ atmosphere may have been “sequestered” – that is, “pulled” out of the atmosphere to be stored in rocks and subsurface deposits by various chemical reactions, forming carbonate minerals in the process.

This theory was given its own boost when a region of Mars called Nili Fossae, approximately as big as the US state of Arizona, was found to have huge deposits of carbonates (more recently this region has been of interest to scientists due to the discovery of impact glass, helping to mark the region as a candidate target for the Mars 2020 rover mission).