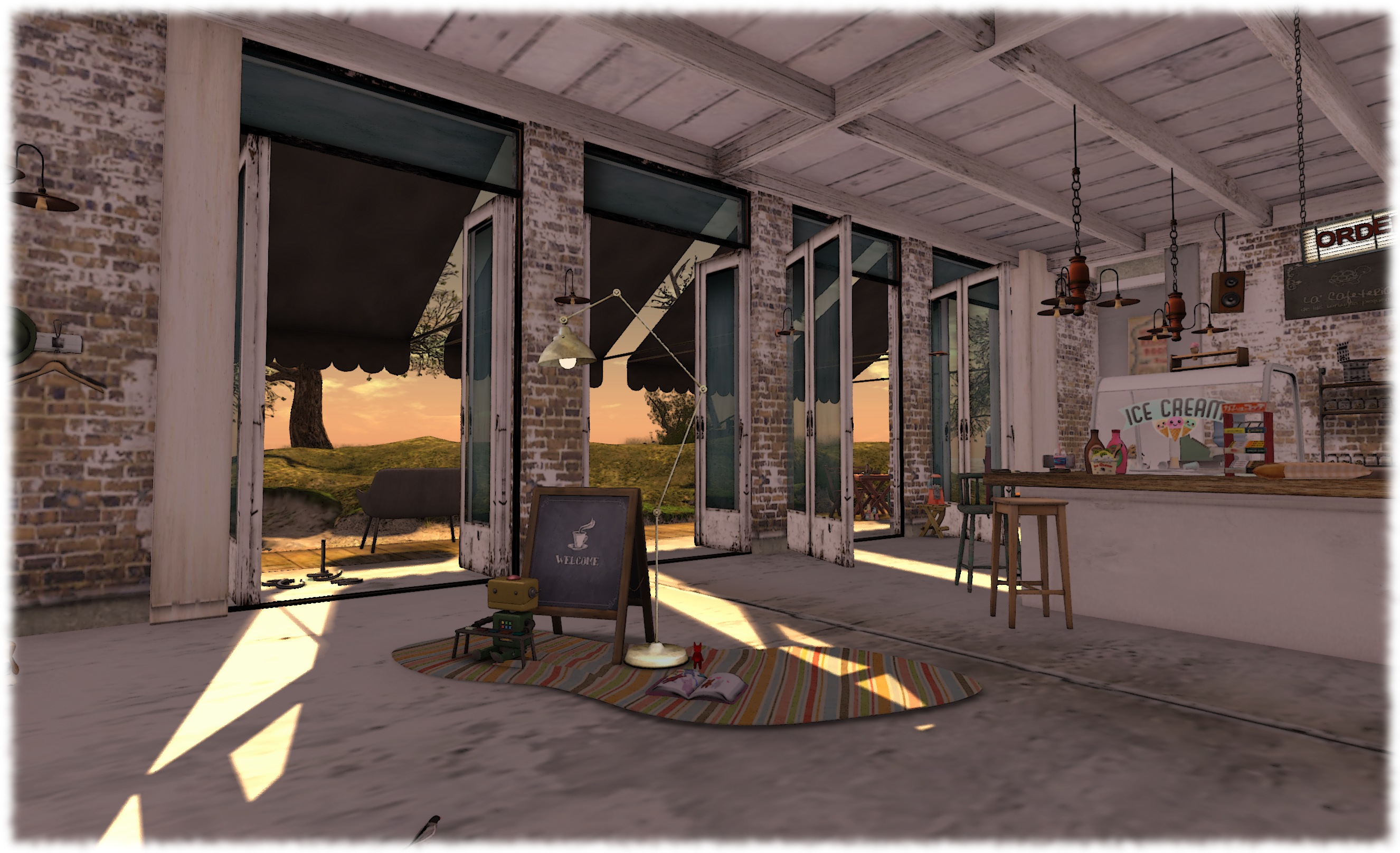 I was delighted to learn from Ziki that Scribbled Hearts has made a return to Second Life. Formerly on the region of Water Reserve, Scribbled Hearts is back on another Homestead, this one bearing its own name.

It’s fair to say I fell in love with the original when I visited it in October 2012, and I was disappointed to learn it was going away at the end of that year. So on reading that is it now back with us, I had to hurry over and explore.

The new region has much in keeping with the old. It is a quiet rural / coastal setting where water plays a key part, styled by Randi Lenroy. It is the home of *. emm [shop],  which was present in the original, owned by Snowy Melody-Deluxe, and which is this time joined by Little Closet, operated by Noel Ryhann Kennedy-Deluxe. Finally, as also was the case with the original, neither store overwhelms the region, but fit their surroundings perfectly. 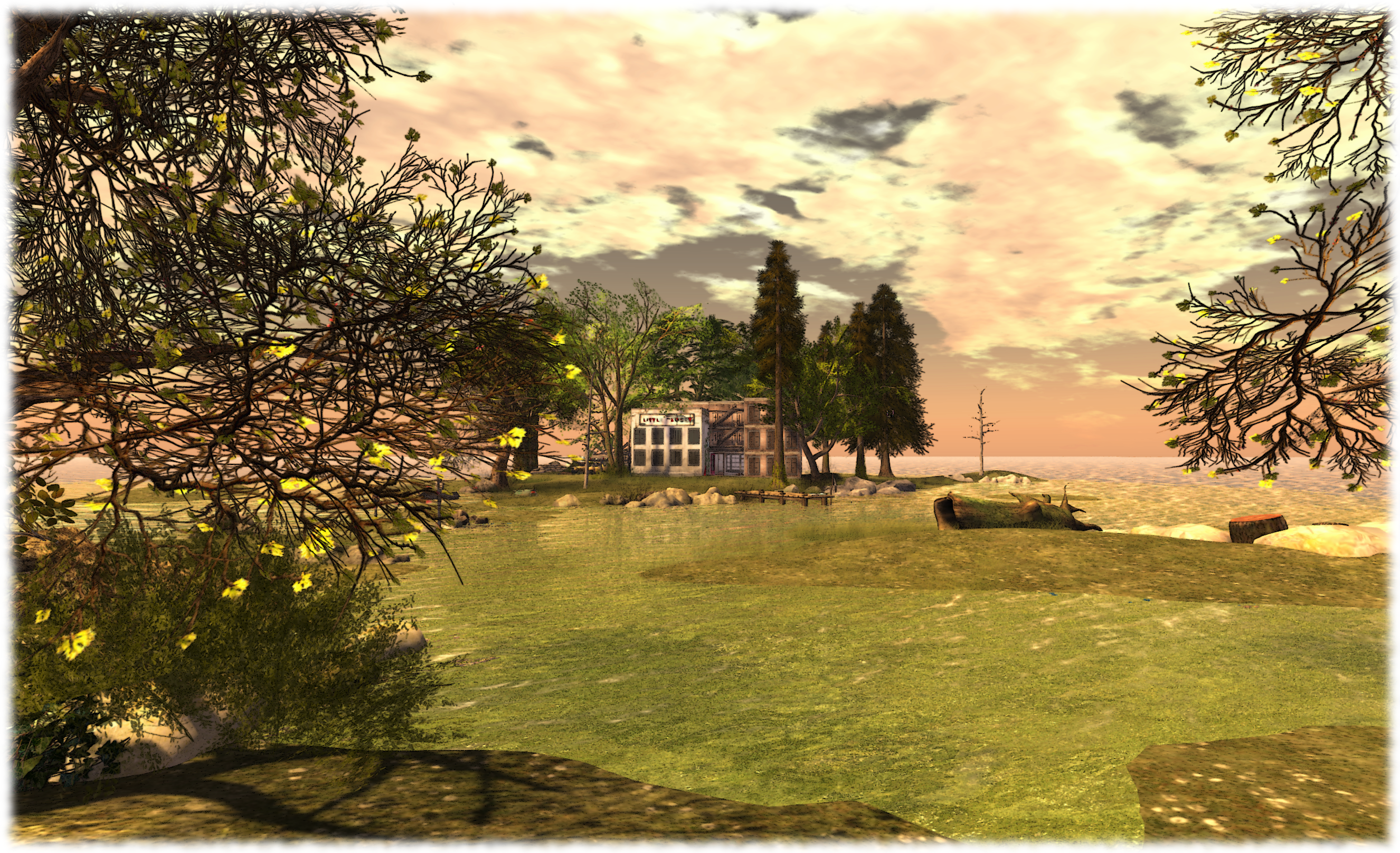 Little Closet occupies a small island in the south-east corner of the region, which is linked to the rest of the land by a partially flooded grass causeway which in turn forms the main teleport point.  *. emm [shop] is across the region, towards the north-west corner, sitting in open grassland.  There is also a cafe on the west side of the main island, surrounded on three sides by water. The rest of the region is a mixture of woodland, water and a small, intimate beach,  all beautifully and naturally presented.

Winding across the main island are a couple of trails, one of which runs from the cafe the other from * emm [shop] before they both meet under the shade of the trees and point the way towards Little Closet. “Trails” is actually probably too strong a term. Looking at the way they wind across the land and under the trees, and considering their raised, cut sides, they look just like dried-up stream beds rather than paths. If that was the intention is laying them, then it’s another clever nod towards Scribbled Hearts’ water-related nature. 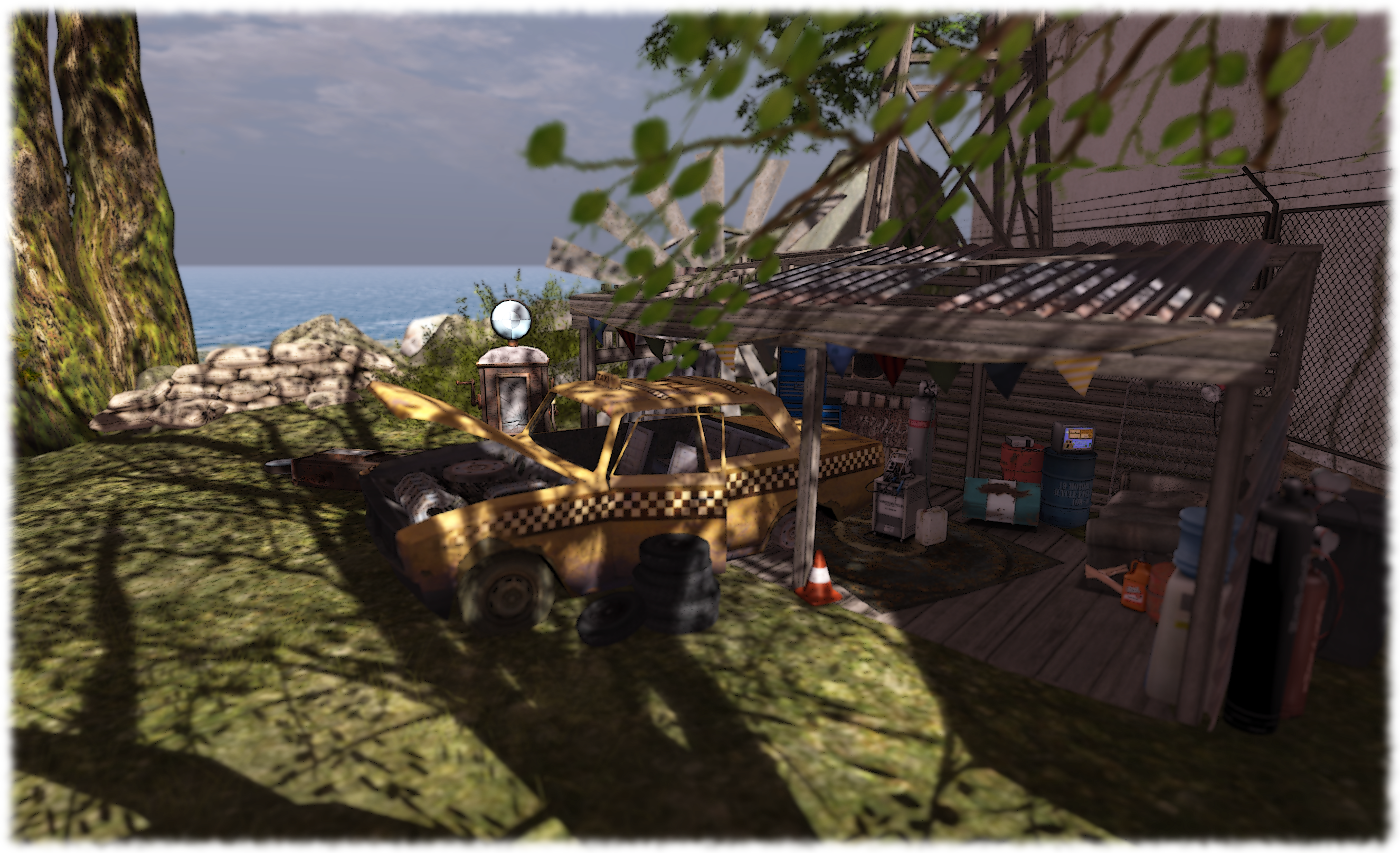 The region  has a custom windlight setting which is absolutely perfect for the landscape, presenting you with a late afternoon, the sun partially hidden by clouds, a slight haze evident through the trees. If you have Firestorm or have installed Vincent Nacon’s clouds, the windlight works really well with the altocumulus clouds. Not that you need be limited to using it; as with the previous designs, this is a place which lends itself to a whole range of lighting options and opportunities, allowing the SL photographer to play to their heart’s content.

There’s a lot worth snapping as well; not only is the landscaping superb, there a lots of lovely touches to be found throughout the region and around the buildings themselves. The cafe is practically a work of art of itself with all the detail put into it, and very photogenic as a result, while Little Closet has a number of nice touches around it, some of which form little vignettes of their own, such as the scene with the taxi and shed.  * emm [shop] offers itself as a part of the rural setting, its barn-like appearance blending will with the open meadow and surrounding trees. And it doesn’t end there – wander around and you’ll come across opportunities to capture a lot of pictures and scenes. 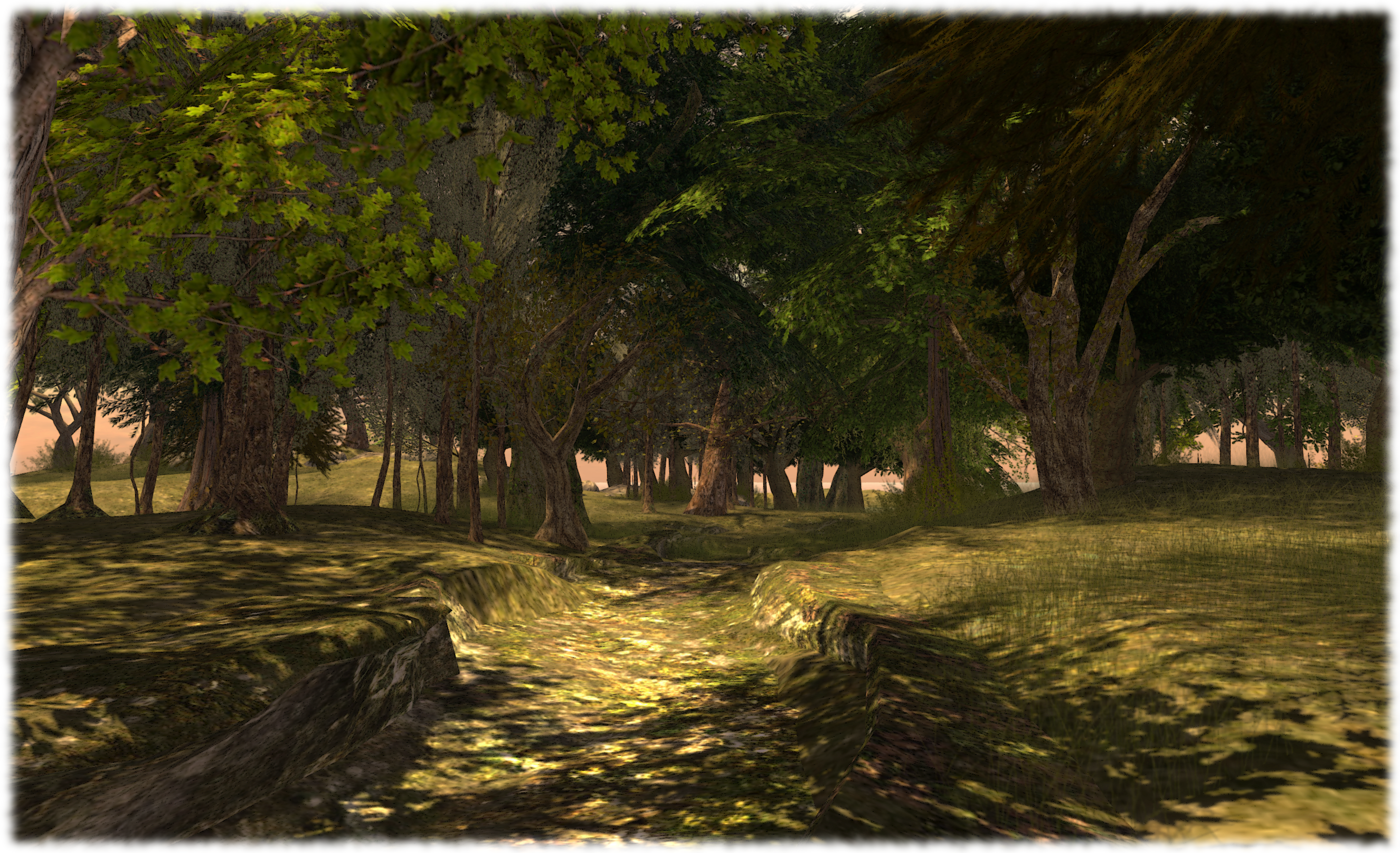 If walking isn’t particularly your thing, you can pick-up a bicycle from the cafe and use it to get around the islands, although I confess I found the bike a little hard to steer (hardly surprising giving there are no paved surfaces :)).

There is a 3-minute auto return time on the region, so if you are in need of a prop or two for a particular photo, you have a few minutes in which to make use of it.

It is wonderful to see Scribbled Hearts make a return to Second Life, more so given the strong sense of continuity between “new” and “old” for those of us fortunate enough to remember how it looked when hosted on Water Reserve. 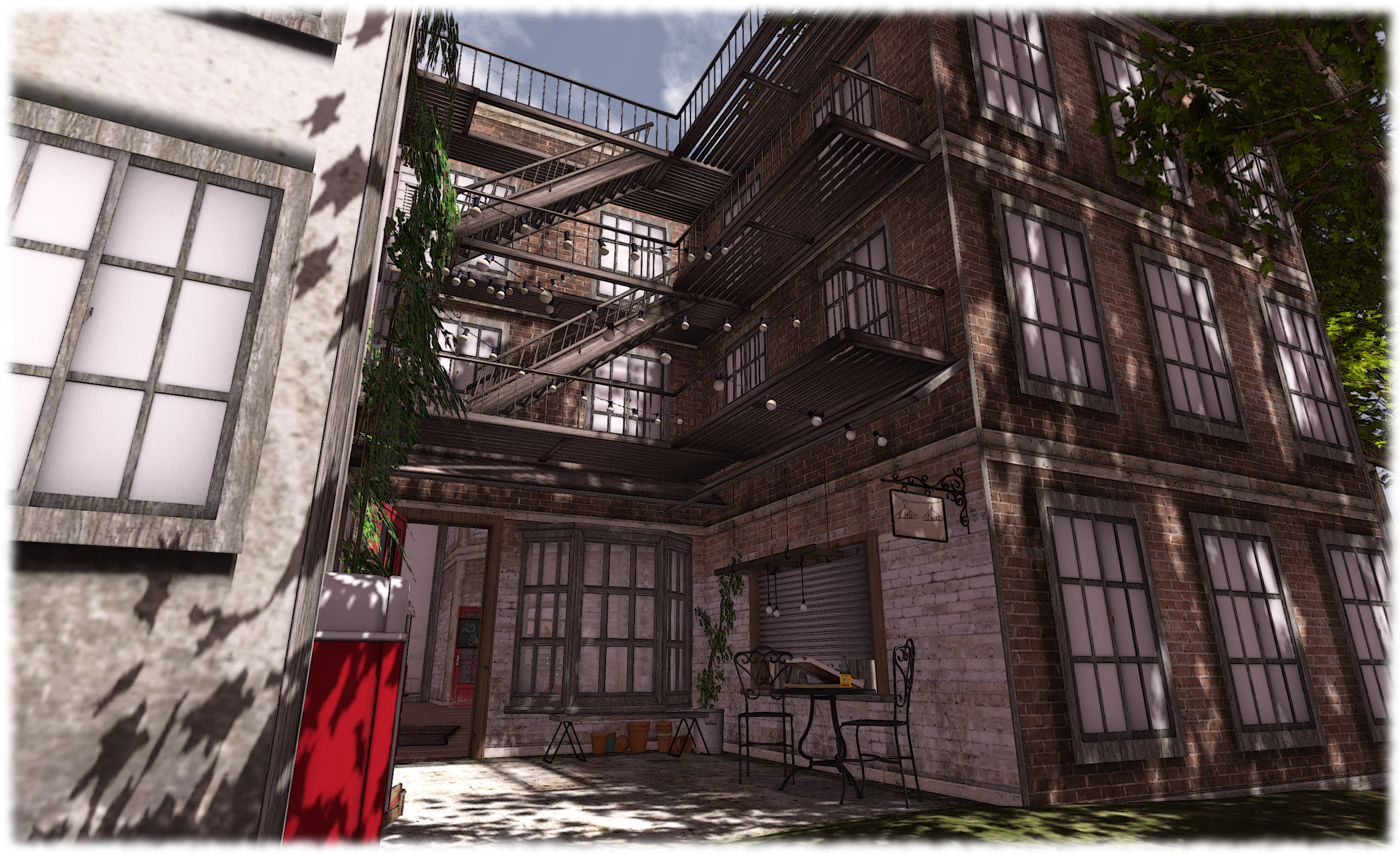 If you’ve never paid a visit to Scribbled Hearts old or new, I cannot recommended it highly enough, whether you’re seeking a new place in which to relax or to explore, or whether you have an itchy camera shutter finger.

For me, the return of Scribbled Hearts came at just the right time. It’s the latter end of the school holidays here, and as per a usual routine, I have a my God-daughter (one of three) for the week. She’s an energetic almost-eight, and it may well be only Monday, but I’m already worn out, so it’s a welcome piece (peace?) of sanity in my world right now :).

One thought on “Once more a Scribbled Heart”