I’ve been keeping an eye on Desura for a while, mainly to see if any rebranding commences. In doing so, I came across the fact that Patterns is now available on the Lab’s latest acquisition.

Whether the Lab heard my speculation on the subject of Patterns and Desura or not I’ve no idea* , but Patterns appeared on Desura  at the start of August, just after I last poked at the digital distribution service. It arrived with a “special offer” of an additional 25% off the purchase price (so 75% off rather than the “usual” 50% for the Genesis version). This offer ended on Monday 5th August, and the price is now back to the 50% off the “Alpha” price.

Response from the Desura community has so far been small but positive, with most ratings sitting at 8-10 (out of 10). The Desura web page includes a Vimeo version of the Lab’s last video promo for Patterns, which appeared back in early July. This is actually quite stylish and something of a departure for the Lab video-wise (as have their Blocksworld promo videos – have they hired in a new team for marketing, or are the Boldai team having an additional impact? :P). 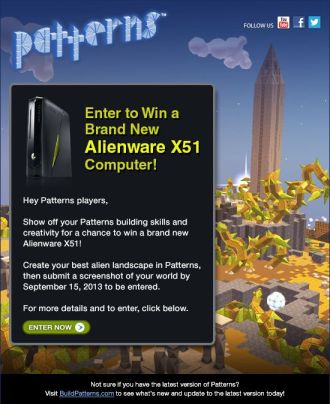 While I may not have received notification of Pattern’s arrival on Desura, I did receive an e-mail notifying me of Patterns-based competition the Lab is running in conjunction with Dell / Alienware.

The competition appears to have launched on August 12th, and is linked to via the Patterns website, Patterns on Desura and Patterns on Steam. On offer to the winner is an Alienware X51 gaming desktop.

Entrants to the competition are required to design and construct a unique alien landscape within Patterns using the in-game shapes and abilities offered in the game and then upload a screen shot of the build to the Alienware competition web page before September 15th, 2013.

An Alienware Arena account is required to enter the competition, and as has ben the case in the past, the competition is only open to legal residents of the United States (other than Rhode Island and US Territories), and entrants must be 13 years of age or older. The winner will be selected through a split between public voting (open to Alienware Arena members) and “Expert Judging”, and based on a combined score from both. Judging criteria will be on the originality / creativity within a build and relevance to Alienware / Dell.

Further details on the competition can be found on the Alienware Arena Patterns Competition page, as can the Contest Rules.