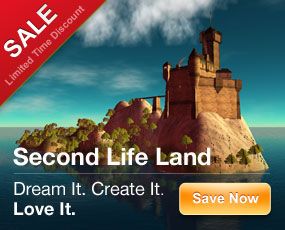 Note: there is now further information available on the total number of sims leased as a result of the sale.

I had doubts that the weekend’s Land Sale would prove popular among independent users and smaller estate owners. Rather, I thought that if it had any appeal at all, it would be with the larger estates.

I was completely and utterly wrong on both counts.

As Tyche Shepherd reveals, during the offer period, some 322 private regions were leased. Overall, this resulted in a net growth in private regions of some 311 – around 300 more, Tyche estimates, than might otherwise have been the case.

The 322 regions added to the grid currently comprise:

So, what does this mean? Certainly, it is a braking (I wouldn’t go so far to say “reversal”) of the recent private region losses. Whether this remains so will only be seen in the release of figures over the weeks.

In terms of stemming LL’s revenue losses resulting from the fall-off in private regions, it tends to demonstrate that far from having to take “drastic” action as some have been demanding, LL actually need to do very little. Just imagine how many more sims might have been leased had the offer run for a week, or how well another such sale would be received if run, say, some time early in the New Year. Of course, whether such promotions have benefit beyond the balance sheet is quite another matter.

Certainly, the sale has generated a lot of debate around abolishing the set-up fee altogether. Some were actually making the call even before the sale was over, and the success of the sale would seem to support them. But abolishing set-up fees is not without risk; many have been reporting for a good while now that they are finding it increasingly difficult to “offload” sims due to the $100 transfer fee. Abolish the front-end set-up fee for new sims on a long-term basis, and this situation could get very much worse.

Perhaps the middle ground would be for LL to restructure (i.e. reduce) the front-end set-up fee while at the same time abolishing the sim transfer fee for “used” sims. Assuming contractual obligations with their co-location hosting company would allow this to happen, one might suggest that dropping set-up to the cost of tier might be a happy medium (so a full sim would cost $295 set-up + $295 tier, for example), alongside of transfer fees being dropped altogether.

When looking at the set-up fees, one has to say there does appear to be a gross imbalance, which suggests there might be some room for manoeuvre here. What is it about a full sim that makes the cost of setting it up some 2.5 times greater than the fee for setting-up a Homestead? At the end of the day, surely, both are more-or-less the same in terms of software, and both have to go through the same load, configuration and test processes prior to being released to the customer. As such, one would have thought that actual costs involved for both would be more-or-less comparable.

At the end of the day, however, what this sale has demonstrated (besides being very good for LL’s balance sheet) is that when given the right incentive, there is still a healthy market willing to invest in new sims. As such, it’s far to call the promotion a success. Nevertheless, whether it has itself been beneficial to the SL land market as a whole is another matter entirely. That is only likely to be known in another two or three months time via Tyche’s on-going grid surveys.