Skip to content
The US Congress has approved NASA’s request or funding to extend International Space Station operations through until the end of 2030. However, this does not mean the station’s future is necessarily set in tablets of stone.

The approval came not through NASA’s core budgetary process, but as a result of an additional NASA authorisation bill being appended to the newly passed Creating Helpful Incentives to Produce Semiconductors (CHIPS) Act of 2022, intended to increase semiconductor manufacturing in the United States in the wake of pandemic-induced supply chain shortages.

The authorisation bill included in the act specifically targets NASA to receive funding to support ISS operations, and to further the agency’s lunar ambitions and robot exploration of Mars. In addition, the 2023 Commerce, Justice and Science (CJS) spending bill. currently being drafted in Congress, looks as though it will seek to provide NASA with the US $25.9738 billion it has requested for its 2023 operational budget – albeit it with one or two small strings attached. These include ensuring the asteroid-hunting NEO Surveyor mission launches in 2026 as planned, rather than slipping to 2028; cutting a part of the space technology spending that includes nuclear thermal propulsion work; and adding $50 million to support a new commercial crew provider beyond Space and Boeing to increase program options.

However, while paying the lion’s share towards ISS operations, the US relies heavily on the assistance of its International partners: a further 15 nations (Brazil having withdrawn in 2007), with both the European Space Agency (ESA) and the Japan Aerospace Exploration Agency (JAXA) providing core modules for the station, and the Canadian Space Agency (CSA) crucial support systems. While 14 out of the 15 (the majority operating under the auspices of ESA), the same cannot be said for the 15th – Russia, which is also the second largest financial contributor to the station, as well as the largest contributor of pressurised modules.

Russia has long bulked at any attempts to extend ISS operations beyond 2024, and while it appeared that a shorter extension to the station’s life to take it through to 2028, that was thrown into doubt in early 2021, when the Russian space agency, Roscosmos, announced that a module – the Solar Power Module-1 (SPM-1, also referred to as NEM-1) – due for launch in 2024, would be repurposed to serve as the core power module for a new, smaller, all-Russian space station, provisionally called the Russian Orbital Service Station (ROSS). 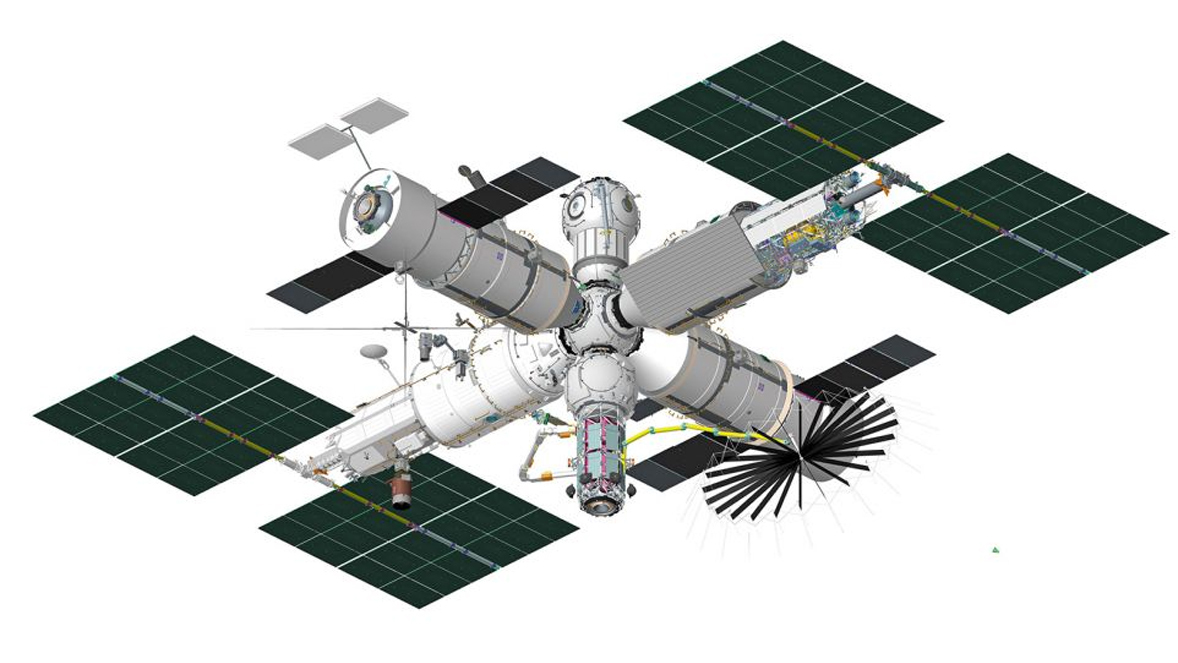 The Russian Orbital Service Station, as rendered during a recent presentation by Vladimir Solovyov, chief designer at RSC Energia, and the director of Russian involvement in the ISS. To the left and right, with the large four-panel solar arrays are the two core modules for the station. To the left foreground and right background as the additional science modules. Credit: RoscosmosAt the time, it was indicated that work on ROSS would commence in 2024 and conclude around 2029. However, that time line was then pushed back to 2030-2035., possibly signalling Russia would remain fully engaged in ISS operations through until 2030. Then came the Russian invasion of Ukraine, international outrage, condemnation and the rest. This included assorted (and somewhat silly) threats on the part of the then head of Roscosmos, Dmitry Rogozin, which included statements that Russia would depart the ISS in 2024 – and might take parts of it with them…

While Rogozin has now departed Roscosmos for pastures new, his replacement at the agency, his replacement – equal hardliner Yuri Borisov – Has sounded something of a warning that attitudes towards ISS operations have not shifted, telling the TASS news agency that Russia’s engagement in ISS will come to an end “after 2024” – the date to which the committed to support the station.

Exactly what “after 2024” means in practice remains unclear. ISS partners are obligated to give at least 12 months warning of an intention to depart the project – and Russia has never taken that step through to now, and it could be argued that 2030 is as much “after 2024” as 2025.

That said, coming on the heels of Borisov’s comments to TASS, Vladimir Solovyov – who is both the chief designer at RSC Energia, the company responsible for developing space station modules and the director of the Roscosmos department directly responsible for ISS operations – presented the first detailed overview of the proposed ROSS platform, including the fact that the first modules are to be operational by the end of 2028.

While not explicitly named by Solovyov, the first of these modules appears to remain the re-purposed SPM-1 / NEM-1, Solovyov indicated would launch in 2026. This will then be followed in 2028 by a Core Crew Module (CCM – this nomenclature will likely change), providing crew living facilities and additional power systems, with the two units operating as a baseline station until two additional science modules can join them in 2030.

This tends to indicate that from 2025, Roscosmos will start pivoting priorities away from ISS and to ROSS; but it does not signal they will be ending all involvement in ISS. Further, and while again not indicated by Solovyov, the fact that the science modules will not be flown until 2030 might be indicative that consideration is being given to perhaps utilising the Nauka module, which only joined the ISS in 2021 and which is capable of its own propulsion, within ROSS.

This might come down to the orbit ROSS eventually placed within. During his presentation Solovyov stated the some of Russia’s frustrations with ISS is that the station operates at an orbital inclination that precludes much of the Earth and space science Russia would like to carry out. As such, a wide range of potential orbits are being considered for ROSS, some of which would exclude any transfer of Nauka from ISS to ROSS.

As well as the four core modules, Solovyov indicated that the station’s facilities could be expended through the use of a (yet-to-be built) large-scale automated re-supply vehicle that could perform a number of roles from straightforward delivery of supplies and consumables through performing required orbital boosts to offering temporary additional working space when needed. It is additionally possible this re-supply vehicle might be combined with a capsule-like crew vehicle, allowing it to deliver both personnel and supplies to the station, with dedicated crew-only flights to and from ROSS carried out aboard a smaller vehicle intended to replace the veritable Soyuz

Most interestingly, Solovyov  stated ROSS would not necessarily be permanently crewed, but will utilise a high degree of automation for science operations, with crews visiting it to carry out very specific science research and / or to collect data and carrying out maintenance and other work. However, as he also indicated that the station could well form a part of Russia’s ambitions for the Moon and Mars (some of least at which will likely include working with China), the station could become more fully crewed from 2030 onwards.

In May I wrote about the proposed ESA / NASA Mars Sample return mission to bring core samples gathered by NASA’s Perseverance rover back to Earth for analysis. At the time of that report, NASA and ESA were responding to calls for the mission to be prioritised and take place earlier than the early-to-mid 2030s. However, the plan being forward back then stuck me as being overly complicated, involved six vehicles and three individual launches; and bless them, NASA and ESA now seem to share that view:  on July 27th, 2022, the two agencies issued an update that reduced the mission to just two launches and changes the overall line-up of vehicles involved, although the fine details have yet to be worked out.

In the March-May plan, Perseverance would have deposited a cache of core sample tubes somewhere in Jezero crater. This cache would then be targeted by two landers – one carrying the Mars Ascent Vehicle (MAV), and the other a small, European-built “fetch” rover. This would collect the sample tubes from the cache and deliver them to the MAV, which it turn would launch from its lander to carry them up to a waiting Earth Return Vehicle (ERV) built by ESA, with the sample tubes transferred to that vehicle for the return to Earth.

Under the new plan, the ERV remains, as does the MAV and its lander. However, the “fetch” rover and its lander have been scrapped. Instead, the MAV will launch to Mars in 2028 and its lander will use telemetry from Perseverance to land in the vicinity of the rover, which will then drive to the MAV and perform the transfer of samples directly.

Exactly how this transfer will be managed is unclear – Perseverance isn’t exactly designed for such a task. So, as a contingency, the lander carrying the MAV will carry will also be equipped with two “Ingenuity class” helicopters. Fitted with wheels and a small grappling arm, as well as flying, these will be capable of scooting around on wheels, collecting sample tubes from the cache rack Perseverance will deposit on the surface of Mars and delivering them to the MAV. Once loaded, the MAV will launch to orbit, rendezvous with the ERV, and the sample pack transferred for its return to Earth.

Overall, the approach is still somewhat complicated, but assuming a methodology can be employed to allow Perseverance to complete the sample transfer to the MAV unaided, it means NASA will have two fresh helicopters available to support the rover in its further explorations in and around Jezero Crater. And even if the helicopters do have to be used for sample retrieval, by combining them with the MAV and its lander, an entire additional launch – and the development of a complex small-scale “fetch” rover – can be avoided, both reducing the overall cost of the mission and reducing the potential for long-term delay which might occur with the development of an entirely new class of rover.

Which is not to say the target 2027 launch date for the ERV isn’t itself challenging; three years to develop and test a space vehicle is an extremely short time-frame; as such it would seem likely this mission will slip back into the early 2030s.