The James Webb Space Telescope (JWST) has completed deploying all of its major components whilst en route to its operational orbital position at the Earth-Sun Lagrange L2 position.

At the time of my last update, NASA was expected to start work on tensioning-out the layers of the observatory’s layered sunshield. However, this was delayed in preference of working on JWST’s power subsystem. The decision came as a result of telemetry showing the observatory’s solar arrays were not producing their anticipated output due to them operating at their factory defaults. After re-balancing them, engineers took the opportunity to gather a baseline of power requirements for future reference, and to ensure the motors that are key to the sunshield tensioning process were at their optimal temperatures prior to starting the tensioning operation.

The work on the power subsystem meant that tensioning operations did not start until January 3rd. This comprised each of the hair-thin layers of the sunshield being gently tensioned out and separated from the other layers to allow it to function most efficiently in absorbing / reflecting heat and sunlight. By the end of the 3rd, three of the five layers had been correctly tensioned, putting the operation well ahead of schedule, allowing the operation to be completed with the tensioning of the last two layers on Tuesday, January 4th.

This left the way clear for the deployment of the observatory’s secondary mirror system. Commencing on January 5th,  this involved unfolding a series of booms called the Secondary Mirror Support Structure (SMSS) to extend the secondary mirror assembly out in front of the primary mirror, allowing it to gather and focus the light from the primary back through an aperture at the centre of the primary, where a third mirror reflects it down into the observatory’s interior and to its instruments.

On January 6th JWST deployed the radiator systems that serve to remove excess heat from the observatory. Stowed flat against the rear of the main mirror assembly, the radiator panels were successfully extended out and away from the body of the observatory, freeing the mechanisms required to unfold the two “wings” of the primary mirror.

At 6.5 metres in diameter, and comprising 18 hexagonal gold-covered segments JWST’s primary mirror is too big to fit in the payload fairings of any operational launch vehicle, thus the use of the two “wings” to the port and starboard sides of the mirror.

Work started on unfolding these on January 7th, commencing with the port wing. The operation commenced at 14:30 GMT, the wing unfolding in five minutes  – although latching it into place took a further two hours. A similar operation was then initiated on January 8th to deploy the mirror’s starboard wing, with telemetry received at 18:17 GMT to confirm it had locked into place in its deployed configuration.

In all, this will take some five months to complete; the first part of which involves correctly align the 18 individual mirrors that make up the observatory’s primary mirror so that they all work in concert to gather and reflect light into the secondary mirror. This is a multi-step process, in which each of the 18 segments is gently adjusted by means of 6 actuators located behind it to ensure proper alignment – with the secondary mirror also having actuators that allow minute adjustments to be made to it, assisting the alignment process whilst ensuring the gathered light remains correctly focused on the non-moveable third mirror. It is not an easy process, the work is expected to run the full 120 days of the commissioning period.

In the last instalment of Space Sunday, I mentioned some of the forthcoming missions planned for 2022. In addition to those I mentioned then (limited by space), here are some more – all of which I hope to cover in more detail as the year progresses.

The Biden administration  has formally supported extending operations of the International Space Station through the end of the decade, an announcement that is neither surprising nor addresses how to get all of the station’s partners, notably Russia, to agree on the station’s future.

NASA has wanted to continue operating the ISS through until 2030 for several years, but has lacked outright political support to do so. In 2018, the US Senate agreed to extend US ISS operations through until 2028 or 2030, but the move failed to gain the required two-third House majority in order to pass. Support from the White House may help the agency gain full US support for the mission, and as a result of it, the European Space Agency has further indicated it would seek a resolution among members to continue to fund their side of station activities.

However, the major sticking point for operations lies with Russia. Most of the Russian modules on the station are growing increasingly old and subject to failure, and as such, Roscosmos is reluctant to continue supporting operations beyond 2024. In addition, geopolitics may impact the future of the ISS: Russia has already announced plans to operate its own space station at the expense of continued international cooperation with the ISS.

On Thursday, January 6th, a large robotic arm on China’s space station successfully grasped and manoeuvred a cargo spacecraft in a crucial test ahead of upcoming module launches. 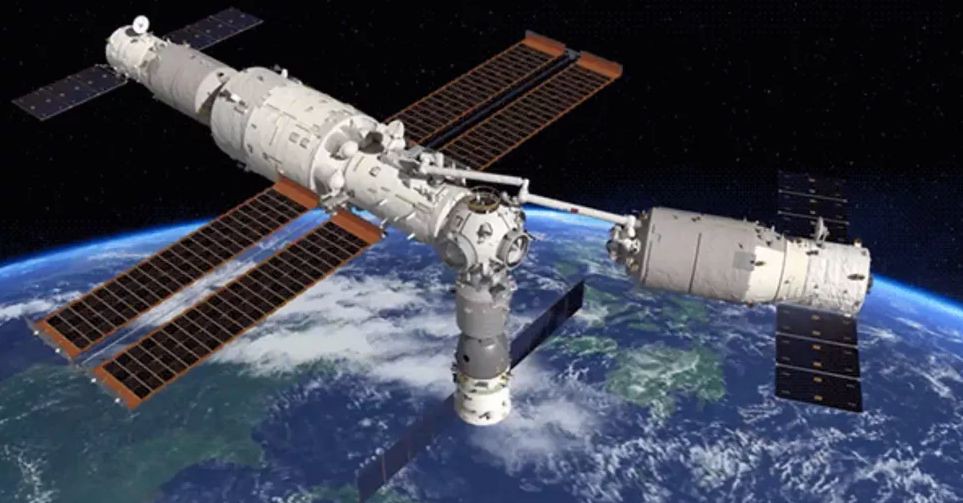 An artist’s impression of the robot arm test on the Chinese space station. Credit CMSAThe 10 metre long robotic arm on the Tianhe-1 module of China’s new Tiangong space station was used to grasp Tianzhou-2 supply vehicle that has been docked with the module since the end of May 2021, and move out away from the station, angling it through 20 degrees before returning it to the Tianhe-1’s forward docking port, where it reattached itself.

The 47-minute operation began at 22:12 UTC, as was designed to test the robot arm’s ability to manipulate and move large modules that will form a part of the station as it progresses. In particular, the test is vital to China’s plans to launch two science modules – called Wentian and Mengtian – to dock with Tianhe-1 in May / June and August / September 2022 respectively, thus completing the Tiangong space station.

One January 1st, 2022, the Hubble Space Telescope (HST) achieved another milestone in its distinguished career – notching up 1 billion seconds in orbit since its launch on April 24th, 1990. That’s 31.7 years of near-continuous operations in Earth’s orbit.

A joint NASA / ESA project, HST has contributed massively to our understanding of the solar system, our galaxy and the universe as a whole. Despite recent issues with the observatory, it is hoped that HST will continue to operate through the 2020s and well into the 2030s.