Interaction is very much a theme for this release, as is helping new users feel more at home, as well as providing a point of entry when logging-in to Sansar at the start of a session. The release also includes a very long list of scripting updates, some of which are to support the new interactivity functions.

This article is designed to provide an illustrative summary of the release, but do note the lack of an VR headset and controller on my part means that any features described in detail here are looked at from the Desktop Mode.

At the time of writing, there were no release notes available, only a release blog post. Whether this actually constitutes the release notes or not, I’m not sure – so a check on the Sansar Help page might be in order to see of any release notes appear. Similarly, in checking the scripting API documentation, it appeared this documentation was also awaiting update. so again, a check should be made for the addition of information on the new API elements and script updates.

I’ll start with Home Space, a new “home location” so to speak. All users are dropped into Home Space, which resembles an open-plan skybox like apartment with three “rooms”, either when logging-in to Sansar for the first time or at the start of a new session (so in the latter regard it both appears as the back-drop image when logging-in to Sansar and replaces being dropped into the Atlas at the end of the log-in process).

As a physical environment, you can walk around your Home Space, sit on the chairs (albeit it using the teleport > /sit “cheat” and – for new users in particular – offers a starting point for the new UI tutorial (see below for more on this). 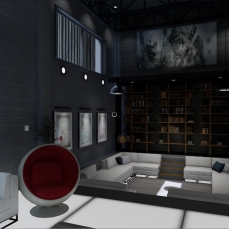 Images of the new Home Space taken in Sansar’s new “mouse look” view, showing the various areas. Note the “under construction” teleport portal, also shown enlarged in the last image, that will link Home Spaces to an upcoming new social hub experience. click on any image to view slide show

Note that Home Space is only accessible (for the time being?) when logging-in to Sansar at the start of a session; there’s no option to go back to it once you’re entered an experience, unless you re-log. Should you edit your avatar’s appearance (Create > Style My Avatar) from within an experience, you will still go to look Book and then back to the spawn point for the experience at the spawn point, as per previous Look Book behaviour.

Within The Home Space there is a hint of things to come: on one wall, and marked as “under construction” is the entranceway to the upcoming “Social Hub”. Reached via automatic teleport, this will be a new experience people can jump to and mingle, again with the intent to make it easier for newcomers to meet others. Some of the objects in the Home Space can also be grabbed, allowing basic interactivity to be tried – although the random nature of the tutorial pop-ups perhaps makes this a little hit-and-miss.

The new UI Tutorial is designed to help new users start to understand the Sansar Client UI (although it will also display for existing users logging-in to R28 for the first time). The tutorial comprises a selection of pop-up displays to controls and yellow hover tips that are displayed within the client. These can be displayed in both the Home Space and within initial experiences a new user visits.

The tutorial – while a good idea – seemed to be somewhat random. It’s wasn’t until my fourth log-in, for example, that I saw the pop-up for grabbing items. While not vital, given there are objects in the Home Space that can be grabbed, making this a little more predictable (coming up with the Walk and Teleport pop-ups, perhaps?) would perhaps be more useful.

New to both Desktop and VR modes for Sansar is the Avatar Emote menu. Access via the Socialise button (or CTRL-E in Desktop Mode), this displays a “dial” pop-up, with the available emotes (aka gestures or animations) on the right, and any emotes you may have already used in your current log-in session displayed on the left (if you have not used any emotes, this area will display an alarm clock like icon).

Emotes are selected from the right of the menu, by scrolling up / down through them and clicking on the desired option. Recent emotes (if displayed) are accessed the same way. For VR users, an added bonus is that moving your head or arms will no longer cancel a playing emote (just walk forward, as per Desktop mode).

Note that the chat commands (“/sit”, etc.) are still fully supported, as is the ability to assign custom emotes to replace the default options.

R28 brings a new level of weapons use to Sansar for games, etc. It includes a complete new script API that allows scripts to detect VR inputs, mouse clicks and what the player is targeting when any input is hit. Alongside of this additional SPI have been added for Ray/shape casting for use with weapons. Also, a new set of Simple Scripts have been added (Game.Gun, Game.Target and Selector) to allow weapons to be easily added to a scene.

In VR mode, weapons can be fired using the controller triggers, in Desktop mode, a new Mouselook mode has been added  (see below) to make aiming and firing easier. Also, to allow for consistent weapons holding, Grab Points can be toggled so a left-click (or equivalent) will not result in a weapon being dropped / thrown.

Enabled and disabled via the ESC key in Desktop mode, Mouselook allows for easy aiming of weapons and an easier means of looking around. When enabled Mouselook will:

Avatars can finally sit in Sansar without the need for the teleport + /sit “cheat”. Currently only available with static objects, much like “Grab Points” creators can now designate “Sit Points” on object, while in Edit Mode. When a user then clicks on a sit point in an experience, their avatar is teleported to the sit point, where a default sit animation is used, placing the avatar seated in the set orientation.

The following updates / changes / fixes are also a part of the R28 update:

The Home Space is potentially a good move. The Atlas has never been the friendliest of places to start time in Sansar when you’re a relatively new user, and having somewhere that can be called “home” might help with comfort levels. Right now it is limited in functionality – you can’t practice manipulating objects, for example, and there is no way to get back to it once you’ve started using the Atlas. The latter perhaps isn’t vital to the function of Home Space, but would be a nice addition for those who might wish to “park” their avatar while AFK, rather than leaving them within an experience.

It would also be nice if the Home Space and the tutorial were better integrated (as noted in the section on the tutorial above), and I would hope that options such as the Sit Points feature will be enabled in the furniture within the Home Space in the future. Allowing new users to play / experiment within a private space (without going too overboard with things) could help increase confidence and comfort before newcomers venture into the wider worlds of Sansar.

The ability to use weapons / weapons controls is liable to prove a popular addition for games creators, and I’ll be looking to see what comes out of this over the coming weeks.

Overall, I can’t help but feel it might have been better for Linden Lab to hold off their Steam integration until after this, and the previous two releases had been made. If nothing else, and with a sufficient grace period (a month?) given, it might have allowed creators to build more in the way of interactive game-based experiences of the kind that LL believe would attract and retain Steam users.

That grumble aside, a pretty good update offering some much-needed capabilities, together with features that will (hopefully) be built upon.