Officially opening at 13:00 SLT on Saturday, April 11th, at the Influence Art Community is a new exhibition of fractal art by Gem Preiz.

“I spend my time amazed with the extraordinary detailed patterns of the fractals, as well as their incredible diversity,” Gem says of his work. “From my explorations in this fascinating universe, I bring back digital images that I have been displaying on SL for two and a half years, using them to illustrate themes which inspire me.”

The result is a series of pictures which come together under the title Rhapsody in Blue Fractals, which Gem uses to form a narrative tracing the story of the universe through to humanity’s arrival and our attempts to fill it with our own creations.

The pieces  – twenty in total – are displayed two and three at a time through a series of rooms hanging in space, a single blue walkway running between blue-framed doorways providing the means of progress from one room to another. The choice of blue is deliberate, as Gem notes, “blue as the water from which life arises, as the sky and the air we inhale.”

Each piece bears its own title, giving a clue to its place in the story: Genesis, emerGence, BioloGy, and so on – the capitalised G another link to the blue theme and the title of the piece; Rhapsody in Blue being George Gershwin’s famous 1924 musical composition for piano and jazz band. And it is also, as Gem notes, a play on the first initial of his name, and the person to whom the exhibition is dedicated.

The pieces themselves are also rendered in blue, and each one is intricately detailed and quite beautiful in depth; so much so that time is really required to study and appreciate each piece fully – and even then, it is possible to come back and pick out yet more details on a subsequent visit.. They also represent something of a retrospective of the various styles of fractal art he has produced over the last 30 or so months, something which adds a further layer to the exhibition as a whole.

I’m not sure if there will be a music stream running once the exhibit formally opens, however GEM suggests three YouTube tracks should be listened to when visiting the exhibition, and having wandered back and froth through it with them playing, I tend to agree with him:

Oh, and when you reach what appear to be the end of the blue path and are facing the last image – trust to fate and step off the edge; there’s a little surprise waiting, which is perhaps itself a commentary on the possible cyclical nature of the universe! 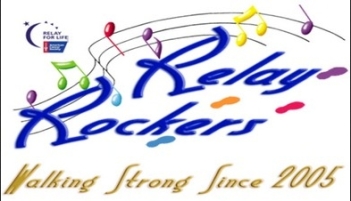 2015 will see the return of RelayStock, a weekend of Peace, Love, hope and great music, all in aid of Relay for Life of SL.

Hosted by the indomitable Relay Rockers team, RelayStock, SL’s very own update on Woodstock, will this year take place on Saturday, May 23rd and Sunday, May 24th at Relay d’Alliez, and is billed as the largest multi-team event in the 2015 RFL of SL fund-raising season.

RelayStock will provide team camp site with either a tent or a minivan, all located around a 60’s style festival stage, and the weather and conditions will be typically “Woodstockian” – so expect rain and mud as well as dancing and fun!

An open invitation has been given to Relay Teams to come along and support the event.  Team can do so by completing the reservation form, in which they can reserve a camp site where they can set-up their kiosks and vendors. In addition, participating teams can volunteer to host a DJ session on the stage of up to 2 hours in duration, and take part in the final round of the Relay Rocker’s Celebrate Remember Fight Back (CRFB) Top DJ Competition.

Those teams interested in running a DJ session over the weekend should indicate their interest in the reservation form, and note the time at which they’d prefer to host a session, which, at the time of writing, were (all times SLT): 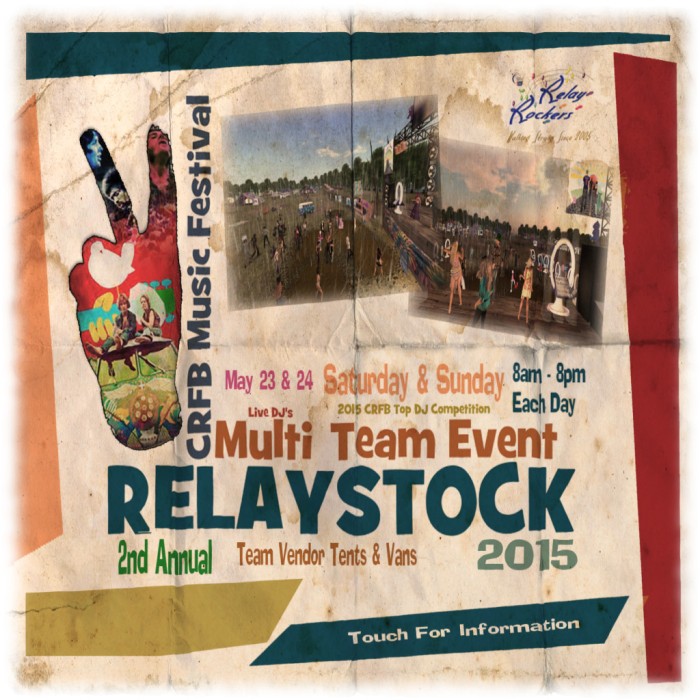 Special Events for the Weekend

The complete schedule of events is still being drawn-up, but highlights include:

Commenting on the event, Rockers co-founder Trader Whiplash said, “The Relay Rockers have been fortunate to have participants from many teams in our CRFB Event. RelayStock is our way of saying thank you for the huge support across the grid for the competition.  It  affords every team the opportunity to share in a super fund-raising event. This is just another example of the One Team concept in Relay.  It doesn’t matter whose kiosk or vendor the donations land in, after all we are all on the same team in the end.”

Such is the nature of RelayStock that, in 2014, more than L$ 1.5 million was raised by some 50 teams over the course of the weekend.

So, whether you’re part of a Relay Team or not, make a note in your diary of the dates. All things being equal, and with trader’s support, I’ll have a special preview of the event ahead of the weekend itself.

RelayStock will take place at Relay dAlliez, a region dedicated to the memory of dAlliez Estates estates founder Alliez Mysterio, who along with Nuala Maracas and Trader Whiplash, helped found the Relay Rockers team in 2005. Alliez was lost to breast cancer in 2013.  The region was first made available in 2014 to any Relay Teams wishing to host their own RFL of SL fund-raising events.

Currently, there are still several prime weekend dates open in the 2015 RFL of SL season which can be used by Relay Teams to host their own events. Representatives from teams interested in doing so can visit the Relay dAlliez InfoHub for more information and to submit a reservation request.