The 2015 SL Christmas Expo opened on Thursday, December 3rd, 2015 and will run through until Monday, December 14th, 2015. As usual, this annual event offers something for everyone, including the opportunity to help raise funds for Relay For Life of Second Life, an official charity of the American Cancer Society.

Taking place across four regions, the Christmas Expo is supported by many top designers and brands from across SL, and offers visitors a great seasonal shopping experience coupled with a range of entertainments taking place throughout the Expo, together with a some very special events, including:

So, be sure to get into the festive spirit and support RFL of Sl by visiting the 2015 Xmas Expo and supporting RFL of SL.

All regions are rated Moderate. 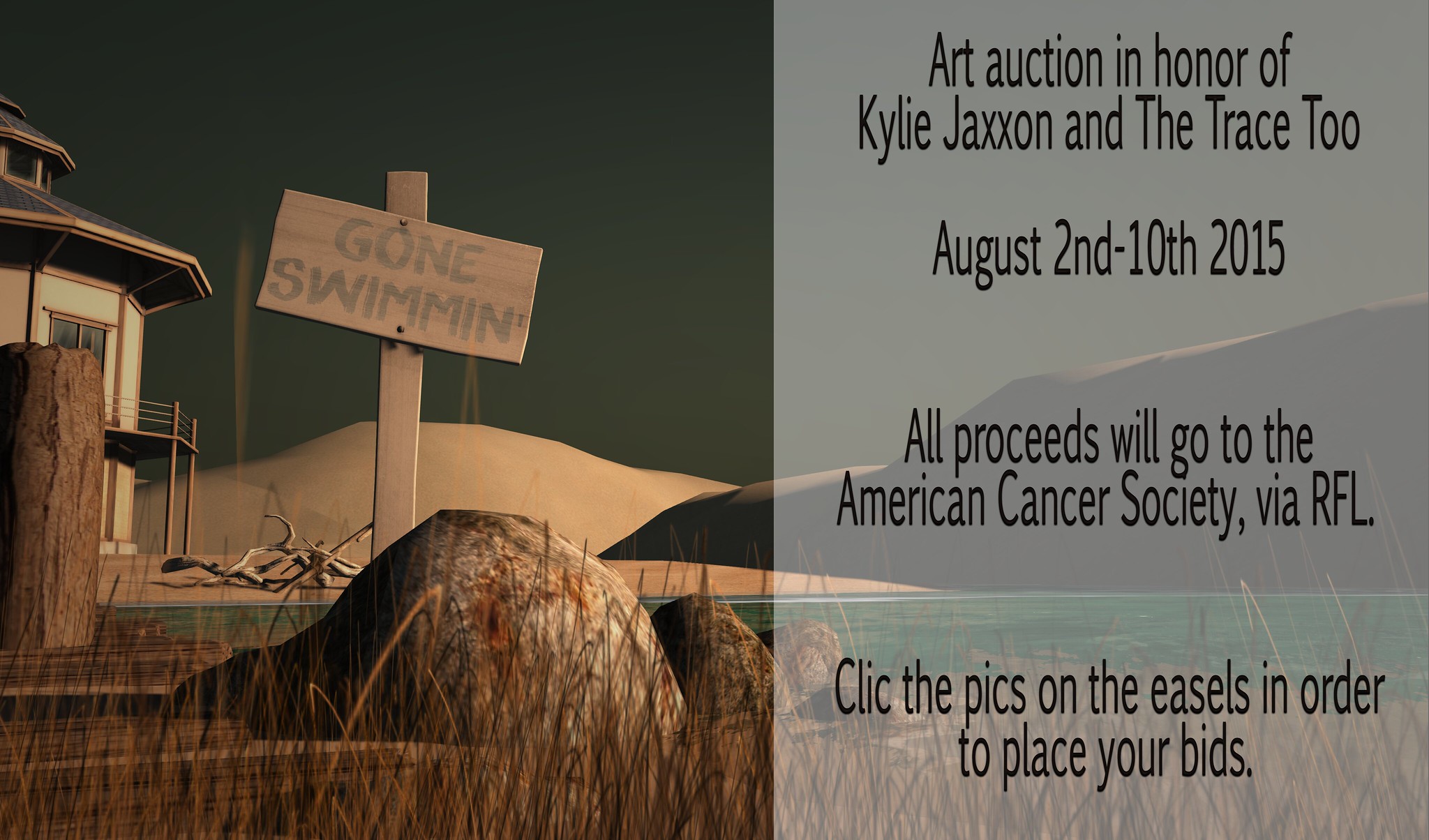 The Trace Too auction poster, Trinity Yazimoto, On Flickr

Update, August 6th: As reported by Ziki Questi, Kylie has made a return to Second Life, dispelling the major concerns about her welfare. “I am alive and well for the time being, and my intention is to keep The Trace going,” she told Ziki, before going on to express her thanks to all those who stepped forward in her absence to support The Trace Too. She also said the current auction to benefit ACS will continue. See Ziki’s post for more.

Now open, and running through until Monday, August 10th at The Trace Too, is a special art auction in honour of Kylie Jaxxon, with all proceeds going to the American Cancer Society via RFL of SL.

In 2014, Kylie was diagnosed with leukaemia, forcing her to withdraw for a time from Second Life and focus on her health and treatment. The Trace Too came about as a result of her positive response to that treatment, and her return to activities Second Life.

More recently, however, Kylie sparked concerns as to her well-being among close friends when she suddenly departed Second Life, with the closure of her account and her blog. As a result, a group of friends,  led by Hippie Bowman, Lenni Foxtrot and Trinity Yazimoto, stepped forward to organise a special art auction, the focus of which is explained in a note posted to Trinity’s Flickr stream:

In honour of Kylie and her gorgeous work that has touched the Second Life community, there is an art auction at her sim to celebrate her talent, and wish Kylie a fabulous and final farewell:

The auction was originally intended to raise funds to keep her beautiful sim, The Trace, open until the end of August. Due to people’s generosity this goal has already been achieved, what an amazing result!

With this in mind, all proceeds from the art auction will now go to Relay for Life in Kylie’s honour.

Each artist has contributed one or more pieces, which can be found alongside the locations where they were taken, Bids can be placed against pictures by clicking on them and stating the bid amount in local chat.

If you have enjoyed Kylie’s creativity in, and contributions to, Second Life through her work at The Trace and The Trace Too, and through her blog, please do hop over to The Trace Too for a final explore and consider bidding on the art items displayed there.

Thank you Trinity, Hippie and all involved in the work to keep The Trace Too open just that little longer, and in bringing this auction together. And a very special thank you to Kylie for sharing her talent, vision and creativity with us all, and her generosity in allowing us to enjoy her landscapes.

The RFL of Second Life Relay Weekend for 2015 is upon us, and will feature everything one would expect from the event – walks, celebrations, remembrances, the luminaria ceremony, interviews, music, dance, and more. Over the years, RFL events in Second Life have raised over US $2 million to assist the American Cancer Society in its efforts to eradicate cancer, and the hope is that this year will push the total past the US $2.5 million mark.

I’ve been fortunate enough to have a couple of sneak peeks around the regions that make up this year’s walk, together with the activities regions, and they really are quite extraordinary this year, featuring some stunning builds and themes which are truly eye-catching.

Listed below are some of the main events scheduled for the weekend – but remember that there are relay laps, entertainment and more going on across the entire weekend. All times are, as usual, SLT.

The Luminaria Ceremony and Fight Back

At 21:00 SLT on Saturday July 18th, the Luminaria Ceremony will talk place. The track regions will all be set to midnight and thousands of luminaria will be lit, each one representing a survivor or someone who has passed away from cancer. People are invited to walk the track in silence for one hour as dedications are read over the broadcasting stream.

06;00 SLT on Sunday July 19th will mark Fight Back. Join your fellow residents in making fight back pledges to save a life this year; your own, a friends, a family member, or someone you don’t even know yet.

There is no central welcome area this year, so probably the best place to start is at the American Cancer Society region. Here you can find out about the Luminaria lanterns, details of this year’s theme hours and grab a box of freebies. Information Stations are located in each of the relay regions, where you can grab your track tools to record the distance you walk around the track and allow you to chat with friends and those around you and walk at the same time.

So – are you ready to Relay?

The Relay for Life weekend is fast approaching in Second Life. Taking place over the weekend of Saturday July 18th and Sunday July 19th, 2015. Over the years, RFL events in Second Life have raised over US $2 million to assist the American Cancer Society in its efforts to eradicate cancer, and the hope is that this year will push the total past the US $2.5 million mark.

The weekend will feature everything one would expect from the event – walks, celebrations, remembrances, the luminaria ceremony, interviews, music, dance, and more. Already the regions, which I’ve been fortunate enough to have a sneak peek around, are taking shape and promise something truly extraordinary for 2015.

One of the features of RFL of SL has been the telethon. However, this year, the organisers are doing something a little different, and a call for volunteers has gone out, as reported by Saffia Widdershins in the Prim Perfect blog:

This year we’re trying something new – rather than a Relay for Life Telethon, we’re asking people across the grid with machinima and streaming experience to join us in a crowd-sourced experiment.

If you have skills to offer in film and editing, and would like to create (or work on) a machinima featuring the people and events surrounding this year’s Relay Weekend, contact us by filling in the form below with your details. If we can help (for example by setting up interviews, by arranging accreditation), we will.

The idea is that all the films will eventually appear on a single You Tube channel. You can put your credits on your video – we will give you a special title screen to add so that you can clearly be identified as part of the project.

In particular, support is being sought from cinematographers, sound recordists, those able to edit video and / or sound,  and anyone willing to interview those participating in the weekend.

Opportunities are on offer to film specific aspects of the weekend (and the days leading up to it, in order to document the preparations, etc.), and to indicate when you’d prefer to offer your services (over all or part of the weekend, in the lead-up, and so on.

Saturday, July 4th is a special day for the United States, and Sail4Life plan to celebrate it in a special way – and are giving an open invitation to anyone to join them in doing so.

Blast In the Blake is a day of music, celebration and dance that’s being organised and hosted by the Sail4Life team. The event will take place on a special stage, complete with mooring areas for boats (and even helipads for flying in guests, I understand!), which will rise from the seas at Blake Sea – Haggerty especially for the event.

Things will kick-off at 11:00 on Saturday, July 4th, and run through until around 16:30, with the schedule (at the time of writing) reading thus – all times SLT:

Those wishing to attended are invited to teleport in, or to sail over and moor alongside. All donations received through the event will go directly to Relay For Life of Second Life.

So, why not don your beachwear and slip on your shades on Saturday, then hop or sail on over for a Blast on the Blake, and support RFL of SL with Sail$Life whilst celebrating July 4th?

Note the SLurl in this article will not be valid until the event itself – so be prepared to make a splash if you use it beforehand! 🙂

Starting on Saturday, June 20th, and running through until Saturday, June 27th, Builder’s Brewery are, along with partners the  Relay Wizards Team, hosting a series of events to help raise money for RFL of SL 2015.

The focal point for the fund-raising is a silent art auction, which kicks-off at 13:00 SLT on Saturday, June 20th with a party featuring DJ Magnus Brody. Throughout the week, and across the Builder’s Brewery regions, art donated by artists from across Second Life will be offered for silent auction – simply click to bid. All funds raised will go to RFL of SL.

Also occurring throughout the week – so keep an eye on the announcements – will be Jail’n’Bail and the opportunity to drop well-known figures in the Dunk Tank, including the Brewery’s own Sensuous Maximus, who will be facing a dunking on Thursday, 25th June between 14:00 and 17:00 SLT!

With parties and a Poetry Slam as well (see further down in this article), key events and activities for the week comprise (all times SLT):

The Poetry Slam contest on Friday, June 26th doesn’t carry an entry fee, but those wishing to participate will be asked to make a donation of at least L$100 to RFL of SL in order to be eligible for any of the prizes on offer. Those who prefer not to make a donation can still participate and read their poetry, but will not be eligible for the prizes.

Please make sure you register for the contest ahead of time!