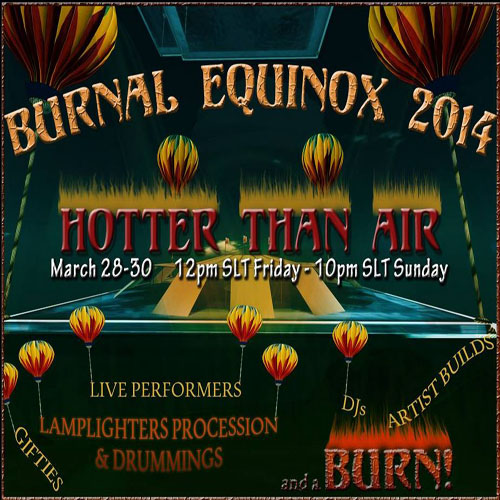 The BURN2 team have announced the 2014 Burnal Equinox, which will take place between Friday March 28th and Sunday March 30th inclusive in the playa regions, and are inviting people to participate.

The title of the event is Hotter Than Air, and it is accompanied by a novel backstory, which reads in part:

At a time far into our future, the earth has been devastated by a multitude of scourges: harsh climate change, pollution, famine, and war. The playa is one of the last inhabitable places on earth, but toxic fumes cover the ground and rise to 100 meters. The only safe living environment is above the toxic gas at ground levels as the playa’s winds help purify the air at this altitude. Passing through this toxic ground zone is possible, but long-term exposure can be fatal.

One redeeming factor of the toxin is that when it is captured, placed into a balloon and mixed with the correct proportion of playa dust, it takes on the form of a very powerful, lighter-than-air gas.  A single five-meter balloon can lift thousands of pounds into the air.  The gaseous concoction has been fondly named Fairy Dust.

So it is that the people in this far distant future have built a city in the sky – platforms suspended beneath great balloons filled with Fairy Dust, the empty air between them bridged by fantastical lighter-than-air machines. And in this multi-platform, multi-level environment, the people celebrate a renewal of life every spring, decorating their balloons and platforms.

In keeping with this theme, the BURN2 committee invite people to submit an application for one of their 32x32x40 platform spaces in the skies over the playa, where they can design and build their own lifting balloon and platform and be a part of the celebrations. Visitor to the event will be able to move between the platforms in transport balloons available on each platform (rezzers will be supplied to successful build applicants), adding to the flavour of the theme throughout the weekend.

Successful applicants will be asked to build a balloon and platform with a land impact no higher than 400, within a 32×32 metre area between 100 metres and 275 metres altitude, and no taller than 40 metres from base to top. Balloons can take any form, so long as they fit within the 32x32x40 area. Please refer to the Builder’s Guidelines for further information on requirements, limitation and suggestions for builds.

With the exception of the Welcome Area and Gerlach town, all builds for the celebration will be in the sky, including the Centre Camp, Lamplighters Village, and this year’s Burn Area, making this a truly individual celebration.

The closing date for applications is Monday February 17th, 2014.

On Monday January 27th, the Linden Endowment for the Arts announced the successful applicants for the 6th round of the LEA’s Artist-in-Residence (AIR) programme.

The LEA received over 40 applications, and those selected were viewed as presenting “truly outstanding proposals that represent a diverse range of virtual art.”

The successful applicants will each be allocated a full region within the LEA for a 6-month period. They have up to four months to prepare their projects, which range from full-sim immersions, to innovative builds geared specifically for multimedia works such as sound and machinima. Each installation must be open for a minimum of two months of the 6-month allocation, and it is expected that some will be open in advance of the four-month build deadline. All exhibits must be open to the public by the end of May 2014 at the latest.

All openings will, as usual, be announced in the LEA blog.

After a mid-season hiatus (as is the way of all good shows), The Blackened Mirror returned on Sunday January 26th with the latest instalment.

For those who may have missed things, and in the tradition of all good serials, here’s the story so far:

“It was a dark and stormy night. Suddenly, a shot rang out! A door slammed. The maid screamed!”

OK, ok. The Blackened Mirror isn’t written by Snoopy or nor is it riven by purple prose a-la Edward Bulwer-Lytton. however, it is a taut, Chandleresque TV series written by Da5id Abbott, featuring  a fine twist of Steampunk stirred into a mix of film noir and H.P. Lovecraft.

So, what exactly has been going on?

In the first season, we were introduced to 1930’s hardboiled PI from the City of Angels, Hardland Quinn. He’d been approached by the mysterious Ms Alais Alleyn (Aisling Sinclair) to help in the resolution of a certain “predicament” she faced – namely the recovery of a certain something she requires to ease her passage, and that of her strange companion, Mr. Biggins (Mavromichali Szondi),  “home”.

Initially unwilling to provide assistance, Quinn increasingly finds himself intrigued by the apparent contradictions in Ms. Alleyn, such as her American accent but use of British English and her decidedly Victorian her style of dress. As a result, he agrees to help them out, a decision he comes to regret as he finds himself taken on a journey through time and space – and into his own past. But by the time he does, he finds he has no choice but to see things through – a decision which leads to his capture by mysterious forces.

Season 2 rejoins the story with Quinn being held at the Redemption Asylum and under the somewhat sadistic thumb of his bespectacled doppelgänger, Adam. Unaware of how much time has passed, Quinn is unexpectedly freed from incarceration by Ms Alleyn and Mr. Biggins. Only their attempt at escape goes slightly awry as they find themselves facing the enigmatic Doctor, who sees Quinn as his key to immortality.

With more of Quinn’s own past emerging, the three use a timely distraction by Jacob Mitchell (Peter Jurasik), another part of Quinn’s mysterious past, to slip free of the Doctor’s clutches and find temporary shelter at Jacob’s house. Here the plot thickens a little more, although some questions are answered, such as how much time has passed since the final events seen in season one, and just what is Mr. Biggin’s first name actually is …

Reunions are interrupted, however, and Ms Alleyn, Mr. Biggins and Quinn are forced to make an escape using the resonator. But after the initial attempt requires Ms. Aisling to reset her device, Quinn makes a jump to Serph City … only to arrive decades into his future …

Now  the story resumes and we find that … well, rather than me spoiling it all by telling you, why don’t you watch the episode yourself? If you want to catch-up on things in full beforehand, you can watch all of season 1 and the aired episodes of season 2 through these options: The Blackened Mirror website, the show’s Treet TV channel, on Aview TV or on YouTube.