The Machine is the latest in the LEA’s 2013 Full Sim Art series to open, and will run through until the end of November. Located on LEA 6, the installation is by Lilia Artis & Moeuhane Sandalwood, and represents their view on what might happen if humanity seeks technological perfection above everything else. It presents, at first look, a self-fulfilling world where technology exists for the betterment of the human mind, and the human mind exists to maintain the machine – but is it really so?

The creatures have created a perfectly functioning world. They live in the ever-present. As a sound community. With joined minds and spirits. Interconnected. Completely. They run the machine – and are run by the machine. They are the machine. The peak of innovation. The end of evolution. Their creation.

They are a society without memory. Their history a mere shadow. Because there is no need to remember. Why remember what is of no value. They are perfect.

So states the opening description of the installation; and when you arrive, you get to see this perfection first-hand; in a technologically pristine environment sits the Machine, surrounded by the minds  that both gave birth to it and give it purpose, and who are given life and purpose by the Machine, in a closed  and chilling cycle, apparently devoid of past or future.

At what cost has this come? In the pursuit of perfection without thought of the consequences, what has humanity, as seen in this great hall, actually lost? This is the question visitors to the installation are invited to explore through their “inner archaeologist and ethnologist”.

The machine and its “perfect minds” both literally and figuratively sit at the highest plateau  of human evolution; but explore the build and you’ll discover that the plateau itself is made up of many layers sitting one atop another, each harkening back to earlier times and hinting at what has been lost – and what may yet rise up once more to haunt those minds so earnest in their dedication to running the machine that runs them.

Each level is there to be explored in turn, although the passages between them may not always be obvious, so take your time exploring. The way down to the lowest level and the further point in the past – what we might consider the present – isn’t particularly obvious, keep your eyes peeled for a hole in the floor of a building.

This is a thought-provoking piece. As you descend through the various levels, you’ll doubtless form your own answer to that question as to the price of human evolution when only technology is seen as holding the key. In this, Lilia and Moe are to be congratulated in only providing the most subtle of pointers to direct any thinking on the matter, leaving it up to the observer to draw their own conclusions. 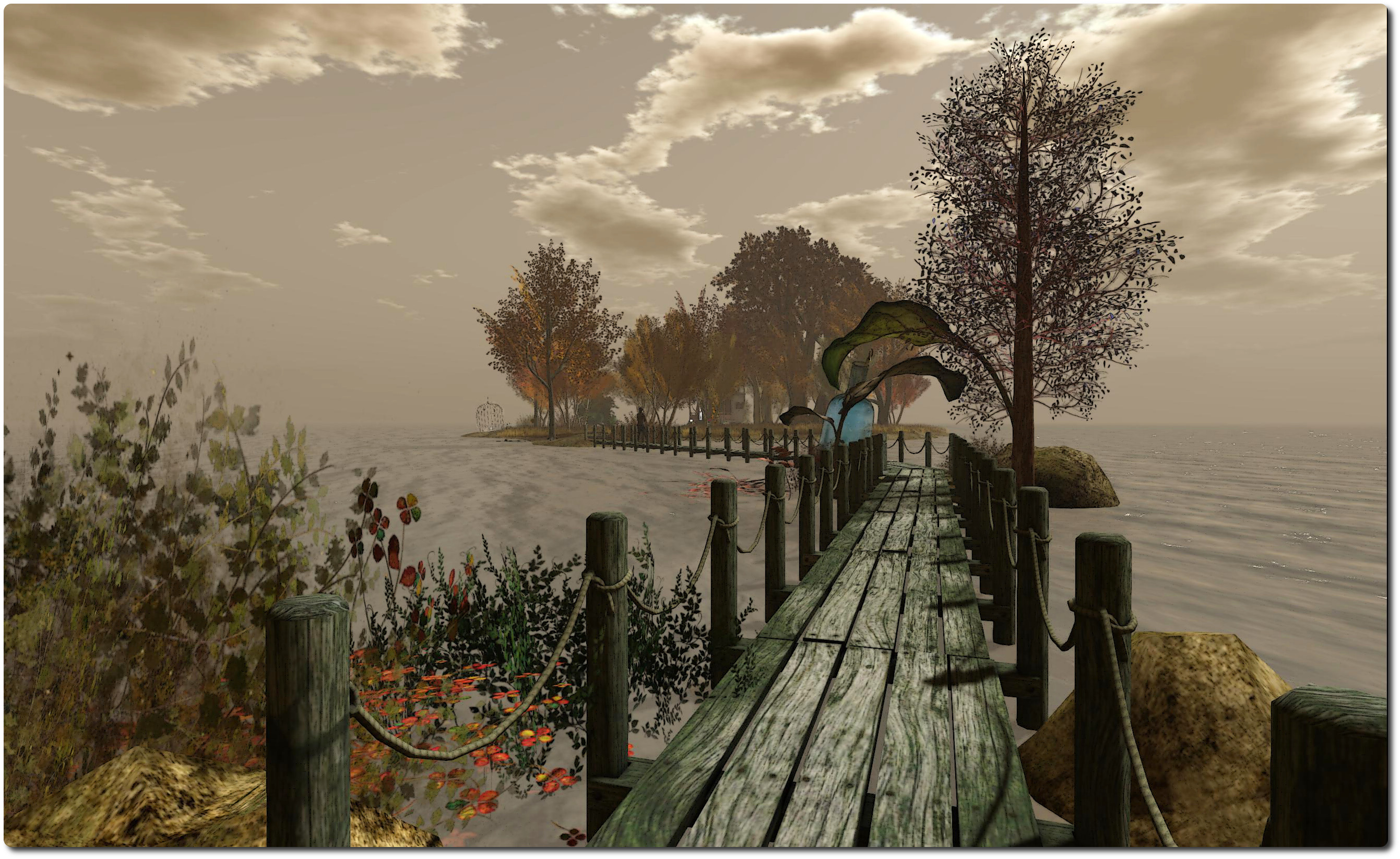 Eddie Haskill pointed me towards Asalia House when he blogged about it recently, describing it as “magical”. He’s right.

A Homestead region, Asalia House comprises three islands set in an ocean suggestive of a coral sea. Two of the islands, on the west side of the region, are resplendent in the rich autumnal colours of the northern hemisphere, while eastward, the third is a Moon-like tropical crescent of sand, palm trees and beach bars, all of which offer a strong contrast in theme and look when compared with the other two islands, and yet works with them to create a complete picture. 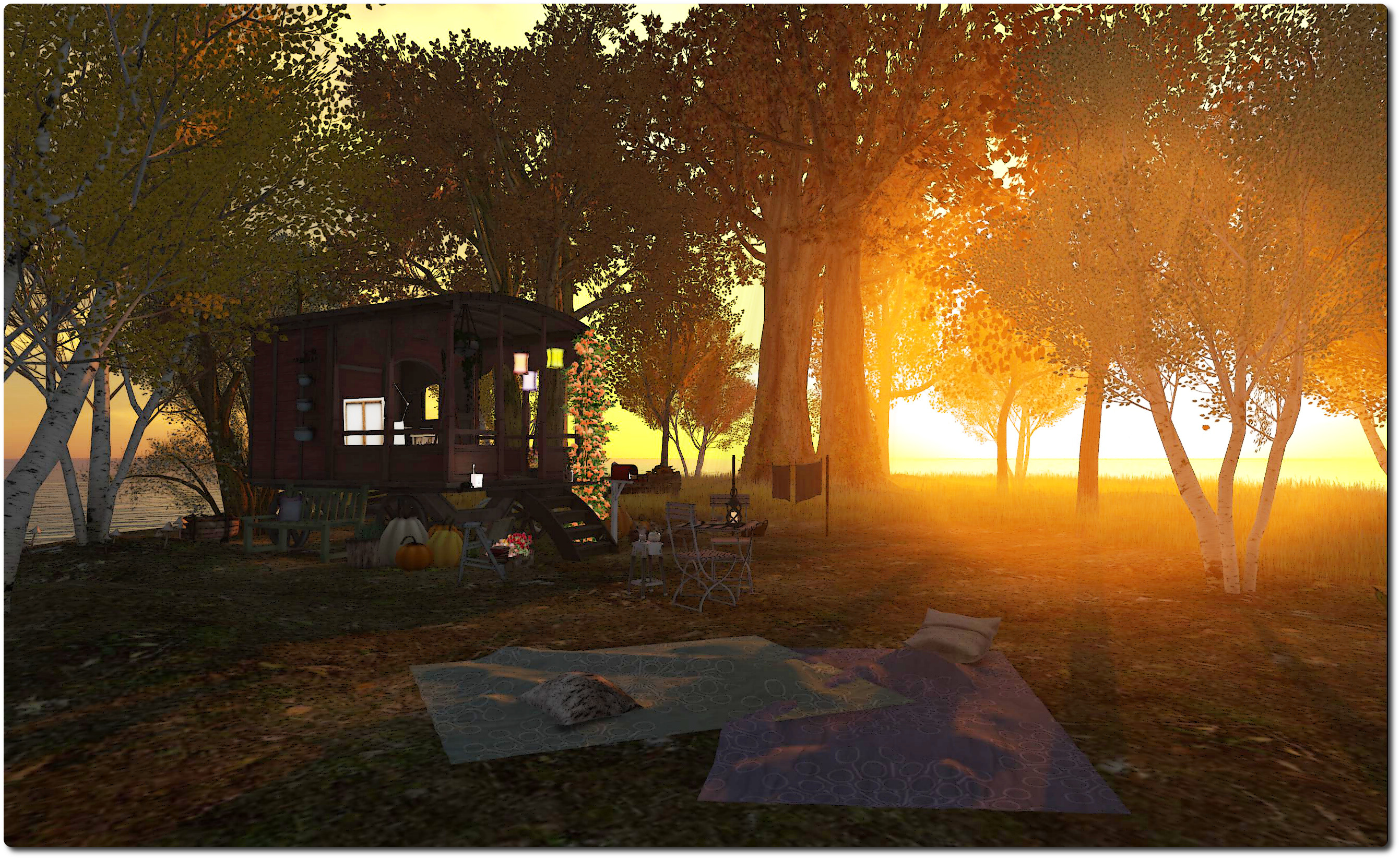 The entire region is primarily the work of Ryu Asalia, Kyo Asalia and Lonco, with Ryu and Kyo responsible for the look and feel of one of the temperate islands and Lonco the other, and all three sharing in the creation of the sandy islet.

All three islands offer a simple, natural setting which is both ripe for photography and welcoming to visitors who wish to come and sit a while. Ryu and Kyo’s island, to the north-west offers a small café flanked by the towers of a water tank and a windmill, surrounded by trees and with a small seating area outside.

Across the bridge and to the south-west, Lonco’s island offers a more rural scene, with an artist’s caravan and encampment sitting amidst silver birch and other trees in a leafy, grassy glade. 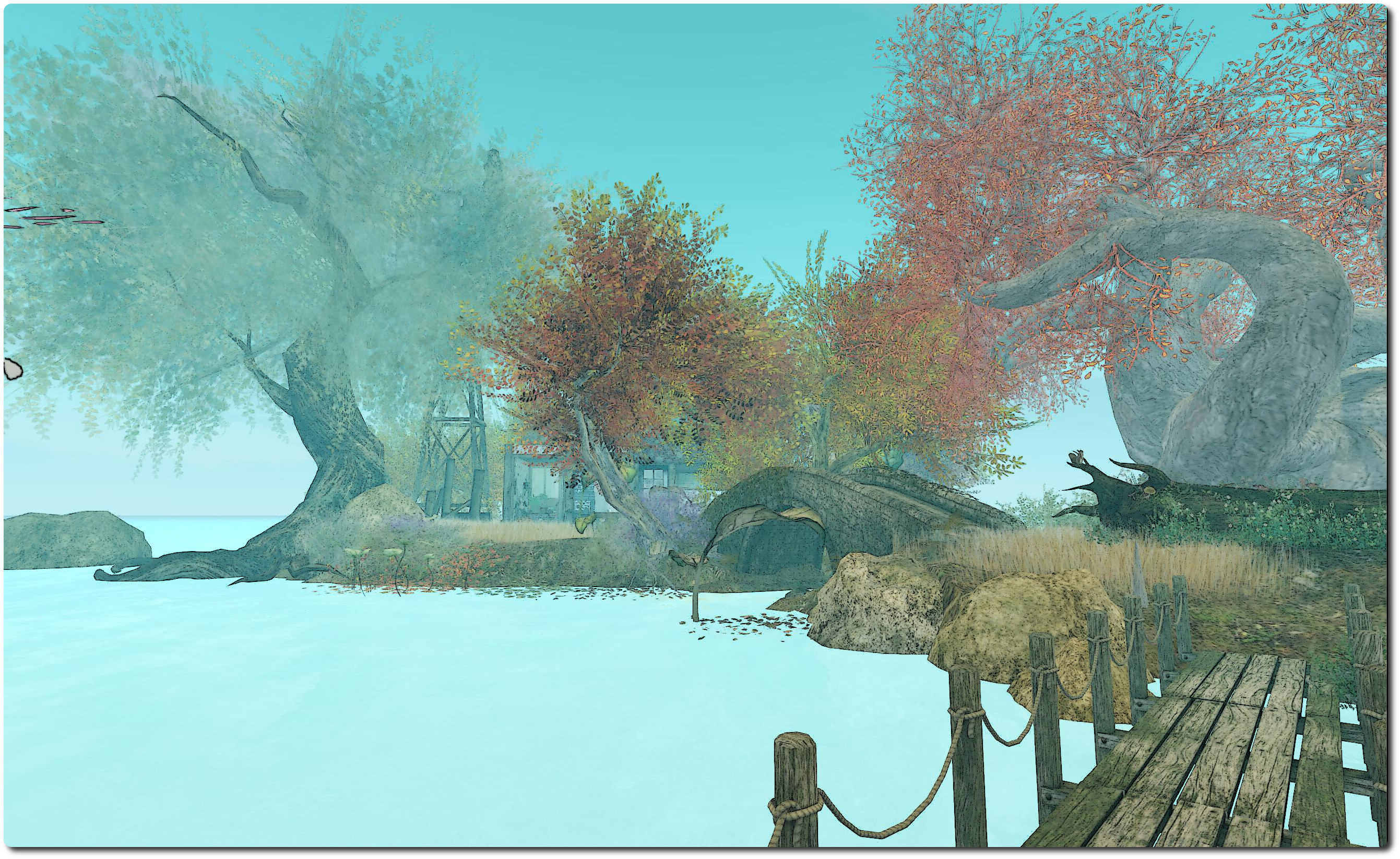 There are delightful touches of whimsy to both islands; a tall “apple picking chair” sits in the water just offshore from one, with a number of apples conveniently suspended on strings from the outstretched branches of a tree; elsewhere sits a giant birdcage precariously balanced on the bank of a small inlet of water over which large soap bubbles float, while between the two islands and alongside the wooden bridge sits a large bottle, inviting passers-by to jump into it, genie-style.

There’s also some lovely attention to detail to be found as well, so it’s worth taking your time when looking around both of the islands, whether you’re exploring or camming for a look-see.

Across the water, the tropical islet is very different, as noted above. Here sits a rough-and-ready beachcomber’s bar and a more upmarket cocktail / coffee bar. Surfboards nuzzle the sand, offering places to sit, and a large tiki-style hammock is suspended between tall palm trees.  Here one can wander the sand, enjoy a drink or two, sit and chat, or dance, or float on the water and forget the rest of the world. For those who get hungry, an enticing table of snacks beckons. 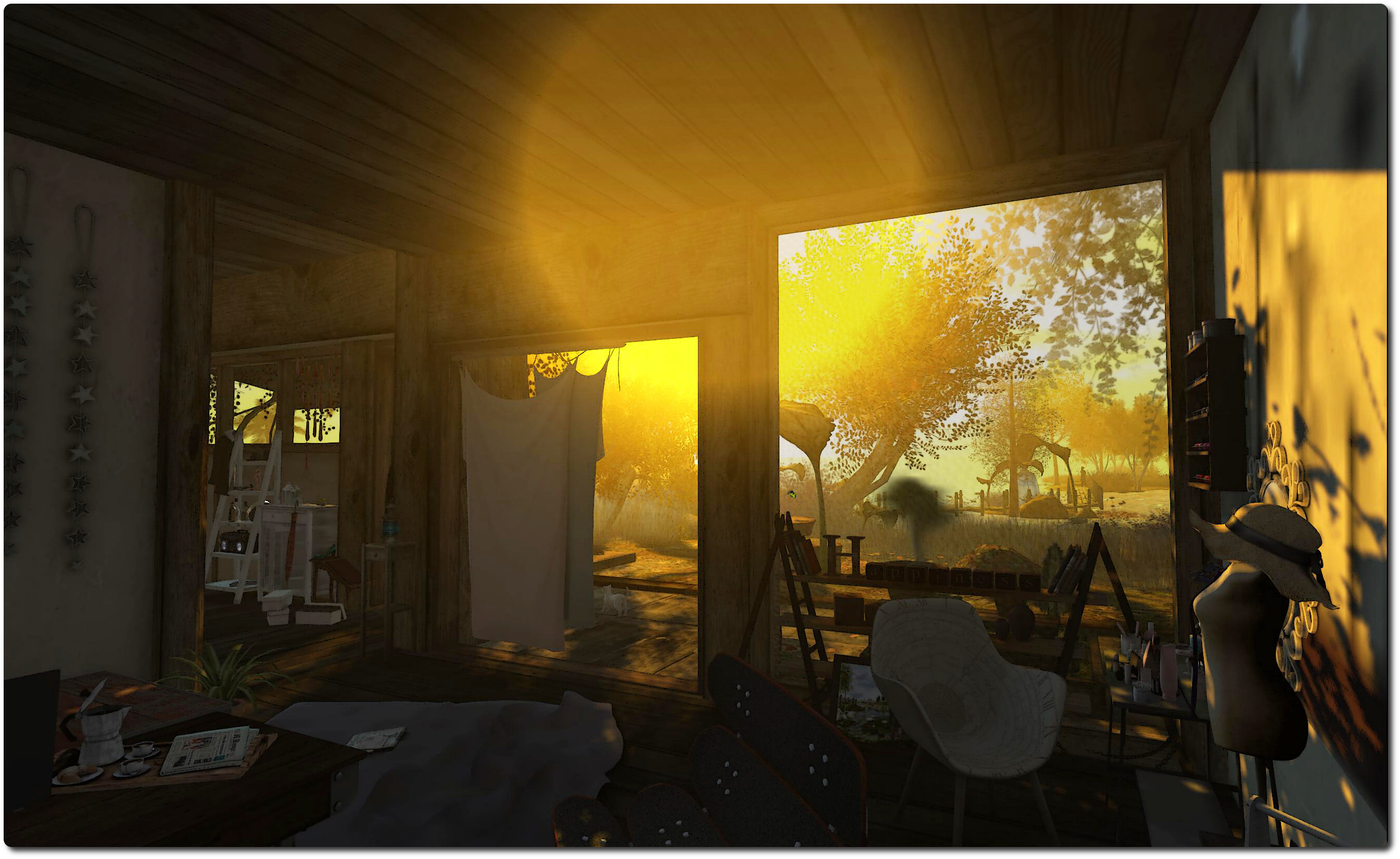 The region comes with its own windlight preset, providing the feel of a hazy morning which suits both the temperate western isles and the eastern tropical island, and which blends perfectly with the default water windlight for the region. Oh, and with regards to the latter, it’s worth taking a look down on the region from overhead (you may need to tweak your sky windlight if you’ve accepted the default) or taking a peek at the world map – you’ll see the entire region is actually heart-shaped under the water, a reflection of a general theme of love and openness which is also carried through the design.

This is a phenomenal setting for the SL photographer, beautifully suited to range of lighting options which could well keep you occupied with the camera for some time. When you’ve finished you explorations, why not pop into Ryu’s cafe and leave a comment in the guest book and perhaps a sign of your appreciation in the tip jar?

Dave Rowe (Strachan Ofarrel in SL) is responsible for developing the CtrlAltStudio viewer. Based on Firestorm, the viewer comes in two flavours, one encompassing a Stereoscopic 3D world view, and the other pioneering Oculus Rift support for both Second Life and OpenSim.

I’ve been reporting on both viewers as they’ve been updated, and noticed that Dave recently posted some useful information for those with a pre-release Oculus Rift SDK version and who might be using his viewer.

In it, he provides an overview of the headset’s configuration utility which allows users to:

If you have a headset, and have not used the configuration utility, Dave’s article makes worthwhile reading, covering as it does all three of the operations bulleted above.

In addition to covering these options, Dave points out that the latest version of the firmware (0.18) includes improvements to reduce orientation drift. So, if you have been using the utility to calibrate the headset, but are finding your orientation is drifting a lot, you may want to try updating your headset’s firmware.