Update March 26th: Erick has sent me a copy of the “full” version of the Spitfire’s Hud, which does include a comprehensive set of control switches.

As regular readers know, I was bitten by the flying bug towards the back-end of 2012. I started out humbly enough with a couple of “freebie” aircraft (although the term doesn’t do them justice at all) a Terra Stingray by Steve “Cubey Terra” Cavers and a Pitts S2C by Michie Yokosuka. As noted back then, I’d had some flying vehicles prior to these two, but they marked my “real” entry into the world of flying in SL.

Since then, my aircraft collection has expanded somewhat, with several more from the Cubey Terra range entering my ownership, and even Warbugs getting my attention. If I’m totally honest, the Stingray has remained my out-and-away favourite – it handles beautifully and is equally at home whether in the air or on (and even under!) the water – which is really handy when out on Blake Sea.

However, my collection of aircraft gained a massive boost recently when I unexpectedly came into ownership of an aeroplane I have, like anyone remotely connected to or interested in RL flying, loved from afar: A Supermarine Spitfire. Specifically a Mark IX as made by Erick Gregan.

The “Spit” came my way while Erick and I were visiting the Magnum Sandbox regions in order to poke sticks at the region crossing bug fix deployed this week by LL in an attempt to cure much of the misery surrounding vehicle region crossings resulting from the recent roll-out of interest list code.

Those who are familiar with Erick’s work know this his aircraft are all exquisitely put together and detailed – and the Spitfire is no exception. A mesh construction, It is perhaps one of the most detailed SL aircraft I’ve seen, and it is clear that he has poured an enormous amount of creative talent into it. I confess that it was love at first sight when he rezzed it in front of us.

It is also fabulously scripted – the one aircraft having four flight modes:  an “easy fly”, a “realistic fly” (handling pretty much as a “real” aeroplane would, and requiring as much care and respect), and both an “easy combat”, and a “realistic combat” version for those who feel a little more bloodthirsty.

All four variants come in a single Mark IX rezzer which itself is pretty neat. Pull it out of inventory, let it rez and then click to select which variant of the aircraft you’d like. The “flyable” version then replaces the rezzing version, which self-deletes, leaving the flyable version occupying the same space.  Also included in the box is a low-impact (non-flying) “display” version, suitable for parking in a hanger, a full set of instructions and a parachute – just in case.

The Spitfire uses the usual flight controls: Page Up / Down for throttle, the arrow keys for climb / descend / banking, together with a huge range of chat commands  – there is no active HUD for flight settings, although you can display an instrument HUD on your screen.

In terms of capabilities and control, Erick has packed a lot in, and sought to make the aircraft as real to fly as possible, particularly in the “realistic” modes. In the latter, a correct start-up process needs to be followed in order to get the big Merlin engine turning over; there’s a battery to turn on, fuel pumps and mixture to set, throttle to open, etc., before attempting start-up. When the engine does start to turn over, you’re treated to unburnt fuel “flaming” in the Merlin’s exhaust pipes as well as getting the life-life sound of the engine coughing and roaring into life. All-in-all an aviation enthusiast’s dream.

Once in the air, the Spitfire is a delight to fly, and is very responsive to keyboard inputs, with flap, ailerons and rudder all visibly moving in response to inputs. I can say that aerobatics, are a joy – providing you have a good sense of spatial awareness :). I had a lot of fun barrel-rolling and looping around the sky once I’d got settled.

Care does need to be taken when flying the plane in “realistic” modes, however. Get things out of shape on landing, for example, and you’re liable to tip the nose into the ground … as I found out *cough*cough*. Oh, and don’t forget to refuel between flights :).

There is a HUD to go with the Spitfire, but it is “passive” in the sense that while it records airspeed, altitude, heading, etc., there are no switches or options to click; all commands outside of the flying controls are given via chat. The commands themselves are simple enough, with many abbreviated for ease of use (“cc” to close / open the canopy, “ch” to remove / place the wheel chocks, “br” for brakes, etc).

I’ve not actually tried my hand in combat, as that is not something which particularly draws me (Warbugs notwithstanding!), bot the Spitfire comes with an impressive array of weapon options using the VCE combat system for those who are combat enthusiasts.

As to region crossings? While, these have been an issue of late, as I’ve been covering in my weekly SL project updates. However, and while it has, at the time of writing, yet to be deployed to the entire grid – which should happen in week 13 (commencing Monday 25th March), the fix for BUG-1814 works. Neither Erick nor I encountered any issues crossing between regions in the Magnum Sandbox area. Hopefully this will be the majority finding for everyone who enjoys flying / driving / sailing in SL once the fix has been fully rolled-out.

And the Spitfire? Well, suffice it to say, I’m well and truly flying high. 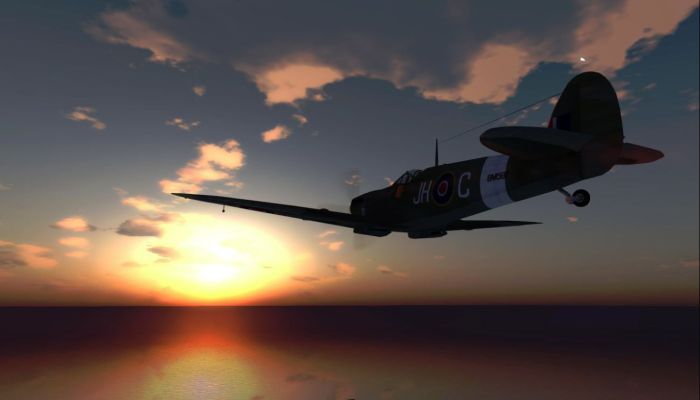 18 thoughts on “Flying high in SL”