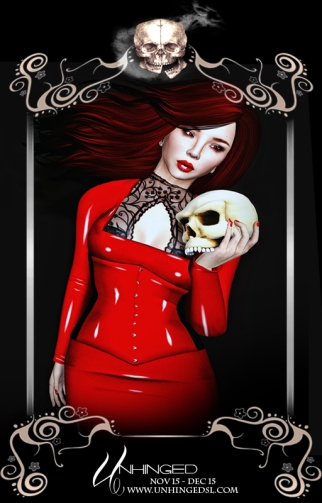 Over the last several years, Eku has suffered with MS and then thyroid cancer prior to being stricken with bone cancer. Throughout this she has undergone extensive treatment from radiation therapy through to both bone marrow transplants and bone replacements, all of which have taken their toll, and left Eku with a fragile skull. The area where her zygotic arch meets the temporal bone is severely compromised, leaving her with a risk that her zygotic arch could lift off the temporal arch and push the temporal bone into her brain. Actions as simple as chewing hard food or yawning the wrong way could cause this.

To prevent this, Eku needed to have a further surgery to fit her with a prosthesis to replace the damaged bone. Unhinged was put together by Eku’s friends, lead by Nephilaine Protagonist, in order to help her meet the cost of the surgery and the prosthesis.

Over the course of the last month, Unhinged has been taking place on two regions, with a large, open-area vendor area on Port Seraphine, with content creators who are supporting the event displaying their wares – some of which have been exclusively for Unhinged. The vendor area is simple, low-lag and highly effective for an event of this sort. It leads up to the party / stage area, which is just “over the border” in the region of WaterWorks and is very much in keeping with the overall theme for the event, as it features a large skull in which DJs are artists perform.

During the course of the month, which has seen donations both in-world and via an Indiegogo fundraiser page, enough had been raised which could be added to the money Eku herself has put together for her to undergo the surgery. As a result, Eku is once more at home, recovering. She is also hoping to attend the remaining Unhinged events through the day as and when she can.

As a result, a series of special events are being put together – and while the schedule is somewhat fluid, everyone is invited to join in and welcome Eku home.

The events, as currently scheduled are:

All events at the stage area.

With thanks to Ciaran Laval