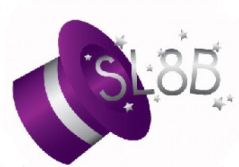 IP rights, DMCA, copyright, trademarks, content theft – they are all the subject of heated debate within and around Second Life.

Linden Lab themselves have been known to react very heavy-handedly regarding what they view as their own intellectual rights including laying claim to the word “Life” in all matters relating to Second Life, thus forcing Marine Kelley to rename the “Restrained Life Viewer” to “Restrained Love Viewer” – something of a petty stance in the circumstances – while also roundly slapping those it purports to support in the education sector.

And now Linden Lab seem to be wading deeper into the water – by snagging Miso Susanowa’s work, and the credit thereto. As Miso explains, she was approached regarding the creation of a logo for SL8B – and the outcome appears to have been somewhat less than positive.

It’s going to be interesting to see how this works out; right now the story is not winning Linden Lab much in the way of support – or doing SL8B any favours. Indeed, in reading it, one is reminded of the old adage about politicians: if one isn’t kissing your baby, you can be sure he’s stealing its lollypop.

18:00 BST:As suggested in my reply to Gwyn, Rod “Rodvik” Humble was straight on to the case via Twitter:

rodvik rodvik humble
Thanks for the notes all. Will look into the mystery of the magic hat! 🙂

21:30 BST: Pete Linden, posting on behalf of Amanda Linden on Miso’s blog, had this to say (also linked to above):

Hi Miso, Amanda Linden tried posting the comment below on your original post, but it wasn’t published. Here it is again:

Despite how this unfortunate situation clearly feels, it’s really just a misunderstanding and a case of two designers independently choosing a similar image to represent the theme.

The Lindens and community organizers who saw your original submission liked the idea, but it needed to not make use of the eye-in-hand SL logo. They asked that you re-submit the design without the eye-in-hand logo, but when they’d not heard back after several follow-ups, they asked a Linden designer to create a few options so that we would be sure to have a logo in time for the event.

The Linden designer presented a few concepts based on the theme of ‘the magic of SL,’ and, without having seen your concept or having been told about it, she also created a logo using a magician’s hat image to represent the ‘magic’ theme.

At this point, the Lindens picking the logo had an opportunity to notice the similarities and should have addressed this with you directly; we didn’t, and for that we apologize sincerely. While the Linden designer arrived at similar imagery independently, we will update the attribution of the logo design to reflect that your earlier submission first presented this concept. [posted by Pete Linden]

Sarah Kuehnle, aka Esbee Linden, who departed Linden Lab back in January is apparently back. The news is spreading like wildfire across blogs and Twitter (curse you, ironing, for making me miss the “breaking news”!).

Although the news isn’t exactly that new – she’s been Tweeting about it for almost a month, so most of us seem to have missed it!

Exactly what she’ll be doing is unclear, but it looks like she’ll once again be involved in Viewer development going on her comments about being in the Viewer scrum once more with Yoz and Oz; this has given rise to speculation that “Viewer 3” might be on the horizon – although that’s nine parts wishful thinking more than anything else – Rodvik himself has been more than candid about the continued development of Viewer 2.

Anyway, here’s a little welcome back!