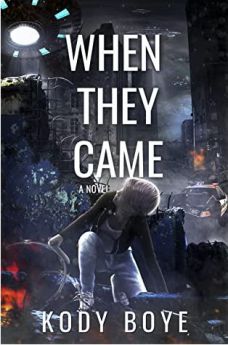 I was never afraid of monsters—at least, not until They came: the visitors from outer space.

Now They’re in our skies, on our streets, always watching, forever waiting.

At seventeen, I’m just about to graduate from the Juvenile Education System and declare my career of choice. The Midnight Guard—who protect our community from the vicious things that lie outside our walls—calls to me.

It’s hard, dangerous work, with gruelling hours that offer little sleep, but it’s the one thing I know will help make a difference in our ever-changing world.

– Ana Mia, When They Came

Having graduated from the juvenile education system, Ana Mia decides to join her sister as a part of Fort Hope’s Midnight Guard. Fort Hope is a stronghold, protecting its inhabitants from Earth’s alien invaders; and the Midnight Guard forms the eyes, ears and guardians of the stronghold’s Wall.

Without the Guard and without the Wall of the stronghold, the aliens would be free to harvest humanity, using their ships and the Coyotes who form their eyes and ears in opposition to the Midnight Guard.

Gyro Muggins read’s the first volume in Kody Boye’s When They… saga. Volumes two and three to follow.

Klawde had everything. Sharp claws. Fine fur. And, being the High Commander of the planet Lyttyrboks (think about it if you need to!), an entire world of warlike cats at his command. But then he is stripped of his feline throne and sentenced to the worst possible punishment: exile to a small green-blue planet that is, as they say, “far out in the uncharted backwaters of the unfashionable end of the western spiral arm of the galaxy”, known to its dominant bipedal race as “Earth”.

On that planet, Raj is a young man who had everything: a cool apartment in Brooklyn New York, his three best friends living in the same apartment block and comics and pizza always within easy reach. Then, courtesy of his mother taking a job on the other side of the country, he finds himself exiled to the community of Elba, Oregon.

These two lost souls, one seeking friendship (and, hopefully, pizza and comics) but forced to join a nature camp, the other a cunning, brilliant feline emperor, both exiled and seemingly lost, are destined to meet. And when they do – whether Klawde likes it or not – the emperor cat will find his plans for revenge on those who would oust him from his empire running somewhat secondary to becoming Raj’s new Best Friend as the two of them become bound by a series of new and hilarious adventures.

Neal Stephenson  is often credited with foreseeing “the Metaverse”, the immersive, 3D interactive successor to the Internet, as given form in his 1992 novel, Snow Crash. However, what may not be widely known is that he was also one of the first science fiction authors to attempt to plumb the potential depths of crypto-currency.

This is did through a number of his novels and short stories, and in the case of the latter, one of his more well-known “shorts” on the subject is The Simoleon Caper. First published in 1995 by Time magazine, the story is set within the same universe as Snow Crash, but at a period that precedes the events of that novel and within a United States that, whilst similar to that presented in the novel, is also in a slightly earlier form, as is the Metaverse.

The central story involves one individual’s apparently innocent work to help promote a non-governmental electronic “currency” called the Simoleon. His work attracts the attention of a  group of “crypto-anarchists” who operate an entirely virtual nation, the First Distributed Republic (FDR – get the play on the initials?) and believe the government is going to use the individual’s work for their own subversive aims.

Featuring ideas of misinformation, subversion (including the ability for e-currency to circumvents government taxation), The Great Simoleon Caper perhaps has more relevance in today’s world as it balances on the edge crypto-financial, metaversally-hyped digital abyss, both in the story it tells. It also  – as with much of Stephenson’s work – lends itself naturally to the “traffic jam test” of critical reflection. 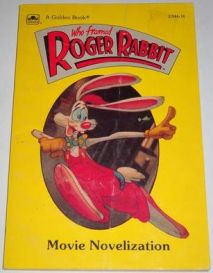 Here’s a bit of fun for you: A novel based on a screenplay based on a novel.

That story was then used as the basis for the Disney / Amblin Entertainment film Who Framed Roger Rabbit, leased in 1988. Shifting the core of the story from the 1980s to the 1940s and exchanging cartoon strip characters (complete with speech bubbles over their heads) for animated characters, the film was an instant success and remains a much-loved madcap adventure involving Eddie Valiant and the halpless Roger.

Who Framed Roger Rabbit: The Novelisation by Justine Korman Fontes takes the screenplay for the movie and presents it in a novel format for further enjoyment. And, to complete the circle, both it and the film prompted Wolf to write  Who P-P-P-Plugged Roger Rabbit? in 1991; an attempt to recon his original story into that of the film whilst also acting as a continuation of characters and stories found within the film.