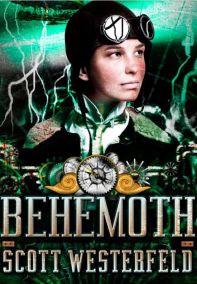 When the Leviathan, a living whale flying ship, arrives in Constantinople, a city where Clanker culture and Darwinst principles intersect in the most intriguing ways, Dr Barlow and Deryn Sharp deliver their precious cargo to the Sultan as part of a peace-keeping mission, only for things to suddenly take a left turn. Now the only way to save themselves in this hostile, politically-charged city is for Dr Barlow to offer up the thing that matters most: Leviathan itself.

Meanwhile, Prince Aleksandar Ferdinand, the would-be heir to the Austro-Hungarian throne following the murder of his father, escapes from his prison camp and once more goes on the run with his men and the loris while Count Volger stays behind to fend-off the pursuit, forcing Alek to take on new responsibilities.

Thus, fate once again sees to it that both Deryn and Aleks must re-evaluate their precarious situations in the world…

Join Gyro Muggins as he returns to Scott Westerfield’s alternate history of Earth.

It is the summer of 2013 and Abigail Kamara has been left to her own devices. This might, by those who know her, be considered a mistake.

While her cousin, police constable and apprentice wizard Peter Grant, is off in the sticks chasing unicorns Abigail is chasing her own mystery: teenagers around Hampstead Heath have been going missing but before the police can get fully engaged the teens return home – unharmed but vague about where they’ve been.

Aided only by her new friend Simon, her knowledge that magic is real and a posse of talking foxes that think they’re spies, Abigail must venture into the wilds of Hampstead to discover who is luring the teenagers and more importantly – why?

A native Floridian, Carl Hiaasen is an American journalist who focuses on political issues (notably corruption, environmental issues and other wrong-doings) within his home state. Starting his career in the 1970s , he became renowned for being exceptionally outspoken – even against his own employers.

During the 1980s, he started writing fiction in his spare time, achieving initial success with three co-authored novels published between 1981 and 1984, as well as writing several non-fiction titles.

In 1987, his second novel, Double Whammy introduced the “trailer park star tenant” and private eye, C.J. Decker, which Hiaasen fondly refers to as “the first (and possibly only) novel ever written about sex, murder and corruption on the professional bass-fishing tour.” Among the cast of characters mixed into Double Whammy is one Clinton Tyree, the one-time governor of Florida, who abandoned his office and now lives as a outdoorsman (and partaker of roadkill cuisine) in the Everglades and the Florida Keys, using the pseudonym Skink.

Skink went on to become a recurring character in a further seven of Hiaasen’s novels to date, with all the books in which he features being gathered together under the general title of SKINK, with several of them being been among the 20+ works of fiction and non-fiction by Hiaasen to appear on the New York Times best-seller list.

Join Kayden Oconnell as he continues a journey with Hiaasen’s characters.

Join Caledonia Skytower as she presents the 37th novel in the Discworld series, and possibly one of its greatest satirical undetakings encompassing football, academia, traditions, the fashion industry, politics, love, fandom, and which mixes in more serious themes of identity, crab mentality and self-worth.