To celebrate both, Seanchai Library will be a part of the Innfest celebration that marks both anniversaries through until August 27th (read more here), with Caledonia Skytower, Corwyn Allen, Kayden Oconnell, and Finn Zeddmore sharingstories from the Lovecraftian canon over 90 minutes. Included in the series will be:

So why not join them at the Miskatonic University Library at Arkham? 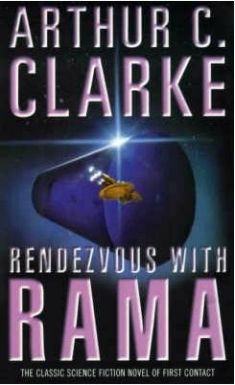 In 2131, a fast-moving object of extremely large size is detected beyond the orbit of Jupiter travelling on a course that will see it pass through the inner solar system to swing around the Sun, before heading out into space. An automated probe launched from Mars reveals the object to be a perfect cylinder, 50 km long and 20in diameter rotating regularly along its long axis and clearly artificial in nature.

The deep space survey vessel Endeavour, her crew untrained for first contact scenarios, is the only vessel that can intercept the cylinder as it uses the Sun’s gravity well to accelerate and bend its path onto a new trajectory. After a high-speed chase, the Endeavour reaches the cylinder – christened Rama by those who first identified it – and finds one of the end caps has curious triple chamber airlock systems within it. Through one of them, the crew gains access to the object.

What they find within stuns them: the cylinder is hollow, a 50x16km “tube” the inner surface of which forms a circular world of three parts: a large plain, with six city-like groups of structures scattered around it, a central band of frozen water the crew call the Cylindrical Sea with a single long, thin island (which they dub “New York” due to its superficial similarity to Manhattan island). Beyond the sea lies a landscape of split into cubes and squares, dominated by a group of massive cones extending inward along the cylinder’s long axis from southern end cap.

Initially in darkness and frigid when the Endeavour’s crew enter, the cylinder gradually comes to life, revealing its strange alien nature, where everything appears to be done in triplicate (or multiples thereof). And then, as tensions among the human civilisations across the solar system rise, the “Ramans” appear.

So, you think you know the story because of the film? Well, guess again! Disney’s famous 1968 film can best be described as being loosely based on the children’s story by Ian Flemming, the creator of James Bond.

Flemming’s last novel, Chitty Chitty Bang Bang was published posthumously, and initially in three volumes, two months after his death in August 1964. He took his inspiration for the titular car from a series of post-War World I aero-engined racing cars called “Chitty Bang Bang”. They were built by Count Louis Zborowski at Higham Park, in Kent, England, and one of them, the “Higham Special” went on to take the land speed record in 1926 with a speed in excess of 170 mph, after it had been purchased by racing driver J.G. Parry-Thomas specifically for that purpose.

In the book, the car is a Paragon Panther, a powerful 1920s touring car that is restored by Commander Caractacus Pott. At first the car is just that – a powerful 4-seater tourer Pott uses to transport himself and his wife and children around. But then the car starts to exhibit a “personality” and abilities beyond those of any normal motor vehicle. Some of these will be familiar to those who have seen the film, but where the latter options to introduce jealous barons and a wicked Child Catcher, the book offers a more down-to-Earth but equally engaging series of adventures of Commander Pott and his family.

An earthly nourris sits and sings
And aye she sings, “Ba lilly wean,
Little ken I my bairn’s father,
Far less the land that he staps in.

So begins a stunning tale of love, loss and revenge, against a powerful backdrop of adventure on the high seas, and drama on the land. The Blue Salt Road balances passion and loss, love and violence and draws on nature and folklore to weave a stunning modern mythology around a nameless, wild young man.

Passion drew him to a new world, and trickery has kept him there – without his memories, separated from his own people. But as he finds his way in this dangerous new way of life, so he learns that his notions of home, and your people, might not be as fixed as he believed.