On Friday, June 28th, 2019 at the SL16B celebrations, the last of five Meet the Lindens sessions took place at the SL16B Auditorium. This was a special session, featuring as it did members of the Linden Department of Public Works – aka, the Moles.

The nature of the event, with so many people available to answer questions makes producing a summary a little difficult; instead, I offer an outline of what the Moles are, and the feedback of the key speakers on how they became Moles, and notes based both on comments during the session and the LDPW wiki page on how to become a Mole. For the rest, I recommend watching the video in full!

Who or What the Moles?

As surprising as it may seem, lot of SL users are not aware of what or who the Moles are.

Officially called the Linden Department of Public Works (LDPW) the Moles are SL residents from all over the world who have either applied to the Lab, or have been asked by the Lab, to work as paid freelance contractors. The LDPW is specifically geared towards enhancing the Mainland, as noted in the official wiki page, but they actually do a lot more than this.

The Linden Department of Public Works (LDPW) is a programme focused on improvements related to the experience of living on, or visiting the Linden Mainland. The LDPW will organize teams of Resident builders, artists, and scripters (the Moles!) to create new content on Linden Lab’s behalf and to the benefit of all.

The LDPW initially formed in 2008, and so is now in its eleventh year, and many of those involved in the programme today were recruited back then. The team is managed be Derrick Linden, the Product Operations Manager for Second Life, who reports into Patch Linden, and the team includes a number of Linden staff as well, including Guy Linden, Madori Linden, Kona Linden and Izzy Linden.

Within the Mainland, the Moles are probably best known for their infrastructure work – the roads, the railway lines, general continent layout, and all the many elements thereto. There have also been responsible for the development on Mainland projects such as the infrastructure within Nautilus City and, perhaps more particularly, the development of Bay City – which in their honour hosts an annual Mole Day festival.

Most recently, the Moles have been responsible for – and perhaps most visible with – the new Linden Homes continent, Bellisseria. They also produce the infrastructure for Lab-led events, including SL16B, the Lab-run shopping events, the town hall meeting spaces. But they also do far more than this, and work in many different areas, for example – and as a short list:

As residents, how much time Moles spend on their resident  / personal accounts understandably varies in accordance with the work they’re engaged in. Some of the longer-serving Moles perhaps tend to focus predominantly on their Moles accounts / personas, while those who have more recently joined the team might spend more time split between their personal accounts and Mole accounts.

As freelance contractors, Moles also get to pretty much choose their hours of work – providing tasks are completed on time. An advantage here is that as the Moles are based around the world, some projects can at times move forward on something of a round-the-clock basis.

Over the years, the Moles have to deal with a with a lot, starting with selecting their Mole name. For this, they have to put forward three preferences, and either are award the one that’s available, or get to pick from those that are available – although there can be opportunities for them to change their names. They also have to deal with the more unusual in Second Life, as Abnor Mole explained:

With the games, we’ve had a lot of people who try to find a lot of creative ways not to play the game as you’re supposed to … In the Paleoquest game [in which tasks must be completed against the clock] … at the end, where you’re supposed to take a giant swab and you have to go and find the dino DNA, and you do that with the giant cotton swab … we found that somebody was going around and they would always find the “good poop” to swab the very first time, and we were, “how are they doing this?” And we’re looking and we’re looking and we’re looking, and finally we realised there was a time stamp on the creation of the object that was a  little bit different on the “good” ones … they had gone that deeply into it to tell that that was how to do it [find the right item and complete the task]!

How Did You Become A Mole?

Abnor Mole: read about the formation of the LPDW in 2008, put in an application – back then this could be done via the Second Life website (and later the wiki), was interviewed by Michael Linden, who at that time managed the LPDW, and was accepted – so has been a Mole for 11 years. Among his many roles as a part of the team, he produces some of the videos associated with the like of the Paleoquest game.

Naughty Mole: was approached by Jack Linden (who used to manage the SL land team) as the LPDW was being formed with the aim of improving the Mainland, and he asked her if she’d like to join. One of the first projects she worked on was Barney’s Bay.

Squeaky Mole: is one of the “youngest” Moles, having joined the LDPW just over a year ago. He was “discovered” as a result of exhibiting at SLB, and the Lindens visited his region after which he received an invitation from Patch to become a Mole – and initially thought it was a joke!

Missy Mole: is also one of the “younger” moles, having joined the LDPW on June 28th, 2018. Also like Squeaky, she was approach by Patch to join the team, specifically in taking photos in support of Marketing work. She and Squeaky are two of the Moles who have done a lot of the work on SL16B.

Alotta Mole: like Missy, was approached by Patch as a result of his in-world photography, and joined the LDPW initially in support of Marketing work.

What Does It Take To Become A Mole?

Everyone on the team has their specialities, what they’re strong with … we do have Moles who specifically do scripting; we have moles who specifically so mesh content work and texturing or just texturing; we have Moles who do texturing and photography; we have Moles who do sound work, animation work. So, if you can think of each thing, or each area you can do content creation work for Second Life and in Second Life – we pretty much have to cover every single one of those areas, and in some of those areas we need more than one person.

There’s folk that specialise in terraforming, folks that do region décor work [trees, road, etc] … people who have got an eye for putting that stuff together and out there, being good with Land Impact … maybe they don’t have a lot of capability in making that stuff, but the other people in the team that make that content do that for them,  and then they’re the ones that carry through that next step.

Catch the rest of the session in the video below. 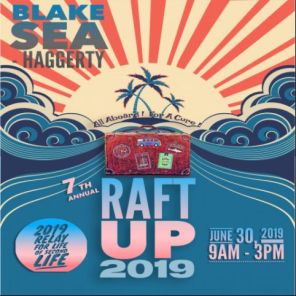 The annual Blake Sea raft-up will be taking place on Sunday, June 30th, and SL residents are invited to go along and help raise money for Relay for Life of Second Life.

Now in it is 7th year, the event will take place on a special floating stage at Blake Sea – Haggerty, beneath the iconic floating racing grandstand. It will run from 09:00 through until around 15:00 SLT, and feature a host of activities, including music, a demonstration and spectacular raffle prizes.

The full schedule of events is as follows – all times SLT.

During his set, Luke Flywalker will narrate a special rescue demonstration by the Second Life Coast Guard (SLCG).

In addition, the event will feature raffles – all proceeds to RFL of SL – with a range of stunning prizes:

This is always a popular event, and the advice is for those wishing to join the fun is, “Come early!” You can catch a video of the 2018 event via Flickr.

The following notes are taken from the TPV Developer meeting held on Friday, June 28th, 2019. A video of the meeting is embedded below, my thanks as always to North for recording and providing it. The key points of discussion are provided below with time stamps to the relevant points in the video, which will open in a separate tab when clicked.

There are assorted text chat discussions scattered throughout the video covering various topics (e.g. Firestorm code that exposed a viewer setting to show the physics shapes of mesh objects, general discussion of LL hiring, avatar dot colours on the map, and opinions on a “lite” version of the viewer (remember the Basic viewer?), the technicalities of multi-threading, etc). These are not necessarily referenced in the notes below – please refer to the video.

All of these RC viewer should now have parity with the current release viewer.

Note: at the time of writing, these viewers only appear on the Alternate viewers page; they are not listed on the the index of available viewers.

The simulator updates that will hopefully improve script run time issues (see  BUG-226851 and BUG-227099) mentioned in my Content Creation summary, are unlikely to be deployed until at least week #28 (week commencing Monday, July 8th).