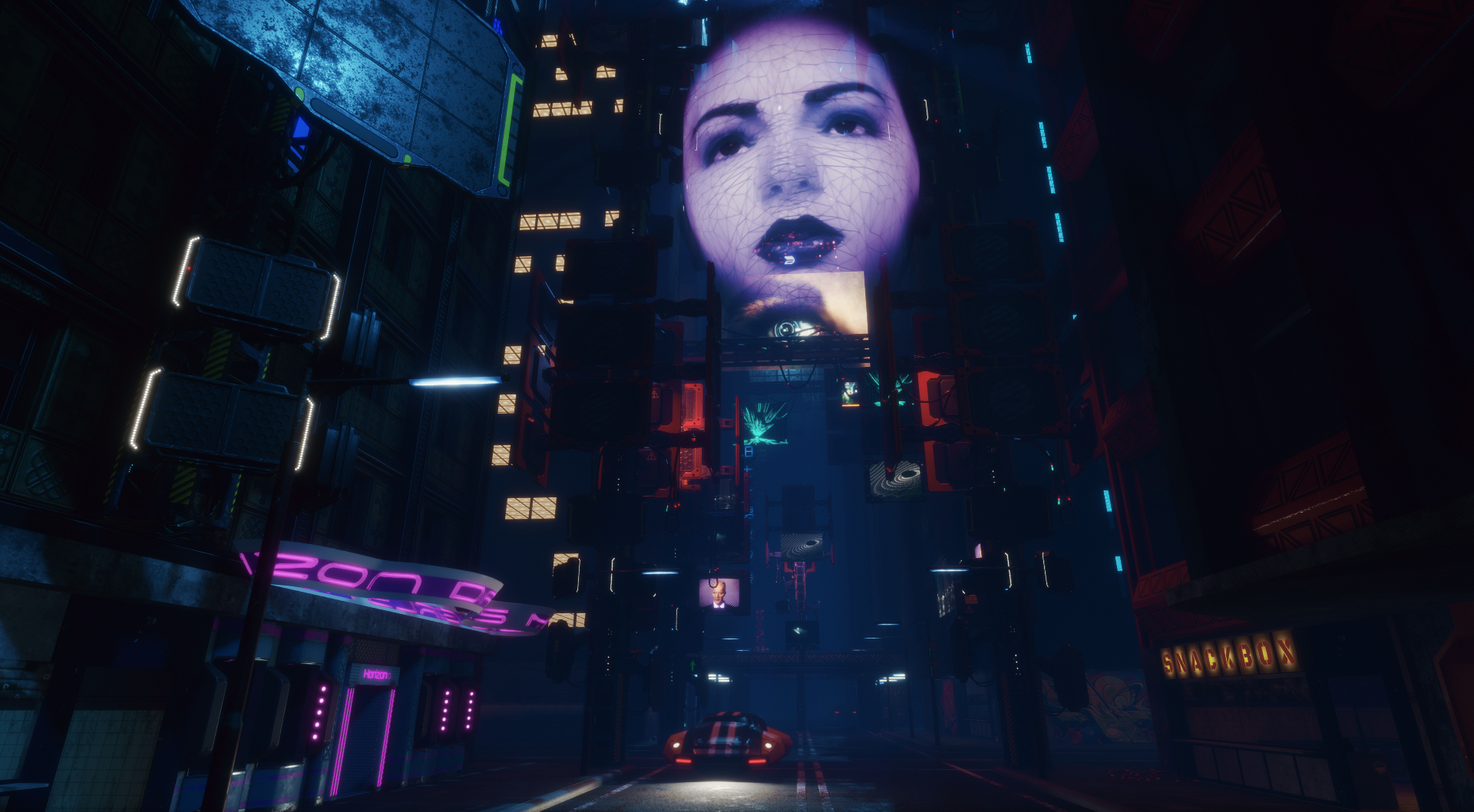 C3rb3rus is fast becoming one of the top designers of atmospheric experiences in Sansar. I’ve already written about two of his designs – Darkwood Forest (see here) and The Diner (see here – although it is deserving of a dedicated write-up). His most recent design – 2077 – has already garnered a lot of coverage, which is why I held off writing about it immediately it opened. However, it’s not hard to understand why it is has been popular -it is visually stunning.

This experience takes its basic theme from the style we perhaps most readily identify with the likes of Blade Runner – although I personally see it as something of a fusion between that and the short-lived TV series, Total Recall 2070 (itself a fusion of Philip K. Dicks We Can Remember for You Wholesale and Do Androids Dream of Electric Sheep, the inspiration for the original Blade Runner film). On arrival, visitors are placed on a long street – a canyon, if you will, formed by the flat faces of high-rise buildings, themselves surrounded by even taller skyscrapers which glitter with light.

By comparison with the latter, the streets on which visitors stand seem dark, cold, and a little threatening. With graffiti on the walls and litter on the streets, this feels is if it is a much poorer part of the city than the horizon forming towers of light and colour. Perhaps those glittering towers are where status and wealth reside; the higher up residents are within them, the more their status has literally elevated them above the darker, poorer world flowing around the feet of their great glass-sided citadels.

Perhaps this is why, flying cars zip back back and forth high above the streets, their passengers intent only on spanning the gap between lofty perches, and oblivious to what lies below, lost in the night. Nearer to the ground, more of these cars pass through the canyon-like streets, travelling a little more cautiously, while one or two have forsaken the air altogether – or have perhaps been decommissioned, like Deckard’s old Police spinner in Blade Runner, confined to crawling along the dimly lit streets.

Dim though the lighting down here might be – the street lamps little more than thin lines of blue iridescence atop tall metal poles and which case cold pools of light beneath them – the streets are still alive. Digital advertising boards shimmer, turn, dance and project, adding their own illumination which reckons off the otherwise dull surfaces of roads and sidewalks. Walking the latter, it is possible to come across gaming halls and bars, or arrive at the corner of Walk and Don’t Walk as little green and red men flick back and forth on overhead signals, determining when it might be safe to cross a particular junction.

Over all of this, a great hologram of a female face looks down, turning slowly from side to side, as if keeping a watch over the streets in her care. Not far away, a single eye darts side-to-side on a billboard, a pattern of digital lighting over the pupil for some reason putting me in mind of the Rekall chairs from Total Recall 2070. Elsewhere amidst this neon advertising one can find a hospital or clinic signified by both, a red cross and a ghostly skeleton rotating slowly above the entrance, Max Headroom close by, perhaps mocking passers-by.

C3rb2rus likes to include motion in his designs  and 2077 is no exception to this, as demonstrated by the ground and air traffic. But there is more; the spawn point in the experience, for example is under an elevated train track. Behind it (and easily missed), a ramp offers a way down to where a platform awaits. It is periodically visited by a subway train you can step aboard and ride in a loop around the build. I have no idea if this is indicative that more might be added to the build (there’s only the one stop at present), but it does offer a certain promise to the design.

Nor is this all. Find your way to the high rise at one end of the main street, and ceiling lights will direct you to where an elevator regularly descends and rises. Step into it, and it’ll offer a trip up to a modest – bordering on austere – apartment, which in turn offers a grandstand balcony view back through the experience. Watch for a few minutes, and you’ll witness another nice touch,, as an air car rises from the far end of the street, angling gently upwards until it reaches one of the lower skyways and passes overhead.

Given that so many Sansar experiences are, due to the nature of the platform at present – largely static, 2077 feels very much alive, almost vibrant beneath the hues of the backdrop skyscrapers. Atmospheric, rich in detail despite its dark tone, this is an experience offering a certain promise of what Sansar might become as a role-play environment, as capabilities are improved.