Now open at The Living Room, the delightful art and music venue operated by Owl, Daallee and Nora, is a new double-header exhibition, one I’m particularly please to see take place, featuring as it does the work of sculptress CioTToLiNa Xue, who is displaying her work alongside the equally eye-catching 2D art of Thea Maiman.

Regular readers here will know of my appreciation of CioTToLiNa’s art, which I first encountered whilst visiting an exhibition of Mistro Hifeng’s work. I was immediately struck by her emerging ability to present emotive studies; so much so, that I was determined to have her display her work at my 2015 LEA installation, Impressions – and remain pleased that she accepted my invitation to so do.

Entirely self-taught, CioTToLiNa has been learning 3D and 2D techniques over the course of the last year, between intensive university studies in veterinary medicine. Extremely shy, she believes she still has a lot to learn and is hoping to further refine her skills. This may be true – creativity as always an evolving process after all; but I think it fair to say her abilities are already self-evident, as the pieces displayed at The Living Room demonstrate. For me, it’s an absolute pleasure to see more people taking an interest in her work and offering her opportunities to exhibit – long may it continue!

I am a little ashamed to admit that prior to visiting the Living Room I was nowhere near as well acquainted with Thea Maiman’s work as I am with CioTToLiNa’s – however, my visit has certainly rectified that! Thea’s work focuses on avatar studies, with those presented in this exhibition richly textured and evocative in both style and study.

Thea says of her work that she finds her inspiration in melancholy and darkness, although light and colours can also move her as well. All of these are evident in the works on display at The Living Room, where the idea of darkness can be interpreted through the use of her subject’s eyes being obscured by dark make-up or covered by a blindfold, while  other images contrast this in the use of colour, whilst sometimes simultaneously conveying a sense of the subject being on their own, which pushes slightly at the idea of melancholy.

None of the above should be taken to mean the images are in any way depressing – far from it. There is a vibrancy and life within Thea’s work which contrasts strongly with her stated sources of inspiration, and which makes them a delight to see.

CioTToLiNa and Thea will remain at The Living Room through until Tuesday, February 23rd, depressing; when a closing party will be held, featuring the music of Lazarus Doghouse. And don’t forget the Thursday Music Party at The Living Room, which this month takes place on Thursday, February 18th, and features Agusto Napoli at 17:00 SLT, followed by The Vinnie Show! at 18:0 SLT.

Update: February 8th, 2016:  Catznip 10.1 beta is now available.  Functionally, it is exactly the same as the R10 release except is has a much updated openJPEG, If you are a Catznip user and are experiencing crash issues, this beta may help.

To find out if your issues are openJPEG related, go to  Preferences > Crash Reports. and if you see openJPEG anywhere on that page, you should updated to the R10.1 beta as soon as you can.

Saturday, January 30th saw the long-awaited release of Catznip R10, the first update to the viewer in some 18 months, largely as a result of fate playing a very unfair hand to members of the Catznip team (and it’s good to see you back in-world Kitty, and hoping your recovery swiftly moves beyond the uncomfortable stage) .

Currently, the release is for Windows only, but it see Catznip come right up to date with the current release version of the official viewer, including support for  Chromium Embedded Framework (CEF), for modern media support.

Obviously, so long a period between releases means that there have been a string of major and minor updates from the Lab, all of which have had to be incorporated into Catznip R10, and which have all be covered to one degree or another in the pages of this blog. With this in mind, and to avoid boring people with a lot of repetition of information already available, I’ve summarised the cor Lab changes found in R10 below, together with links to additional information for those who need it.

The first noticeable change is that Catznip R10 now uses the revised log-in splash screen as deployed by Linden Lab, which places the log-in options at the top of the screen. However, because Catznip is unlikely to be the first viewer new user to SL are likely to encounter, the “first time log-in” option has been disabled.

Group Bans allow group owners and those roles provided with the ability within a group, to remove troublemakers from that group / prevent them from joining / re-joining the group.

HTTP pipelining enables the viewer to issue multiple asset fetches on a connection without waiting for responses to earlier requests. This helps to improve things like initial scene loading. In addition, the pipelining code includes improvements to inventory fetching.

Avatar Hover Height, developed as a direct request of a proposal put to the Lab by members of the Firestorm team, allows “on-the-fly” adjustments to be made to your avatar’s height with the minimum of fuss and without having to use the Edit Appearance Hover slider or use a modifiable shape.

Also referred to as Experiences, this allows creators to build more seamless and immersive experiences in Second Life without the need to constantly ask users to grant permission to act on their avatar. Instead, permission is requested once when they join (or re-visit) the experience, and then revoked when they leave.

The Viewer-Managed Marketplace, or VMM, enables merchants to manage the creation and management of Marketplace product listing through the viewer, bypassing the need to use the Merchant Outbox (and have copies of items stored on the Marketplace inventory servers) or using Magic Boxes.

In addition, there has been all the maintenance, snowstorm and other releases which have all board improvements and changes to the viewer, and all of which have been incorporated into Catznip R10. These include, but are not limited to: viewer build library updates, interest list improvements, inventory handling updates, GPU benchmarking, attachment fixes, the ability for an avatar to wear up to 60 wearable layers – jackets, shirts, tattoo, alpha, etc. – in any combination, rather than being restricted to a maximum of 5 per specific layer type, and so on.

A further update made to the official viewer during 2015 was that of the Notifications floater, which appeared in the latter part of 2015.

For those unfamiliar with it, the Notifications floater allows incoming notifications (group, system, invitations and transactions, to be sorted and displayed for easier viewing. The default floater splits all such notifications using a tab system, with a tab for each category.

In implementing the feature, however, Catznip have made a couple of improvements.

This has allowed the Catznip team to include their second improvement, in the form of a search filter. This allows users to filter notifications based on criteria such as originating group, sender’s name, etc. If, like me, you are someone who receives a lot of group notices, this significantly eases sorting through and finding those to which you might want to pay particular attention.

END_OF_DOCUMENT_TOKEN_TO_BE_REPLACED

Monday, February 1st marks the official re-opening of Calas Galadhon Park after the New Year’s break the park’s owners, Ty Tenk and Truck Meredith, traditionally take following what is a hectic three months for them between October and December each year. Although truth be told,  “break” is perhaps not the right word, because while the parkland may well be closed, Ty and Truck, together with Rmoie and Kerena, are rarely putting their feet up – they’re generally hard at work making changes and tweaks, and generally preparing for the new season.

For those unfamiliar with Calas Galadhon, it is one of the largest, longest-running privately held parks in Second Life, open to everyone to enjoy and offering a marvellous range of attractions and events throughout the year. The park is completely non-residential, and supported entirely by donations and out of Ty and Truck’s own pockets. And it is, in a word, beautiful.- and you can find out more through the park’s website.

Running an endeavour as big as Calas isn’t easy, and over the years there have been changes; some have been brought about by the economic climate, others for personal reasons.

The latter has played a part in Calas Galadhon’s new look for 2016, as Ty recently explained in a blog post. In sort, two of the southern regions of the park, Eryn Vorn and South Farthing have been “retired”, reducing the park to 10 regions. Glanduin had also been selected for retirement, but in the end, neither Ty nor Truck could bear to see it go, and so its pastoral setting has remained.

This loss of Eryn Vorn and South Farthing means the southern coastline of Calas Galadhon has changed, and I confess I’ll miss winter walks through the deep snows of both, looking out over the narrow channel of water to the tall mountains of the region surrounds. but, in contrast, the broad bay which now replaces the two regions offers its own beauty and opportunities for photographs.

Other changes in the park, I understand, include some changes to Dimrill Dale, new landscaping for the Main St garden next to the Victorian Pavilion, a new Gallery Wine Bar and an updated balloon tour system. And of course, the favourites remain: horse riding, boating, kayaking, hiking, climbing, and discovering all the secrets of Calas Galadhon, spread right across the parklands. 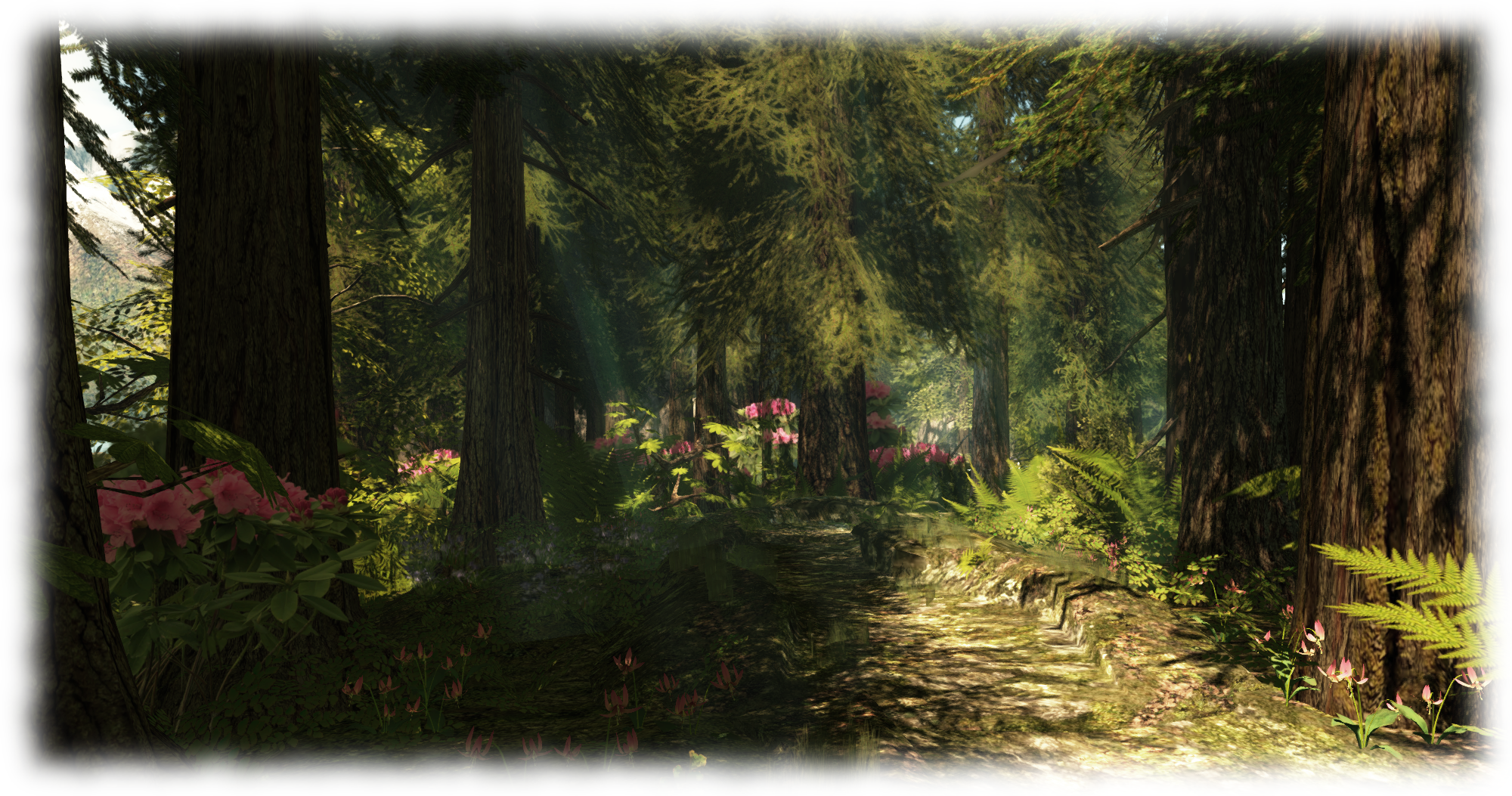 I’ve always loved Calas Galadhon. Ty, Truck Romie and Kerena between them produce a marvellous environment we can all enjoy. What makes it especially enjoyable for me this year is that I’ll be able to share the pleasure in discovering Calas for the first time all over again, as it is somewhere Caitlyn has yet to see in all its glory.

So, once again, thank you, Ty and Truck for your generosity in giving us so much to enjoy.