Following the success of the first Linden Endowment for the Arts (LEA) Office Hours, which took place on Friday 25th July, 2014, Honour McMillan, writing in the LEA blog, has announced that the event is now to be a weekly affair.

The meetings will retain the 10:30-11:30 SLT time slot (that’s AM, as I use the 24-hour notation), and will take place at the LEA Gateway every Friday, commencing on Friday August 1st. Meetings are open to anyone interested in art in SL and the work of the LEA, and committee members will be on-hand to answer questions on LEA grants, procedures, future plans, use of the LEA sandbox and anything else of relevance to the LEA and its work. So if you are curious the work / purpose / structure of the LEA, why not pop along to a meeting? conversation is warmly encouraged!

About to celebrate its 8th year in Second Life, Jamm for Genes is set to take place over the weekend of the Friday August 1st through Sunday August 3rd inclusive.

Jamm For Genes is a part of the Jeans for Genes annual event organised by the Children’s Medical Research Institute (CMRI) of Australia, in which people are encouraged to wear jeans on August the 1st each year and help raise money for research into birth defects and diseases such as cancer, epilepsy, and a range of genetic disorders. Al funds raised goes directly to research undertaken by the CMRI to discover treatments and cures, to give every child the opportunity to live a long and healthy life.

Jamm For Genes will see a weekend of music and entertainment taking place at The Pocket in Second Life, commencing at midnight SLT on Friday August 1st, and continuing on through until the final set commencing ay 09:00 on Sunday August 3rd.

Subject to last-minutes hitches or problems, the event schedule is as follows (all times SLT):

Since its inaugural event in 2007, Jamm for Genes in SL has raised $10,000 for the CMRI, and it is hoped that 2014 will see the event raise around L$500,000, which equates to about AU $2,000. The event is also officially sanctioned to raise money for the CMRI through Jeans for Genes.

All those attending are invited to grab their free Jamm for Genes gear from the Marketplace. 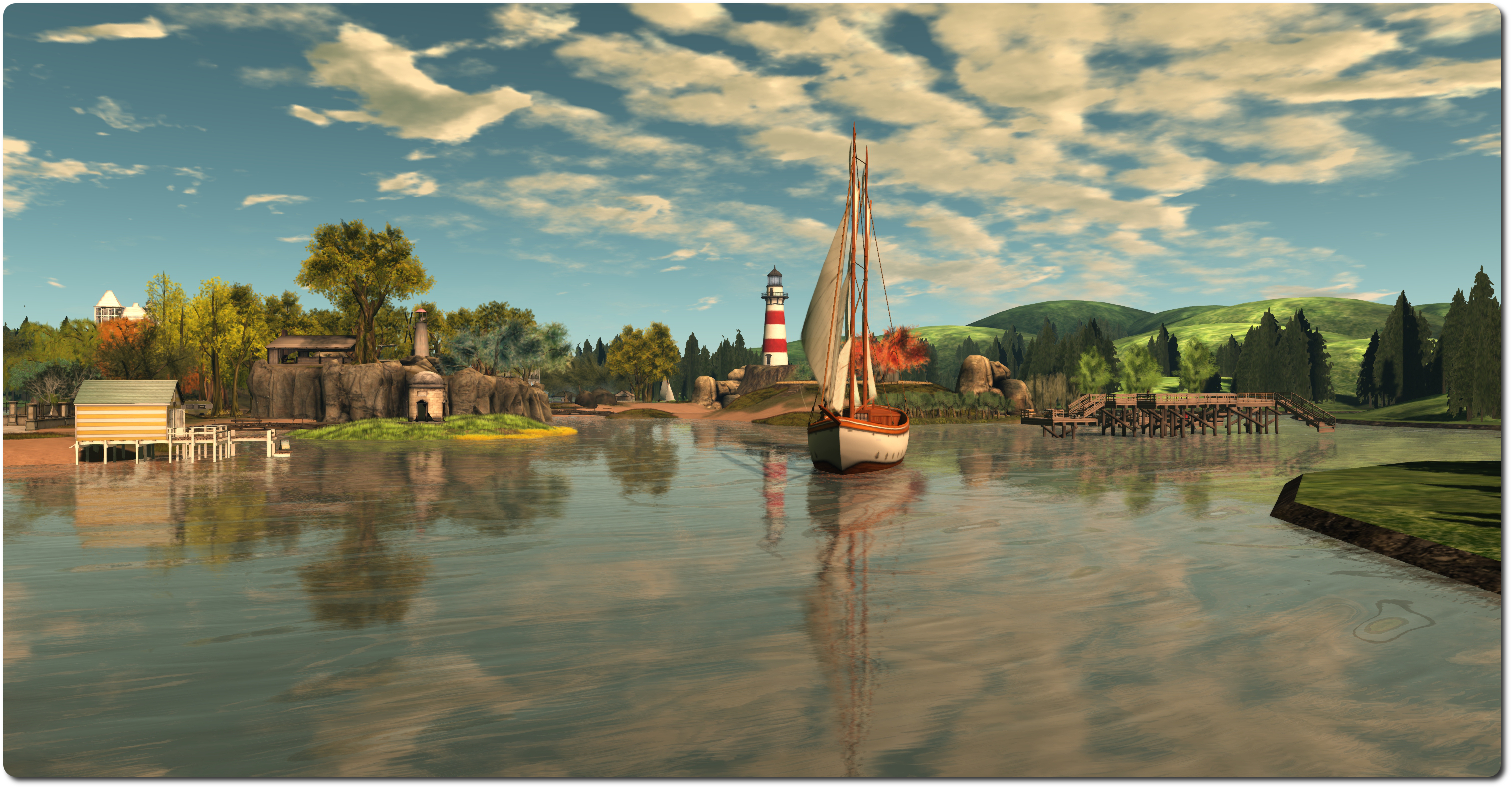 I’ve been an admirer of Asa Vordun’s work ever since I happened across her Caprice and Easy A, which I first wrote about in November 2013. As Caprice Village, I returned there in April 2014, again dawn by Asa’s creative eye. So when I saw some beautiful pictures taken by Hans Inshan of a new design by Asa, I had to hop over and take a peek.

When I initially arrived at L’Arc-en-Ciel, it was clearly a work-in-progress, although Asa wasn’t around at the time. So I grabbed a couple of quick shots before scampering off, promising myself I’d pop back for more. I did so a couple of more times, bumping into Ziki Questi on one occasion, and did catch a few changes and additions since my initial drop-in. Indeed, even with the visit which preceded this blog post, Asa was still adding some final touches! 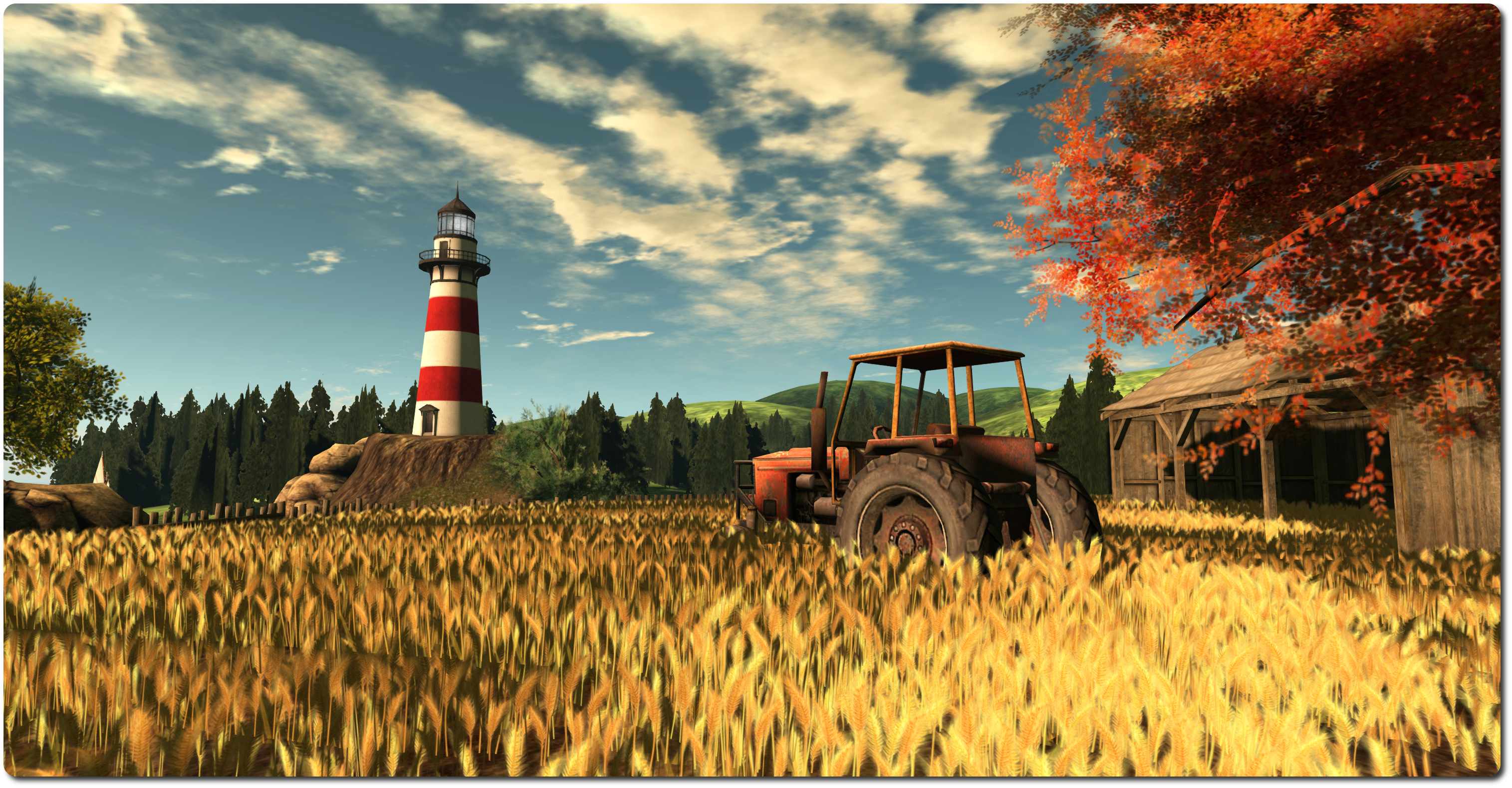 Just as the rainbow from which the region takes its name is defined by its bands of colours, so L’Arc-en-Ciel is defined by the multiple islands which make up its whole. There are five in all, bordered by  an off-sim surround of rolling hills and pine trees.

Each of the islands might be a chapter in a book, or possibly a standalone short story, as each has a little tale of its own to tell. walk along the wooden pier which forms the arrival point to the region and descend the steps, and you’ll find a discarded dress and shoes, as if their owner has decided to take a little skinny dip … but look closer, and the journal lying beside the dress, the nearby suitcases and the little Jack Russell staring out at the departing schooner might suggest another story … perhaps that of runaway lovers…. 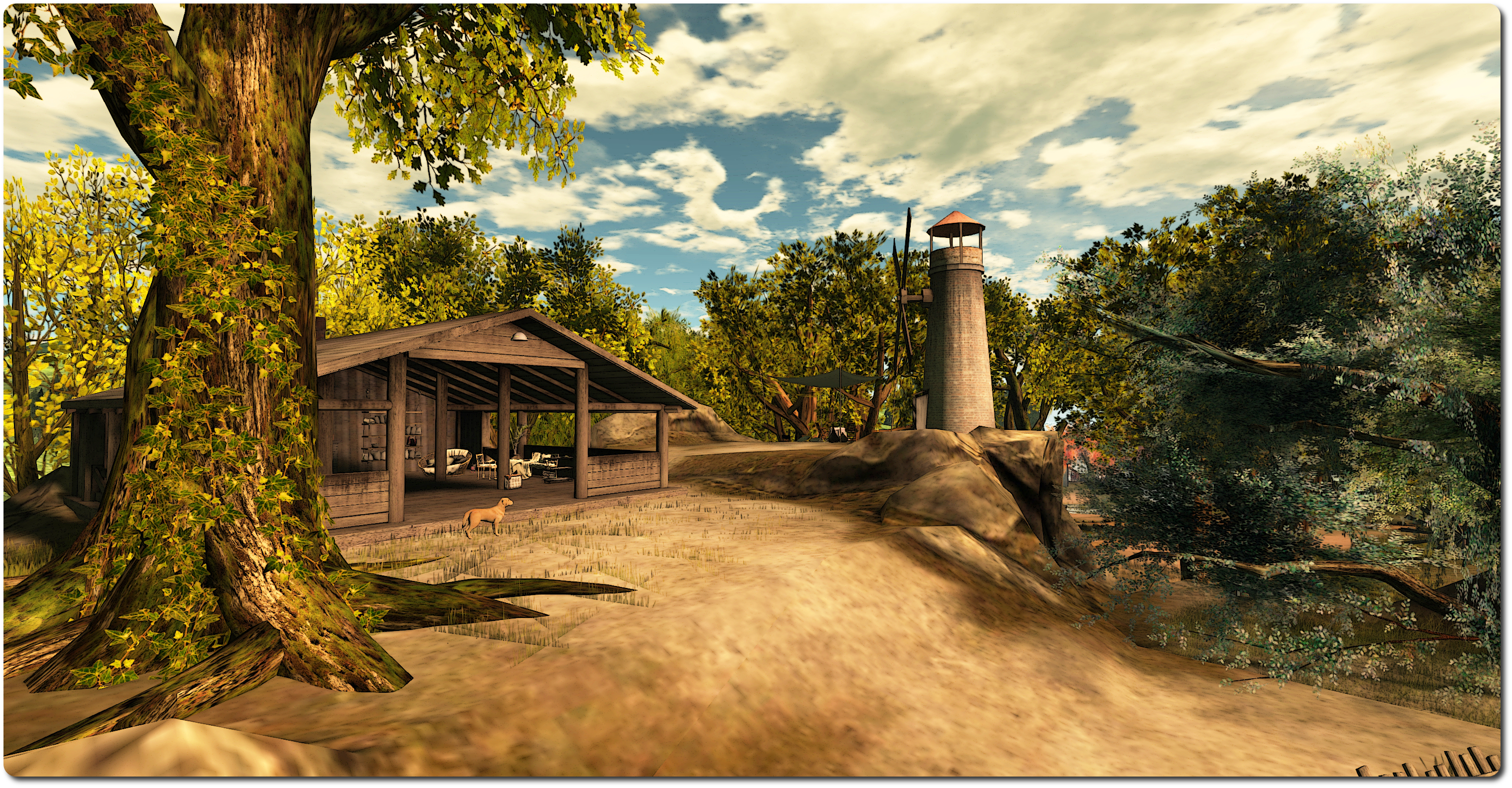 Follow the pier in the other direction, and it’ll lead you to one of the islands, this one with a distinct agricultural feel, with wheat growing across the hilltop and horsed grazing on the far side. A bridge from here leads to the largest of the islands, which offers several points of exploration both at ground level and up on the rocky outcrops which rise from its grassy-sandy base.

Here are many stories awaiting their chance to suggest themselves to the observant visitor. Just who is the tin man, apparently camped on the shore and looking somewhat dejected before his painting? What of the house at the end of the track? Are the people there just back from vacation, packing to go on vacation, or are they holiday-makers, newly arrived…? And what of the white house on the rocky headland? 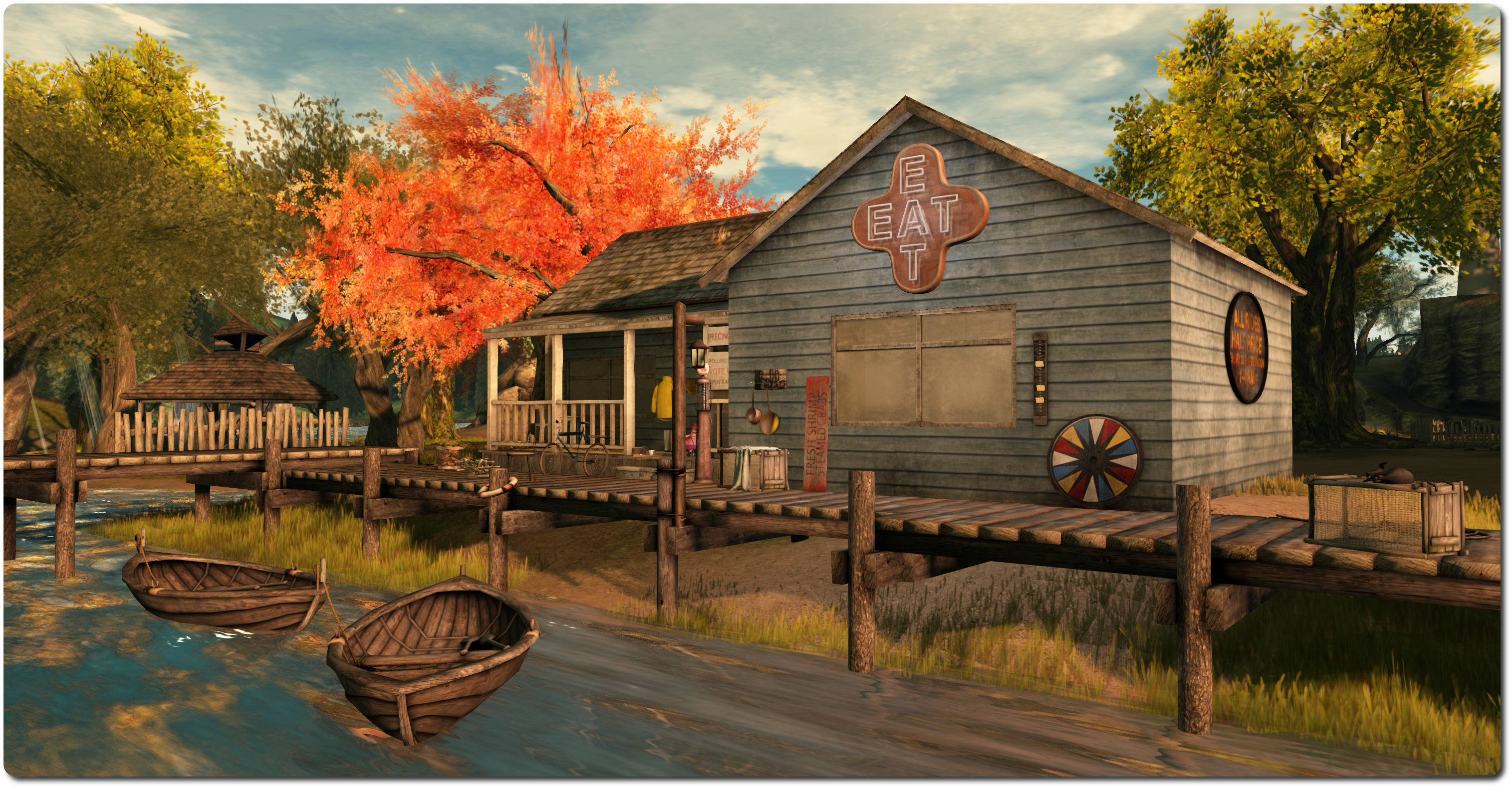 Two more bridges provide links to two much smaller island. On one stands a lighthouse and on the other a small folly. The final island is reached by crossing a shallow band of water. On it, the rain of a summer shower beats on the roof is a run-down cafe which, despite its decrepit state, still appears to be offering someone a home – but who?

Perhaps the key to the stories here lies in the dedication for the region, borrowed from The Story of Life by Jim Hendrix:

The story of life is quicker than the blink of an eye, the story of love is hello, goodbye. 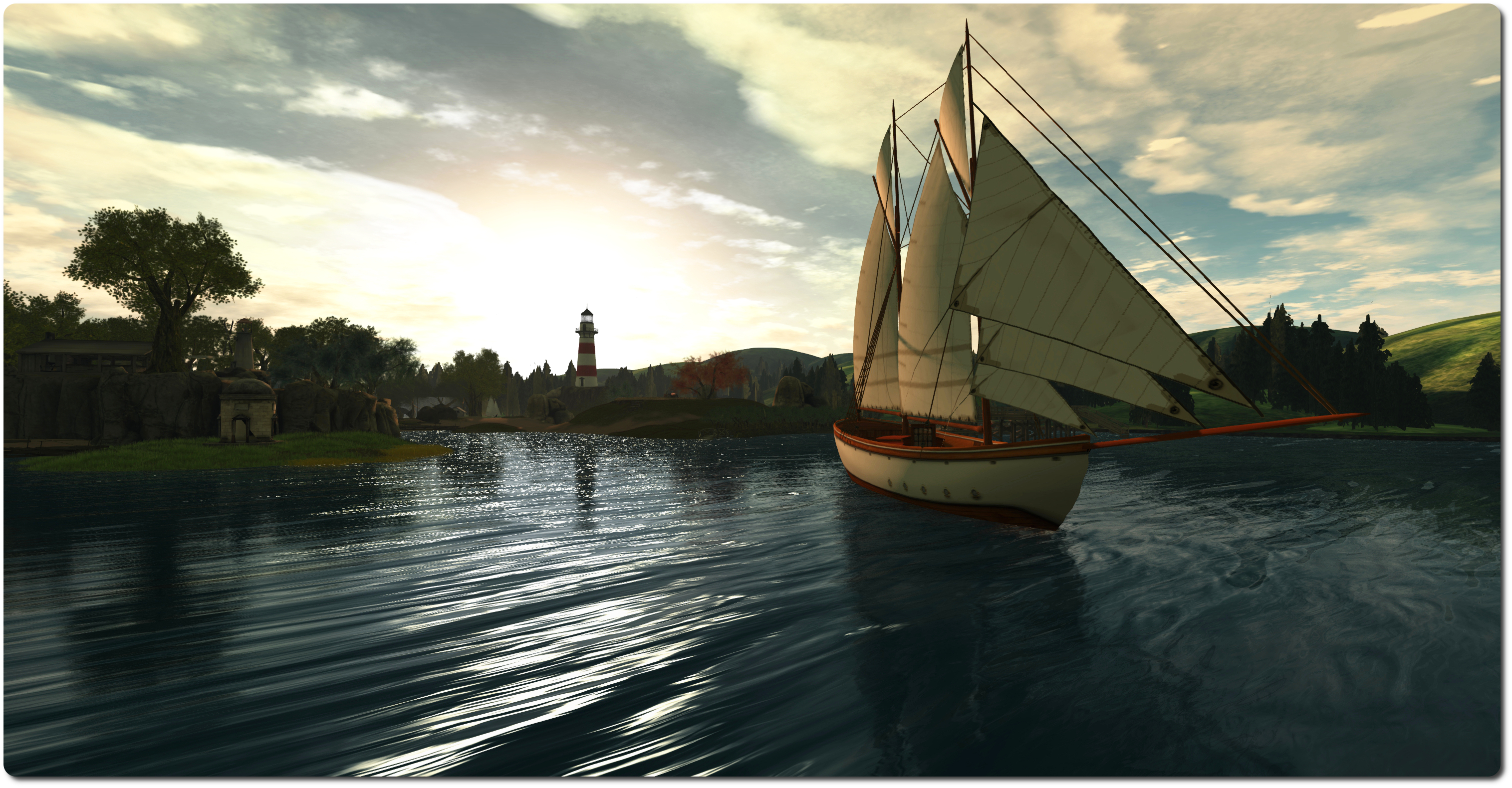 I found the Hendrix connection somewhat appropriate; wandering the island put me in mind of Catch the Rainbow by Rainbow, a song in part inspired by Hendrix’s Little Wing. This being the case, it seems only right that I should leave you with a video featuring that song. Given some of the imagery within the region, maybe it’ll help you cast your own stories amidst the beauty of Asa’s delightful L’Arc-en-Ciel.