As news of the changes to the Lab’s policy of games of skill continues to ripple outwards, people have been questioning what it might mean for assorted games held within their inventories and / or on their land which offer payouts and pay-to-lay options. In particular, a question was asked on the forum thread created by the Lab on games like Greedy Greedy, which have a pay-to-play option. The response from the Lab’s Community Manager was that such games would indeed fall under the updated Skill Gaming policy.

As a result of this, and subsequent enquiries on the KR Engineering Facebook page, Karsten Rutledge, KR engineering’s owner, posted an article on changes that will be forthcoming to all KR Engineering games offering a pay-to-pay / L$ payout capability.

Karsten’s article can be found under the heading Skilled Gaming! What is it? How scary is it? Are we all DOOMED?! On the KR Engineering Facebook page. While this doesn’t require people log-in to Facebook in order to read it, the key points are reproduced below for those who have KR Engineering table games but who prefer not to access Facebook at all.

Because games like Greedy Greedy, On-a-Roll, Triumph, etc., are considered subject to the upcoming changes to the Skill Gaming policy, Karsten has decided to make them all free-to-play and remove all payout options, informing customers:

Before the end of the month, I will be issuing updates to all of my games that remove all money and payout functions from them. With no payout option on the game (no buy-ins and no betting), the games will no longer be subject to the Skilled Gaming Regions policy. You will be able to rez and play them wherever and whenever you like as usual. The new policy ONLY applies to games that have an option to pay the winner of the game a L$ prize. To be in compliance with the new policy, all you will need to do is update your games (which is FREE, as always) before the end of the month, or realistically, whenever you next pull them out. You won’t get in trouble for having them in your inventory, whether they’re in compliance or not.

In further addressing this change later in the post, he continues:

So in conclusion: Keep calm and carry on. Don’t worry, keep playing and have fun. I will announce more as I get questions answered from Linden Lab, and of course announcements will be made when updates are available for each game to bring it into compliance. The games you know and love aren’t going anywhere, they will play just the same and the only difference will be you may not pay money into them, which as it turns out, doesn’t happen 99% of the time anyway, so you won’t even notice.

However, Karsten believes the changes to the Skill Gaming Policy will not affect the Greedy Greedy jackpot, commenting:

As far as I currently know, that will not be going away, playing any appropriately configured Greedy game will still qualify you for the jackpot even after August 1st. The Jackpot is not considered gambling because you do not have to pay to be entered into it. If this changes, I will certainly make an announcement about it.

In addressing the potential for future versions of KR Engineering games offering a payout, Karsten indicates this is questionable, given the amount of outlay required. Furthermore, were it to happen at all, it would likely to be only with regards to Greedy Greedy, and would be a special version of the game entirely separate to the current version:

According to Gaming.SL, only 1.6% of games played to completion this year involved money of some kind. At the moment, I’m sorry if you’re in that 1.6%, but I will likely not be pursuing becoming a creator of approved gambling games, as it will cost me at least $2000 USD per year to do so, and that’s not counting the up-front costs of hiring an attorney, and paying the application fees and review fees.

Depending on the answers I get from Linden Lab in the coming weeks, I may eventually pursue approval just for Greedy, I don’t think any other games get gambled on at all anyway. Even if I do get Greedy approved for skill gaming in the future, it will not effect anyone who already owns a Greedy table, because it will be a completely separate version of Greedy. From now on, there will always be a “no money” version of my games for general use, any “money” versions will always be separate.

So if you have any version of a KR Engineering game which includes a pay-to-play option, do keep an eye out from updates from Karsten, and on the KR Engineering Facebook page for further information.

With thanks to Ciaran Laval. 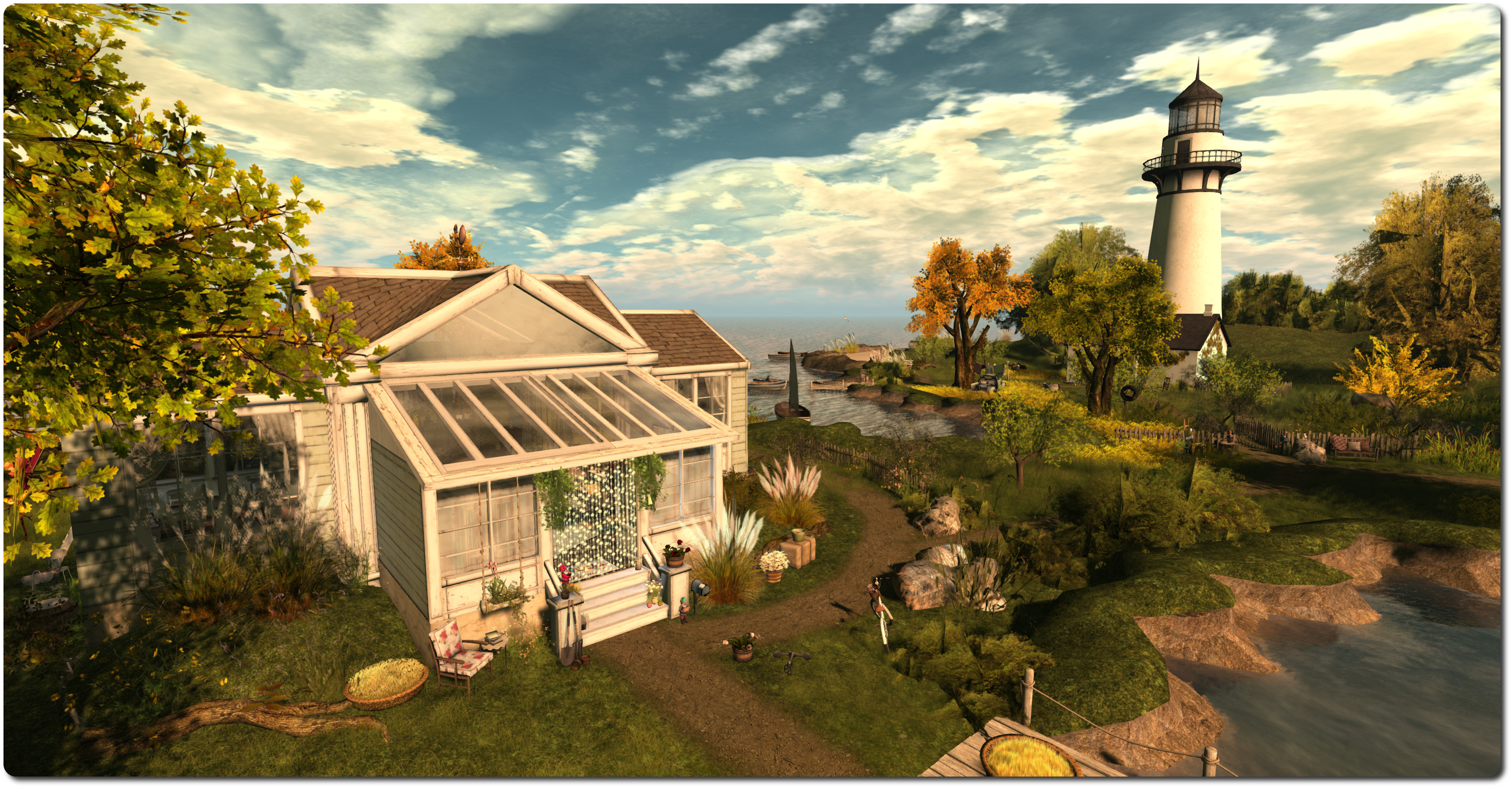 I tend to visit places around SL in bursts. By that I mean I’ll visit five or six at a time, take notes, grab snapshots and then settle down to write about them. This inevitably means the order in which they appear in my Exploring Second Life series can be haphazard, particularly if I find somewhere which demands I write about it right now.

Sometimes it also means that places wind-up as a folder of snapshots and a set of notes sitting on the computer waiting their turn because I’ve *cough* actually let them slip my mind as I bounce around. This doesn’t often happen, but it did happen with NorderNey, Jacky Macpherson’s beautifully pastoral setting on her region of Heaven Scent – and for which she has my sincere apologies! 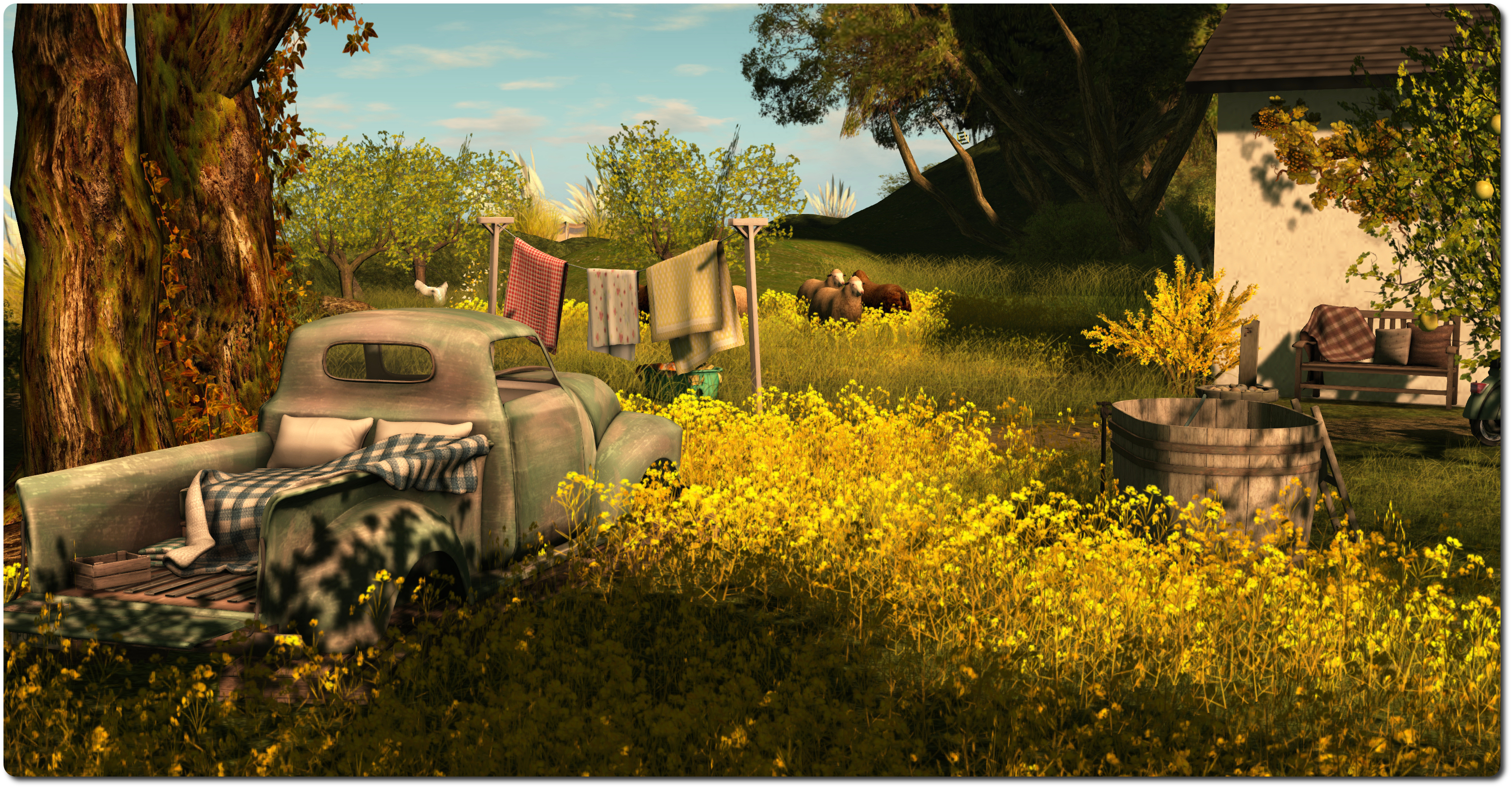 NorderNey is another of those evocative regions in which one can easily feel at home despite never having visited before. It brings together rural and coastal elements in a perfect blend of land and sea that, while it lacks any form of sim surround, still suggests it sits on a stretch of temperate coastline somewhere in the world; a place where the soil is still rich enough for a golden crop of wheat to be grown even as it slowly gives way to sandy shores and the sea beyond.

Two houses occupy the land, almost diagonally opposite one another. From the larger of these, situated next to the landing point, unpaved tracks offer visitors two routes by which to explore the island, one linking the house to the nearby lighthouse and the beach beyond it; the other winding “inland”, along what could easily be a river bank, and past that field of wheat. 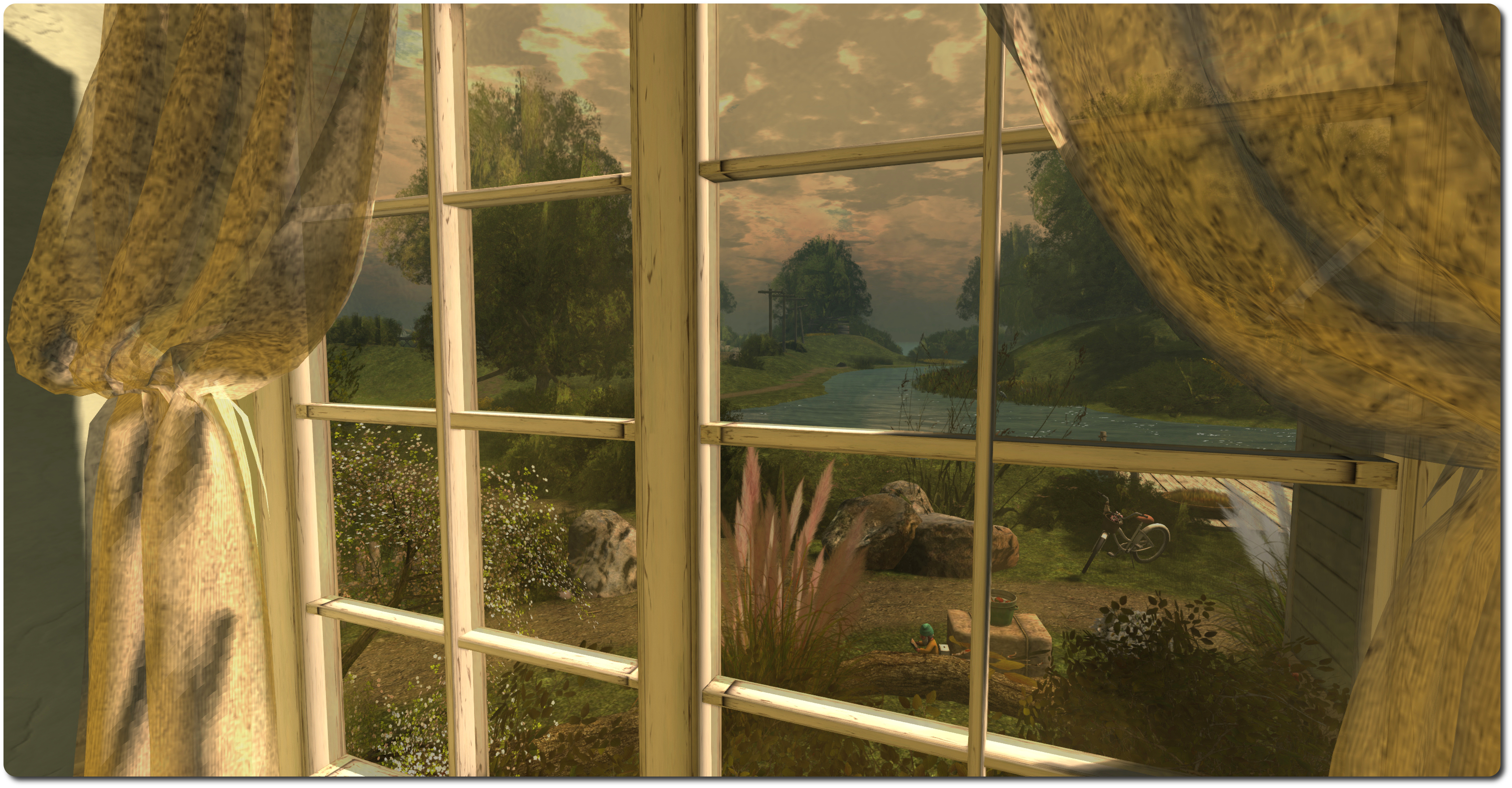 This is a place which should be explored with local sounds turned on, as Jacky has added a sound scape which perfectly matches the setting, giving added depth to the surroundings as one explores. Close to the coast, the sound of waves breaking against the sand and rocks can be heard. Further inland, birds and wildlife sing, chirp and call; towards the northeast side of the island, and the second house, the wind can be heard sighing through the tall grasses and around and between the rocks and trees, while overhead and across the island, gulls cry as they circle on the updrafts. 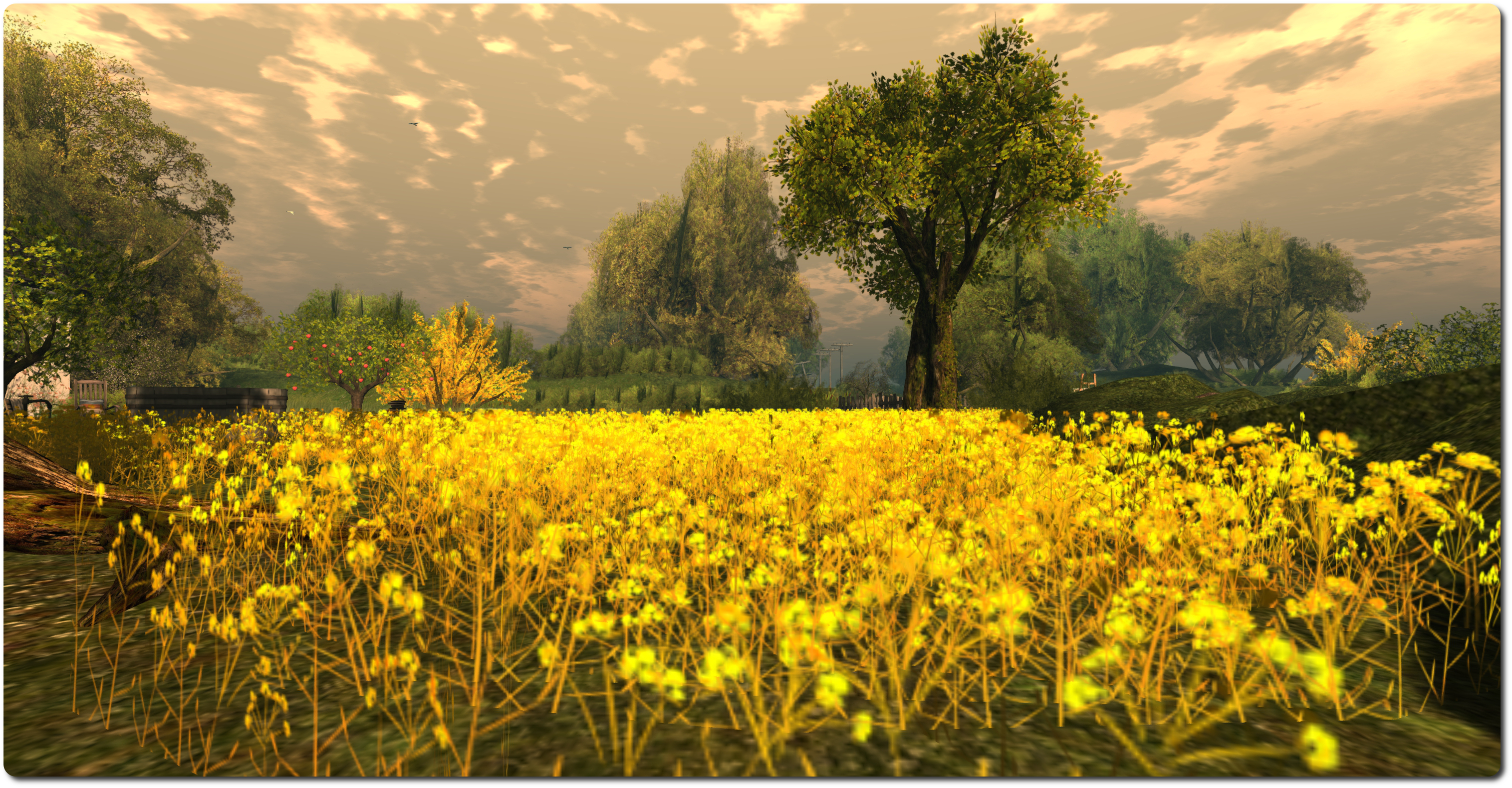 That NorderNey is a photographer’s delight goes without saying – as many who have visited an blogged about it before me have proven. So to is it a delight for those who want to simply wander or sit and forget their troubles or spend a little time in the peaceful company of a friend or two; places to sit and share can be found right across the region, on jetties, alongside houses, on the beaches, in the shade of the trees –  even in one of the many rowing a sail boats moored around the island. 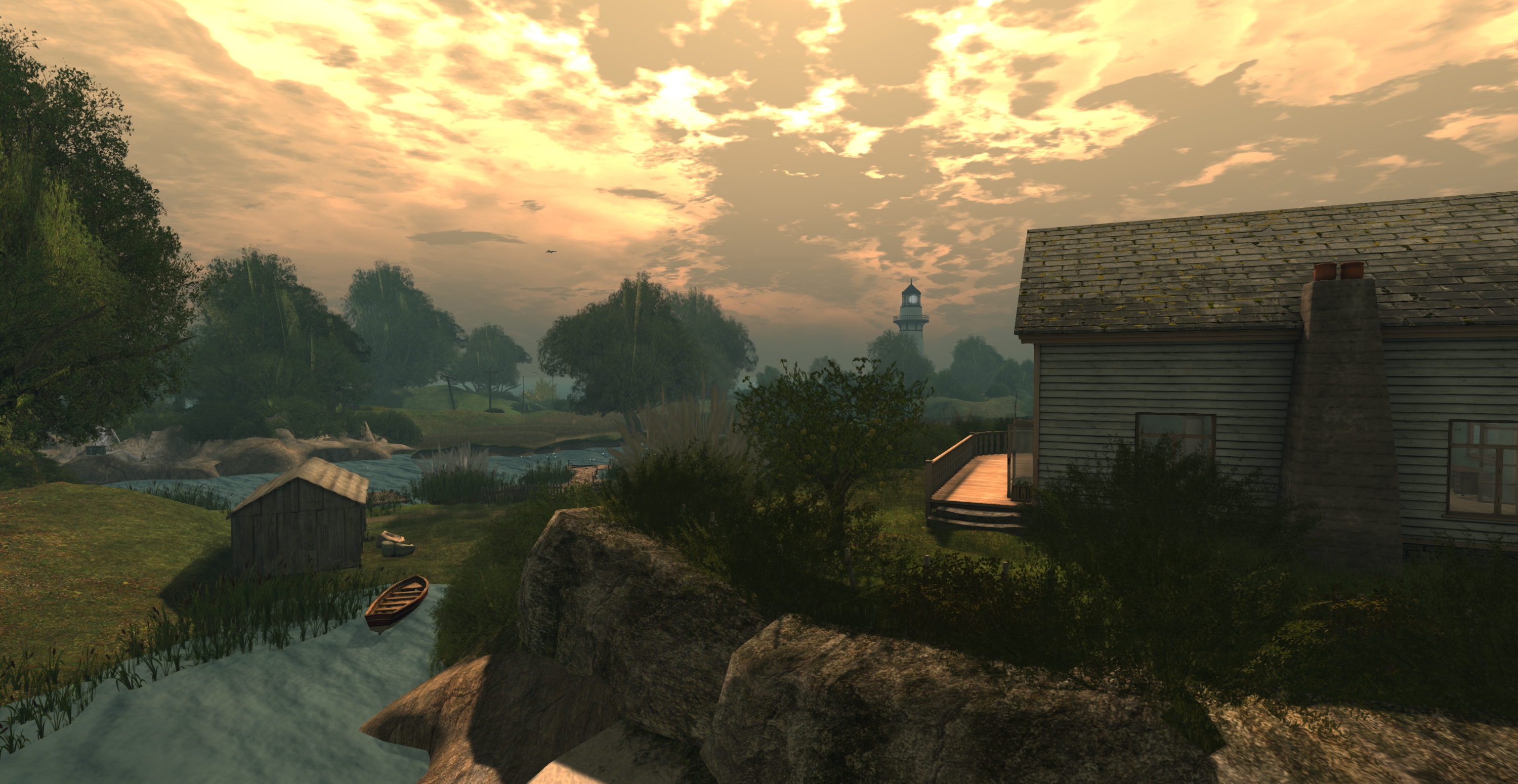 When I first visited NorderNey, I happened to be playing to J.S. Bach on the stereo. Given that sheep are grazing around the lighthouse on the island, the piece I happened to be listening to seemed a tad serendipitous, so I’m going to close with it here.