Sunday February 23rd,13:30: Tea-time at Baker Street: The Adventure of the Cardboard Box

A 1917 anthology of previously published Sherlock Holmes stories by Sir Arthur Conan Doyle, His Last Bow originally comprised seven stories published byThe Strand Magazine between 1908 and 1917. However, later editions of the book saw an eighth story included, The Adventure of the Cardboard Box, originally published in 1892.

The affair begins when Miss Susan Cushing of Croydon receives a grisly parcel of two severed human ears, packed in salt. Inspector Lestrade is convinced that the parcel is a prank on the part of three medical students Miss Cushing was forced to evict from her lodgings due to their unruly behaviour. Lestrade points to the parcel as coming from Belfast – the home of one of the former lodgers – as reason for his suspicions.

On examining the parcel, however, Holmes is certain that they are dealing with a far more serious crime, pointing to the poor spelling used to address the parcel, with rough means by which the ears had been severed and the use of course salt as packaging as being indicative of someone with poorer education and lesser surgical skills as might be expected of a doctor-in-training. So who is responsible? Holmes considers the solution so simple that he asks Lestrade not to mention his name in connection with it …

When humans interact with aliens who are actually alien, we run into the fact that we’re as weird to them as they are to us. This can cause the most remarkable misunderstandings…. More thought-provoking sci-fi from the collection of Gyro Muggins. That work was covered in a series of readings in mid-2013 by Caledonia and Kayden. Now they conclude their reading of the 1992 companion volume to that work, The Te of Piglet.

Te is a Chinese word commonly interpreted to mean ‘power’ or ‘virtue’, but which has far more depth than either, being more a special quality of character, spiritual strength, or hidden potential unique to the individual. Through this book, Hoff further explores Taoist concepts, notably that ‘the virtue of the small’, showing how Piglet has great Te, not just because of his diminutive stature, but because he has Tz’u – a great heart, even if – as is so often the case – he’s generally unaware of the fact that he has.

Shandon Loring brings us one the three romances associated with the Mabinogion. 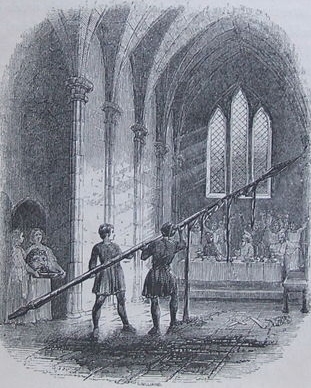 Dating from the 12th or 13th century, Peredur son of Efrawg is a tale somewhat similar in nature to – but necessarily based upon – Chrétien de Troyes’ unfinished Arthurian romance Perceval, the Story of the Grail, albeit with the Grail replaced by a salver containing a man’s severed head.

Left fatherless from a young age, Peredur is raised in isolation by his mother, deep in the woods. After meeting a group of knights, he determines he will become like them, and so travels to the court of King Arthur. Here, while he earns respect for his valour and pureness of heart, he also discovers prejudice, in the form of Cei’s (Sir Kay’s) attitude towards others.

Determined to restore the honour of a recipient of Cei’s insults, Peredur sets out on a series of adventures which mirror those of Chrétien’s Perceval, and which in turn lead to further adventures very different from any in Chrétien’s work, before eventually revealing to Peredur the truth concerning the misfortunes of his family, allowing him to avenge them.