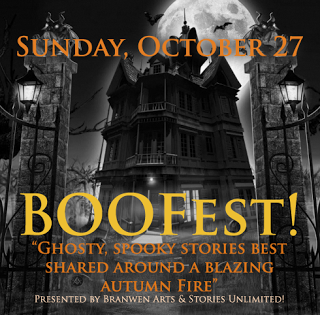 Sunday October 27th marks the third annual BOOFest! a gathering of vocal artists from across the grid, who gather  at  Bran. Here they invite all of us to come sit around a blazing fire and hear tales in keeping with this haunting time of the month.

There will be tales of dark deeds, ghostly goings-on and more throughout the day, with the event kicking-off with a short welcome and introduction by hosts Caledonia Hightower and Dubhna Rhiadra.

Stories will be presented in Voice, so be sure to have a place where you can sit and listen-in in peace. After the introduction, the first story kicks-off at 10:00 SLT.

All times SLT. Please refer to Storyfest SL’s blog for any updates / changes to the programme.

Things are in something of a lull server-side in terms of deployments and projects at the moment, so the news from the Lab is a little light.

With just the one deployment to the Main channel in week 43, the entire grid is currently running on the same server release.

Commenting on the released package at the Server Beta group meeting on Thursday 24th October, Maestro and Simon Linden provided further information on the performance issue fix which is aimed at the experimental interest list viewer (which has yet to formally appear, but can be self-compiled by those with access to the code repository).

“The bug was about avatars not loading for ~70 seconds when you visit an area with ten or so avatars nearby, Maestro explained. “And by ‘not loading’,  you wouldn’t even see name tags.”

“I think the problem was when those viewers used new methods to download or check the cache state of some data … it would over-load the network and thus the avatar updates were really slow,” Simon added, before continuing, “Since the current viewer doesn’t do that, they don’t have the bug. Clubs and large crowds are always a problem because when you arrive you just get a ton of data to fetch and load.”

Week 44 should see what Maestro described as a “minor maintenance release” for the server appearing next week, which includes “a few miscellaneous crash fixes”. At the time of writing it is not clear if this will be the only RC deployment or whether anything else might also pop-up when the deployment thread is published.

Baker Linden’s Group ban list work remains on internal testing within the Lab (with Maestro and Caleb Linden volunteering as Baker’s guinea pigs). The project has also apparently been awaiting internal QA resources.  Baker hopes to have a detailed update on progress in week 44, but as he said at the Server Beta meeting, “I’d rather take the time to do it properly than rush it out the door and have it be worthless! :).”

As reported in week 42, A problem had been noted following-on from the recent updates to prevent people from using recursive rezzing which means some engaging in combat have found combat vehicles in regions with short auto-return times can have their ordnance immediately returned when a weapon is fired, and any temp vehicles are unable to rez attachments, even when sat upon. Maestro confirmed that as a result of a feature request having been raised, Andrew Linden is now looking at introducing a special exception for temp-on-rez / auto-return timer inheritance when the rezzer is a vehicle.