Elie Spot is a name well-known in the fashion world of SL. The co-owner of Mon Tissu and Celoe, now both on their dedicated and stylish region of Mayfair, she’s also the subject of episode 9 of The Drax Files.

Involved in Second Life since 2006, Elie is very much an example of the way in which the physical and the virtual can blur together and complement one another. Given her father designed games and her mother is a graphics artist, it is perhaps not surprising that Elie herself is a designer in the digital domain. But to leave things here would be to miss out on the most interesting part of her story.

Having joined SL at nineteen as a means to escape a very hectic daily routine, she has not only established two successful brands in-world, she’s found the additional skills and understandings she’s gained through running those businesses have helped to enable her to take-up business opportunities in real life, such as with Cake & Whiskey, which she co-founded in Spring 2013, following-on from the creation of Offbeat and Inspired in 2012.

As one might expect from both a content creator and long-term resident of Second Life, Elie has an understanding of the nuances of the platform, and the reasons people find it so attractive and appealing. The ability to create almost anything you want, for example, or to be able to create and build a business or brand, to share with others in a myriad of ways, and the opportunities for escape and to be whomever or whatever you want.

In discussing this and Second Life, Elie touches on one of the stigmas attached to Second Life from the world at large.

“It’s just a very common misconception that if a person sits down at a computer and starts talking to other people online that they’re hiding, or that they don’t have social skills.” she says. “I mean to take a personality type and look down on it like that and to project that on an entire culture of people? It’s just a little bit strange.”

It’s what I’ve been known to refer to as the “Star Trek syndrome”: the views that people involved in Second Life and platforms like it need to somehow “get a life”. Sad to say, the attitude isn’t necessarily restricted to people on the outside looking into Second Life; there are a lot of examples of people engaged in the platform taking a stance of perceived moral  / social / intellectual superiority over others, simply based on how those others like to portray themselves within SL, even though in doing so they do not impinge upon the lifestyles or in-world activities of those looking down on them.

That people do is really a shame, because Second Life can be liberating, and allows us all to reach past barriers and inhibitions defined by circumstance and / or society, and enjoy a freedom of personal expression and freedom of interaction with others from around the globe whose interests overlap with our own. The fact that some people are unable to accept others purely on the basis of how they seek to express themselves through their in-world appearance, perhaps speaks more to the prejudices of those unable to give acceptance, and to their own limitations of imagination and creativity.

Elie’s insights aren’t restricted to the unfortunate habit of stereotyping SL users, however. She is, first and foremost a very successful businesswoman in Second Life, and as such has some very clear and practical advice to give to those wishing to start-up a business of their own, as well as touching (again) on the wealth of opportunities presented in SL for doing to and the freedoms one can experience which are in may respects unique to the platform.

This is another excellent insight into Second Life and the broad potential of the virtual medium. Elie’s narrative is both clear and direct, but also carries a warm passion for the platform which is a joy to listen to, marking this as yet another outstanding piece in what is already an outstanding series.

A Conversation with Drax 5: The Creative Process

The Drax Files have taken Second Life by storm. Each segment is a rich piece of video journalism reaching into the heart of the platform, its appeal and its potential; so much so that they invite discussion and feedback. And who better to do that with than the man behind the series: Draxtor Despres.

As this segment once again carries a very strong narrative theme, as presented by Elie, I thought this would be a good opportunity for the two of us to discuss the creative process by which each episode comes in terms of any underpinning theme or message. 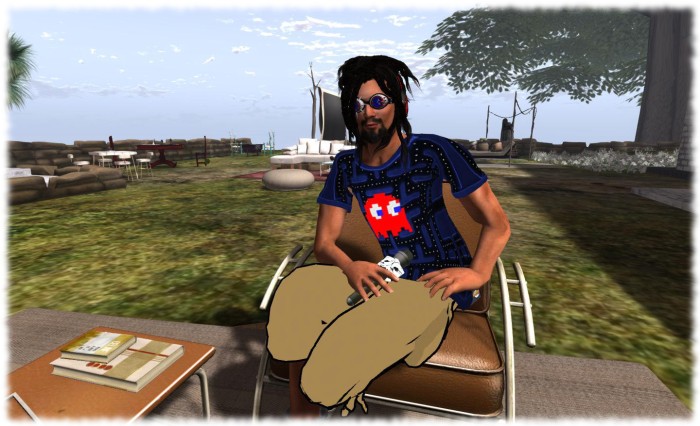 Inara Pey (IP): Obviously, each episode of The Drax Files has set out to explore, from a personal standpoint, what Second Life means to those people you’ve met and interviewed; how they became involved in the platform, how it enables their creativity and so on.  However,  in several cases there is frequently a more broader narrative or reflection.

In this piece, for example, we have Elie talking about perceptions of the on-line life and the social stigma which can be associated with it by those outside of the environment.  Is this kind of subtext something which is planned going into each episode? And if so, does it come about as a result of talking to the interviewee beforehand? Or is it more a case of happenstance arising from what is discussed during the course of an interview?

Draxtor Despres (DD): It’s actually somewhat unplanned. My goal is to be authentic to the person, to profile the person. But in the back of my mind there are all of these perceived stigmas about Second Life which do contrast with all the possibilities that we all see and that I wanted to bring to the fore; so I do conduct the interviews with that in mind. It’s not that I’m digging for these quotes; the fun thing is that they come out naturally.

IP: Interesting things happen when people talk about a subject they are equally passionate about, even if they come to it from very different perspectives.

DD: Yes! And remember that this is often a one or two-hour conversation, with many follow-ups. So people do tend to very naturally say very similar things: the power of the avatar to reflect your inner self, the creative release and all that. So I don’t have to dig for that as if I were a making a promotional video of a company and trying to get the sound bite.

IP:  In previous segments, there have been some nods towards the SL / RL overlap, but this is perhaps the first time there has been an active exploration of how the two can actually  – to use Elie’s words – mesh and inspire; that just as our real-life skills and experiences can help shape and develop our in-world creativity, so to can our in-world experiences and the knowledge we gain from our in-world endeavours help further our real-life creative aspirations.

DD: That was so great that it came from Elie! That was a long riff that I cut down; she was very elaborate on how she feels about judging people, and I suppose that comes from her background in coming from a family that are all gamers, so they all have their hobbies in games and she has it in SL. Although one thing I didn’t put in the video is that people within her family were actually making fun of her for being in Second Life, and that was another angle, which could have been the main focus of the piece, but I decided against it.

IP: Even in missing it out this time around, I doubt it’ll be the last time we’ll hear it touched upon, as the gaming / SL perceptions divide is so prevalent.

DD: For sure. That’s certainly an aspect that I think will come back in future episodes, because it is one of the major debating points about SL, as we got into last time; the whole “is it a game, it isn’t a game” and all that.

But to come back to the original question: everything evolves during the conversation. In that sense, I’ve done very little background research about the person. I do that on purpose because I know I can conduct interviews, that I’m good at that, and I know my skills set. So I have the confidence that I can get what I need to put the piece together and that if I don’t, I can follow-up. But the main thing about doing as little preparation in terms of background research as to who people are – I mean I do obviously search them out as potential spokes people for their particular field – is because I don’t want to overtly influence how a conversation may start and proceed.

IP: The selection process itself must be difficult; determining who to talk to; especially when establishing a series like The Drax Files.

DD: Definitely. And picking who I talk to over others is very deliberate, as I want to reach as broad a cross-section of the Second Life community as possible.

For example, in the next episode, is an old-timer who has been around Second Life a long time. I know very little about them, but I’ve seen some of the instructional videos they’ve made and the content that they make. But this person has such a great story to tell; some old-timers may already know it, but nobody outside knows. They’ll be the oldest I’ve yet profiled, but they have a vibrancy and energy that I think will be amazing to watch.

IP: And that little teaser sounds like a good place for us to wrap this conversation for now and maybe pick-up on things as the next piece starts coming together!

10 thoughts on “The Drax Files 9: Fashioning your world”