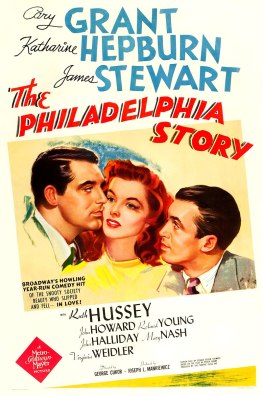 The tea-time team return to 1940 and George Cukor’s romantic comedy starring starring Cary Grant, Katharine Hepburn, James Stewart, and Ruth Hussey. It’s also the film – believe it or not – revived Hepburn’s career after she’d inadvertently found herself on a list of Hollywood actors considered to be box office poison after appearing in a series of flops.

Based on the successful Broadway play of the same name, the film follows Tracy Lord (Hepburn), the elder daughter of a wealthy Philadelphia socialite family. Having divorced her first husband, yacht designer C.K. Dexter Haven (Grant), she is now set to marry the  nouveau riche “man of the people” George Kittredge (played by John Howard). The wedding has drawn the attention of the printed media, and reporter Macaulay “Mike” Connor (Stewart) and photographer Liz Imbrie (Hussey) are dispatched from New York to inveigle their way into the the Philadelphia  socialite circles with the aid of Dexter Haven, in order to get the scoop on the nuptials.

Whilst not in the least bit fooled by the subterfuge Dexter Haven attempts to use to introduce “Mike” and Liz into their world, Tracy nevertheless is disarmed by “Mike” and realises he has admirable qualities. At the same time, it is evident that her mother feels Dexter Haven is still very much part of the family, allowing him back into Tracy’s orbit. As a result she starts to find herself torn between feelings for Dexter Haven, “Mike” and poor George.

Things then get really complicated on the evening before the wedding, and spill over to the morning of the wedding itself, prompting a crisis when George walks out on Tracy. Will there be a scandal, or will the situation be rescued – and if so, by whom – C.K. Dexter Haven or the honourable Macaulay “Mike” Connor? Join Corwyn Allen, Gloriana Maertens, Caledonia Skytower, Da5id  Abbott, Kayden Oconnell & Elrik Merlin to find out!

A world ruled by sentiment big cats where the rule of law is enforced by the Weighers, a combination of judge, peacemaker and accountant through a brutal code of honour and combat. Without their violent intervention in things, all-out war and anarchy would ensue.

When two human explorers – fragile, weak and potentially easy prey – arrive on that world, Slasher, a Weigher of skill and talent in physical combat, finds herself defending them. In doing so, she finds herself a disgraced outcast.

Join Gyro Muggins as he read the story by Eric Vinicoff and Marcia Martin.

a collection of J.K. Rowling’s writing from the Pottermore archives: short reads originally featured on pottermore.com. These eBooks, with writing curated by Pottermore, will take you beyond the Harry Potter stories as J.K. Rowling reveals her inspiration, intricate details of characters’ lives and surprises from the wizarding world.

“From Gilderoy  Lockheart to Madeye Moody, and summat in between” – with Caledonia Skytower.

Finn Zeddmore takes the story floor with this tale by Ann Leckie and Rachel Swirsky.

Contemporary sci-fi-fantasy from on-line sources such as Escape Pod, Light Speed, and Clarkesworld, with Finn Zeddmore.

Join Caledonia Skytower as she presents the 37th novel in the Discworld series, and possibly one of its greatest satirical undertakings encompassing football, academia, traditions, the fashion industry, politics, love, fandom, and which mixes in more serious themes of identity, crab mentality and self-worth.

It’s been a while since I’ve visited Luane’s World, the estate held and operated by LuaneMeo, but a recent blog post by Rig Torok of the estate’s main Full region – Le Monde Perdu (The Lost World)- gave me pause to take a jump back and take a fresh wander.

Le Monde Perdu is a beautiful, romantic Island far away from everything. A place where you can find inner peace, enjoy and relax. Landscaping by LuaneMeo and Gorba McMahon.

– from the region’s About Land description

I first visited the region in 2016, and then again in 2018. At the time of both of those visits, Luane’s world occupied a different location as an estate with two regions encompassing public spaces, Luane’s store and Luane’s Magical Garden. Today, the estate comprises five regions  – the main public region of Le Monde Perdu, and four residential regions gathered to the north of it, and both the store and Luane’s Magical world have shifted into the sky, reachable via teleport.

The ground level of Le Monde Perdu presents itself as a rugged island with a high horseshoe of hills skirted from south to north via the west coast by a sandy beach, with the eastern side falling to a narrow ribbon of rocky, shingle waterfront sitting between cliffs and shallows. At roughly the mid-point along the island’s south side, the hills break, allowing the sand to flow inland and cup the waters of a freshwater pool at the heart of the island, fed by falls that tumble down the cliffs that form the pool’s north side.

Within this setting there a a lot to see and capture, thanks in part to a use of altitude and landscaping – the hills aren’t all of a single height but offer stepped rises that present natural shoulders that present spaces which Luane and Gorba have used to the fullest. To the south-east, for example, the hills rise from the entrance to the inner pool to offer a choice of routes: one around the statue at the top of the rise and then down to a ribbon lake that sits on a lower shoulder, or left along a cobbled path that branches at the foot of a further rise.

The right branch of this path curls up around the the next rise of the hill reaching its top and the small farmhouse sits there alongside a sparkling, fast-flowing stream that tumbles down along the spine of the hill to help feed the freshwater pool below via its own falls. The left branch of the path, meanwhile, descends along a gentle slope to where a dining table has been set out beneath a net awning that also overlooks the central lake. The path to this dining area also offers a way down to (or up from) the lake via steeply-set steps, so giving visitors a further route of exploration.

The top of these steps is also home to a zipline that spans the mouth of the southern cutting, giving a means to reach a cabin that sits above the beach to the south-west, nestled under a truncated peak that feeds another stream that runs around the ridge of the hills to reach the north side waterfalls..

The shelf on which the cabin sits runs west and north around the island to reach a cavern, passing steps that climb up to it from the beach, whilst also offering visitors a further option to go horse riding within the region (there is one at the landing point, alongside a bicycle rezzer, although options for comfortable riding are a tad limited due to the lie of the land).As a further attraction, a little pond sits just down from the cabin, the home to a family of otters.

These otters are just a touch of the wildlife to be found across the island, and part of the fun in exploring is that of coming across the various animals and birds / waterfowl. Some are easy to spot, others might require keen eyes; some might even appear a little threatening / intimidating – the shark casually swimming alongside a part of the beach where paddling is clearly encouraged, and the bears within one of the island’s caverns (the second of these runs through the western hills between inner and outer beaches).

The richness of detail across the region cannot be over-emphasised; wildlife, plants, overall design, placement of buildings and structures, and places to sit have all been carefully considered to present Le Monde Perdu as a perfectly natural environment that flows from point to point, whilst also offering numerous individual locations that are either highly photogenic or offer places to sit and appreciate the surroundings – or both. And if you want to catch a different perspective of the island and its surroundings, try hopping up to the hot air balloon that floats serenely above it.

Finally, don’t forget that there is also Luane’s Magical World awaiting a visit in the sky overhead as well. You can reach it via the SLurl here, or via the experience-based teleport sign alongside the ground-level landing point for the region. I’m not going to delve into that here; suffice it to say it is another engaging setting, and I’ll leave a little taste of it with an image.

Captivatingly set and with a lot to see (and do), Le Monde Perdu remains a thoroughly engaging visit.