In the year AD 3017, humanity is recovering from an interstellar civil war that tore apart the first Empire of Man. The Second Empire is busy establishing control over the remnants of its predecessor although some worlds don’t appreciate bring brought to heel. Following the quashing of a rebellion on New Chicago, Commander Roderick Blaine is given temporary command of the battlecruiser INSS MacArthur, and charged with transporting the suspected leader on the New Chicago uprising Empire’s centre, the planet Sparta.

The route takes the MacArthur to the New Caledonia system, where she is ordered to intercept a sub-light vessel that appears to come from a yellow star referred to as the Mote, as from New Celedonia, it sits in front of a massive red star, like a mote in an eye.

Unfortunately, the encounter with the alien vessel does not go well. But has a result, the MacArthur is dispatched to the Mote alongside of the battlecruiser Lenin, charged with trying to establish first contact with the race the built the sublight ship – whom humans have nicknamed “Moties”.

Arriving at the star, the human ships find a race far more technically developed than had been thought, and old enough to have developed into a series of highly-specialised sub-species. Thus begin an fascinating tale of first contact between races, one that encompass a range of dances – political, strategic, and more – in which motives are varied and secrets hidden. 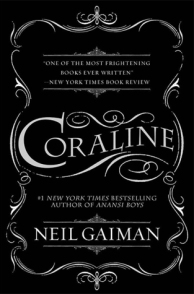 When the Jones family move into a Victorian house that has been converted into a set of flats, and her parents always busy and wrapped in their work, young Coraline sets out to discover all she can about her new home.

Along the way, she meets a pair of retired actress sisters, an old man trying to train a mouse orchestra, and a door that, unlike all the others that lead somewhere, oddly opens onto a brick wall.

Until the day it doesn’t, and instead opens onto a hallway leading to another world.

It’s a world just like her own, but also very different. The flat she enters looks just like her own, the neighbours are just like those she has met – but oddly younger – and the mother and father she finds within the “other “home dote on her: marvellous toys, magical books and wonderful food.

This other home and the parents within it are all that Coraline has ever wanted – until her other mother tells her she can stay and live forever – if she will have buttons sewn into her eyes. Scared by the request, Coraline returns to her real home, only to find her parents now gone. Realising they have been taken by her “other mother”, she realises she must return along the hallway and risk her future in order to rescue them.

When Lily and her family move in with her sick Halmoni (grandmother), a magical tiger straight out of her halmoni’s Korean folktales arrives, prompting Lily to unravel a secret family history.

Long, long ago, Halmoni stole something from the tigers and now the tigers want it back. So the tiger visiting has arrvied with an offer for Lily: return what Halmoni stole in exchange for the return of her health Halmoni’s health.

It is a tempting offer; but deals with magical tigers are not always what they appear to be. So Lily must, with the help of her sister and her friend Ricky, find her voice and her courage, and face whatever trickery the tiger may conjure.

19:00: Revisiting the Poetry of the Planets

Caledonia shares Holst’s music and the poetry written and submitted as part of her 2017 LEA project, in the Glen.

We built this for our own fun last year during a global pandemic. We wanted to know what it would be like if Lockdown never ended… let the plants and nature take over. So welcome to our little piece of calm. Please explore all!

So reads the introduction to * nourish *, a parcel Shaun Shakespeare recently pointed me towards. Located on a Full private region, this is small parcel  – just over 2,300 square metres in size – that packs a lot into it.

Designed by Molly (MollyWolliDoodle) with the assistance of Matt (MatthSuogan), the parcel is focused on a street scene – but not your typical street. As per the description, this is a place where a pandemic lockdown has meant that nature has moved in, leaving the local businesses overgrown with the road and footpaths becoming cracked as grass makes its presence felt.

The businesses lining either side of the road look as if they haven’t opened in a long time – and not even social distancing has allowed their proprietors to  maintain their frontages, although their neon signs continue to shine as if to enticing possible customers.

Conversely, the local multi-storey – clearly no longer required for the purpose of parking cars – appears to have been taken over as a kind of club environment and social space. It stands a little at odds with the idea of a lockdown preventing people gathering together, so one can only assume that it has been taken over by those within the same social bubble.

The roof of the building has been converted into a place for games and partying – and quite imaginatively so; including the conversion of a locomotive caught on the elevated tracks that pass the structure.

This rooftop setting is actually the icing on what is a compact cake of rich detail. From the street slowly being reclaimed by nature through the multi-storey to the waterfront with its rough beach and broken house, there is plenty to catch the eye and the camera lens, and the apparent contradictions (subject to a never-ending lockdown and the construction of the place intended to bring people together) simply work. In fact, the contrast talks to the the realities seen within the current run of restrictions on public / social gathering.

There is a certain novelty to the setting that is engaging and which makes a visit more than just the opportunity to explore; it encourages visitors to spend time simply appreciating the design. And the novelty is more than skin deep, so to speak – should you drop in, be sure to walk down the steps to the subway; there is actually more there than might first meet the eye.

Sunday, April 18th will see the Community Virtual Library celebrate its fifteenth anniversary with the opening of their new in-world library building and resource centre.

Founded in 2007, the Community Virtual Library (CVL) carries the tag line of “a real library in a virtual world”, and is affiliated with the American Library Association. As a library, it includes all of the facilities you might expect: the ability to select and read books on a wide range of subjects (courtesy of the Gutenberg project) and categorised as one would find in a physical world library; a reading room, resources to help with research, links to world literature presented by country / language that reflects the international nature of Second Life, and so on.

However, CVL is far more than just a virtual reproduction of a physical world library – it is a community hub offering opportunities and resources for learning, resource-sharing, and exploration. It offers facilities and presents opportunities for CVL members and affiliated groups to mount exhibitions and presentations and hold events and meetings. It also connects with library communities throughout Second Life, bringing together digital citizens with the information and resources they seek, and provides support to educators and educational organisations.

CVL’s Full region provides a range of facilities operated directly by CVL and also by affiliated groups, offering a rich mix of literature and arts, and is a core member of the IRC 501(c)3 non-profit New Media Arts Inc. In addition to a presence in Second Life, CVL has also extended into various virtual worlds utilising OpenSimulator, including 3DWebWorldz, Avacon, CybaLOUNGE, and Kitely, either by establishing a dedicated facility within these worlds or by partnering with libraries already operating within them.

To mark CVL’s 15 years of operation and the opening of the new library building, there will be a special 2-hour event visitors and CVL members alike are invited to attend. Commencing at 12:00 noon SLT, on Sunday, April 18th, 2021, it will include opportunities to tour the new building and hear from staff and volunteers about CVL’s history and future plans.