As a rule, I’m not a great believer in self-promotion, however, I also have to admit to being delighted and honoured to be invited by John Huntsman to present some of my images of the places I’ve visited in SL in the opening exhibition of 2021 for Kultivate Magazine’s Loft Gallery.

As I’ve oft – and genuinely – stated, I do not consider myself as “artist” when compared to the many, many talents of genuine artists who have a genuine talent for bring Second Life and its avatars to life; my work is really attempts at illustrating the places I visit rather than trying to be any form of artistic statement. So, when I receive an invitation such as this, I am genuinely (and quite considerably) honoured and flattered. In  this case, very, very much so, given the calibre of artist who are generally invited to exhibit at the Kultivate galleries.

I’m also not great with opening events – I prefer to keep to the background and patter / putter around where I can’t be notice. However, and all things being equal, I’ll be at the Loft for the opening John and Tempest have arranged, and I hope that you’ll drop by either for the opening event from 12 noon SLT on sunday, January 3rd, or over the next few weeks and have a peek at the images I’ve selected for the exhibition.

Many thanks again to John and Tempest for arrange this exhibition. 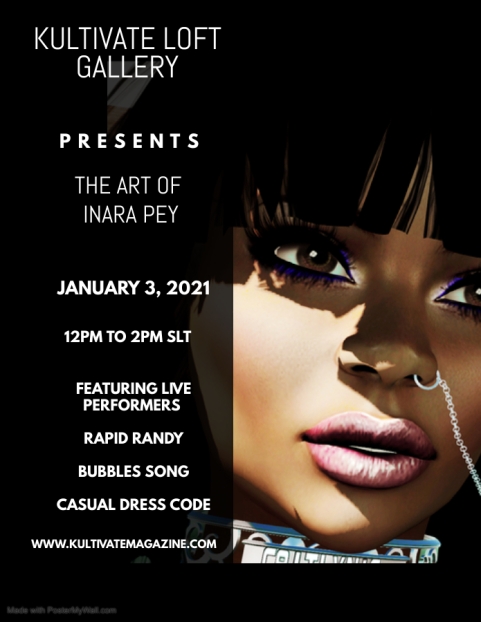 Shawn Shakespeare got us off to our 2021 visits around Second Life with a suggestion we drop into Ambient Hideaway, a Homestead region that is a joint design by Yoyo Collas with the assistance of Mirias and Silly Snook.

A rugged setting currently caught beneath the cloak of winter, the region comprises a large island with a north-to south orientation with a smaller shelf of rock to the south-east, reached via a wooden bridge.

Visits commence in the northern highlands of the main island, a plateau sitting atop cliffs rising from an icy sea.It is home to a cosy restaurant bar delightfully called The End in contrast to it actually being the start of a journey through the region. With seating space both indoors or out under the low-lying (mesh) clouds, the bar shares the plateau with a small hall where visitors can find out about the region’s photography contest which still had a few days to run at the time of our visit, the closing date being January 6th, 2021.

There are three routes down from this plateau, each of which offers its own opportunities for discovery. To the west, wooden steps and a board walk lead down to first a lower shoulder of the plateau and then to a finger of rock pointing west as a slender promontory. Deer wander here, and a wooden cabin lends the warmth of a fire within and that of a brazier to the rear, where the snowy slopes drop down over frosted rocks to the ice and cold waters of the sea below.

Further steps  lead down to a deep bay that faces south-west, sitting between the western promontory and the southern lowlands of the main island. The bay holds within its arms a frozen beach and an old pier and deck extending into the waters, what might have once been a warehouse located on the deck now converted into a cosy snug.

Stone steps climb gently from the east side of the snow-covered beach to link with the second route down from the plateau with its bar and restaurant. Watched over by a Canadian goose and an impressive statue of a stag-headed female figure (“Hern the huntress”, perhaps?), this second path down from the landing point offers the way to a long, thin sand bar that points south and east to where a great circular tent stands in a suggestion of Genghis Khan, the horses walking the sandy finger perhaps adding the feeling one is travelling time to the Mongol times as one follows it to the tent.

Also reached from the path is an open-sided gazebo with a hint of the Christmas just passed standing alongside it, as both stand over the bridge leading to the smaller island. A beach house awaits discovery on this small shelf of rock, and while it lacks a fire inside, a brazier on the deck outside offers an invitation for visitors to go in and a spend a little time away from the cold.

The third route down from the high plateau is by way of wooden steps and platforms to a low-lying out-thrust of flat rock with a shale beach on its north side. An old shipping create, perhaps washed ashore years ago, resides here, but rather than being left to rust and fall apart, it has been turned into a comfortable little hone, complete with windows and doors cut into its side, a large raised deck offering additional outdoors space as it overlooks the beach.

This is a setting that appears to be a lot larger than the 256×256 metres of a Second Life region, the natural shaping of the land and the use of elevation and defined paths giving a sense of expansive space, while the sound scape adds to the sensation that this is place within the wilderness – perhaps an island in northern latitudes lying off the coast of a continent that is itself caught in winter.

There is a wealth of detail to be found within the setting as well – be it outdoors or within the various buildings. Couples are clearly welcome here; there are numerous opportunities for romance waiting to be found in the form of cuddle spots such as that waiting at the end of the western promontory or the old cable-car sitting on the edge of upper plateau.