It’s time to highlight another week of storytelling in Voice by the staff and volunteers at the Seanchai Library. As always, all times SLT, and events are held at the Library’s home at Holly Kai Park, unless otherwise indicated. Note that the schedule below may be subject to change during the week, please refer to the Seanchai Library website for the latest information through the week. 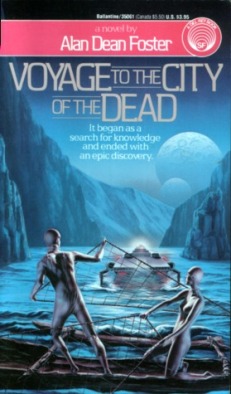 The Humanx Commonwealth is an interstellar ethical/political entity spanning multiple star systems and worlds. One of the more unique of these worlds is Horseye, the home of three alien cultures and renowned throughout the Commonwealth for having the most spectacular river valley anywhere in the known galaxy.

It is both the cultures and the river that has drawn scientists Eitienne and Lyra Redowl to Horseye. Now, after months spent in quarantine, they embark on a voyage to the source of the 12,000 long River Skar, and study it and the peoples living on its banks.

Veterans of exploration and discovery, the Redowls believe they are ready to face anything. But how can you prepare for things like treachery, lies and greed? For a local legend would have it that at the source of the Skar lie a great treasure – and the locals who appear to be willing to help the Redowls in fact plan on finding it for themselves.

Assuming, that is, the treasure is in fact something at can be regarded as offering wealth or power…

Caledonia Skytower reads various short selections of popular stories that she has presented over the last 12 years, including Frank Stockton’s The Lady, or The Tiger, which formed her Seanchai audition piece.

Two identical doors. Behind one is a blushing beauty. Behind the other, a horrible beast. Which will the young man choose, the lady or the tiger?

Ktadhn Vesuvino shares more of his original work – a journey for late summer.

Riding a motorcycle to connect thoughts and actions via snow and flowers.

Harvey Cheyne Jr. an arrogant, spoiled son of a multi-millionaire, is en route to Europe with his parents via luxury liner. As the ship enters the fishing grounds of the Grand Banks, He manages to fall overboard – the result of rushing to the deck in a heavy sea feeling sick from attempting to smoke an illicit cigar.

His fall passes unobserved aboard ship, which passes onward, leaving him to drown. Fortunately, he is rescued by Portuguese fisherman, Manuel. Unable to convince any of the fishermen of his position in life or his father’s wealth, Harvey finds himself forced to earn his passage aboard one of the larger fishing vessels.

At first indignant, Harvey quickly learns it is work – or go hungry. And so he embarks on a new life one which eventually leads him to a surprising realisation.

After three years at Holly Kai, Seanchai Library is moving to pastures new (and larger!). The last sessions at Holly Kai Park will be on Thursday, September 3rd. I’ll have a full update on their new location on or just after that date.