At the start of April 2019 I reviewed the Water Horse Animesh horse – a horse that, unlike Bento horses, is not limited to having to be worn in order to be ridden – as it has its own skeleton, completely independent of an avatar, an Animesh horse can also be rezzed in-world, where it can wander, or ridden in the style of a vehicle, making it perfect for use both when riding, or as region décor.

However, the Water Horse model isn’t the only Animesh horse. Teegle, for example, are currently developing their own horse, which is currently in public beta – and in the interests of comparing the two, I recently picked one up and took it for a test drive. Err, ride.

Currently, the Teegle horse comes in two styles: a paint and a Hanoverian. The former might be seen as more suited to an American style of riding, and the later leaning towards more European riding, but the fact is that as both horses are supplied sans tack, you’re free to decide which you’d like, and then choose your preferred style of tack, or even swap riding tack depending on your mood.

Two HUDs – both of which are still under development at the time of writing – are supplied with each Teegle Animesh horse.

Before riding the horse, make sure any AO you have (scripted or client) is turned off to avoid any conflicts. Then either:

The first option will add the horse to you, with you in the saddle (if attached to the horse); the second will place you in the saddle (if attached) of a rezzed horse. Note that if worn, you’ll need to the manually attach the riding HUD; if the horse is mounted while rezzed in-world, you’ll be asked if you’d like to accept the HUD, which then attaches automatically (note this is a slightly different HUD to the one in your inventory, as it includes the Lead and Follow options for the rezzed horse).

Movement is via the usual WASD / Arrow keys, with W / Up for forward motion, with double-taps advancing through the four speed options. Tapping the Down keys while moving forward will step back down through the riding speeds. When riding the horse from rezzed, the Down arrow will play a nice backwards walking animation.

Passengers can ride with you simply by clicking the horse. The rider can then select who “drives” the horse via a left-click to display the menu, and then the Driver option (rider 1= the avatar in the saddle; rider 2 = the passenger directly behind the rider; rider 3 = rearmost passenger). Who has the reins is indicated via local chat. The same menu option is used to take back control.

Who can directly ride a Teegle Animesh horse when rezzed in-world is also set via the menu: left-click the horse, then Settings > Driver Perm. At the time of writing, the options were limited to Private (owner only) and Public (anyone), but I understand more granular options will be added.

As the Teegle Animesh horse is still in development, it is hard to say what else might be included. However, some of the current additional capabilities include:

Adding Tack and Other Options

Riding tack by Teegle is easy to attach to the horse:

To remove an attached item (e.g the saddle or entire riding tack):

END_OF_DOCUMENT_TOKEN_TO_BE_REPLACED

All other SL viewers in the pipelines remain unchanged:

A set of environmental enhancements allowing the environment (sky, sun, moon, clouds, water settings) to be set region or parcel level, with support for up to 7 days per cycle and sky environments set by altitude. It uses a new set of inventory assets (Sky, Water, Day),  and includes the ability to use custom Sun, Moon and cloud textures. The assets can be stored in inventory and traded through the Marketplace / exchanged with others, and can additionally be used in experiences.

Due to performance issues, the initial implementation of EEP will not include certain atmospherics such as crepuscular rays (“God rays”).

Vir is now looking at adding shape support (or similar) to Animesh, which Vir sees as possibly being approached in a couple of ways:

Which approach should be taken is down to whatever the most common use-case for customising Animesh might be (a likely topic for discussion). Currently, either approach will require additional server / viewer messaging, so Vir is looking at that.

There are also questions on what else might be preferable to add to Animesh (e.g. extending Bakes on Mesh to support Animesh, adding attachments support, etc), and the relative priorities people place against the various options as to any order as to how things might be tackled (would applying shapes be sufficient? Should it be shapes then another requirement, or is there another requirement that should take priority over shape support?).

Attachments are an issue in themselves; as Animesh doesn’t have an associated agent, there are no attachment tables for it to use, making basic attachment to s specified point difficult. Also, avatar attachments are effectively individual linksets applied to a common root – the avatar.

However, as an Animesh object is a single linkset, adding attachment to one object is more akin “merging” the attachment’s linkset into that of the Animesh, making them one continuous linkset. This clearly add complications; for example, how do you identify all the parts of the attachment to remove them when detaching, and how do you ensure they detach as a single object, rather than a coalesced group of unlinked items?.

Exactly how this would work in practice still has to be properly determined, together with an mechanism for handling local position and the attachment’s position and rotation offsets. It is further unclear at present whether this approach might required support from and additional viewer UI element or could be controlled entirely through LSL.

Extending the current avatar baking service to allow wearable textures (skins, tattoos, clothing) to be applied directly to mesh bodies as well as system avatars. This involves viewer and server-side changes, including updating the baking service to support 1024×1024 textures, but does not include normal or specular map support, as these are not part of the existing Bake Service, nor are they recognised as system wearables. Adding materials support may be considered in the future. 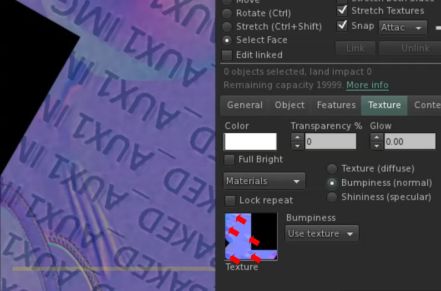 Anchor Linden is dealing with issues related to handling alpha layers in the new baking channels – with some of them not getting correctly baked, and which may need some fixes in the baking process. BUG-226599 is also being looked at; although a feature request, it might actually be the result of an underpinning bug.

Following the April 11th CCUG, Cathy Foil carried out further tests to apply materials to a Bakes of Mesh surface. This involves using a script to take the UUID for one of the new universal bake channels (e.g.BAKED_ AUX1), and pointing it to a normal map (shown in the place holder normal map image “BAKED AUX1 IMG”, right), then wearing a universal wearable that uses the same bake channel. This results in the normal map then being applied to the desired face, as show in the image of the normal map in the Edit floater (arrowed on the right, above). This approach also appeared to allow a layering of normals on a face. However, the method is not currently seen as a recommended approach to materials with BoM, and probably won’t be treated as a supported technique.