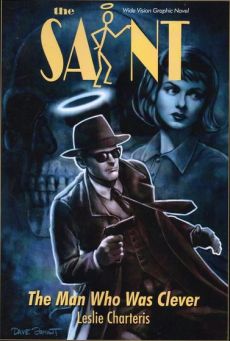 Adventure came to him not so much because he sought it as because he brazenly expected it. He believed that life was full of adventure, and he went forward in full blaze and surge of that believe…

So reads The Man Who Was Clever, billed as the first graphic novel about Simon Templar, aka The Saint, aka The Robin Hood of Crime, as it describes the man himself.

The creation of Leslie Charteris, Templar first arrived in literature in 1928, his career in print spanning almost six decades, with later books and stories being written in collaboration with other writers. Templar’s career in other media started in 1938 with the release of the motion picture The Saint in New York, and in radio in 1940 – with none other than Vincent Price most famously providing him with a voice from 1947 to 1951, on no fewer than three US radio networks.

However, it is probably as personified by the late Sir Roger Moore on television between 1962 and 1969 that Simon Templar is familiar to most. This series actually added to the library of The Saint’s literature, with a number of original scripts for the series – with Charteris’ approval – becoming short stories using his name as the author.

The Man Who Was Clever first appeared in 1930 as a part of the first collection of short stories about The Saint published under the title Enter The Saint. In it, Templar, the man who robs from the evil and heartless rich, and gives to the wronged and deserving poor, entered the world of graphic novels thanks to a story adaptation by Mark Ellis with David Bryant serving as illustrator. It marks the start of a new series of Tea Time adventures for Seanchai Library, with David Abbot, Corwyn Allen, Kayden Oconnell, and Caledonia Skytower.

Gyro Muggins reads Ruth Beebe Hill’s extraordinary novel that is either loved or hated – and has certainly proven controversial since its first publication.

Lyrically written, the story is, at its core, a multi-generational saga follows the lives of two Indian families, members of the Mahto band of the Teton Sioux, before and during their first contact with the white man and his “manifest destiny.” Within its sweeping story, Hill attempted to fashion an epic, Native American version of Alex Haley’s Roots.

Allegedly based in part on writings translated from a Lakota Sioux winter account translated by a First Nation Sioux, the story is certainly cohesive and vivid. For those unfamiliar with the lives and rituals of the Plains Indians of North America, it makes for a fascinating and enlightening read.

However, to some in the Lakota, the book is seen as demeaning and misrepresentative – a fact Hill herself finds baffling. Whilst she fully acknowledges the story is a “documented novel” – a fictional story based on actual events – she also notes that she spent some 20 or more years researching Hanta Yo and carrying out hundreds of interviews with representatives of the Sioux, Kiowa, Omaha, Cheyenne, and Navajo tribes, including allowing them access to her manuscript to verify the historical elements from their standpoint.

Event today, in the year of the 40th anniversary since its first publication, Hanta Yo divides opinions. So why not settle down with Gyro to hear the tale first hand?

Faerie Maven-Pralou reads Elizabeth Spires’ inspired tale designed to introduce young readers to the works of Emily Dickenson. Regarded as one of America’s most prolific and significant poets of the 19th Century, Dickenson’s work only gained public recognition following her death, as she was very private about her writing. 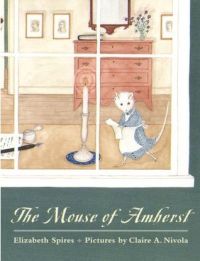 In Spires’ tale, a mouse finds s a place to live behind the wainscoting of Emily Dickinson’s bedroom. however, Ms. Dickenson’s constant writing at her desk becomes a source of fascination for her new “lodger”. Venturing forth when it is safe, the mouse – Emmaline – make her way to the writing desk and discovers Emily’s poetry.

Inspired by what she reads, Emmaline writes a poem of her own, leaving it on Emily’s desk. On finding it, Emily replies, and thus a poetic correspondence between the two is established.

Featuring eight of Dickenson’s actual poems, together with seven “replies” from Emmaline, Elizabeth Spires gently draws young readers through a charming story into the power of poetry to express our deepest feelings, and perhaps start them writing poems of their own. 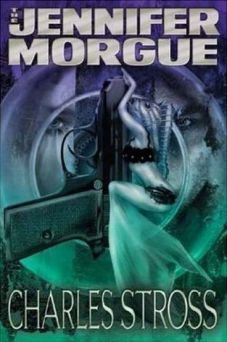 Corwyn Allen reads the second volume in the Laundry Files by Charles Stross.

Bob Howard is an IT expert and occasional field agent for the Laundry, the branch of Her Majesty’s Secret Service that deals with occult threats. In this second outing, Bob Howard finds himself dragged into the machinations and conspiracies of megalomaniac multi-billionaire Ellis Billington, The Black Chamber and The Laundry…

Dressed in a tuxedo (what else for a globe-trotting British Secret Agent?) and sent to the Caribbean, Bob must infiltrate Billington’s inner circle via his luxurious yacht. His mission? Prevent the Billington from violating a treaty that will bring down the wrath of an ancient underwater race upon humanity’s head.

Offering a wonderful pastiche on both the world of James Bond and a wonderful mimicking of Ian Fleming’s style of writing, Stross produces a novel that also evokes Lovecraftian overtones that is delightfully entertaining to read. In true Bond style, Bob is (reluctantly) partnered with an American agent – in this case a stunningly beautiful woman who also just happens to be a soul-sucking succubus from another dimension. Which, being the case, marks Bob’s mission somewhat differently to those of Bond: not only must he stop the bad guys and come through this at best shaken, he must totally avoid being stirred towards getting the girl…

First published in 1903, The Call of the Wild is regarded as Jack London’s masterpiece.

Based on London’s experiences as a gold prospector in the Canadian wilderness and his ideas about nature and the struggle for existence, The Call of the Wild is a tale about unbreakable spirit and the fight for survival in the frozen Alaskan Klondike.