The 2018 Second Life Hair Fair is currently open, and runs through until Sunday, October 7th, 2018. The event features around 70 hair designers, and as with previous years, is being run to raise money for Wigs for Kids.

Spread across six regions, four of which – Brunette, Noirette, Redhead and Blonde – contain the stores of participating vendors, while the remaining two, Foils and Streaks, are designed for those who prefer to shop by camming rather than walking (and are thus referred to as the Cam Sims).

The four shopping regions are wisely lightly decorated in order to minimise viewer-side lag that might otherwise be created by having a significant amount of extra object and texture rendering.  Stores are easily identified by the large signs located on the brick paths leading around the regions. These are laid out in such as way that wherever you teleport into a Hair Fair region, by following the red brick path in one direction and keeping to that direction, you’ll eventually visit  every store before returning to the point at which you arrived.

The full list of participating merchants can be found on the Hair Fair website together with SLurls. However, do note that direct teleporting is limited to the landing points in each region; to use the store SLurls, copy them into local chat once at the event, then right-click on the display link to display an in-world beacon and arrow you can use to navigate to your desired store. 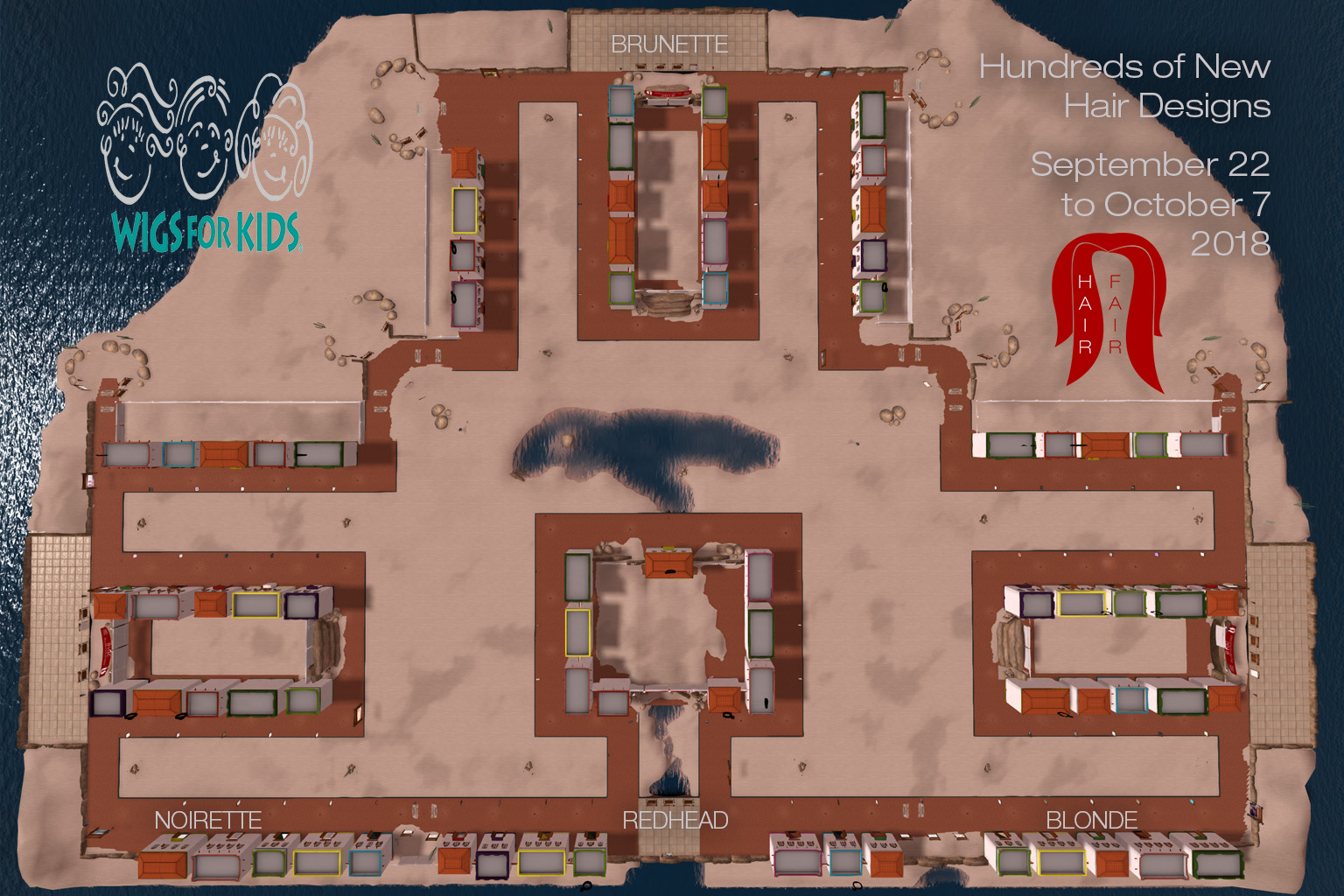 All items purchased at this event will have a minimum of 15% of their price donated to Wigs for Kids, and for the men, stores selling male / unisex hair are denoted by a large ♂ symbol floating over their roofs. When purchasing, always check to ensure items are received; should you encounter problems, left-click the vendor / pack from which you made a purchase, this will trigger an automatic redelivery. However, do note that the list of purchasers held by each vendor / pack is only so long, so it is essential you check as soon as possible after purchase in order to avoid the vendor / pack dropping your name.

Those wishing to avoid spending too much time in the event regions can join the Hair Fair Demo group (no charge for joining). Notices with demos posted by participating merchants within the group allow styles to be tried prior to visiting, so that desired hair can be identified and the SLurls used to make visits to the required stores. Note that this is the only in-world group associated with the Hair Fair.

If by chance you don’t find hair to suit your needs, there are numerous donation kiosks located along the paths of the regions, so you can always make a L$ donation directly.  There are also Bandana Booths to be found, which also give 100% of donations to the cause, and from which you can obtain Hair Fair Hares.

About Wigs for Kids

For more than thirty years Wigs for Kids has been providing hair replacement systems and support for children who have lost their hair due to chemotherapy, radiation therapy, Alopecia, Trichotillomania, burns and other medical issues at no cost to children or their families. The effects of hair loss go deeper than just a change in a child’s outward appearance. Hair loss can erode a child’s self-confidence and limit them from experiencing life the way children should. With an injured self-image, a child’s attitude toward treatment and their physical response to it can be negatively affected also.

Wigs for Kids helps children suffering with hair loss look themselves and live their lives. Families are never charged for the hair replacements provided for their children; Wigs for Kids rely completely on both the donation of hair and / or money to help meet their goals.

Read more about Wigs for Kids mission, and discover how hair can be donated.

Update, February 2020: Florence Bay has closed. SLurls have therefore been removed from this article. However, Florence at Low Tide is now open – see Witnessing Florence at low tide in Second Life for more.

Florence Bay is a homestead region held by Gnaaah Xeltentat and Tomaso Franizzi, with landscaping by Minnie Blanco (Minnie Atlass). Minnie both runs and landscapes the Soul 2 Soul region (some of which you can read about here, and here); given my fondness for hers work, I was curious to take a look at Florence Bay, so we recently hopped over to explore.

The region is listed by Gnaaah and Tomaso as “private, but please wander and enjoy”. Two large houses are located on the island; as these are private residences for both Tomaso and Gnaaah, people are asked to respect their privacy and consider both properties as off limits, although there are no security systems in place.

The setting is suggestive of somewhere in northern latitudes, the tall off-region peaks on two sides suggesting this is a rugged upthrust of rock just off a stretch of untamed coastline, caught under a cold, wintry sky. Fir trees and scrub grass are the dominant flora on this hunched landscape, their presence and the sound of the wind whistling its way in off the sea further enhancing the sense that this is somewhere well north of the Topic of Cancer.

At the time of our visit, there was no enforced landing point for the region, so for this article I’ve arbitrarily selected a point in the south-east corner of the region, as it seems a logical place to start explorations. A narrow ribbon of shale beach curls around a low-lying promontory here, the home to a copse of tall firs and an old chapel. The latter appears to have been converted to a place for general meditation or reflection, rather than being a place a worship, the altar replaced by a warming fireplace. For those with a taste for adventure, a raft lies among the reeds of the shallows close by. This again offers a place of rest and shelter, although the manner in which its makeshift sail is catching the wind suggests it is eager to break free of whatever ropes or chains are holding it in place…

The little promontory curls around to connect to the bulk of the landscape, climbing as it does so. Here rocky paths can be found, one running west, the other north, each leading to the private residences. It is also here that things get a little confusing with exploring.

Beyond the western house is a little café and, sitting behind it on a second headland, a shed housing – rather incongruously, given the overall rugged setting – a car undergoing repair.  However, while the café would appear to be a public space, the only way to reach it is by walking directly in front of or around one of the two private residences, potentially impinging your presence, even in passing, on the property. It thus becomes a little confusing as to whether the café is a public space or not.

Similarly, beyond the headland with the garage, the land falls away to another low-lying finger of rock and shale beach, complete with a set of piers reaching out into the deep cut of the western bay. Chairs sit on the piers, and a rowing boat with sitting poses is moored alongside, together with a fishing boat, all of which suggests this is also a public space; but again, to reach it requires a degree of trespass through the garden of the private house.

This pier looks both eastwards and back inland to where the second of the two houses sits high above the frigid water atop a shoulder of rock, and north to were a narrow cleft splits the land, spanned by a wooden bridge. This can be reached by following the path from the my offering arrival point westwards and up over the low hump of a hill, before turning right and away from the first house and its gardens.

This route passes over another grey beach of shale curing within the large bay before rising to the western headland, offering a view down to a small, and previously hidden cottage sitting right on the coast, and access to a path running up to the bridge and the small knuckle of rock beyond – the home of firs trees and a bear with her cub.

There are odd little issues that might be found when travelling across the region: the rocks used to mark the paths can be seen hovering over the landscape in places, while there were a few points where we either bounced off of flora that wasn’t phantom or fell through rocks that unexpectedly were. But when taken in total, there is no denying the atmosphere exuded by Florence Bay, accentuated nicely by the region’s soundscape, and the fact that it lends itself as a perfect location for photography.