The notes in this update are taken from the abbreviated TPV Developer meeting held on Friday, January 13th, 2017. The video of that meeting is embedded at the end of this update. My thanks as always to North for recording and providing it.

The Maintenance RC viewer was updated to version 5.0.1.322791 on Thursday, January 12th. Otherwise the pipeline remains unchanged from part 1 of this week’s update. [34:20] this will likely be the next viewer to be promoted to release status.

[03:07] It is anticipated that the 64-bit official viewer, version 5.1.0.501863 at the time of writing, will remain in the project cycle for some time. An update to it is anticipated in week #3 (week commencing Monday, January 16th, 2017). Currently, the project viewer isn’t being used by many, and the Lab hopes this number will pick up so that a little more feedback can be obtained.

Points of note with the 64-bit viewer and 64-bit plans:

For more on Linux, see below.

[07.18] Updates to Voice should be appearing in a viewer in the next 2(ish) weeks. This will include a new SL Voice plug-in from Vivox which includes a new Opus codec, as well and bug and exploit fixes.

Linux and the Viewer

[10:08] Currently, the Lab have not carried out any work on a 64-bit version of the viewer on Linux. However, thought is being given on how to move forward with Linux, and it is hoped that the Lab will have some ideas to put to the TPV / open-source community by the next TPV Developer meeting. It is also hoped that by that time, the Lab will have started work on a 64-bit Linux version of the viewer.

The following are covered in brief. please fer to the video for specifics.

[09:14] Jonathan Yap, who has worked on various code contributions for the viewer including, most recently, graphics presets, is working on a new project, which appears to be updating the viewer’s camera presets.

[16:45-28:09] A lengthy discussion takes place on music autoplay within the official viewer, and whether or not it should be enabled by default.

(Note, this discussion also drags on between 29:45-33:50, after the above agreement being reached.)

[28:45] In a similar vein, a request was made to disable click-to-walk, as it has been observed that new users get confused when they find their avatar apparently moving when they haven’t touched their keyboard.  A JIRA on this has been requested.

[34:59] Group chat lag become more noticeable over the holiday period. However, the Lab ran a restart of the back-end group chat servers, and this appeared to resolve the majority of issues. If specific groups are still experiencing issues, JIRAs are requested.

[36:49] There are reports that the problem of group notices not always getting through is getting worse. So people don’t get the notice, others get them twice, etc. A JIRA, BUG-40824, has been raised on issues with off-line receipts of group notices as well.

As an aside to this, a fix is in progress t ensure that off-line messages, which may not always get delivered at the next log-in, will be delivered.

[42:29-end-of-meeting] The end of the meeting centres on a convoluted discussion on the environment map used for the sky, shiny / glossiness, etc. In sort, there is a request for region holders / creators to be able to replace the environment map with a texture of their own choosing. On the plus side, among other things, this could allow things like easier simulation of reflections using projectors. on the negative side, again among other things, it could break a lot of existing content.

Changes to the environment map, providing they can be shown to have specific benefits and do not break existing content, have not been ruled out. However, a specific proposal is really required.

The Hell’s Heaven 2.0 – click any image for full size

“Stay awhile,” Snoob (SnoobJohnson) and his partner, Mila (Mila Maesar) say in greeting to visitors to their homestead region, The Hell’s Heaven 2.0. “Let  this world  refresh your soul and
melt your worries away …  Explore this cloudy world of changing scenery and enjoy your stay!”

It’s a warm invitation, and there is much to enjoy within the region, which has been beautifully created by Snoob, with touches inspired by Mila to offer photographers and explorers alike with a visual treat – an anyone who has looked at the Flickr group for the region will only be too aware.

This is a land of two distinct parts. To the west sit low-lying marshlands, ankle-deep in water and carpeted in long reeds and grasses through which a water-hugging mist drifts.  Scattered over this lay dilapidated shacks and cabins, their floors flooded and wooden walls slowly rotting, submerged wooden walkways running from nowhere to nowhere outside. Wrecks of cars and pick-ups complete the scenery, together with a couple of rowing boats and the rusting body of an old airboat.

To the east, the land rises abruptly in a series of rocky crags, high ridges and flat-topped plateaus, cutting the land between them into deep gorges, one connected to the next, through which the marshy waters drift and aged trees stand, trunks bent and branches hanging low, like old men needing a cane for support as they watch the passing of time and the world.

Waterlogged paths wind through these grey canyons, leading the way to an old, broken railway line emerging from a boarded tunnel. Overhead, clouds drift across a sky deepening with dusk, their shapes a mix of grey and softly burnished bronze. Between sky and ground, strung across one of the gorges, sits an old chair lift, all but one of the wooden seats fading in the sun, the exception dangling beacon-red beneath the uppermost stretch of taut cable. Do be aware when wandering the canyons, that a private residence lies beyond them in the north-east corner of the lane – please respect privacy there.

A hinterland of rock, reeds, and water, there is a feeling this place has been long abandoned; the cars are rusting, an old fuel pipe and valve leaking oil into the water, adding the glossy touch of alien colours to its surface here and there. But while abandoned, this land is not deserted. Egrets and herons perch here and there, eyes alert for fish – so the waters aren’t that contaminated – while crocodiles rest among the reeds, perhaps also waiting for unwary prey to come a little too close.

The Hell’s Heaven 2.0 – the name a reminder of Snoob’s original The Hell’s Heaven – is very much a place of peace and serenity, with the feeling of decade and passing time adding to its beauty, and not necessarily in a melancholy way. There is a sense of romance to the region, giving it the feel of a setting from an unwritten novel.

Be sure to pay a visit and write your own chapter. 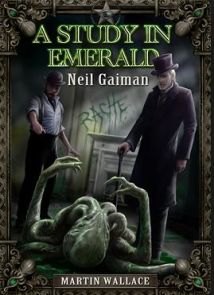 Alluding to both the Sherlock Holmes canon and the Old Ones of the Cthulhu Mythos, this Hugo Award-winning short story by Neil Gaiman will delight fans of Sir Arthur Conan Doyle, H. P. Lovecraft, and of course, Gaiman.

A Study in Emerald draws listeners in through carefully revealed details as a consulting detective and his narrator friend solve the mystery of a murdered German noble. But with its subtle allusions and surprise ending, this mystery hints that the real fun in solving this case lies in imagining all the details that Gaiman doesn’t reveal, and challenges listeners to be detectives themselves.

Gyro Muggins delves into this short story by Robert Heinlein. In it, the master of science-fiction takes a turn into the remain of fantasy, complete with a touch of politics allegedly born out of the dirty tricks Heinlein witnessed in his failed 1938 attempt to gain election to the California State Assembly.

First published in Weird Tales in 1949, Our Fair City looks at corruption among cops and politicians within a small city, centred on an attempt by a newspaper columnist with a penchant for digging up the dirt on people and a parking lot attendant, to clean the place up. Their plan to do so?

Climbing on to a Roman Dragon Rustling ship by mistake in your first ‘Boarding an Enemy Ship’ lesson is bad enough. But to then discover that Alvin the Treacherous is also on board proves to Hiccup he couldn’t have been more wrong, especially when he steals his copy of How to Speak Dragonese. Can Hiccup save the dragons and the day?

Caledonia Skytower reads the third How To Train Your Dragon book by Cressida Cowell. 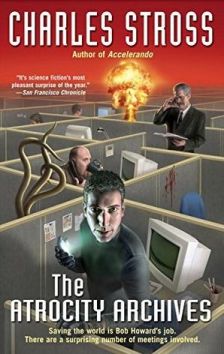 Join Corwyn Allen as he delves in The Atrocity Archives, the first volume of the Laundry Files, by Charles Stross.