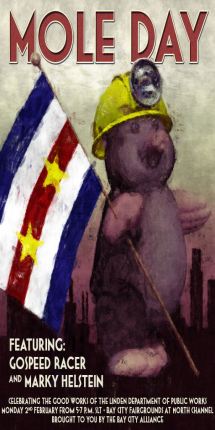 First held in 2010, Mole Day honours the members of the Linden Department of Public Works (LDPW), affectionately known as the “moles”, who are responsible for the construction of all of the Mainland infrastructure in Second Life – the roads, railways, waterways, and so on.

Lead by Michael Linden, and with involvement from other members of the Linden team, the moles are drawn from SL’s resident population, and comprise builders, scripters, artists and more. They take their nickname from the fact that on joining the programme, they gain a LDPW account with the last name of “Mole”, which commemorates a piece of graffiti found scrawled on buildings long ago: “Beware of the mole people!”.

The moles have also been responsible for some of the larger mainland development projects, such as creating many of the more famous sights in Nautilus and wells as undertaking initial development of Zindra, the Adult continent. The Moles also develop Linden Homes regions on behalf of the Lab, including all of the parks and places to discover within them. However, their very first project was developing Bay City itself – hence the City’s annual celebration honouring them.

This year’s Mole Day celebrations will kick-off at 17:00 SLT on Monday, February 2nd, 2015, with entertainment featuring GoSpeed Racer of KONA Radio and, from 18:00 SLT, Marky Helstein.

With thanks to Marianne McCann.