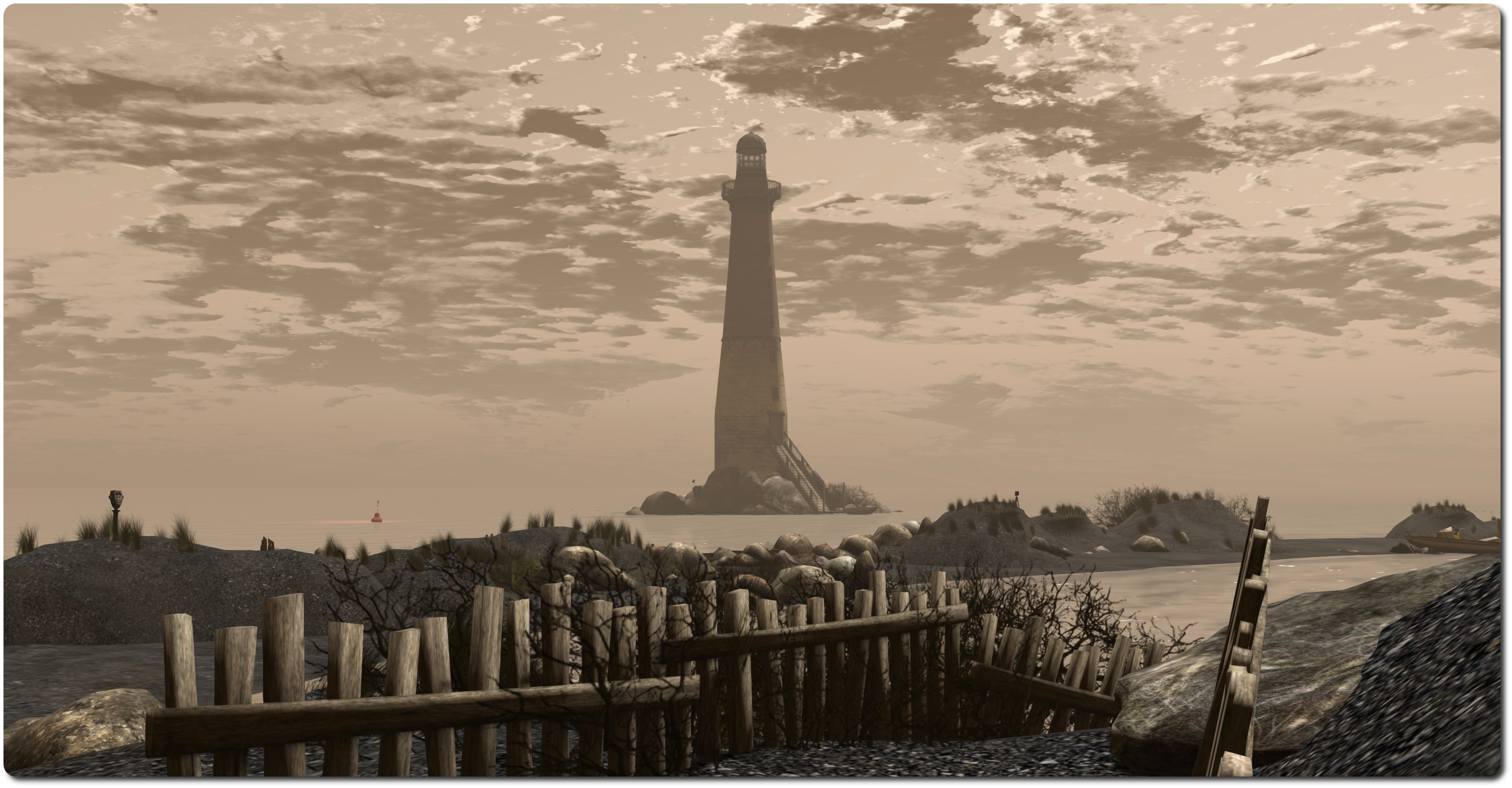 The Colder Water, located on the homestead region of Daydreams, is without a doubt one of the most atmospheric and evocative regions I’ve visited.  Both minimalist in one direction, yet rich in content and imagery in another, Jordan Giant’s design has an immersive attractiveness that is quite breathtaking.

A curved island, what might be all that’s left of a long-extinct and drowned volcano, sits low in the sea, black gravel beach curving gently between two uprisings, each with its own lighthouse. The slender form of a third rises from rocks a little offshore, forming a triumvirate of silent watchers. 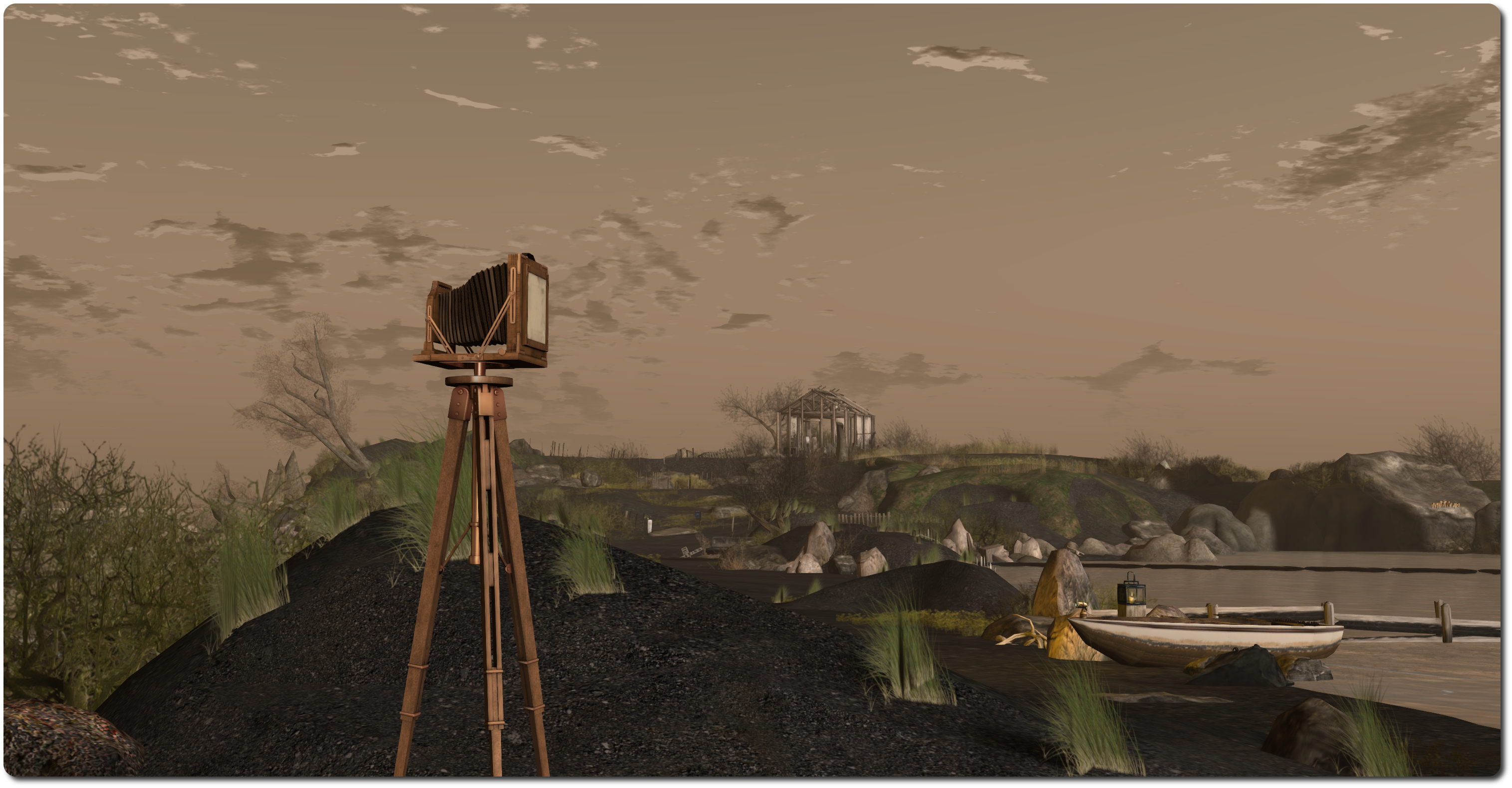 The island, largely bare of foliage other than moss, tough grass and skeletal trees, shows odd signs of former habitation. A railway track cuts across the narrow neck beneath the western uplands, running out into the shallows on either side. A path from here leads up through lines of old fencing to an old shed or wood-framed house sitting in disrepair on a low rocky plateau, the rounded flank of a lighthouse nearby.

There is a feeling of quiet age here; the lighthouses all stand deserted, two with lights extinguished and the third rudely decapitated, iron dome almost lost amidst the rocks at its feet. In the grey waters, buoys flash a warning in place of the sweeping lights from the brick-built towers, and even these appear to be uncared for; one has broken from its anchor chain to be carried among the rocks by the flow of the tide. 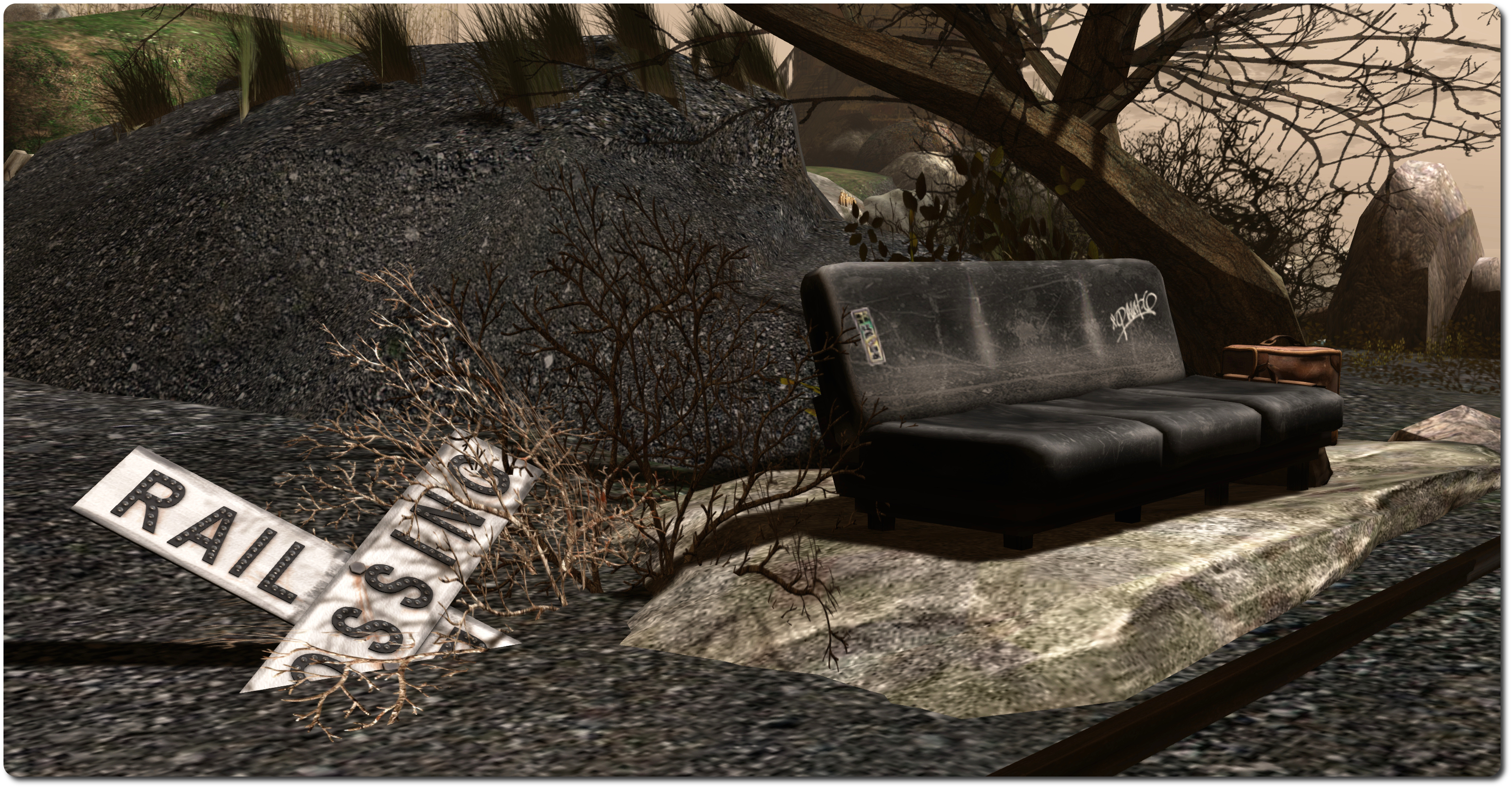 There is a haunting beauty to this island that seeps into the mind; a quiet voice encouraging the visitor to say, or those who have departed to return once more. There is an enigmatic feel to this place as well; the volcanic shores suggestive of an otherworldy place, a sensation enhanced by the jellyfish floating overhead.

But above all, this is a place which speaks of tranquility within its suggestion of age and distance. As it speaks to the mind, encouraging one to to stay, so to does it soothe the soul. The balance here is perfect, and further enhanced by the selected tracks of the audio stream, which is an absolute must listen for visitors. Also – make sure you view the region with the default windlight (I’ve used alternatives in some of the images on this page). 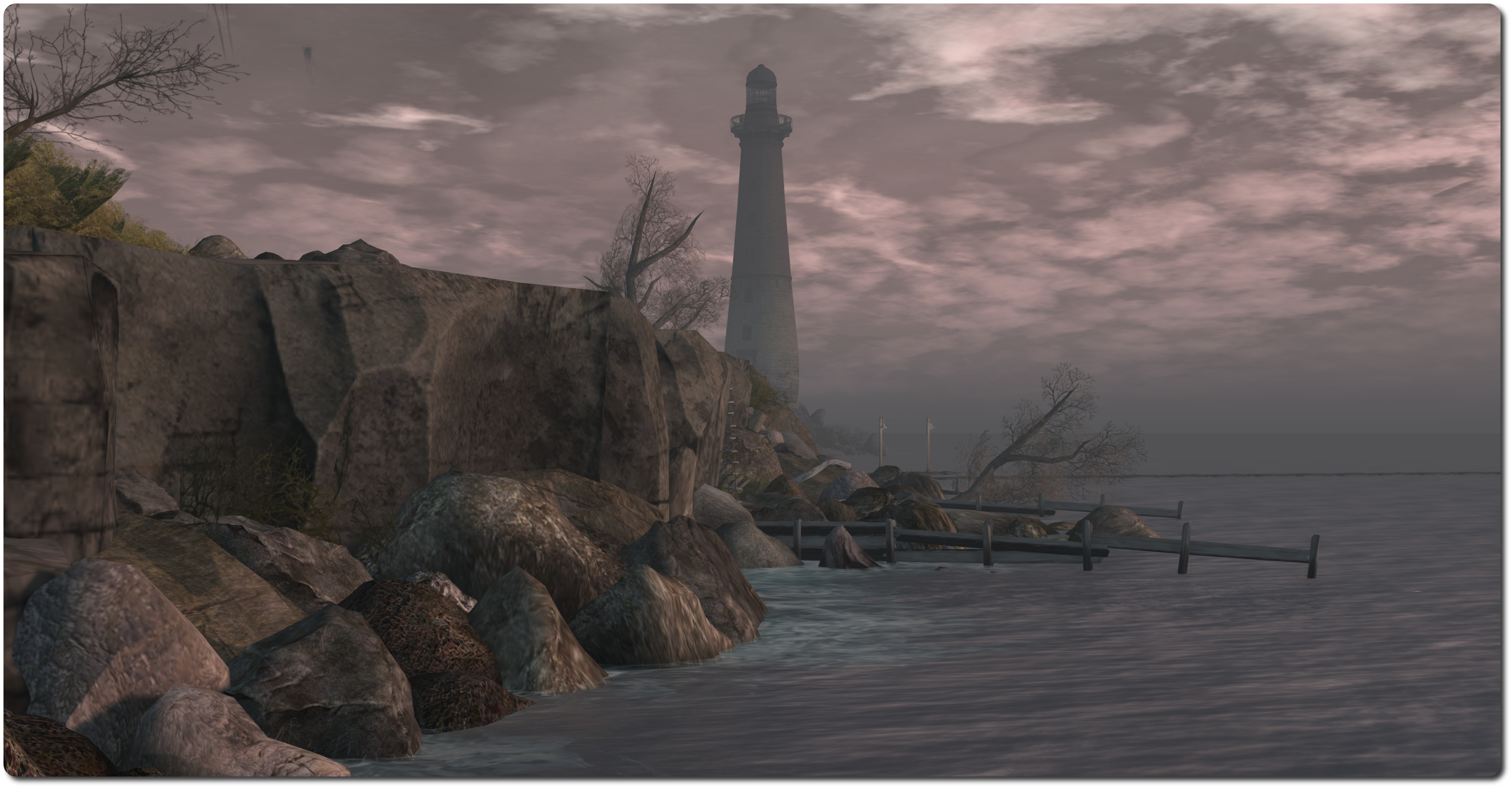 Red lights blink warning
Where cyclopean eyes once roamed.
Whilst on bare rocks, pale candles
Keep a vigil of their own. 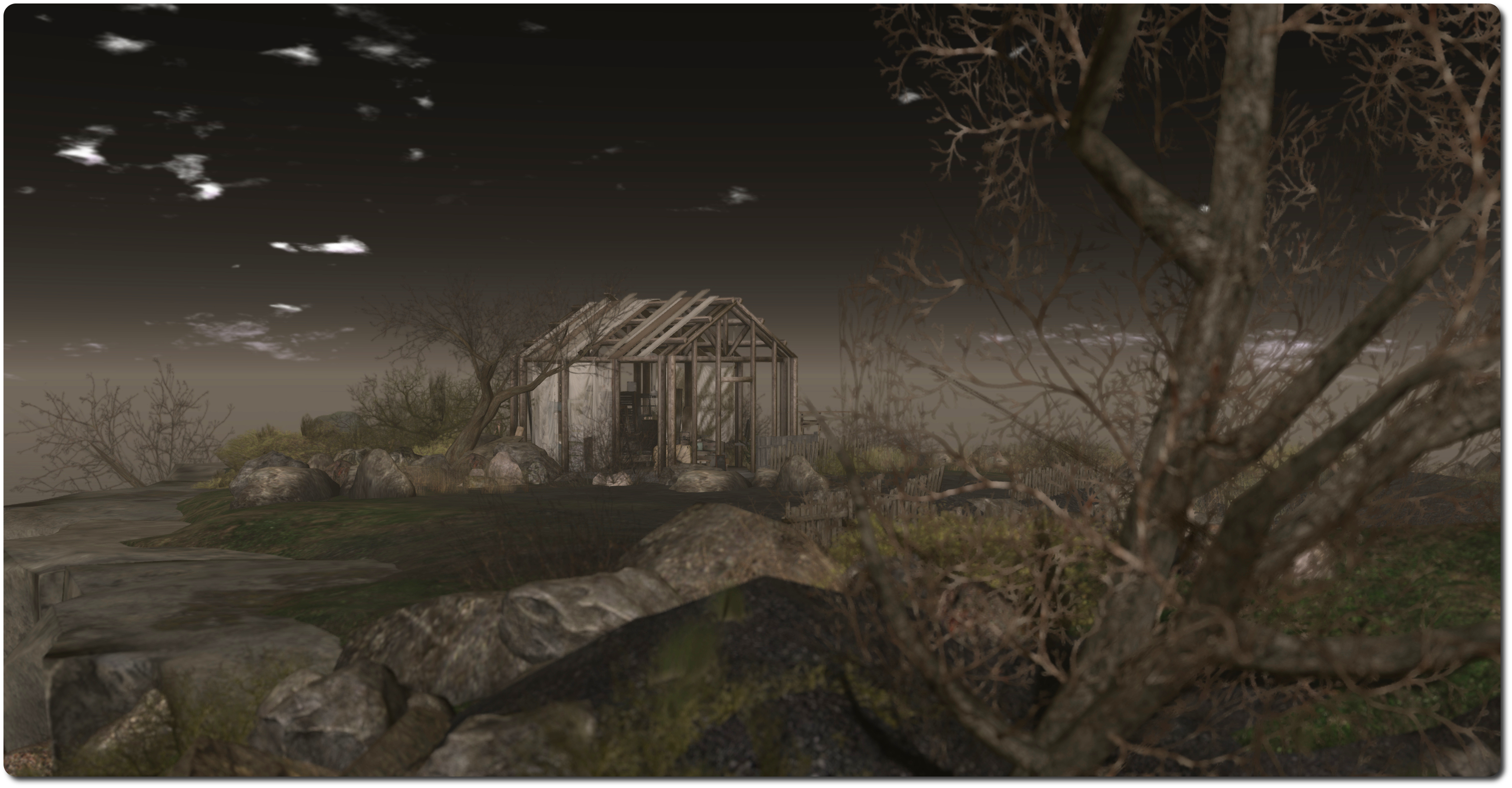 The arrowed headland
Has long gales withstood,
And offers comfort
Under shuttered wood.

Curled stony tail
Sweeps from the arrow’s head.
To bridge-reached door
The traveller is led. 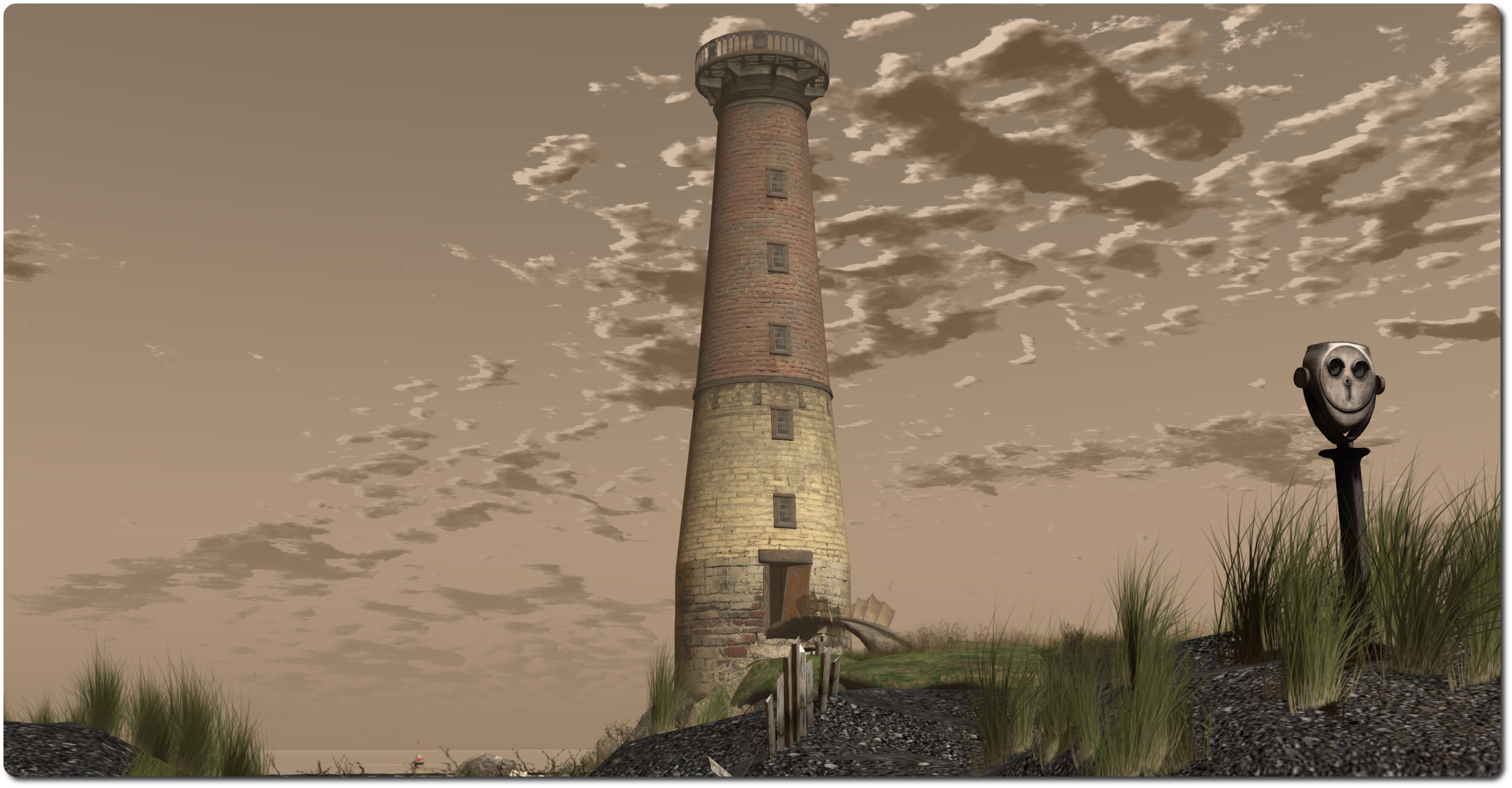 Climb the twisting circle
To high wrought iron’d tip.
And find the telescope, upward turned
To watch the stars, not passing ships.

with thanks to Caitlin Tobias for the pointer.

2 thoughts on “Daydreams of lighthouses three”