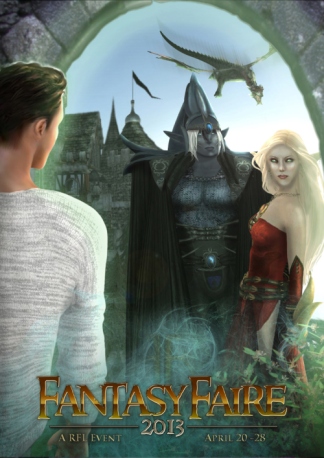 We’re just a week away from the start of Fantasy Faire 2013. The regions have been delivered, the themes set, and build ing underway.

This year will see a total of eight themed regions for the Faire, all designed by some of the leading creative minds in Second Life, with the Fairelands Junction making up the ninth region, and all of them located alongside The American Cancer Society’s home region.

It’s still early days in the builds, but if last year is anything to go by, this year will again be spectacular. While I really don’t like to sound as if I have favourites, I have to admit that I’m really looking forward to seeing Elicio Ember’s work once again – his work always leaves me both breathless and enchanted; and I’m also really looking for to seeing Sharni Azalee and Marcus Inkpen’s Lotus Valley Dream. anyone who has ever visited The Looking Glass will know why!

The eight themed regions and their designers are:

Crimson Fields by Laufey Markstein: The field of Oblivion will be built as an homage to Stephen King’s “Dark Tower” series, and will feature a central, gothic and ominous dark tower, in a wide open field of overgrown thorns and scarlet red roses. The stores builds will hint at the long-gone remains of similar gothic structures, roof-less, with time-eroded stone walls entwined in overgrown rose thorns.

The DragonSpire by Khyle Sion: A barren land of stone and crystal, hiding its lavish secrets beneath the shell of the earth. The native Goblins, Drow, Dwarves and Nixies reside in the fruitful tunnels, lorded over by a Dragon and his horde. Veined with phosphorescent ores, freshwater streams and exotic fungi, these deep caverns hold remnants of a lost civilization.

Evensong Woods by Searlait Nitschke: Resting in the treetops of is the elven enclave of Yuale Nura. Bathed in moonlight, the homes glow warm in the deep blues and purples of a winter’s night. A light dusting of snow gives the impression of undisturbed slumber, but perhaps all is not as quiet as first impressions suggest.

Lotus Valley Dream by Marcus Inkpen and Sharni Azalee: The spirit world touches the material plane in this garden of bonsai trees and waterfalls surrounding an ancient pagoda.  With such mystical elegance everywhere you look, this is a place to still your mind and connect with the magic within.

Lumenaria by Kayle Matzerath: A vast City with lots of colorful houses, shops and a huge castle where the main streets meet. A tribute to the sun and all the golden harmony it brings, the city of Lumenaria is a beacon of hope to any who seek refuge from the dark.

Magnificat by Alia Baroque: The Relay Royales kindly invite you to their summer palace and gardens for a week of diversions, plays, games and leisure to celebrate life and magnify our souls.

Ravenshard by Mayah Parx: Where beauty has lost its perfection to a collection of twisted shards reflecting the wondrously literalistic minds of Burton, Pratchett, and Dahl. The lands will be distinct. The shops anything but square, and some may even have feet! Be warned. It’s funky, it’s fun, and it’s anything but straight!

Titans Hollow by Elicio Ember: The cliff city of Caras Calar dangles high above ground, suspended from the fickle rock formations. The Structures are made of a filigree of crystal, wood and metal, and hung with gigantic chains from the columnar cliffs giving the appearance from below of huge floating lanterns. The sunken valley over which the city hangs is forested with strange vegetation and irrigated from waterfalls plunging from the sheer cliffs. Legend has it a battle between ancient gods created this strange scenery.

Fantasy Faire kicks-off on April 20th and runs through until April 28th. I’ll hopefully be previewing the regions ahead of the opening. In the meantime, and to whet appetites even more, here’s a superb teaser from the lens of Draxtor Despres!