The account belonging to zFire Xue, creator of RedZone, together with at least one of his alts, “theBoris Gothly”, has gone from Second Life.

So to have the contents of zFire’s store. The news came at around midnight, UK time with posts appearing both in the ever-Epic SLU Thread and people Tweeting on the matter as well. 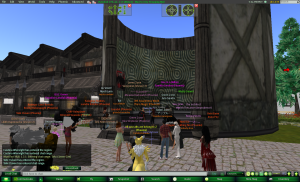 As the news spread, people started heading for the sim where zFire had his shop – and sure enough, the place was empty.

So – is this a cause for celebration? Is the great hoo-haw over and done with?

Sure, there is some reason to celebrate; RedZone has been the focus of a lot of effort, and deserves a moment of celebration; but the fact remains that at the time of writing:

That the product is still on the Marketplace could be down to nothing more than a delay in getting things sorted over at LL. That those associated with him have not gone could be down to just that – they are associated with him and his device, rather than clearly and unequivocally part and parcel of its creation or a part of selling it directly in-world or via the Marketplace (where zFire Xue used his “TheBoris Gothly” alt). That RedZone devices are still appear to be functioning in-world is again a little confusing: unless purging them from the LL servers is taking time as well.

Assuming that zFire has gone, and that RedZone is to be removed from the Grid and the Marketplace, than there is cause for celebration to a point. However, the media exploit still exists, there are other devices still out there, and so there is still more work to be done.

A further quick tour of sims known to be using / hiding RedZone showed that none of them caused a media filter alert of any kind that pointed towards the RedZone URL, or anything of suspicious concern.

Elsewhere it is reported that RedZone devices have had scripts pulled from them. Given that RedZone users were previously instructed by zFire to move the scripts from his own device to prims of their own making, this would seem entirely logical: zapping the scripts would be more effective that simply pulling devices tagged with zFire Xue as the creator.

zFire Zue himself went on the warpath prior to his ban from SL (the interview took place on the Saturday prior to him being banned, but was published – ironically – on the day of his ban), and indicated a potential link between himself and the Knights of Mars, a vigilante group that can allegedly  – and for a fee – get any user banned from SL. Given his companions are still involved in world, some are speculating on whether this matter has entirely closed with regards to RedZone.