Update: Dox, the region on which these builds were hosted appears to have been closed or renamed / relocated. SLurls in this article have therefore been removed.

The main landing point remains unchanged, delivering visitors to the subway entrance from which the sky build takes its name. This leads up to the same street level, with its tall buildings and side alleys and roads, but whereas the tunnel at the far end of the road once ended in a blank wall, it now provides access to the extension to the sky build.

Here, laid out around a grid of narrow roads are further buildings, including the Tokyo South Gallery, a small carnival area (with a tunnel linking to a temple on its far side, an apartment building and surface railway station. As with the original build, the attention to detail is excellent, complete with an atmospheric sound scape, with the outlying building shells giving a further sense of depth.

However, it is on the ground level and reached via a separate LM, that the village of Umi is to be found, hugging the coast of a small island (so far as I could tell, there was not TP connections between ground and sky). This is where the city can be left behind and visitors can explore the beauty of a coastal setting.

The village is a curious and oddly attractive design. A sweep of buildings are nestled under the steep slopes of the island, partially sheltered by trees and rich foliage. These face another arc of wooden and cement buildings standing on what might have once been a sand bar or a sweep of rocks, but which is now clearly a man-made breakwater.

Examination of the houses on the breakwater will quickly reveal they are perhaps a little unusual. Their lower floors are open to the sea on one side, offering moorings and work spaces for small boats, although some have been decked out to provide extra accommodation space, perhaps to offset the somewhat compact – some might say cramped – living spaces of their upper floors. Be aware that four of them – the cement-faced units – are available as private residences.

To the west of the village are working wharves and a warehouse. Fishing boats are tied-up alongside, possibly waiting for the next tide and nets are set out to dry. To the east of the island is a fuelling station, it and the wharves neatly bracketing the village. Alongside the fuelling station is a pedal boat, if you’re careful you can ride own around the island – but take care getting off the boat, any attempt to double-click TP to land will bounce you back up the the main landing point in the sky.

When we first visited Tokyo Street Subway Entrance, we found it to be engaging, detailed, beautifully modelled and presented. That is still the case now – although I admit to finding the Tokyo Street South extension a little too hemmed in and claustrophobic in places. It does, however, provide an interesting contrast with the ground level village setting, which is eye-catching, taken together. they both sit as a visual reminder of the different faces of Japan.

The one major complaint that might be levelled at the region is that of performance; there is a lot packed into it, and depending on local settings ant the use of things like shadows, a viewer and computer can take a hit and end up struggling. So, be prepared to make some adjustments to your viewer, should this prove to be the case. This said, for those with the patience, the region is worth a visit, and offers very different opportunities for photography within the ground and sky builds.

With thanks to AJ and Shakespeare.

As voted for by Seanchai fans, followers and listeners. This week: The Adventure of the Dying Detective, from His Last Bow.

A 1917 anthology of previously published Sherlock Holmes stories by Sir Arthur Conan Doyle, His Last Bow originally comprised seven stories published byThe Strand Magazine between 1908 and 1917, but an eighth was added to later editions. The Adventure of the Dying Detective is the fifth story in the collection.

Sherlock Holmes is dying. That is the shocking discovery Doctor John Watson makes on being called to 221B Baker Street. The Great Detective has apparently contracted a contagious and rare Asian disease while on a case in Rotherhithe. Mrs. Watson confirms Holmes has not eaten or taken a drink in three days.

Wanting to assist his friend, Watson finds himself forced to wait – the contagious nature of Homes’ illness preventing him from carrying out an examination – until six o’clock that evening, when Holmes reveals the name of the one man who can save him, one Culverton Smith. Unfortunately, Smith may not be predisposed to lending assistance, as he is not a doctor, but a man Holmes once implicated in a murder.

Before Watson departs to bring the man to Baker Street, Holmes makes a mysterious request: once he has secured Smith’s agreement to come to Holmes, Watson ensures he returns to Baker Street quite independently of Smith. Confused, but determined to help his dying friend, Watson sets out on his mission …

Have you heard? Willie Wonka is releasing five golden tickets in candy bars! Charlie Bucket may have a chance to find one as Caledonia Skytower presents Roald Dahl’s classic, live on stream! 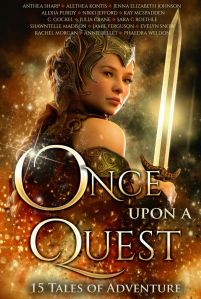 Published in February 2018, Once Upon A Quest is an anthology of 15 fairytales with a twist, their inspiration ranging from The Ugly Duckling to Snow White, and everything in between (including trips to Camelot and Oz). Here, Shandon Loring reads Fear of Falling by Shawntelle Madison.

The sunset-tinged earth was coming at me, and there was nothing I could do, but I refused to die head-first. I twisted my torso in time. First, my right leg hit a narrow cliff. Crunch. Pain seized my right limb and snatched my breath. Clouded my vision in red. Rocks, snow, and branches plummeted past me. I was falling faster and faster.

I reached out with my claws—only finding the open air—even my smaller, gold-tipped wings, which should have captured the air and lifted me toward the eternal heavens, did nothing. Up here, the air was frigid and thin—only a griffin with strong wings could take flight.

The end was coming before I’d experienced a beginning.

Cast from her griffin’s nest, Ireti is forced into the cruel world of the ground-walkers below. Before she can fly, Ireti must find the strength to walk, and the key to acceptance lies in an undiscovered place—between two worlds.

Tuesday, March 12th 19:00: Poets and Bards, the legacy of Storytelling

Wednesday, March 13th 19:00: Selections from Wind on the Willows