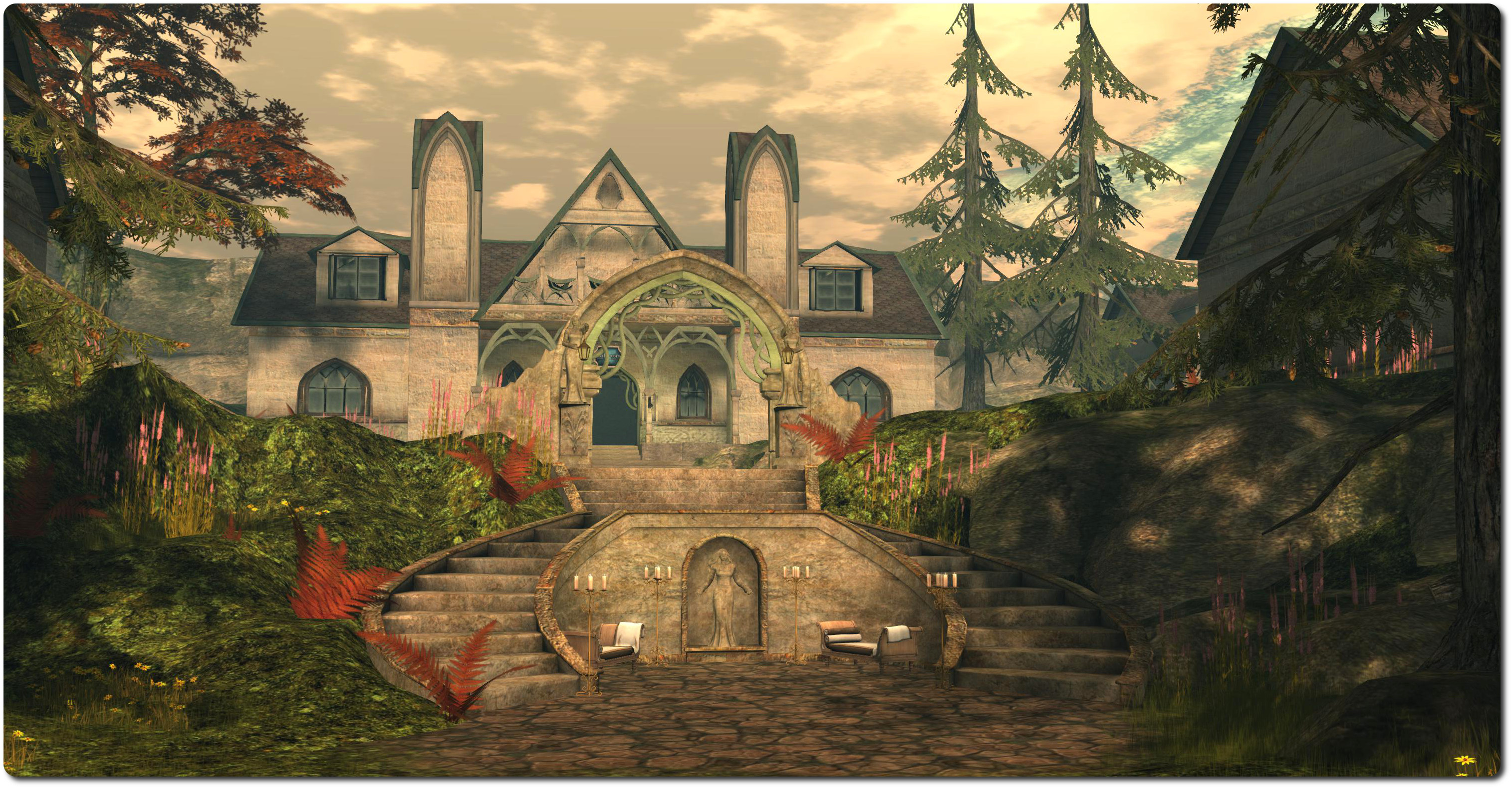 Rynn Verwood’s Medhir Woods lives up to its description of an elven outpost.

For most of us, I’m sure, the mention of elves leads to images of Tolkien’s elven races, proud and tall, surrounded by an air of mysticism and calm, offering havens of peace in a turbulent world of change. And so it is with Medhir Woods. Arriving in the region, particularly when the fairelands are busy, is akin to how it may have felt in entering the valley of Imladris after a long journey; one discovers a place of peace and welcome amidst all the bustle. 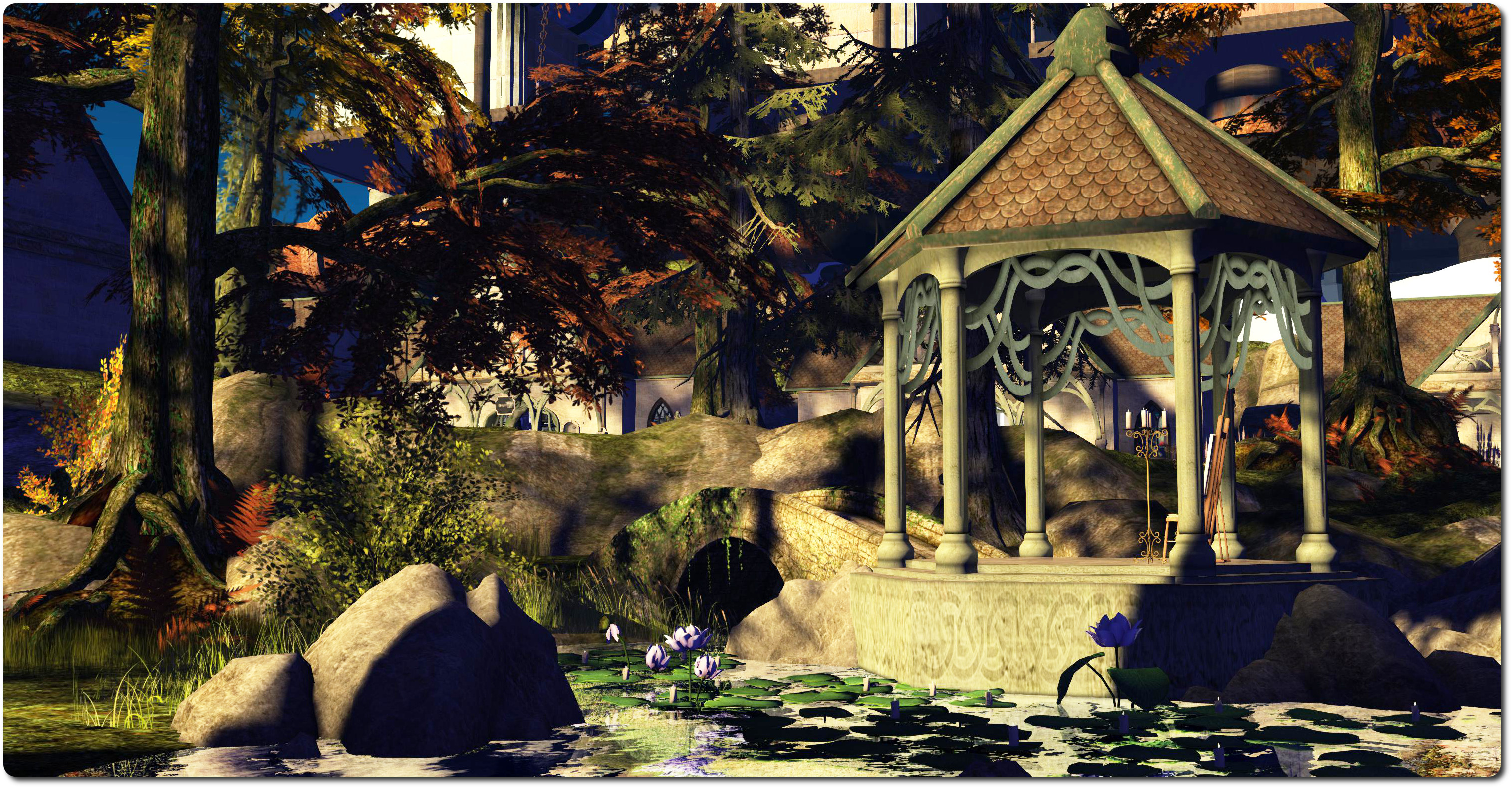 The feel of Middle Earth is unmistakable here as one wanders the streets between the houses. The latter may not be as other-worldly as the designs of elves as imagined in Peter Jackson’s films, but given this is a forested enclave, the buildings have the right elven feel about them. Chimes sound in the wind as one explores while birds call and sing from the surrounding woods, and the ways are lit by lamp-bearing statues with a decidedly elven  look.

Of course, the feeling of being deep within Middle Earth is somewhat heightened by the tall bulk of Hope’s Haven which rises to the north of Medhir Woods. But even without this, when one takes the design here, complete with a slightly misty, perpetual autumnal sun-set, it is hard not to feel as if one is within an outpost from the twilight years of age of the Elves,  when the Dominion of Men has come to the fore. 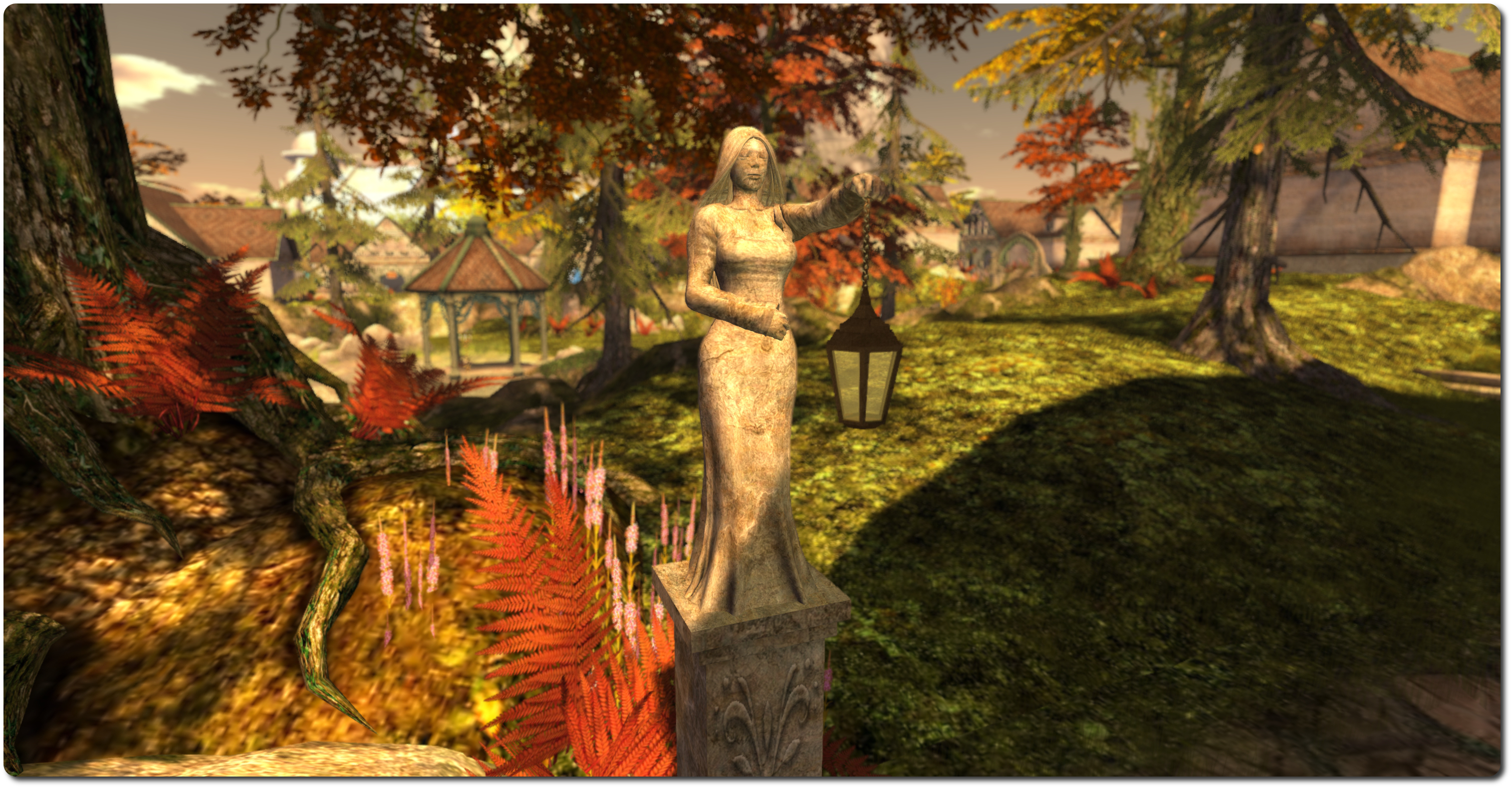 For those seeking further respite from the excitement and rush of the Faire, Medhir Woods offers a place of sanctuary (and also the scene of role-play earlier in the week) even amidst its own calm. This can be found under the arch from the landing-point and down the stone steps. Follow these as the lead to a greensward overlooking the bay around which Medhir Woods sits. Here there are benches located in the arms of the stone stairs, offering a place of rest and contemplation. A small gazebo stands close to shore at the edge of the greensward, reached by a stone bridge, and offers a view westward out over the inland sea.

A photogenic location, Medhir Woods is a delightful setting, one which, for me, stands as a favourite place in which to spend time while at the Faire. 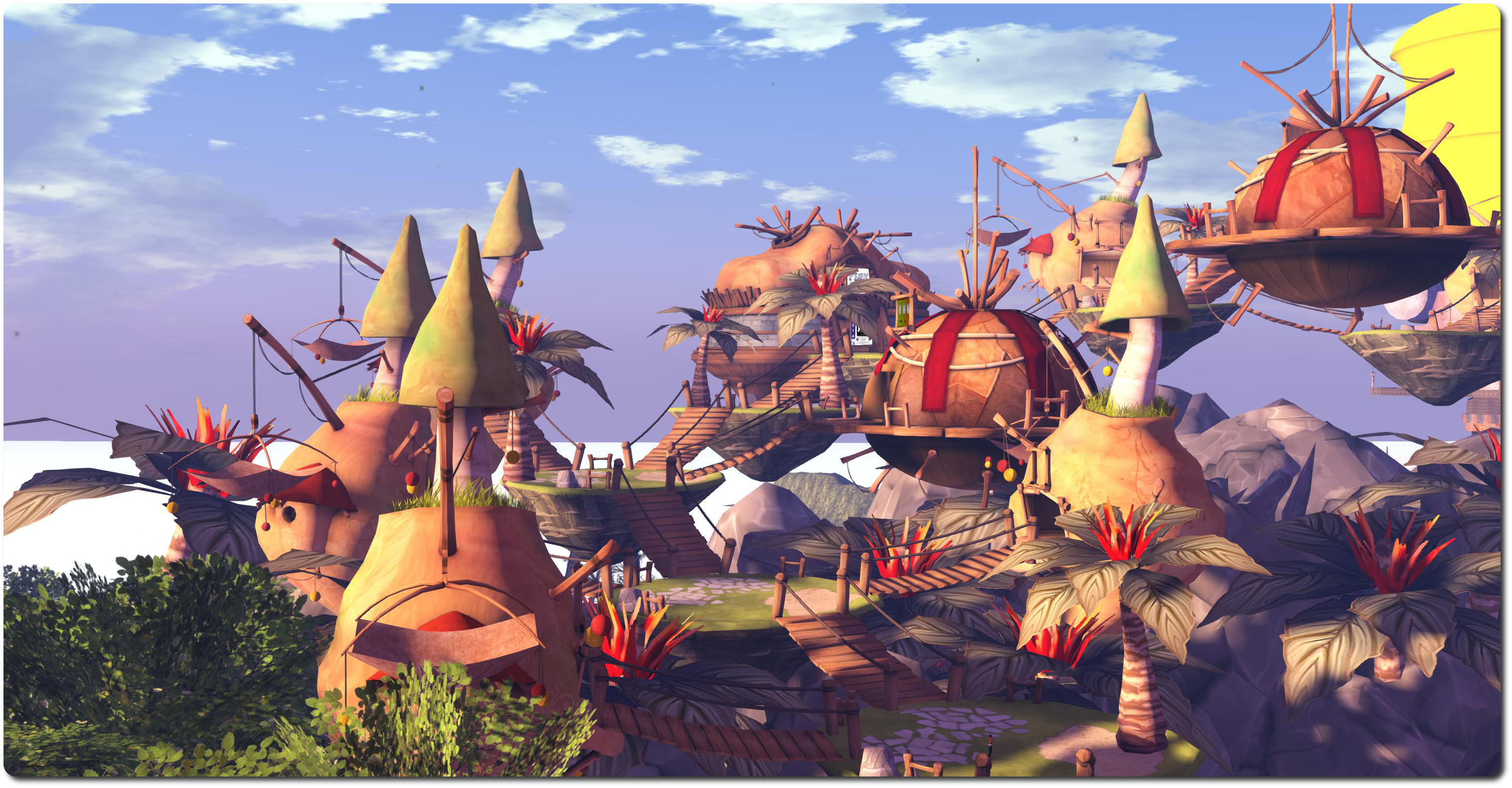 There is something delightfully playful about Kayle Matzerath’s builds for Fantasy Faire. Luminaria, his build for 2013 for example, presented a wonderful and colourful town of winding streets, broad gardens and gingerbread houses and stores. Having stepped into the breach at the eleventh hour after Nya Alchemi had to unfortunately withdraw due to health reasons, Kayle has this year created a place of heartwarming whimsy with Wiggenstead Mooring.

With its floating islands linked by rope bridges occupying the sky over a rocky land filled with great flowers and huddled trees, where water offers a place to bathe or paddle, it’s hardly surprising that the Rickety Weasels established their clubhouse here. One would be hard put to find a more playful environment anywhere in the Fairelands.

Up on the islands, the stores are a whimsical delight, with some looking like tepees, a patchwork of hides stitched together, draped with cloths and held-up by stout poles, others looking as if they’ve been built from dried mud and with mushroom-like growths sprouting from their tops chimney-like. Linking the islands supporting the stores are smaller islands on which sit palm tree-like plants topped with brightly coloured flowers.

Such is the design here, you cannot help but smile as you walk from island to island across the bridges – something which can be as restorative as finding a quiet corner somewhere and simply sitting down. Travel to the south-west corner of the region and you’ll find the Jolly Crocodile.

Here loud-mouthed Fimbleby awaits your challenge and to get you on the road of the Fantasy Faire Hunt. Solve the puzzles here and you’re ready to participate in the second part of the hunt, which takes place in the Palace of Tears – but you’d best hurry if you’ve not already faced Fimbleby; he’ll be packing-up his things and heading home when the Jolly Crocodile closes its doors as the Faire draws to a close on Sunday May 11th (although the Palace of Tears hunt will continue for another week to give you a chance to draw breath and complete all of the hunt). 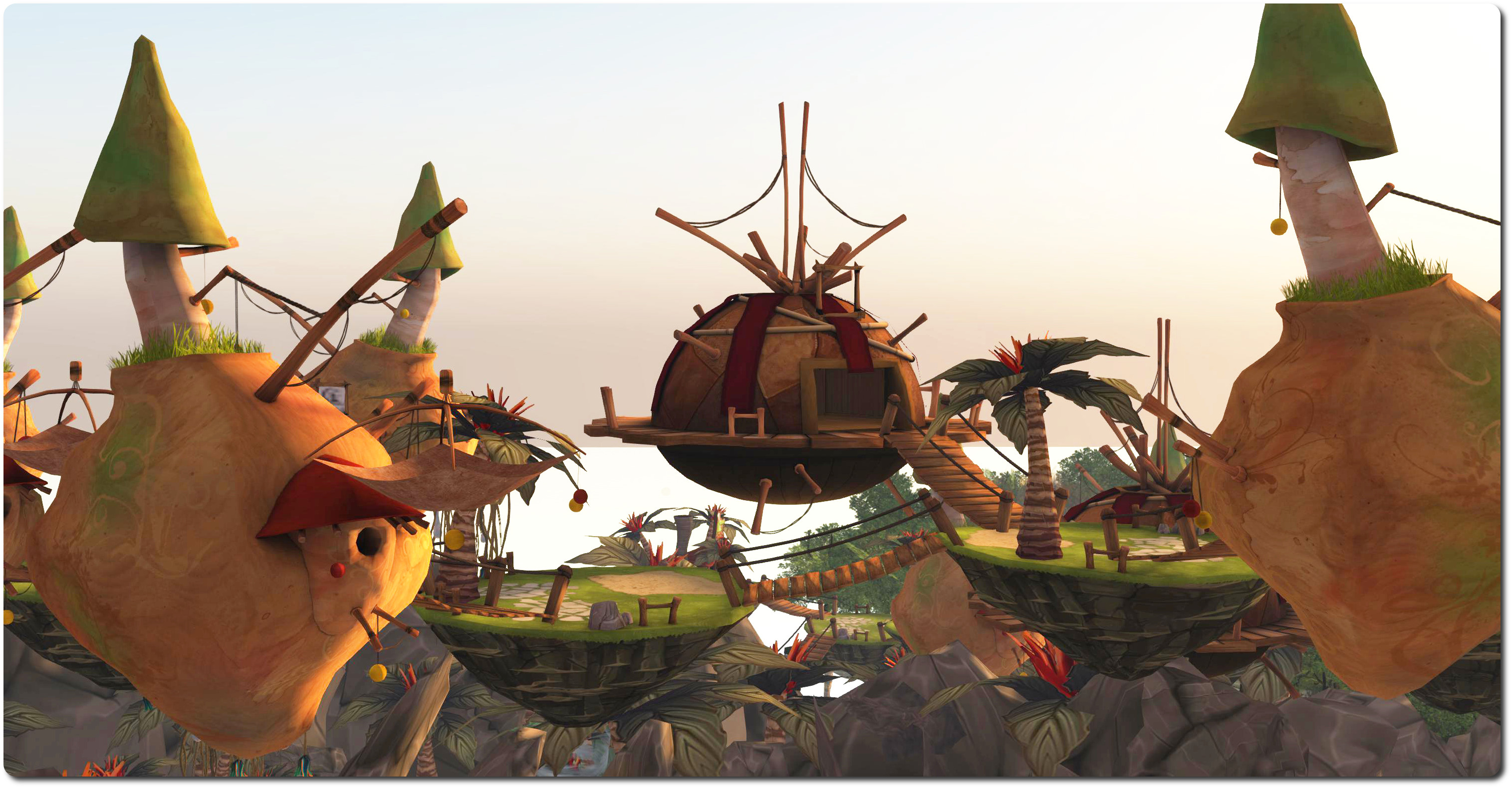 Close to the Jolly Crocodile is a bridge leading down to ground level. Take this and you’ll find paths to explore through the rocks and plants. Deep among these sits the headquarters of the Fairelands Sheriff’s Association, ready to extend the long arm of the law (as they have been throughout the Faire) and ensure the peace is kept. Don’t miss, as well, the little island in the bay on the north side of the region.

If there is a word to be used to sum-up Wiggenstead Mooring I’d likely settle on “fun”; it’s fun to look at and it’s fun to visit and as such, in many respects, it is a visualisation of one of the elements which lay at the heart of Fantasy Faire for all who attend. 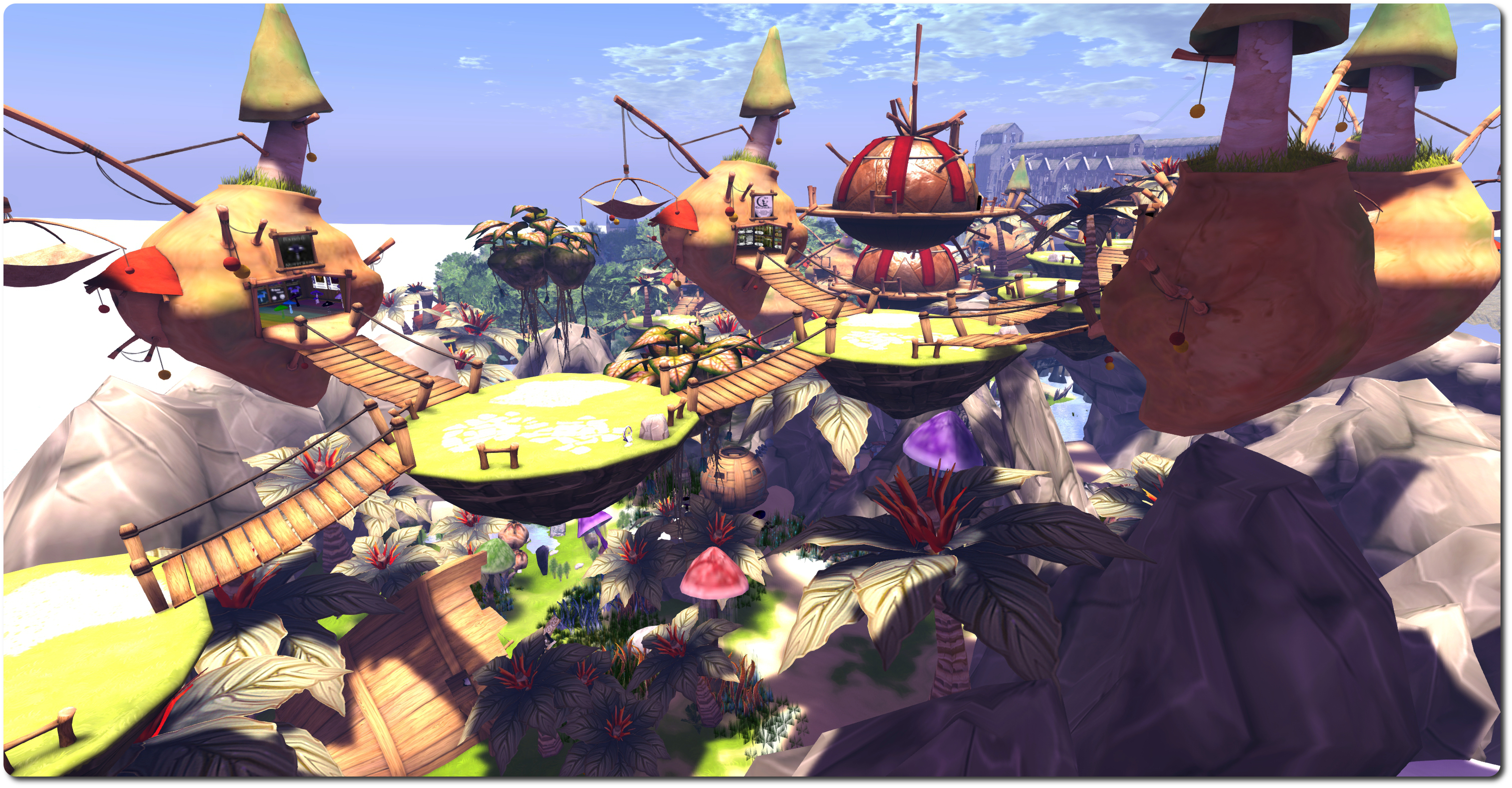