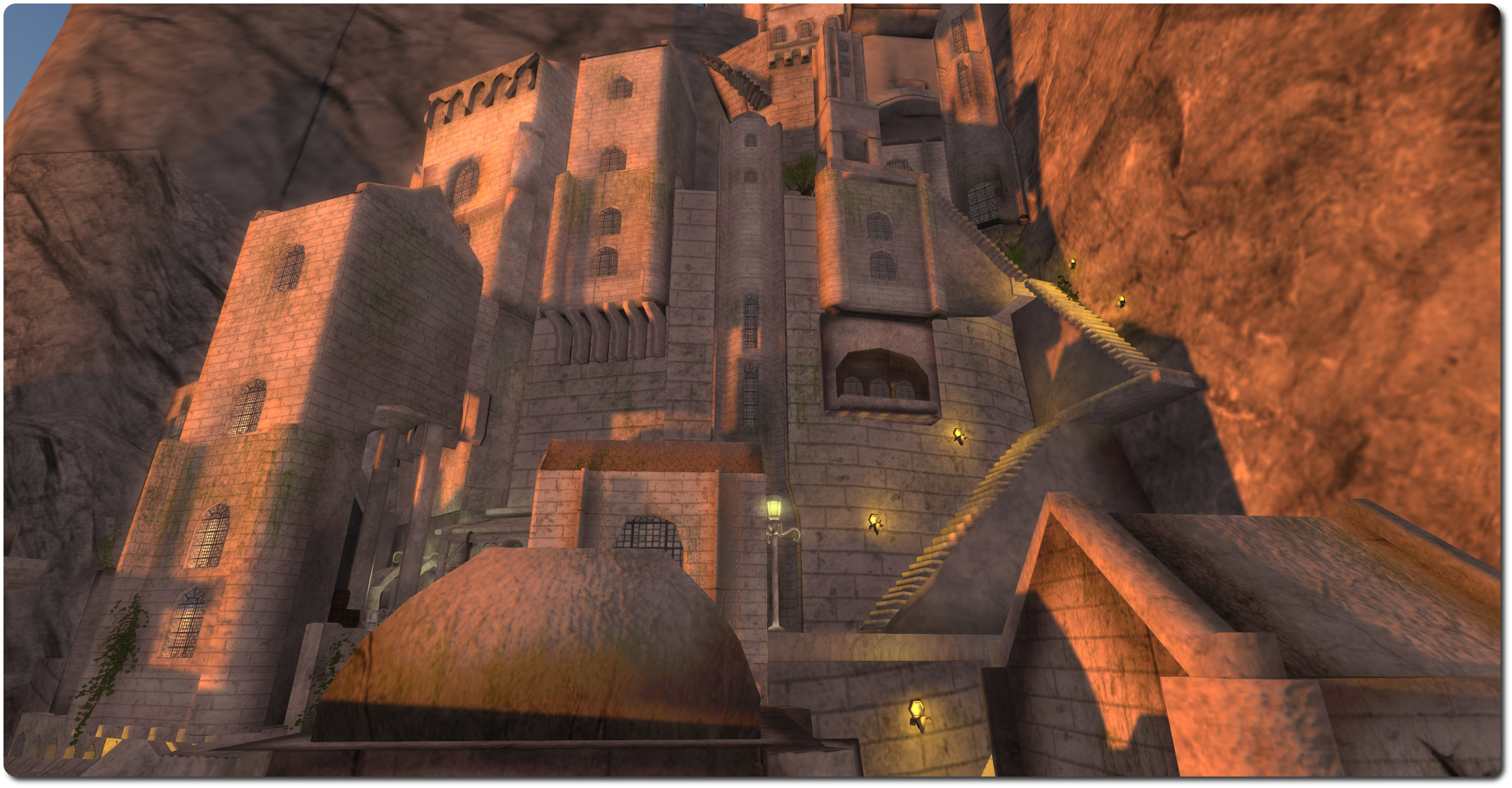 Even as Pippin gazed in wonder the walls passed from looming grey to white, blushing faintly in the dawn; and suddenly the sun climbed over the eastern shadow and sent forth a shaft that smote the face of the City. Then Pippin cried aloud, for the Tower of Ecthelion, standing high within the topmost wall, shone out against the sky, glimmering like a spike of pearl and silver, tall and fair and shapely, and its pinnacle glittered as if it were wrought of crystals; and white banners broke and fluttered from the battlements in the morning breeze, and high and far he heard a clear ringing as of silver trumpets.

– J.R.R Tolkien “Minas Tirith”, Chapter 1 of Book V of The Lord of the Rings

Jaimy Hancroft’s Hope’s Horizon is, for me,  one of the visual high points of this year’s Fantasy Faire. 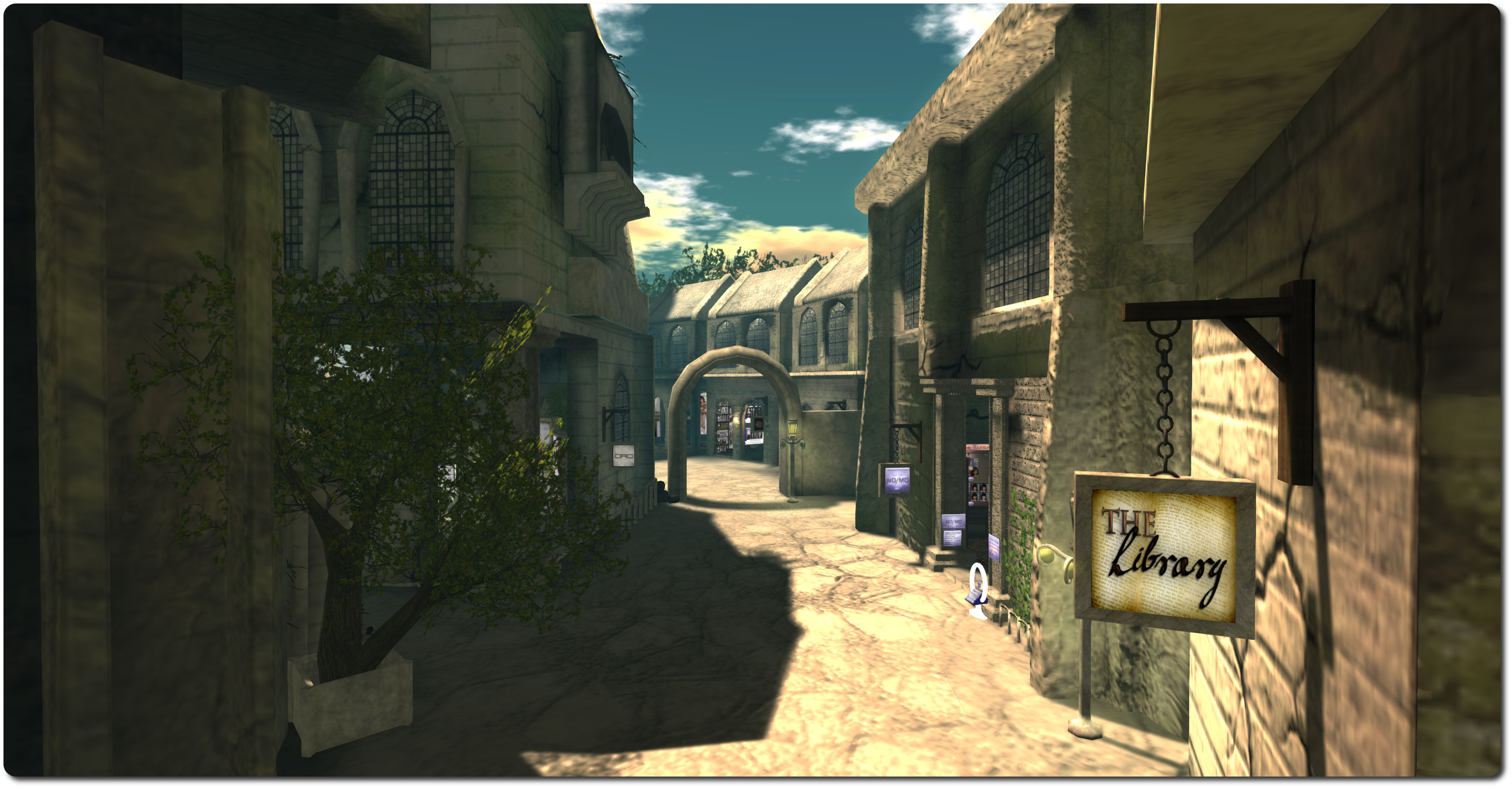 Any tackling of Tolkien’s world-famous mythological fantasy of whatever kind, be it from The Hobbit through The Lord of the Rings to an aspect of The Silmarillion or The Lost Tales, is never going to be easy. Courtesy of Peter Jackson and New Line Cinema et al, in the case of The Lord of the Rings (and now The Hobbit), we have some very clear mental pictures as to how things “should” look which may even have supplanted years of imaginings when reading the books; so any attempt to re-imagine any of the more staple elements from the history of Middle Earth is a gamble.

But with Hope’s Horizon, Jaimy has, despite limitations of scale and space, presented a fabulous homage to Tolkien and the magnificent walled city of Minas Tirith – the Tower of the Guard (or Watch) in the elvish Sindarin tongue.

Obviously, trying to recreate the entire city in an area just 256 x 256 metres in size and which remains large enough for avatars to explore with ease isn’t really possible in SL (unless we all opt for really tiny avatars!), but almost all of the key elements of Minas Tirith can be found within Hope’s Horizon, which still maintains its own identity which allows it to set itself apart from the inspiration behind it and stand as a beautiful build in its own right. 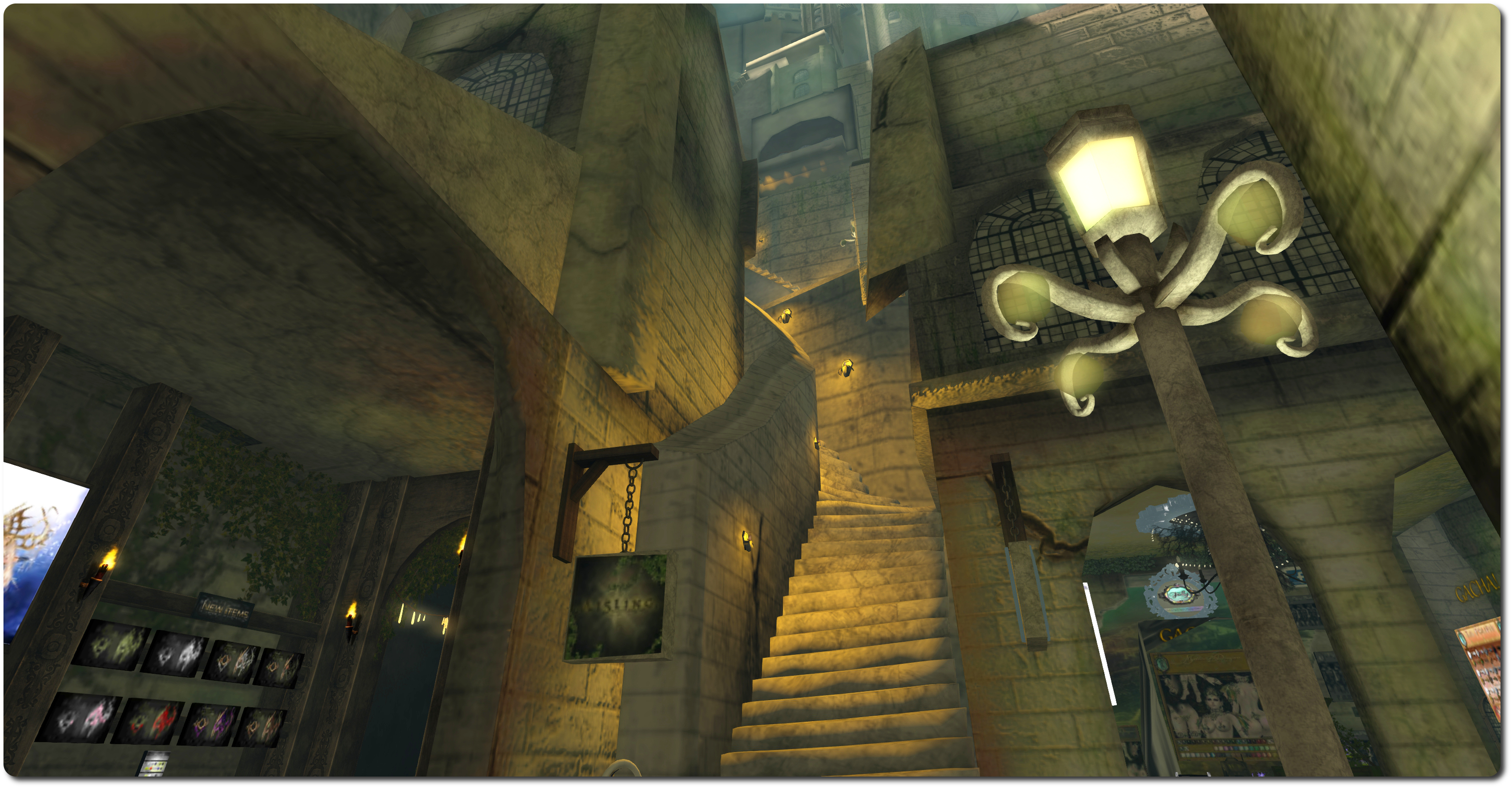 From the arched entrance of the Great Gate, guarded over by the ever-vigilant Dwarfins on behalf of the city folk, one can wander the broad stone streets of the city, lined with shops, then climb slowly up the stairs, level by level, perhaps resting awhile on stone benches or taking time to look down over the lands below. The stairs wind slowly up the shoulder of the hill upon which the city sits, sometimes rising with side walls to prevent you stepping off into space, sometimes clinging precariously to the face of naked rock.

Careful footing is required if you wish to ascend to the top of the high hill. But if you take care and remain sure-footed, you’ll eventually arrive at the Citadel atop the great rock, which has been flattened and paved and where the White Tree stands tall near the far end of the long out-thrust shoulder. 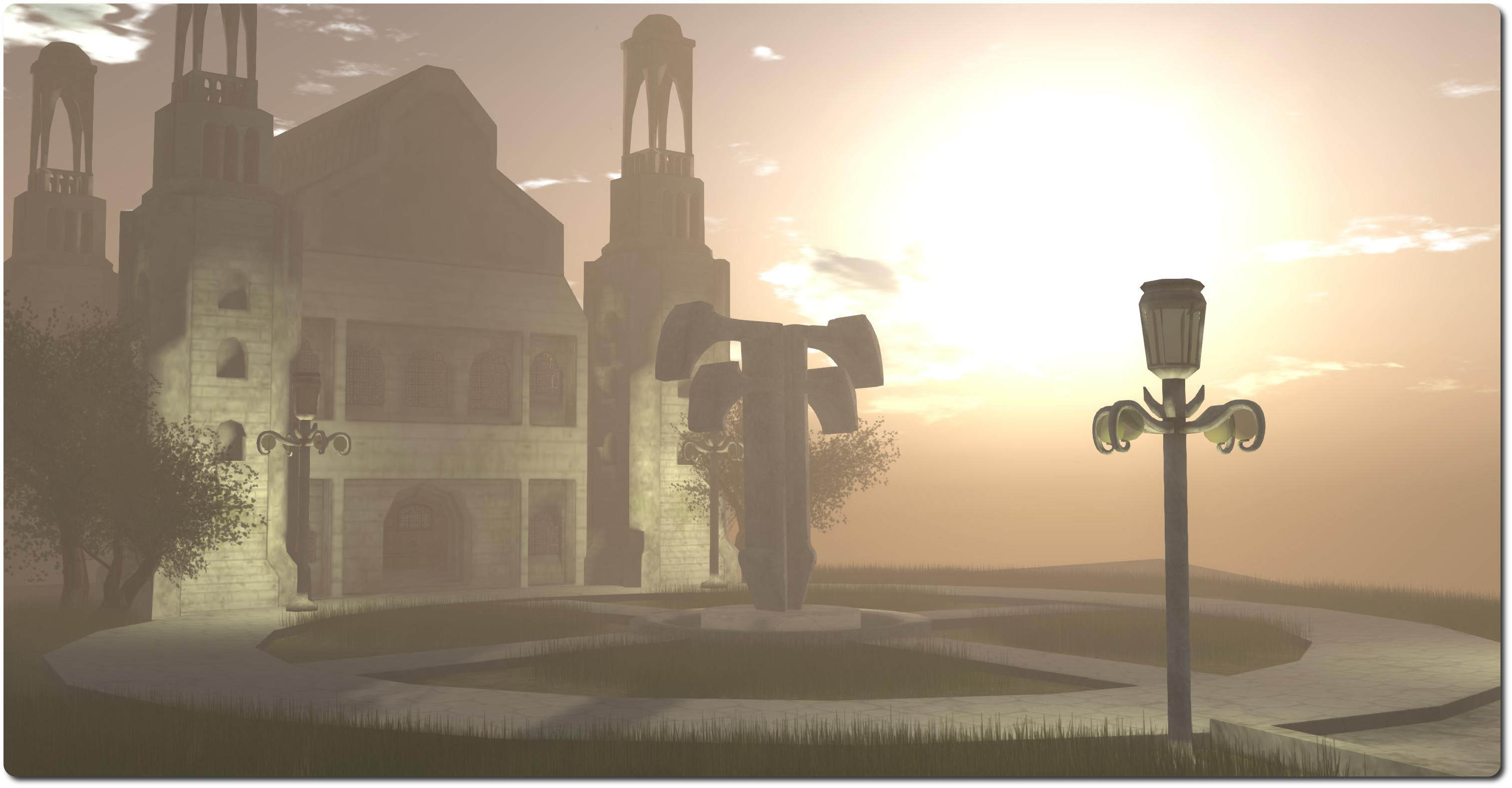 This is more than an homage to Tolkien however; as Jaimy reveals the build is dedicated to her father, a huge Lord of the Rings fan, and who lost his battle with cancer a few years ago. Given the scale and beauty of the build and the way in which it captures the spirit and essence of Minas Tirith, it is a more than fitting tribute. 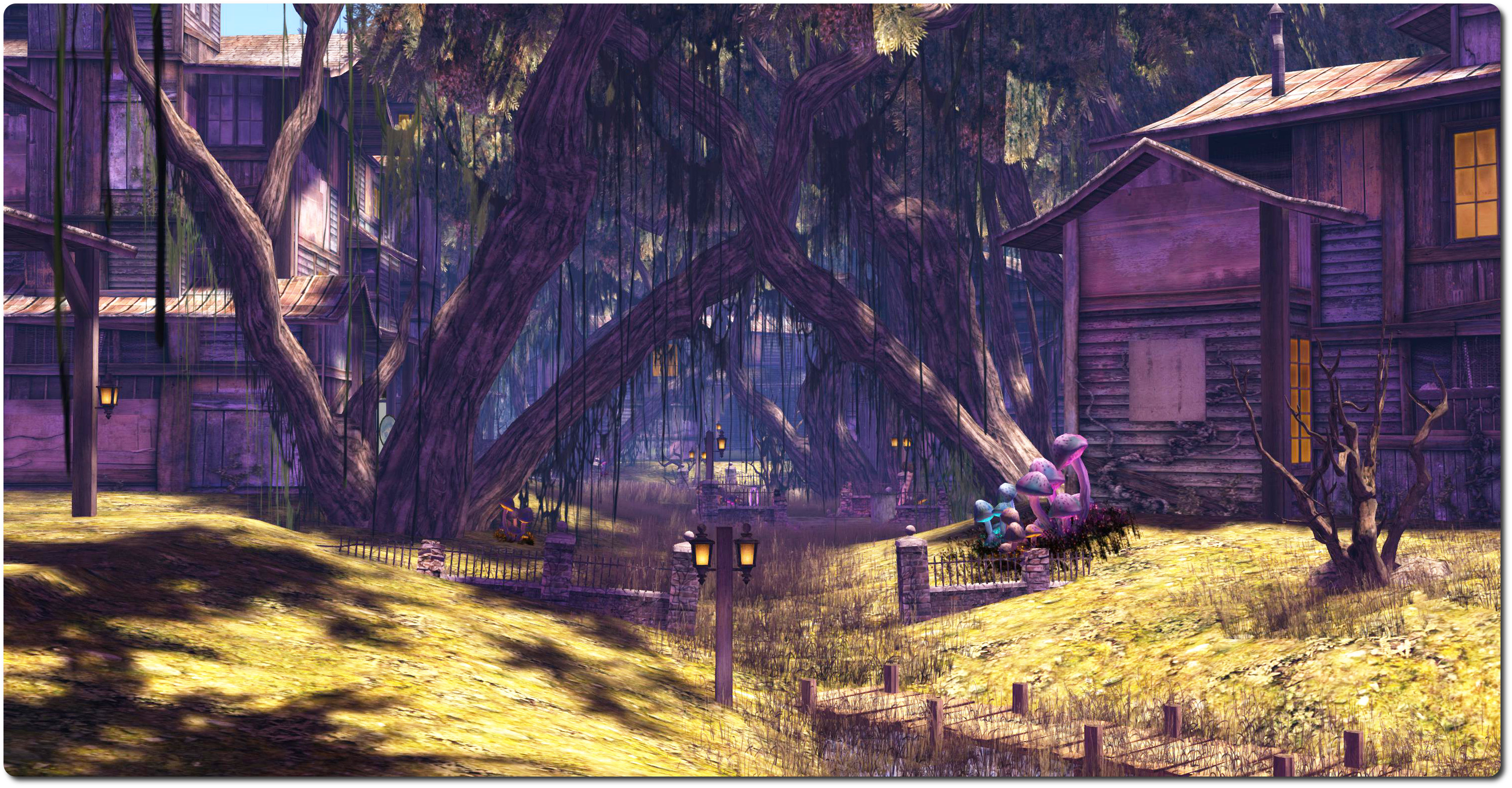 Blackwater Glenn sits away to the west from Hope’s Horizon and is a realm of a very different nature and colour – or perhaps more correctly, colours.

The description of the region doesn’t sound all that encouraging at first reading – talk of decay and swaps and general ruination as nature seeks to reclaim an old town. But this is a region born of the fertile minds of Marcus Inkpen and Sharni Azalee of The Looking Glass fame, and so all is not as it seems.

Yes, there is the encroaching waters and yes, the tall reeds are alive with the chirping of crickets and one is advised to keep to the wooden board walks in places if one wants to keep one’s feet dry; and yes, the buildings are in a state of disrepair. But this is also a place of vibrant colour, which bursts out across the region in the form of multi-hued fungi and plants, new life growing to replace the old, giving a sense of renewal and hope for the future. And anywhere butterflies turn and play in the air can’t be that bad, now can it? 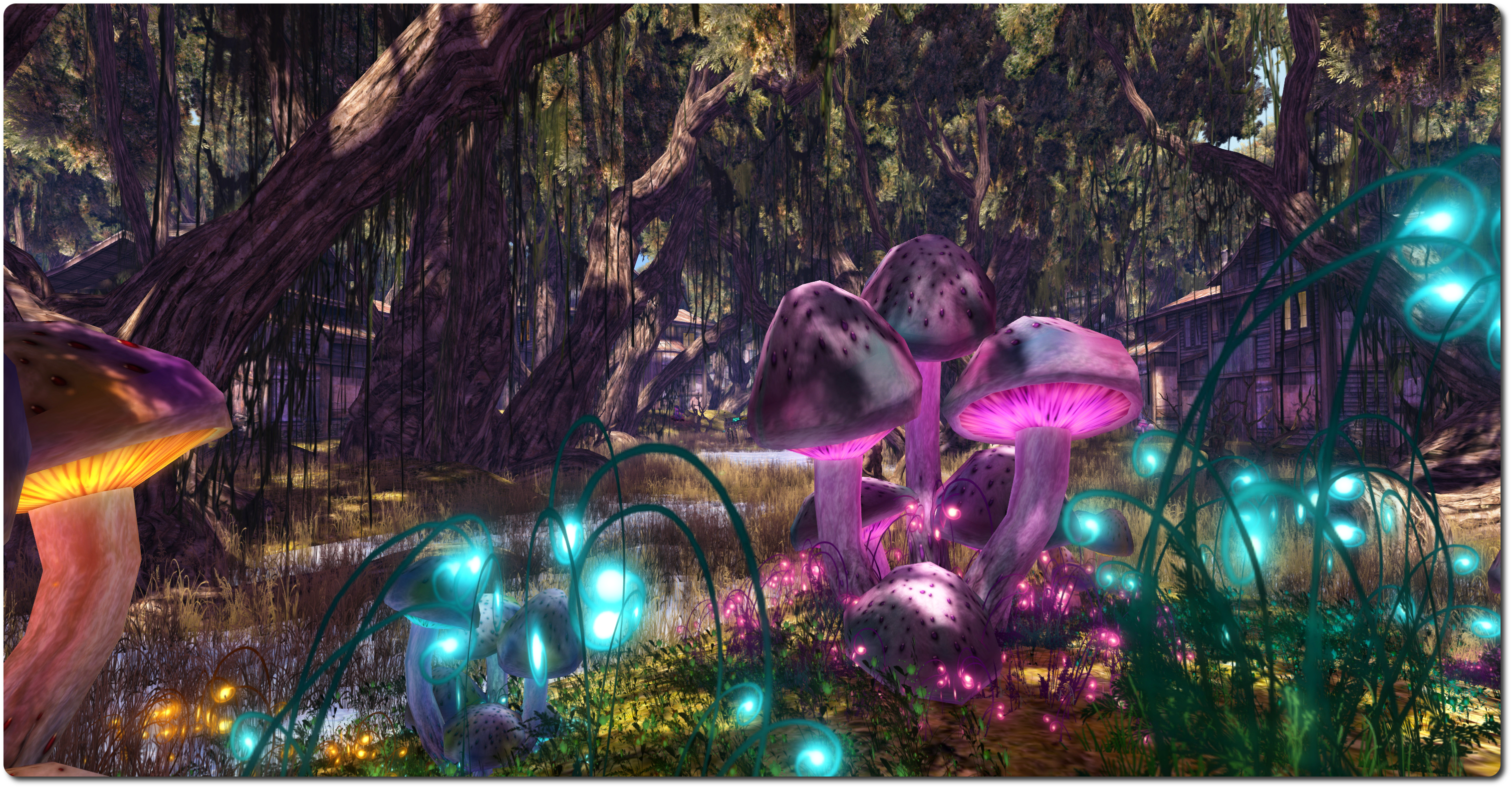 Nor is the place as dank and one might expect. The sun can still shine here and the buildings, although decrepit and aged, retain their own colour such that as the sun falls on them, a sense of welcome surrounds them.

Follow the wooden walks far enough, and you’ll eventually find the Trade Winds tavern, a place perhaps to take a seat and rest a while from the hustle of the Faire and simply enjoy a drink and a chat with the locals. Just keep an eye – or better yet, a hand – on your purse! The tavern was leased by a group of pirates to raise the funds they need to repair their ship in order to sail home. How far they may go to achieve their goal, and whether or not any are still working in or near the tavern is open to question – but just in case some are still around, caution while drinking might be on order! 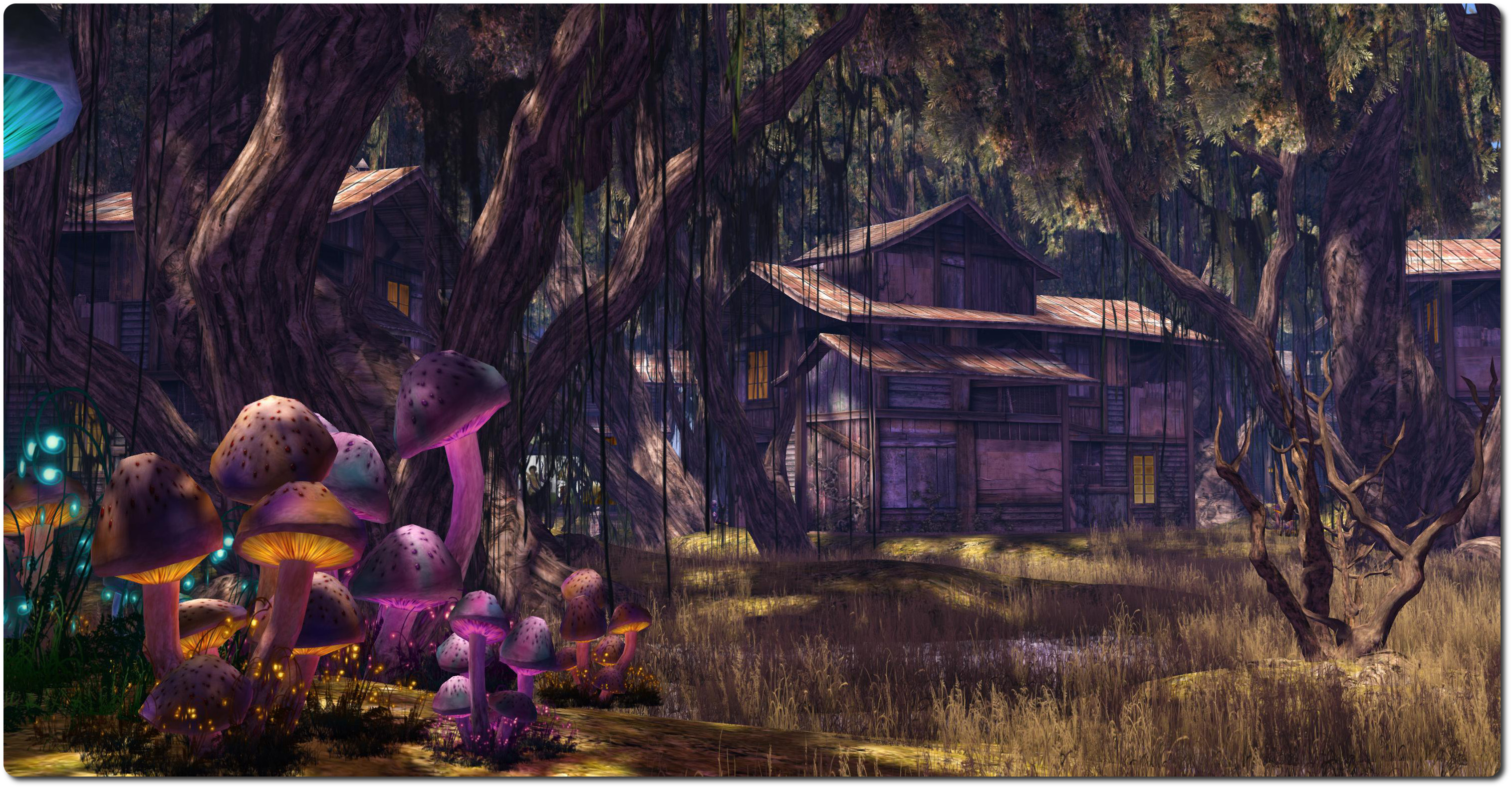 Don’t worry about getting lost as evening turns to night either; lamps light the paths, whether on firm ground all along wooden piers, and the locals will always help a lost soul and point them in the right direction. So don’t be put off by the name or thoughts of pirates, Blackwater Glenn is a place of hidden beauty, waiting to be discovered! 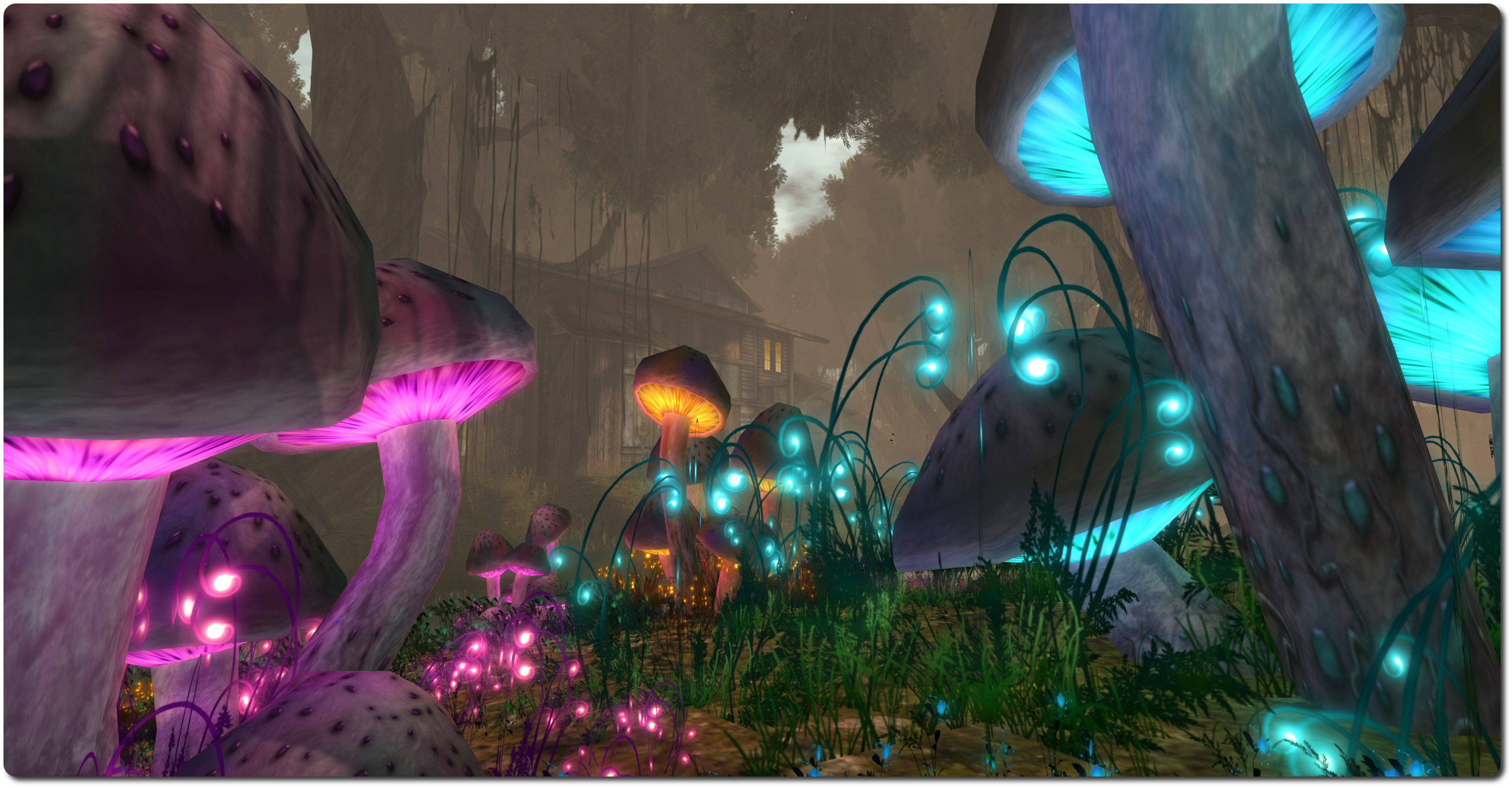 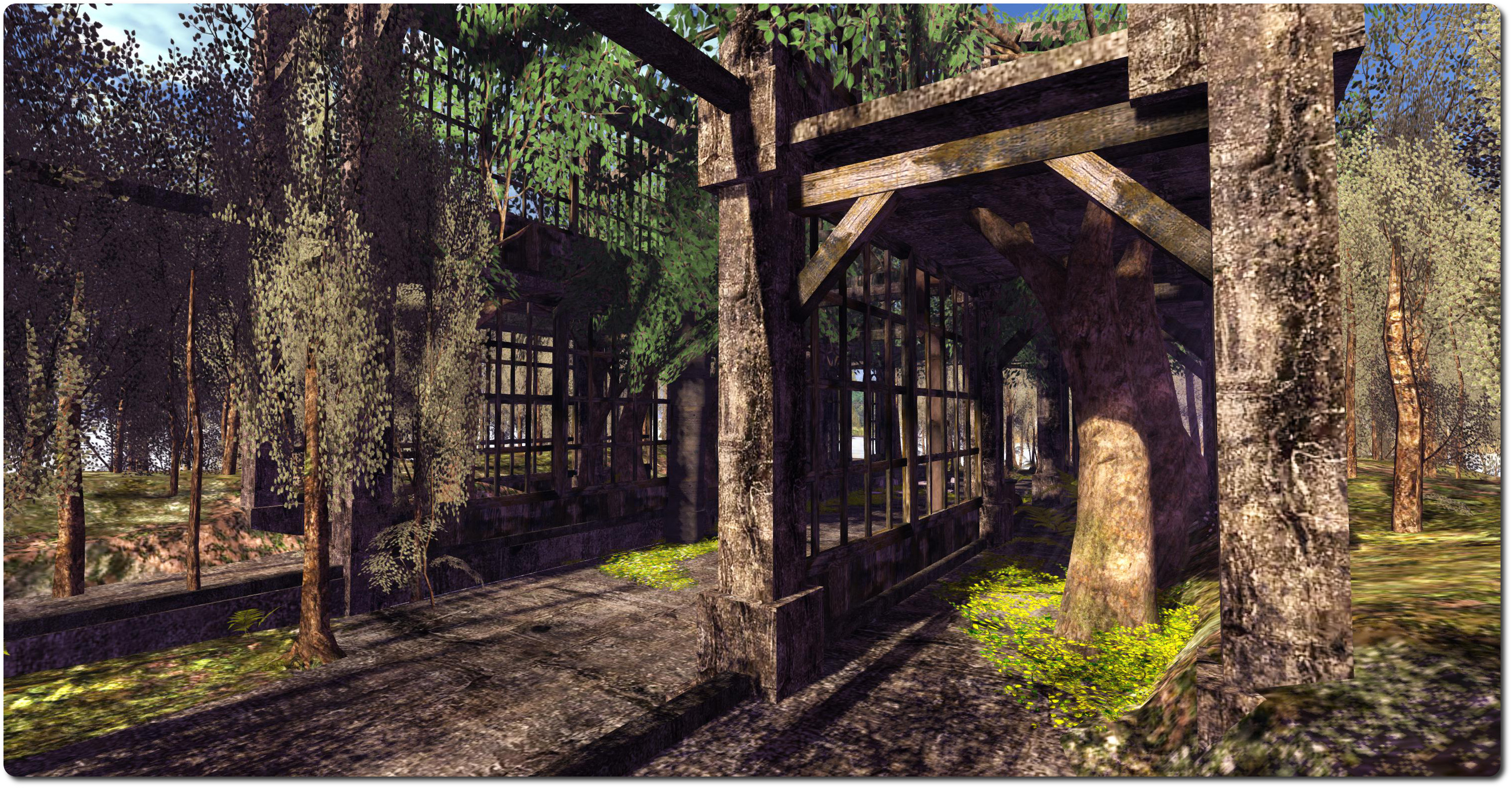 Back in early April, I dropped-in to Ivy Glad  on the Homestead region of Beauty Atoll. Held by the Katz >.< Meow group, the region has been beautifully and artfully crafted by the combined talents of Cipher Silbersztein and Shaw Noel.

Mostly flooded (hence my attraction to the region, given my enjoyment of places with a watery focus), Ivy Glad looks like a lowland area overcome by water, yellow grass still visible above the waves to the south, with areas of higher ground forming islands rising from the surrounding flood. 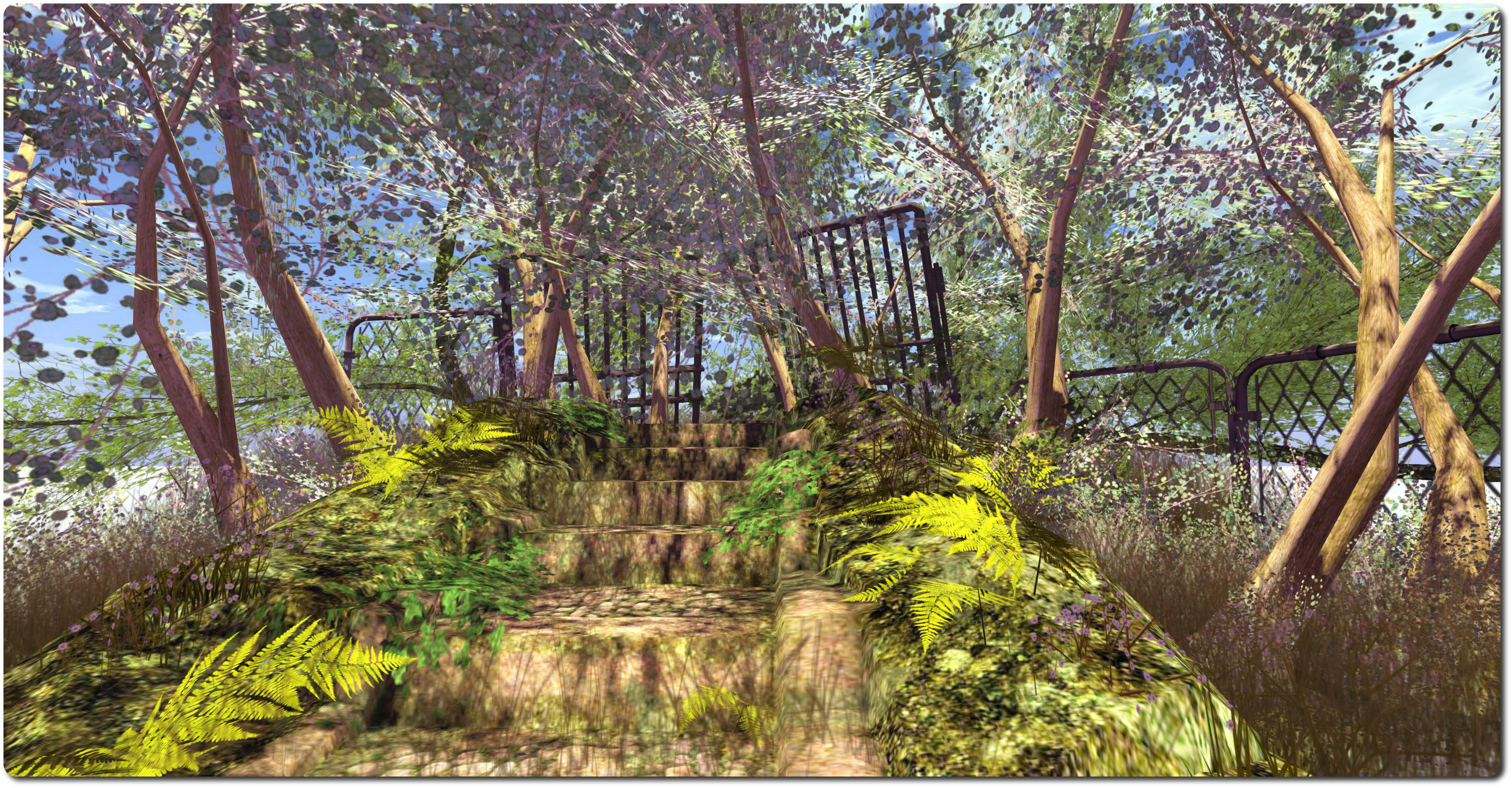 On one of these, slowly being lost from sight in the encroaching woodland, stands what’s left of a large  building, perhaps the shell of some former industrial plant. To the west of this sits a smaller outbuilding, also in a losing battle with nature, some of its windows now without glass, sections of roof gone, and its brick interior now the playground of butterflies. Sitting tied-up alongside a wooden jetty reaching out from this outbuilding  sits the unexpected bulk of a 17th Century sailing ship, mist wrapping itself around her.

To the north-east of the region lies another area of dry land, an old railway track – perhaps a spur line – leading from it and out into the flooded plain. Here are signs of habitation nestled within what remains of another old brick building, its walls now mostly gone. Rocking chairs gently pitch back and forth as stream rises from cups of tea or coffee set before them, rugs and books add a touch of colour and homeliness while an old washstand offers a place for a gardener to work. 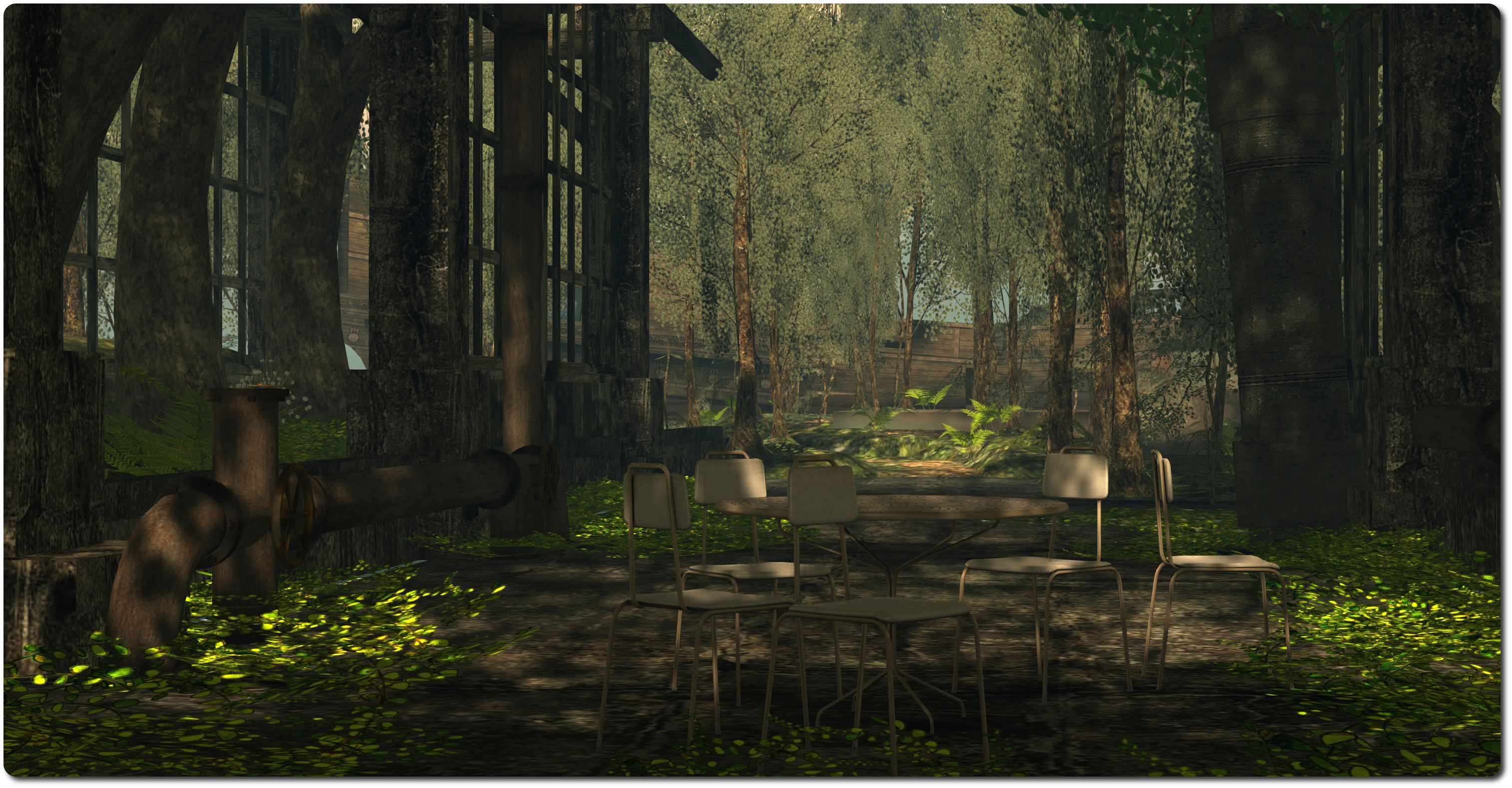 Stories lie throughout the flooded landscape and the structures to be found here, from the ruins on the main island to the great brick arches of a broken bridge and the ivy-hung remnants of a concrete and iron tower, rising from the waters like some lonely sentinel. Then there is the  incongruous presence of the sailing ship, at once a part of the landscape yet at odds with the bricks and concrete and hints of abandoned industry.

For those who simply want to visit and sit and pass the hours, Ivy Glad offers much as well; be it the rocking chairs and rugs mentioned above, the sofas sitting on a small rising amidst the flooded grasslands, or under the great beams of the ruined building, where lie a wrought-iron  table and group of chairs, park benches also not far away. For the romantic, a bed lies atop a sturdy wooden platform on the water, offering cuddle and conversational poses. 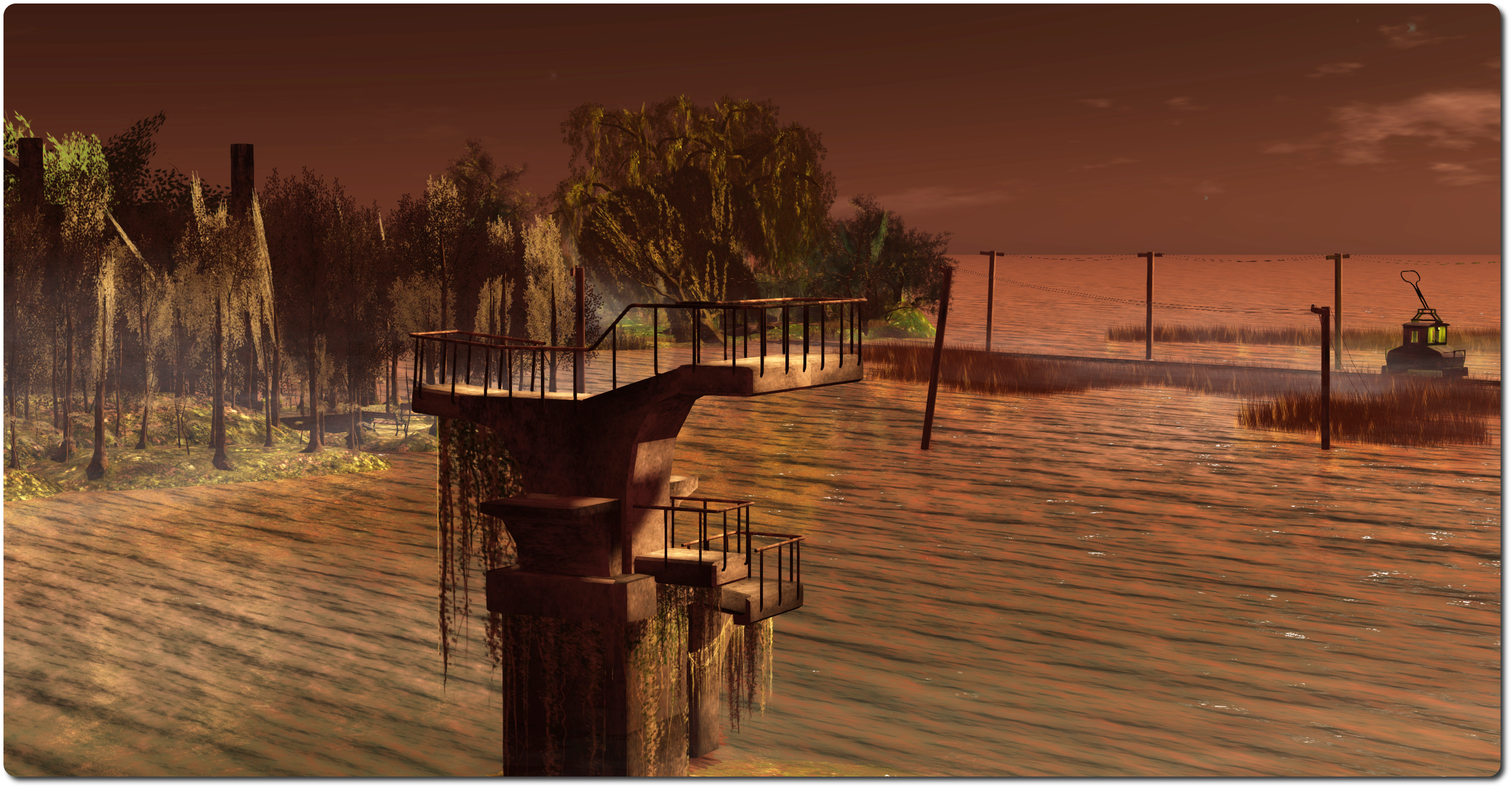 Photographers are well-served here; the layout of the region is wonderfully photogenic and invites one to play with sky and water windlights. For those who need accessories, rezzing is allowed – but as always, do please remember to clean-up behind yourself if you do rez anything.

All told, a lovely and tranquil setting well worth a visit.