A role is something every Dominant adopts, whether it be a “primary” role that defines them as a Dominant, or whether it is a “secondary” role that is adopted specifically to fit a situation, scene or mood. Dominant roles should not be confused with Dominant typology, which is concerned with how a Dominant approaches D/s.

There are no hard-and-fast rules as to what role to take, or how to project it; we each tend to come into those roles that we find most suited to our personality and experience; and there is certainly nothing wrong with experimenting with a number of roles to find out which suit you best, or which you find can be best combined in order to achieve a balance that is rewarding to yourself and your submissive(s).

This role focuses on discipline as the means by which power is exercised. Rules are a major factor in the Disciplinarian’s activities, any infringement of which will result in punishment of one sort of another, be it stringent bondage, corporal punishment or a combination of both. Sexual discipline can also be a hallmark of this role, with CBT and / or chastity devices frequently being employed.

At the extreme end of the scale, the Disciplinarian role may well dip into that of sadism – again, a common trait in SL, but one which is less common than one might think in real life D/s.  Here the role becomes far more capricious: the submissive is subjected to heavy bondage, restriction, isolation and undergoes heavy punishments purely on the Dominant’s whim and with little regard for their own enjoyment. Those with a more domineering attitude and little practical exposure to D/s tend to associate themselves with this role, mistakenly believing it is a sign of “genuine” dominance.

The Controller takes control of the submissive’s Second Life, determining absolutely everything that the submissive can and cannot do, say or wear, generally through extensive use of RLV restrictions. The Controller takes enormous pleasure / power from controlling every aspect of a submissive’s life, and tends to be of the opinion that power isn’t power unless it is being demonstrated, be it through their sub being in some form of constant bondage, or made to wear a specific uniform or trapped in Mouselook. While this can initially be exciting for all parties involved, over time the role can become one-dimensional, and the submissive that initially craves this kind of attention / treatment can become frustrated. Similarly, the inexperienced Dominant adopting only this role can initially gain significant pleasure from it, but can find that being responsible for absolutely everything becomes wearing.

The Power Wielder is similar to the Controller in that they will make decisions and call the shots, but not so overtly or directly as the Controller. Rather than directing what will happen from the start, the Power Wielder may seem to seek opinions, expressing a desire in terms of a question. “Are you in the mood for some public bondage?” might sound like a choice on engaging in a public scene of or is on offer, but a “no thank you,” won’t be considered an acceptable response; rather, the Power Wielder is seeking the submissive’s input on where they might carry out the scene.

The Power Wielder does not necessarily require that their control over the submissive to be always on display through the use of leashes or bondage, etc. The submissive is expected to demonstrate a degree of intuitiveness – knowing what to wear, how to behave, etc., without being commanded. They may even enjoy some latitude in what they can do when the Dominant is not available.

This role is adopted by Dominants who are serene and naturally confident in both their self-identity and in their abilities as a Dominant. They had little need to make demands, snap orders, hand the submissive a set of rules as long as your arm, wield a whip; their power is subliminal – and infinitely attractive. Submissives are naturally attracted to Dominants fully involved in this role and frequently find themselves “obeying” the Dominant even though no orders or requests have been made – merely suggestions. They do so, because making a positive impression on such Dominants is somehow important.

As a more passive role than those described above, the Omniscient One is generally deeply intuitive, and can frequently read between the lines when conversing with a submissive, almost as if they’re reading the submissive’s mind. Knowledge is power here, and explanations may not always be fully forthcoming when managing a scene or situation; rather it is expected that those around them to work things out for themselves.

Such is the confidence usually commanded by the Dominant at home in this role, that Dominants with a Switch personality will frequently submit to them, simply because of the levels of trust and confidence they inspire.

The Goddess role represents the unobtainable, the ultimate desire a submissive wishes to reach, but believes they never can. The role involves keeping the submissive at a distance, keeping them yearning and striving, and only allowing them small pieces of the Dominant, never the whole. This role is frequently adopted by Dominants when they are seeking a submissive, it is a role that is intensely alluring to submissives and can set the Dominant comfortable in the role head-and-shoulders above others. It is also a role that, while it can be maintained in and of itself in more casual relationships, tends to segue into one of the other primary roles – particularly that of the Omniscient – as a specific Dominant / submissive relationship deepens.

The Nurturer places the well-being of their subs first and foremost; generally appearing unassuming and thoughtful. The role involves encouragement and gentle teaching – the nurturing and growth of submissives being the driving force. The Nurturer is often as much a friend and confidante for those around them as they are Dominant, reflecting some of the characteristics of the Omniscient One in this respect. The role may also tend to overlap with the more active roles of Controller and Disciplinarian, which can surface when undue wilfulness is shown on the part of a submissive, or where sterner lessons need to be taught. 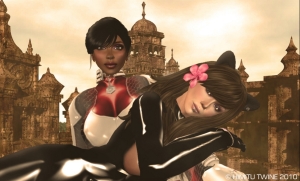 The Sensualist focuses on the physical pleasures of sexuality and the heightened response generated by arousal. A Dominant engaging in the Sensualist role tends to thrive in witnessing the submissive’s responses to their overtures and in controlling the submissive’s levels of arousal, playing them almost like an instrument. Teasing sexual arousal and orgasm denial are common tools of the Sensualist. While bondage and restriction may be involved, the function of any bondage involved is to enhance the submissive sense of vulnerability and helplessness, rather than to instil any feeling of forthcoming punishment. The Sensualist will manipulate and torment the submissive gently, their own arousal and satisfaction increasing as the submissive’s own arousal / frustration / enjoyment increases; generating a powerful dynamic that can be satisfying to both in and of itself, or which can counterpoint other active Dominant roles within a scene for even greater excitement and satisfaction.

Like the Sensualist, the Tease enjoys getting their subs aroused and draws confidence and pleasure from knowing they are the object of desire for the sub. The role is slightly more one-sided than the Sensualist, as it is more focused on teasing the submissive for the Tease’s own enjoyment rather than in mutual arousal and feedback.

Within SL, the role of the Tease can be quite common in open role-play Groups and areas where “casual” play can be found, the role being readily adopted by Dominants looking for a little light fun and their own enjoyment. In these situations the Dominant may well take a willing submissive through an escalating scene – and quiet possibly knock them down once the Dominant’s needs have been satisfied, regardless of the submissive’s own state. Nevertheless, it is because of their deft manipulations, that the Tease may well be a strong object of attraction for a submissive.

As mentioned earlier, there are no absolutes with the roles a Dominant may take – that can ebb and flow through scene and situation. While it is common for Dominants to settle into a specific primary role, and accentuate it through the adoption of secondary roles and / or elements of other primary roles, it is not unusual for a Dominant to adopt different primary roles during their time in SL. Nor are any roles any more or less linked with any of the “types” of Dominant I’ve written about elsewhere: the casual Dominant can adopt the role of Disciplinarian or Controller just as much as the lifestyle Dominant. It really comes down to the manner in which the Dominant engages with others in SL, and which role(s) particularly suit their personality / the environment they prefer operating in.

Image credits: “The Disciplinarian”: ‘Damalya’; “The Controller”: unknown ; “Omniscient One”: “The Throne, by ‘Lornah’; “The Power Wielder”: ‘Stripbtch’;  “the Goddess”: “Daughters of Night” by ‘PhoenixKarr’; “The Sensualist” and “The Tease”: Himitu Twine;