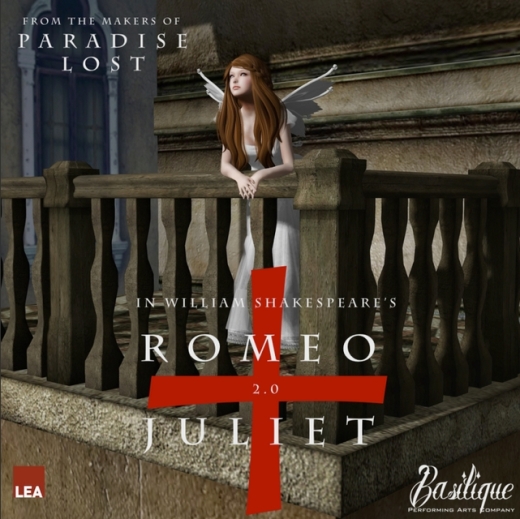 I’ve been following the work of the Basilique Performing Arts Company for a while now, and with good reason. Their work stands at the forefront of performing arts within Second Life featuring ambitious, cutting-edge productions which engage and enthrall. So much so that their masterful production of Paradise Lost: The story of Adam and Eve’s original sin, which runs through until the end of June, is completely sold-out.

Now comes word that their inaugural production, Romeo+Juliet, is set to return for a special 3-date early summer season, ahead of a full 2014 season’s run commencing in August.

The three special performances come courtesy of the Linden Endowment for the Arts, and will take place in a purpose-built setting on LEA14, designed and built by the production’s directors, Canary Beck and Harvey Crabsticks.

The centrepiece of this is the playhouse where the performances will take place, located on a high plateau and surrounded by lush countryside. Around this lay four locations central to the unfolding story of tragic love: the town of Verona; the Capulet mansion; Mantua, the place to which Romeo retreats when the Prince proclaims him to be exiled from Verona, and the Capulet’s chapel, wherein the two lovers are reunited in death.

Visitors to the region are invited to explore the various settings, either before or after each of the performances, or any time on days when no performance is scheduled. Signposts have been placed throughout to help guide people between the various locations.

As the name suggests, Romeo + Juliet, which I reviewed here, presents Shakespeare’s famous play about star-crossed lovers in a brilliant mix of renaissance-inspired sets, 1940s costumes, and contemporary music from the likes of Nat King Cole, Ewan McGregor and Nicole Kidman, Michael Buble, Jack Black, Carl Douglas, Queen and more. With a nod towards Baz Luhrmann and a rich weaving of music and dance as the means by which the unfolding story is largely told, the production is unique and fully engages the audience.

For the performance at LEA14 and the upcoming full season, Romeo+Juliet hold something special for audiences. “We’ve completely remastered it from the ground up,” Canary told me when she contacted me to let me know about the LEA dates. “We have redone the show with the new techniques and technology that we’ve learned as a result of Paradise Lost, and it’s better for it.” Hence why the new production has a “2.0” in it!

So even if you enjoyed Romeo+Juliet during its original 40-week run in 2013, this production is still not to be missed.

The LEA14 performances are all free to attend, but audience numbers are limited to 20 per show, with seats allocated on a first come, first serve basis.

The three LEA14 performances will take place as follows (all times SLT):

Do be sure to mark your diary and to attend at least one; I can guarantee you will not be disappointed.